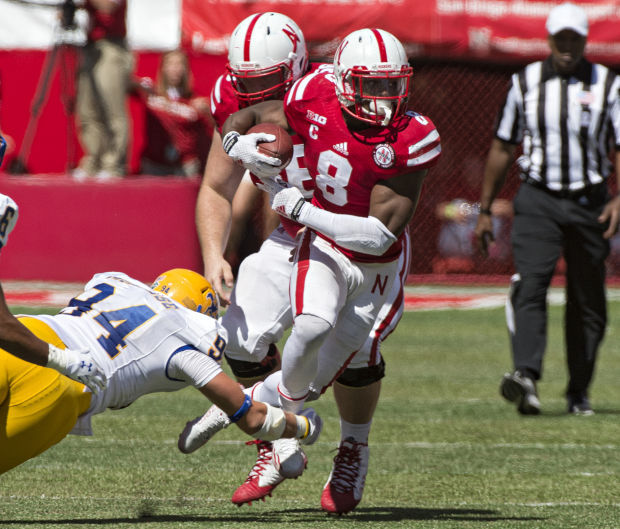 Nebraska running back Ameer Abdullah (8) steps away from McNeese State defensive end Everett Ellefsen (94) to score with 20 seconds left in the fourth quarter to score the winning touchdown at Memorial Stadium on Saturday, Sept. 6, 2014. 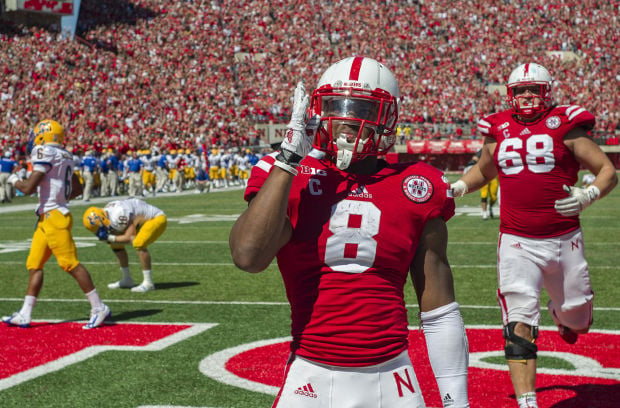 Nebraska running back Ameer Abdullah (8) celebrates his touchdown with 20 seconds left in the fourth quarter to give the Huskers a 31-24 victory over McNeese State at Memorial Stadium on Saturday, Sept. 6, 2014.

The "GR8 Escape" had no one feeling particularly great, not even the man whose individual brilliance kept a state from a week’s depression and a program from being the day’s punch line.

Ameer Abdullah, tired of four quarters of nonsense, looked like a man who had had enough when he bounced off about five defenders, like some sort of video-game character, taking what would be a 3-yard play for most mortals and turning it into a 58-yard piece of art, one of the most incredible game-winning touchdowns you’ll see.

Problem was, this game-winning touchdown, arriving with just 20 seconds remaining, came against FCS foe McNeese State, allowing No. 19 Nebraska to pull out a 31-24 win that wasn’t supposed to be this sort of high-wire act.

The coach could have done without most else of what he saw Saturday, saying he was “pretty disgusted with our football team.” So was the man who rescued the Huskers from a calamitous outcome.

In the locker room, Abdullah told teammates that their performance, and the preparation that came before it, wasn’t acceptable.

“I hold this team to a very high standard,” he said. “I have a lot of respect for McNeese State, but I believe we are a better ballclub than them. We didn’t respect the game. McNeese State doesn’t care who they are playing, they respect the game. But I expect us to take our game to the next level next week.”

Abdullah, held to 54 yards on 17 carries by a defense that last year was 83rd in the FCS, had little room to operate all day, having to get most of his yards (three receptions, 96 yards) in the passing game.

A dump-off pass turned into a highlight any Heisman Trophy winner would be proud to have.

“Didn’t realize I broke five tackles, but glad I did,” Abdullah said. “The football gods were definitely on our side today. We got very lucky.”

“Just like Ameer said early in the week, we’re not good enough to take anyone lightly,” Mitchell said. “We’re not there. We’re not even close. All we can do is bring it at practice, and just not talk about it, be about it.”

Perhaps most alarming, Abdullah said he didn’t feel his team respected the game this week.

“Football is a game that I love, that I have a lot of respect for, but the respect as a whole from the team needs to go up,” the running back said. “Respect of the opponent, respect of our game plan, taking it seriously, and just executing. That all goes into respecting the game. I feel like our level of respect for the game this week was not good enough. It definitely showed. That’s on me as a captain. I have to assist that as the week goes on. I was reluctant to say something … but I promise that it is the last time it will happen.”

McNeese State is hardly the type of FCS team you want to fall asleep at the wheel against. That was clear in the fourth quarter, when the Cowboys were 2 yards from taking the lead in the final five minutes.

Winner of 10 games a year ago, and having FBS transfers at key positions, McNeese State beat South Florida of the FBS 53-21.

And with 4:21 left, after tying the game on a 24-yard field goal, the Cowboys had plans of adding an even bigger fish to their wall.

Nebraska’s offense, a week after putting up 784 yards against Florida Atlantic, had basically disappeared, only getting two of its 17 first downs in the second half.

“We didn’t execute,” Pelini said. “We had plays in the passing game. They dared us to throw and we didn’t throw. We had opportunities and we had some drops. We had balls that weren’t thrown right. And in my opinion, we got outcoached.”

A 14-point swing in favor of the Cowboys didn’t help matters.

The Huskers looked like they were on their way in the second quarter, threatening to score inside the McNeese State 10-yard line. But quarterback Tommy Armstrong made a misread on a play, throwing the ball right to defensive back Aaron Sam, who weaved his way 98 yards for a score.

Though scoring the next 10 points to take a 24-14 lead into the fourth quarter, the Huskers never seemed to regain dominance after the miscue.

“We just got flat,” said right guard Mike Moudy. “A lot of guys kind of went inward, and went into the cave and shut down. The thing is, you’ve got to understand, it’s resilience under negative circumstances that we really need to work on. If something goes negative, if guys are yelling at people, you have to take that play and remove it. … You can’t let one bad play lead to the next one, because it’s a snowball, and it will just keep rolling and rolling.”

Pelini felt his team was lucky to win.

“We got outcoached and we got outplayed.”

Thankfully for the Huskers, they still had the best player on the field.

Ask Husker running backs coach Ron Brown what made Abdullah’s play most impressive? Perhaps the fact that it came after the kind of statistical game that would have some players sulking on the sideline.

“A lot of guys would have been pouting around because they didn’t have a whole lot of yards rushing,” Brown said. “But that’s not what he’s all about.”

Is Nebraska the team that blasted Florida Atlantic? Or the one that edged McNeese State? The truth lies somewhere between, Steven M. Sipple writes.

As far as running backs coach Ron Brown was concerned, Abdullah's brilliant run was the best play he's seen so far in the Ameer Catalog, which the coach says runs pretty deep.

McNeese State might have given opponents a blueprint for how to defend Nebraska, Steven M. Sipple writes.

Ameer Abdullah was watching the Husker heartbreak from a distance. While going through his rookie season with the Detroit Lions last year, he …

Saturday's college football action between McNeese State and No. 19 Nebraska at Memorial Stadium.

Running back Ameer Abdullah talks about the offense's performance in Nebraska's 31-24 win against McNeese State on Saturday, Sept. 6, 2014. GW…

Nebraska running back Ameer Abdullah (8) steps away from McNeese State defensive end Everett Ellefsen (94) to score with 20 seconds left in the fourth quarter to score the winning touchdown at Memorial Stadium on Saturday, Sept. 6, 2014.

Nebraska running back Ameer Abdullah (8) celebrates his touchdown with 20 seconds left in the fourth quarter to give the Huskers a 31-24 victory over McNeese State at Memorial Stadium on Saturday, Sept. 6, 2014.