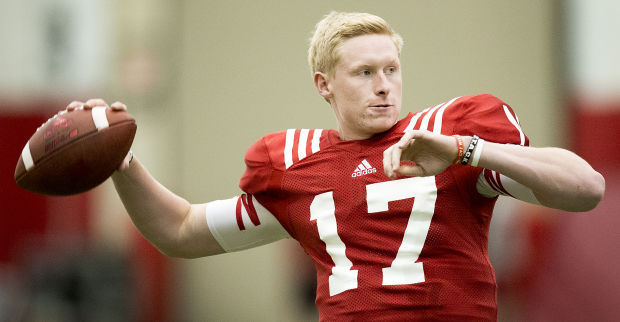 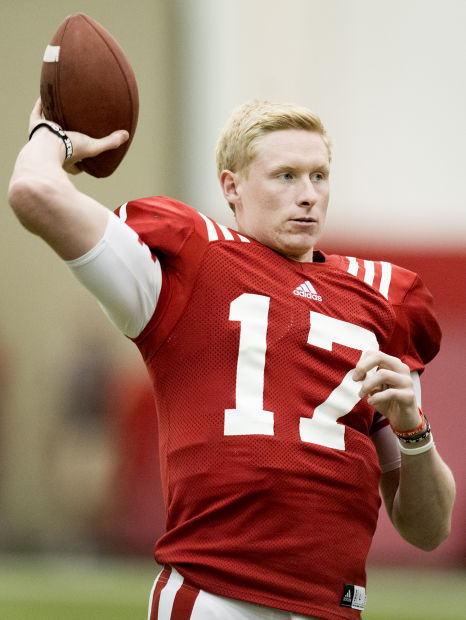 This might describe Ryker Fyfe, who sometimes has the word "gangly" appear before his name, because he is the 6-foot-2, 210-pound guy from the neighborhood you write a feel-good story about in the spring and people say, 'Ah, that's nice.' And it's generally assumed it's nothing more than a headline for April. Surely not August. Surely not.

Yet here was the guy from the neighborhood coming off the practice field late Monday -- after a highly competitive throw-the-ball-at-the-crossbar contest with Kenny Bell -- and being waited out by a circle of reporters.

It's August. It's serious now. Fyfe is still a story. It's become quite clear he's Nebraska's No. 2 quarterback entering the season, only behind Tommy Armstrong. And it's just as clear upon talking to him that he has no plans of going away anytime soon.

He decided this a while ago, actually.

Confident without treading into the territory of cocky, the sophomore from Grand Island doesn't seem all that interested in the cuddly walk-on storyline that is so often placed on a case such as his.

Fyfe's biggest surprise after throwing for 1,921 yards, running for 746 and having his hand in 34 touchdowns as a high school senior? How few programs even gave him notice. Only Nebraska-Kearney put a full scholarship on the table.

"It does fuel your fire, you know. Coming out of high school I thought I was going to have a bunch of offers."

Back on signing day of 2012, when Fyfe was picking his school, the Huskers had only Taylor Martinez and Brion Carnes as scholarship quarterbacks, having lost out to the Kansas City Royals in the Bubba Starling sweepstakes of 2011.

A lot of people wondered if NU would take two QBs in the class after Starling. But as Beck noted, Nebraska was hamstrung by a small class that year, just 17 players. Armstrong was one of them.

"We didn’t really have enough to take two," Beck said. "But getting (Fyfe) was like having two."

A year later, Nebraska signed Johnny Stanton, and when 2014 arrived a good many people outside the program walls bolted right past the kid from Grand Island and decided the QB competition between Armstrong and Stanton was about to commence.

Ill advised. By spring it was clear this was a three-man competition. Even more accurately put, it was Armstrong in the lead with Fyfe and Stanton battling each other for the spot as No. 2.

That's pretty much what Fyfe remembers Beck telling him: "You and Johnny are going to battle for second. He didn't care walk-on or scholarship ... The best man will take that No. 2 spot and get most of the reps in practice. I feel like I kind of gained that No. 2 spot now and I just have to keep a hold of it and still keep pushing Tommy every day for No. 1."

This almost never happened. Fyfe says he about committed on his official visit to UNK. But, what the heck, he might as well go to Lincoln and give it a look.

"It didn't even compare. I knew I wanted to come here."

That doesn't mean the past couple years were easy. While he came here fully expecting to be in the background while Martinez finished out his Husker career, any competitor finds it difficult when the ball isn't in his hands.

The occasional thought does cross a player's mind that maybe he's going to sit and watch others take the stage for the next five years.

"Every day for two years I was like, 'Maybe I should have gone to UNK and started and played, and got paid to go to school,'" Fyfe said. "But every day I was (also) like, 'If I can just work hard and keep getting better, I think I'll have a chance to play.'"

A little patience has brought a reward. Gangly, underdog, whatever. When Nebraska kicks off its 2014 season next Saturday, the sophomore from Grand Island is going to be on the two-deep.

He's not on scholarship yet, but maybe, maybe that's around the corner?

"That definitely goes through my mind," Fyfe said. "It gives me a little bit of an edge I think some days."

Each week Husker Extra will explore life beyond the gridiron with a different Husker football player.

With concern at defensive tackle, who are the players that Nebraska cannot afford to miss time? Husker Extra's Brian Christopherson and CineSp…

Lincoln Southeast grad DJ Foster has temporarily moved over to defensive tackle for the Huskers ... and he's off to a good start.