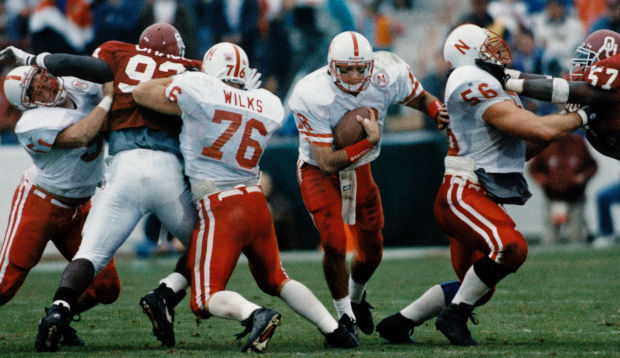 Rob Zatechka (right) and the Husker offense open a lane for quarterback Brook Berringer during a win against Oklahoma in 1994. 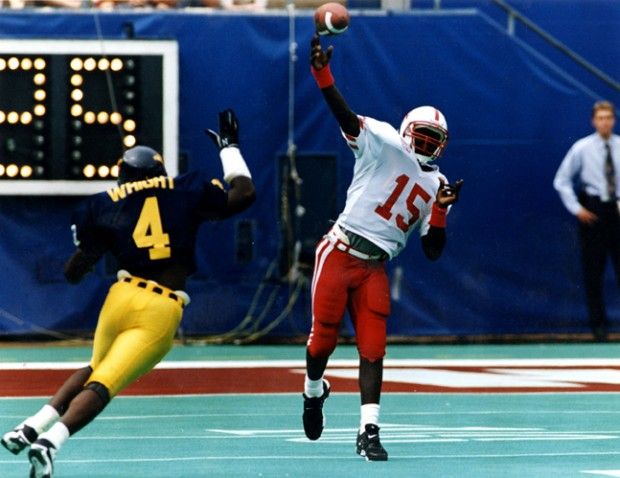 Husker quarterback Tommie Frazier gets off a pass in front of the West Virginia defense at the Kickoff Classic in East Rutherford, N.J. on Aug. 28, 1994. The Huskers won the game 31-0, the first of 25 straight wins between the 1994 and '95 seasons.

Twenty years ago, Nebraska put together a magical run to Tom Osborne's first national championship. During the 2014 season, Husker Extra will revisit 1994 and the Huskers who played a key part.

The No. 1 song on the Billboard chart: "I'll Make Love To You" by Boyz II Men

The No. 1 movie at the box office: "Natural Born Killers"

All the talk was ...: Major League Baseball is on strike

On the cover of Sports Illustrated: The Arizona football team, with the headline "Rock Solid: Arizona is No. 1"

The Huskers: Defeated West Virginia 31-0 in the Kickoff Classic

Disclaimer: Boyz II Men stayed atop the Billboard chart with "I'll Make Love To You" until late November (And you thought Nebraska dominated in 1994). Beginning next week, '94 Flashback will honor the No. 2 song.

Nebraska almost missed the start of the 1994 season.

The Huskers voted to accept an invitation to play in the Aug. 28 Kickoff Classic. The vote was far from unanimous. Finally, after a second count of hands, it was determined that preseason No. 2 Nebraska would put its national championship dreams on the line against West Virginia, a team that finished 11-1 the year before.

“Some guys didn’t want to risk the chance of screwing up a national championship year because we already had a game at Texas Tech, had UCLA here and a tough Big Eight schedule,” said Dr. Rob Zatechka, who started at offensive tackle.

“There was 1:16, fourth quarter, on the clock at Memorial Stadium all through winter conditioning, spring football and the fall workouts. It was a reminder of just how close we came to beating Florida State and Charlie Ward in the Orange Bowl that January."

“Aaron Graham and I would coax each other up and down the stadium steps, after practices, with the reminder on the scoreboard,” Zatechka said. “We believed in who we were. It wasn’t cocky … confident, I’d say.”

Tommie Frazier, the MVP of the 1993 Orange Bowl, was back in charge.

Lawrence Phillips and Cory Schlesinger were ready to break tackles, and the offensive line — Zatechka and Joel Wilks on the left side, Aaron Graham at center, Brendan Stai and Zach Wiegert on the right side — was as loaded as any Husker line. The Blackshirt defense included Mike Minter, Barron Miles, Donta Jones, Doug Colman, Christian Peter, Ed Stewart and Terry Connealy. Darin Erstad, now the NU baseball coach, was the seldom-needed punter.

“We could have called anything and it would work because our guys were having fun,” Frazier said after the game.

Nebraska’s defense was dominant, too. Mountaineer coach Don Nehlen said after the game in East Rutherford, New Jersey: “Personally, I just want to get out of here.”

“We were ready,” Zatechka said. "We’d have four of us starting next to each other for three and four years. Lance Lundberg graduated and Joel Wilks filled in immediately. We thought we were pretty good.

“We had so much experience playing together on that offensive line, we didn’t need line calls even though Milt Tenopir (NU offensive line coach) would be furious because he wanted to hear those calls from the sideline,” said Zatechka, now an anesthesiologist at Nebraska Orthopaedic Hospital in Omaha.

The line still churned out massive offensive numbers despite all the injuries — including the blood clots suffered by Frazier, a collapsed lung that sidelined Brook Berringer. The Huskers eventually started walk-on Matt Turman against ranked Kansas State, and even played team manager Adam Kucera at quarterback in one game. “We just ran out of players in that win over Pacific and we saw Adam going to the locker room in the second half and come back with a No. 9 jersey with no name,” Zatechka said. “That was the kind of season we had. People filling in when we needed them and we needed a lot.

“You looked across the line at our defense, looked down the line at our offense, and knew something special was going to happen. Heck, our best competition was the 1s on 1s on Tuesdays and Thursdays.”

There are no archived tapes of Nebraska's offensive line versus defensive line drills in the pit in North Stadium in 1994.

Photos: Tommie Frazier through the years

Arguably the greatest quarterback in Husker football history, Tommie Frazier left an indelible impression on the state in guiding Nebraska to …

For NU fans, these events are stuff of Husker football legend. As Nebraska football celebrates its 125th anniversary season, the Lincoln Journ…

Rob Zatechka (right) and the Husker offense open a lane for quarterback Brook Berringer during a win against Oklahoma in 1994.

Husker quarterback Tommie Frazier gets off a pass in front of the West Virginia defense at the Kickoff Classic in East Rutherford, N.J. on Aug. 28, 1994. The Huskers won the game 31-0, the first of 25 straight wins between the 1994 and '95 seasons.