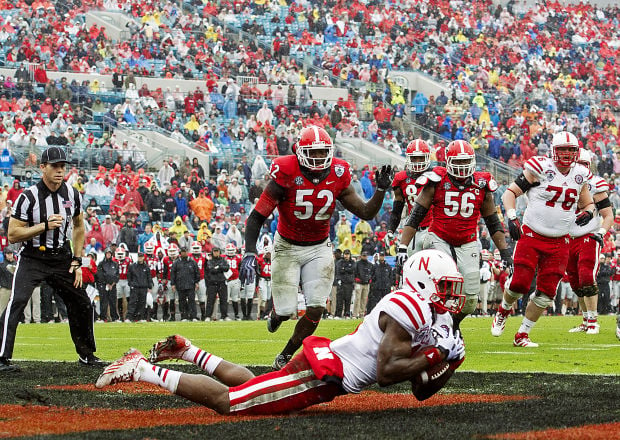 Nebraska wide receiver Quincy Enunwa (18) makes a diving catch in the end zone for Nebraska's first score during the second quarter in the 2014 Gator Bowl against Georgia on Wednesday, Jan. 1, 2014, in Jacksonville, Fla. 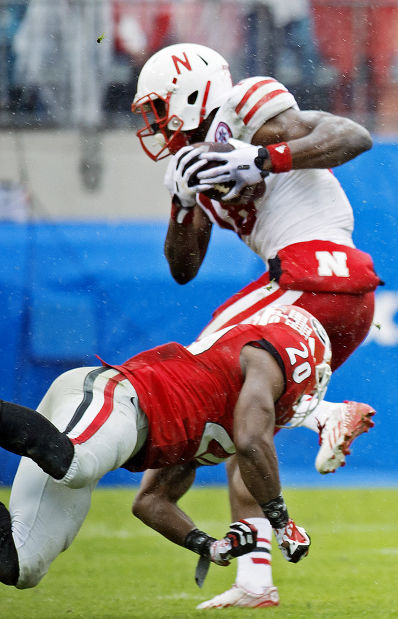 Nebraska wide receiver Quincy Enunwa (18) turns for the end zone on his way to a 99-yard touchdown reception ahead of Georgia safety Quincy Mauger (20) during the second half of the Gator Bowl on Wednesday, Jan. 1, 2014, in Jacksonville, Fla.

JACKSONVILLE, Fla. — They’d been here before, in position for a bowl breakthrough against some SEC bully, only to have Lucy pull the football away.

And now here the Huskers were on their 1-foot line, going in reverse after a mishandled snap. Another New Year’s Day rerun? Another missed opportunity that would cast a cloud over the next eight months?

One play in Nebraska’s 24-19 Gator Bowl win against Georgia showed this day could be different.

With their backs against the ropes, the Huskers threw a haymaker. Redshirt freshman quarterback Tommy Armstrong dropped back 8 yards into his end zone and searched for a faraway target.

Searched and searched. There he was. Big-bodied wide receiver Quincy Enunwa. He was running free, absurdly so.

Better late than never. Enunwa caught the ball at the Nebraska 45, just before Georgia safety Quincy Mauger could get to the scene.

Enunwa bounced off him and said goodbye, performing a bow in the back of the end zone.

“I mean, it was kind of just one of those calls where you don’t have too many options out there, stuck on your own 1-yard line,” Enunwa said. “Luckily, our coaches trust in us as playmakers.”

“Oh, my God, I’ve never been more excited to score a touchdown in my life, and I didn’t even score it,” Bell said.

The 99-yard score in the third quarter proved to be the signature highlight, but would have been lost in the background if not for a gutsy performance by the Blackshirts, who saved the victory with two dramatic red-zone stands in the final five minutes.

The Husker defense gave up some yards, but the dam never broke. Georgia was held without a first-half touchdown for the first time since October 2012.

The Bulldogs won the yardage battle 416-307 and ran 82 plays to Nebraska’s 59. But the Huskers contained talented running back Todd Gurley as well as could be expected.

While Gurley had 97 yards receiving, he had to fight for 86 rushing yards on 21 carries.

"We forced him east and west and had people able to rally to the football," said senior defensive end Jason Ankrah.

Gurley got his yards here and there, but it was junior Ameer Abdullah who got the better of the battle of talented backs, finishing with 122 yards on 27 carries and a mud-stained jersey.

There'd be no display of SEC dominance on this day.

“We’re confident in ourselves,” said sophomore defensive end Randy Gregory. “It doesn’t matter what conference it is, as long as we have that confidence we can play with anybody.”

But could they finish a game like this? That was the question.

A year ago in the Capital One Bowl, Nebraska led Georgia by eight points in the third quarter only to see the Bulldogs rattle off the final 22 points. And a year before that, the Huskers had jumped to a lead against South Carolina only to fall flat in the second half in a 17-point loss.

That was certainly on the minds of the Huskers as they gathered at halftime Wednesday, holding a tenuous 10-9 lead.

“Let’s just go win this thing, let’s go win it,” coach Bo Pelini told his players. “Don’t go out there worrying about losing. Let’s go win it. Let’s go take control of this football game and make plays, and they did. Our guys had a tremendous amount of confidence.”

With the victory, Nebraska finished 9-4, ended a three-game bowl skid and joined Alabama and Oregon as the only programs to win at least nine games each of the past six years.

The Huskers got win No. 9 by playing poised, winning the turnover battle 2-1, and getting a steady game from Armstrong, who threw for 163 yards and made just one bad mistake.

It was a game played in a steady rain in a stadium with maybe 40,000 people, most of them Georgia fans.

“It’s been raining all week. I really don’t like playing like this, but I kind of liked it today,” Gregory said. “It felt like a dogfight.”

The rain continued to fall in the game’s final minutes, with Georgia driving into Husker territory.

Nebraska defensive back Andrew Green made a clutch hit on fourth-and-2 from the Husker 14 to force one incompletion with 4:42 left.

But one more dramatic stand was required. The Bulldogs moved to the NU 23 in the final minute, and were close to breaking through on a Gurley run if not for a saving tackle by Husker safety Corey Cooper.

“Those are the moments you live for right there,” said sophomore linebacker David Santos. “It’s wet and it’s fourth down and someone has to make a play.”

And, sometimes, you get a little help.

Georgia senior tight end Arthur Lynch had been a nuisance to the Huskers all day, catching six passes for 69 yards.

But on fourth down, he dropped this one, inside the 10.

When the pass fell incomplete, a party broke out on the Husker sideline. Pelini smiled big and hugged the nearest person, who turned out to be defensive line coach Rick Kaczenski.

As the head coach stood at a podium to accept the bowl trophy, Cornhusker Marching Band members and various fans chanted his name.

There were only about 3,000 or 4,000 fans left at that point, but they roared their approval during Pelini's speech.

This long season ended on a high note for the Huskers, now winners of nine straight games decided by a touchdown or less.

The rain kept falling and no one in a Nebraska uniform was in any hurry to get out of it, lingering on the field, running around to high-five fans.

“At the end of the day, I can’t tell you, I don’t know if I’ve ever been more proud of a group of guys than I am of the guys behind me,” Pelini told the fans.

“This senior class deserved to go out with a win. And we talked that it was their opportunity to go out the right way and set this program up for great things to come. Because we’re looking forward to some championships in the near future.”

Husker defenders eager about the possibilities for 2014

There was laughter, a continuance of hugs and Quincy Enunwa lugging an oversized MVP trophy to a bus. There were the smiles that come attached to winners and hats on their heads that called them champions.

Wednesday's Gator Bowl action between Nebraska and No. 23 Georgia at EverBank Field in Jacksonville, Fla.

Husker junior cornerback Josh Mitchell accounted for both of Nebraska's defensive turnovers in the Gator Bowl, and the Huskers turned both into touchdowns.

Don't make Randy Gregory mad. “When we start fighting and things like that, talking trash only makes it easier for me because I start getting mad," the Husker sophomore defensive end said.

Nebraska wide receiver Quincy Enunwa (18) makes a diving catch in the end zone for Nebraska's first score during the second quarter in the 2014 Gator Bowl against Georgia on Wednesday, Jan. 1, 2014, in Jacksonville, Fla.

Nebraska wide receiver Quincy Enunwa (18) turns for the end zone on his way to a 99-yard touchdown reception ahead of Georgia safety Quincy Mauger (20) during the second half of the Gator Bowl on Wednesday, Jan. 1, 2014, in Jacksonville, Fla.