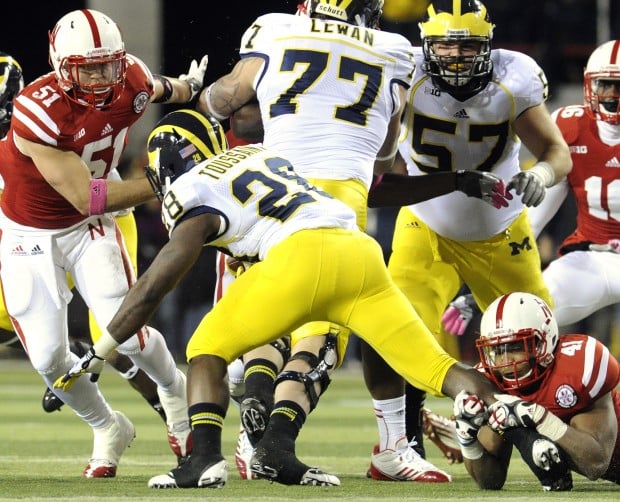 Nebraska's Will Compton (51) closes in on Michigan running back Fitzgerald Toussaint (28) while teammate David Santos (41) holds an ankle in first-quarter action on Saturday, Oct. 27, 2012, at Memorial Stadium. 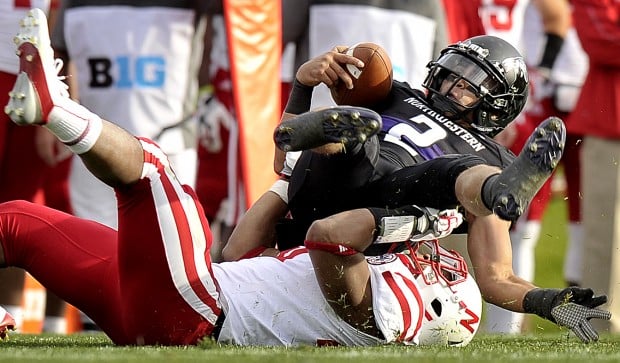 There have been no footraces to the nearest streetlamp just yet. But that doesn’t mean David Santos wouldn’t hazard a guess at who is fastest at his position.

Especially when he's asked if any of the true freshman Husker linebackers are faster than he is.

“We haven’t raced yet, but I doubt it,” Santos said.

Fast enough to take the less-than-ideal route and still make a play. Fast enough to rack up a team-high 10 tackles against Michigan.

Husker fans have heard much about the redshirt freshman ever since he committed to Nebraska two years ago — one of those four-star recruits who piled up 136 tackles his senior year in Klein, Texas.

But then came his redshirt year. Then a slow rise this fall. There was a flash of Santos here and there, but just three tackles through the first six games.

It was just a couple of weeks ago when Santos offered the first big tease of his potential. It was one of those plays that jumped off the screen and had everyone back home tweeting his name.

“You know, the one that showed everybody was the option against Northwestern,” Els said. “He probably should have gone outside of the defensive end to make the play because we were actually a guy short, but David saw an opening and said, 'You know what … I’m going to take it.' He took it and ran through and got Kain Colter for a 2-yard loss. And that showed me, 'OK, he’s now understanding how he can play fast.'"

The ladder to Santos’ ceiling still has many rungs, but Bo Pelini seems to think the linebacker has taken at least one necessary step.

“Now he's to the point where he's not going to hurt us. He's really helping us and doing some good things,” Pelini said.

The Husker coach calls him explosive. He also said Santos is “nowhere near where I think he's going to be in the future.”

That might excite Husker fans as much as anything.

It’s possible the 6-foot-2, 220-pound Santos may not see as many snaps this week against Michigan State’s pro-style attack as he did the last two games.

Nebraska is more likely to employ its base personnel, which doesn’t rely on Santos as much.

“I don't know where I'm at with that,” Santos said. “But I feel that I'll get some snaps during the game."

He’ll be taking notes in meetings regardless.

“He’s willing to listen and watch us,” Whaley said. “He asks questions. You have to respect a guy like that who doesn’t get above himself because he gets a lot of playing time. He’s still willing to learn. Because, the name of the game is you never can learn too much and I think he understands that at a young age.”

The veterans -- Will Compton, Whaley and Sean Fisher -- sit in the front row during position group meetings. But Santos says he’s not afraid to speak up on occasion.

“I feel pretty comfortable in that meeting room right now,” he said.

That’s important. It’s not lost on Santos that those three linebackers sitting in the front row right now won’t be there next spring.

“Trevor Roach and I talk about it a lot, and a couple younger guys, ‘How weird is it going to be without Sean Fisher and Will and Zo in there?’”

Weird, maybe. But Santos is one player who could lay some serious groundwork for that transition before this season ends.

“You never really know how it will end up, but I have a feeling we’ll be fine and everything will work itself out,” Santos says of Nebraska’s linebacker position in the years ahead.

The thing Els likes is that Santos seems to keep making positive steps at each stage of his career.

“It will humble you real quick to realize that this is a different level of play. Watching the first couple games and some of the tough losses, you kind of think maybe if I would have played I would have helped out. But that's not up to me, that's up to the coaches and the staff. I think everything worked out pretty well in the end for me."

He couldn’t have seen it coming as a junior in high school.

Santos was just playing for the fun of it then.

“I hadn’t really planned on going to the next level or anything like that,” he said. “I just liked to play football in high school.”

But after Santos posted 107 tackles his junior season, his coach pulled him aside.

Get ready, he said. Things are about to get heavy. The phone calls, the recruiting letters, the attention. All that’s coming.

“A lot of doors opened up,” Santos said.

The linebacker knows one speed to go through those doors.

Fast. Faster than most.

The Husker defense appears to have turned things around since a couple of shoddy performances earlier in the season (see: UCLA and Ohio State). So how has it happened?

It's brotherly love for the Huskers' senior linebackers

Nebraska's three seniors linebackers — Will Compton, Alonzo Whaley and Sean Fisher — have been a band of brothers during their time together in Lincoln, and right now they are all contributing to a defensive resurgence.

Husker linebackers coach Ross Els lost all three starters from last year's team. Thus, youth will be served in 2013. There is no other choice.

David Santos had his moments last season as a backup weakside linebacker. Now, as Nebraska's projected starter at middle linebacker, the sophomore will have to step up his game mentally and physically, Steven M. Sipple writes.

TV screen play: Solich's Bobcats look to get back on track

A rundown of this weekend's college football television lineup.

Redshirt freshman linebacker David Santos has had limited opportunities to make his mark in games so far this season. But after coming up big a couple of times against Northwestern, he's hoping to see even more of the field against Michigan.

Michigan State's offense might not be blowing teams off the field this falll, but that doesn't mean the Huskers can expect a blowout come Saturday. Not with the Spartans' defense.

Linebacker David Santos was named the league's co-freshman of the week, sharing the honor with Minnesota quarterback Philip Nelson.

Nebraska's Will Compton (51) closes in on Michigan running back Fitzgerald Toussaint (28) while teammate David Santos (41) holds an ankle in first-quarter action on Saturday, Oct. 27, 2012, at Memorial Stadium.