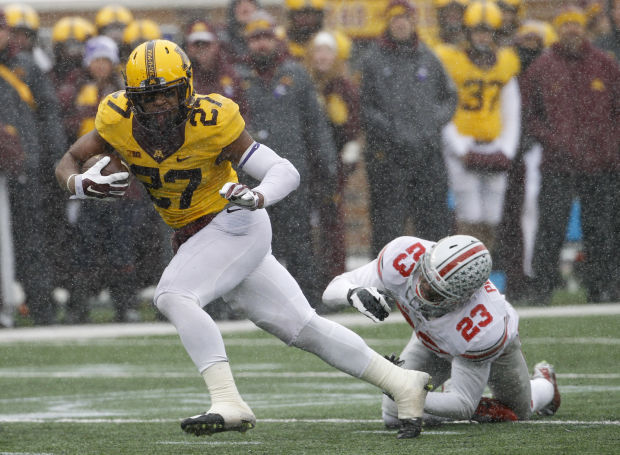 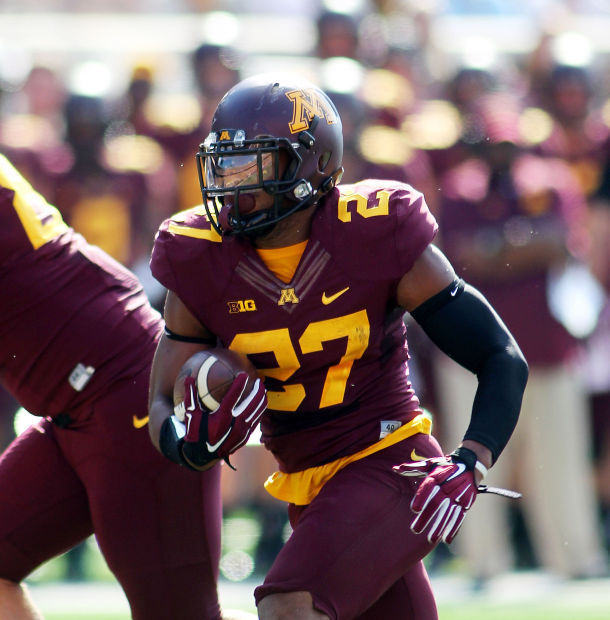 Minnesota running back David Cobb looks for room to run during a game against San Jose State earlier this season.

There’s no official word from Minneapolis on exactly how much salivating Minnesota running back David Cobb did while watching game film of Nebraska’s defense against Wisconsin.

Hey, if Melvin Gordon can rush for 359 yards in only two quarters against the Huskers, en route to an FBS record 408, why wouldn’t Cobb feel confident when Minnesota visits No. 21 Nebraska on Saturday?

“They run the ball a lot and Wisconsin ran the ball a lot,” Nebraska cornerback Josh Mitchell said. “After watching that film, I would imagine that they’re going to try and duplicate some of the things that Wisconsin did.

“For them, it looks like a recipe for success. So we need to fix the little things that need to be fixed.”

Even that may not be enough to slow Cobb and a Minnesota team that’s established its identity rushing the football.

A senior from Killeen, Texas, Cobb is seventh in Minnesota history with 2,617 career rushing yards, and he’s 114 yards shy of tying Laurence Maroney’s single-season record of 1,464 rushing yards set in 2005.

Yet Minnesota coach Jerry Kill isn’t ready to predict a big day for Cobb against Nebraska based solely on Gordon’s record day.

“Melvin Gordon is on a different planet. I don’t know what else to say,” Kill said. “Melvin Gordon can do that against a lot of people. If you make one mistake and you get out of your gap just a little bit or you get in a one-on-one with him, he’s going to make anybody in the country look not so good.

“When they’ve given him the ball, he’s done it against everybody. He’s a guy that's got a chance to win the Heisman. He’s a great, great back.”

He entered last season nowhere to be found on Minnesota’s fall camp two-deep chart, but ran 237 times for 1,202 yards his junior season.

“I think the biggest thing is his maturity — maturity, and I think he’s just gotten bigger and stronger, just like any kid that’s come in,” Kill said. “He’s made himself. He doesn’t have much body fat, he’s trained hard.”

Patience and vision, Kill said, are two of Cobb’s strengths.

“He's very patient to the hole,” Kill said. “He brings people to him, you know, linebackers, they all step up, and then he's able to make that slide cut and do what he does, but patience is his best attribute.”

As for facing Nebraska on the heels of its 59-24 loss at Wisconsin … well, Kill would rather not, thank you.

“They won’t be in a very good (mood) and they’ll play their tail end off,” Kill said. “I’ve got the greatest respect for coach (Bo) Pelini. We’ve had one of those games this year (at TCU). Some things just snowball.

“But I promise you that his football team, and with his intensity, they’re probably getting after it right now. He’ll have them ready. You’d a lot rather play a Coach Pelini team that won a game than not winning a game.”

As has been the case in Nebraska’s past defensive debacles, players and coaches say the mistakes aren’t so big they can’t be fixed.

“As a player you have to be able to man up and watch the film and evaluate your performance and then go out there and practice better,” Mitchell said. “Practice leads into games, and all you can do is wait to get to practice and develop and get better.”

Sipple: Put the blame on coaches

"He was coaching me up, and I just took it in stride and kept playing," Daniel Davie said.

Christopherson: How can the Huskers stop Cobb?

VIDEO: Brian Christopherson talks about how the Huskers match up with Minnesota RB David Cobb and what Nebraska is fighting for at this point.

Minnesota running back David Cobb looks for room to run during a game against San Jose State earlier this season.