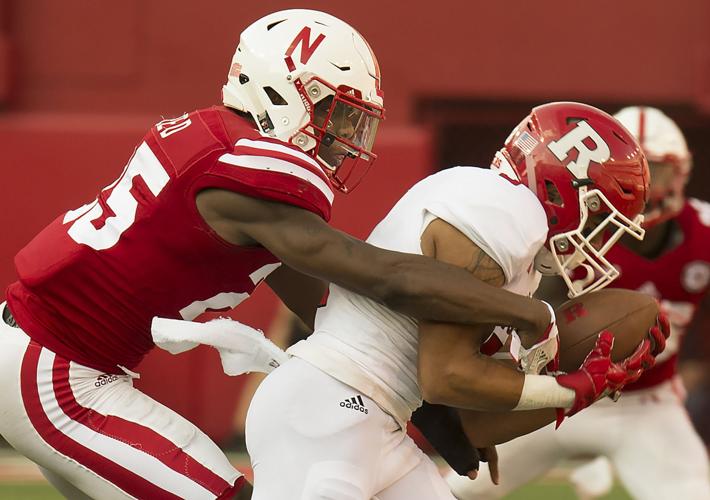 Nebraska defensive back Antonio Reed (25) tries to knock the ball from the hands of Rutgers receiver Jawuan Harris in the third quarter of Saturday's game at Memorial Stadium. 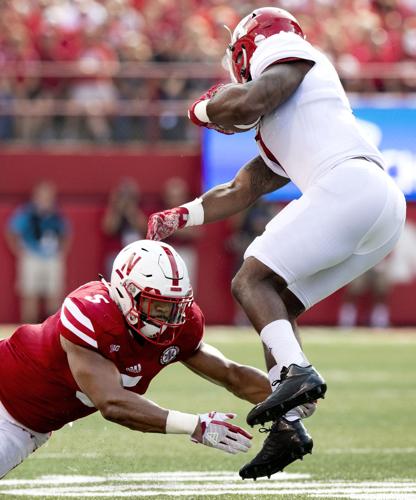 Nebraska linebacker Dedrick Young tackles Rutgers running back Robert Martin (right) during the first half on Saturday at Memorial Stadium.

That 30 minutes on the West Coast is well documented by now.

The 42 points scored by Oregon against Nebraska’s defense. The 409 yards, piled up at a rate of more than 9 yards each time Ducks sophomore quarterback Justin Herbert took a snap. The six passing plays of 20-plus yards. The helpless look of a defense, coordinated by Bob Diaco, in the process of surrendering more than 900 yards and 78 points in its first six quarters of game action.

What a difference a couple of weeks can make.

Huskers head coach Mike Riley readily acknowledged that the Blackshirts did the heavy lifting involved in a slogging, 27-17 victory over Rutgers on Saturday afternoon at Memorial Stadium.

“There has been growth,” Riley said. “Lots of good teaching, lots of good football today. I think that it was really telling how they drove down and scored right away and then really didn’t again.”

Really, that’s the way it’s been since halftime in Eugene.

The Huskers surrendered just 194 yards and 12 first downs to the Scarlet Knights.

Rutgers breezed 75 yards for a touchdown in an 11-play opening drive, converting both third-down tries and picking up four first downs along the way.

It wasn’t an overnight switch, either, but rather a trend 2½ games in the making.

“We've shown signs,” senior linebacker Luke Gifford said. “As soon as we got that lead back this time, we pointed to last week and said, ‘That’s not happening. It’s not happening this week. We have to make a stop and once the offense gives us a lead, we were going to keep it.’”

Indeed, against Northern Illinois, the defense played well throughout and then gave up a 47-yard passing play that jump-started a go-ahead scoring drive. Defensive players this week said the goal was to play as well, but not give up any big plays, a tall task.

That, despite playing all but nine snaps without both starting safeties — Joshua Kalu missed his second straight game with a hamstring injury and Aaron Williams was ejected in the first quarter for targeting — their top two outside linebackers opposite Gifford, and top cornerback Chris Jones.

“The players, we just keep getting better,” Diaco said. “Continued adversity and then the next man steps up and goes in the game because he’s prepared well. The guys care a bunch and they go in and do the jobs and execute the defense. There’s a deep understanding of the plan because they put the work in.

"They didn’t blink, they didn't bat an eye, they just kept swinging and throwing haymakers. It’s a fun group to be developing with."

The Blackshirts’ most impressive work came in the second half Saturday. After Tanner Lee had an interception returned for a touchdown and a 17-14 Rutgers lead, the Husker offense went three-and-out and the Scarlet Knights took over at midfield, primed to extend the lead. Instead, NU forced a three-and-out of its own and the offense responded with a 17-play drive to take a 21-17 lead.

This time, like Gifford said, the opponent would not take the lead back. Instead, Gifford and Antonio Reed each logged interceptions in Rutgers’ final four possessions. RU's other nine plays yielded just 19 yards and one first down.

There’s no perfect metric. For instance, neither NIU or Rutgers — or Oregon in the second half, for that matter — used tempo to stress NU’s communication and alignment. But the Blackshirts have moved from No. 122 out of 130 Football Bowl Subdivision schools in total defense after two games to No. 57 after four. They’re 29th in the nation in run defense, up 40 spots. They’re ranked No. 30 in red zone defense.

Take away 30 non-offensive points for opponents in three games at Memorial Stadium — a punt return touchdown, a safety and three interceptions returned for touchdowns — and NU is allowing 14.7 points per game at home.

“The measuring stick of it, I can’t quantify that,” Diaco said. “We’re getting better every day and we’re going to do the same thing tomorrow.”

Trev Alberts is intriguing as a potential candidate to be the next Nebraska athletic director. In fact, the former Husker football great intrigues me more than anyone else on the "Husker ties" list — not that I think "Husker ties" should be a prerequisite for the position.

Diaco not a stats guy, but Husker DC likes how things added up Saturday

Bob Diaco still isn’t much of a stat guy. The stat that really matters is having one more point than the other team, the first-year Nebraska d…

Steven M. Sipple: 'Stone cold' Lee shrugs off boo-birds while teammates have his back

Tanner Lee's performance Saturday was acceptable. Nothing more than that.

By the time Luke Gifford hauled in his first career interception with 54 seconds remaining Saturday afternoon at Memorial Stadium, the outcome…

After frustrating start to season, Ozigbo runs with opportunity vs. Rutgers

Run the Ball Guy and Play Devine Ozigbo Guy had to be walking on air as they left Memorial Stadium Saturday.

A rash of injuries has led to Nebraska's next-man-up approach this season.

Watch: Gifford on a 'Hip, hip, hooray!' with a little more oompf

Nebraska linebacker Luke Gifford on the Huskers tumultuous week and getting a 'Hip, hip, hooray!' following Saturday's win over Rutgers.

Nebraska offensive lineman Jerald Foster on the Husker offensive line's desire to get back on the field and atone after last week's showing.

Nebraska running back Devine Ozigbo got into a bad head space after being pushed down the depth chart to start the season. But he got that tur…

Watch: Foster: "You know Southeast. We do it big"

Fire up the floodlights.

Nebraska defensive back Antonio Reed (25) tries to knock the ball from the hands of Rutgers receiver Jawuan Harris in the third quarter of Saturday's game at Memorial Stadium.

Nebraska linebacker Dedrick Young tackles Rutgers running back Robert Martin (right) during the first half on Saturday at Memorial Stadium.