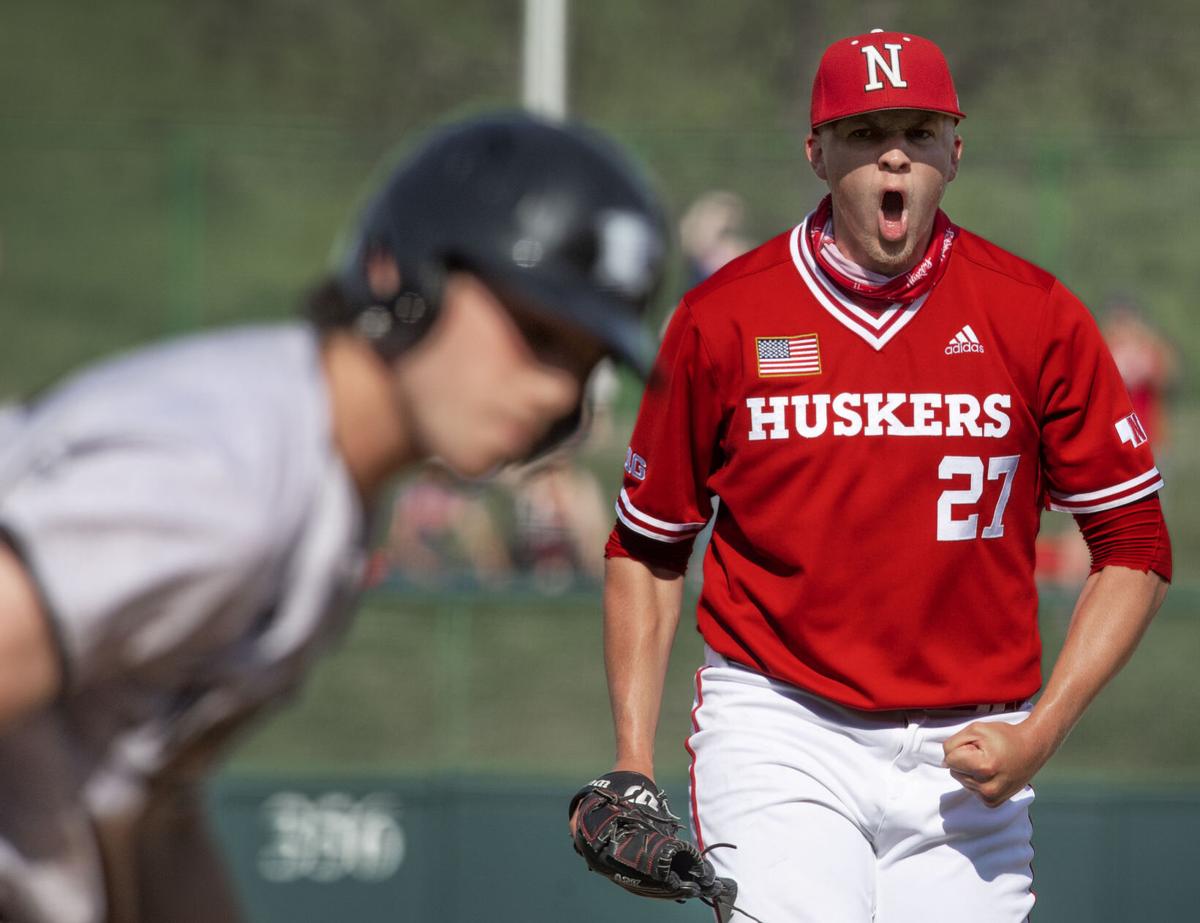 Nebraska relief pitcher Jake Bunz (right) gets Northwestern's Shawn Goosenberg (left) to strike out swinging for the final out of the Huskers' 11-5 victory Saturday at Haymarket Park. 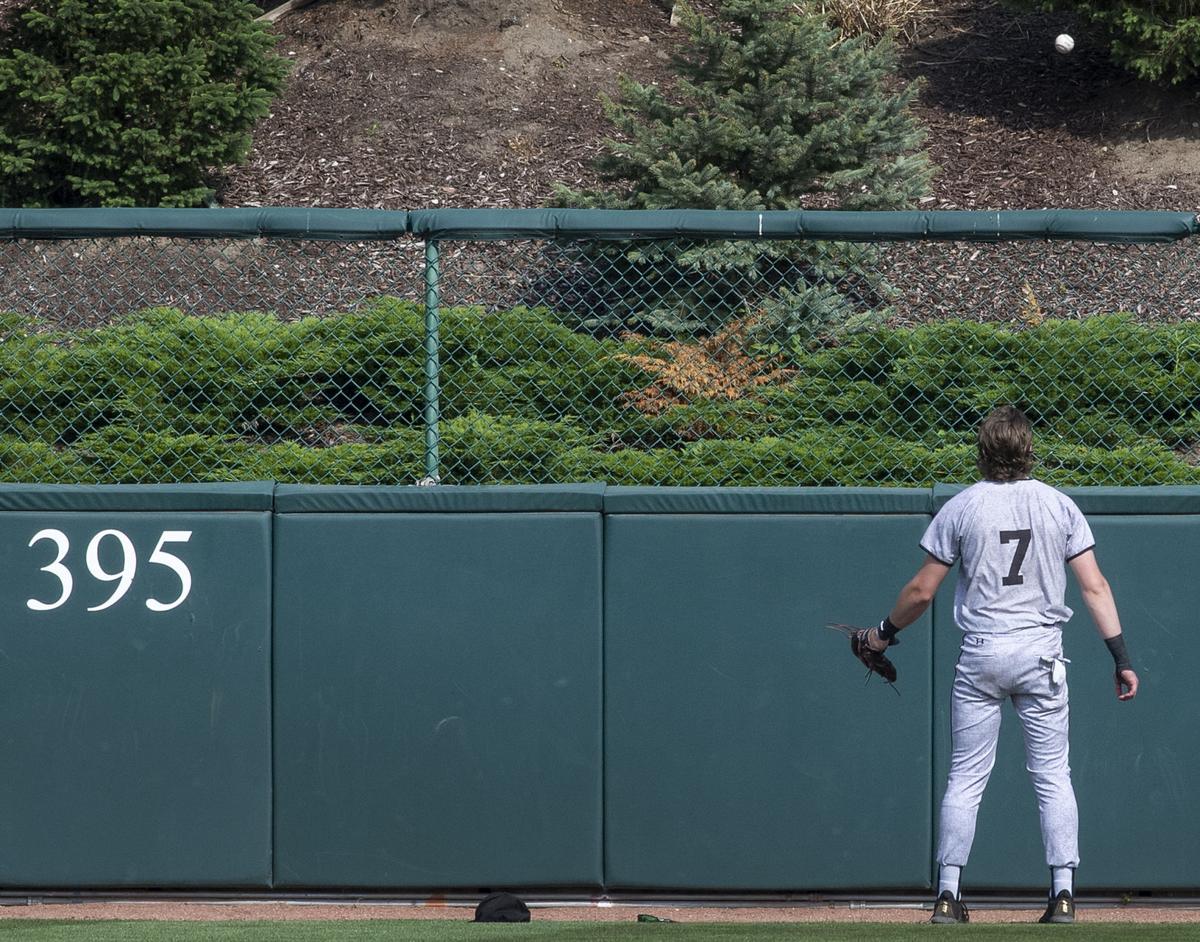 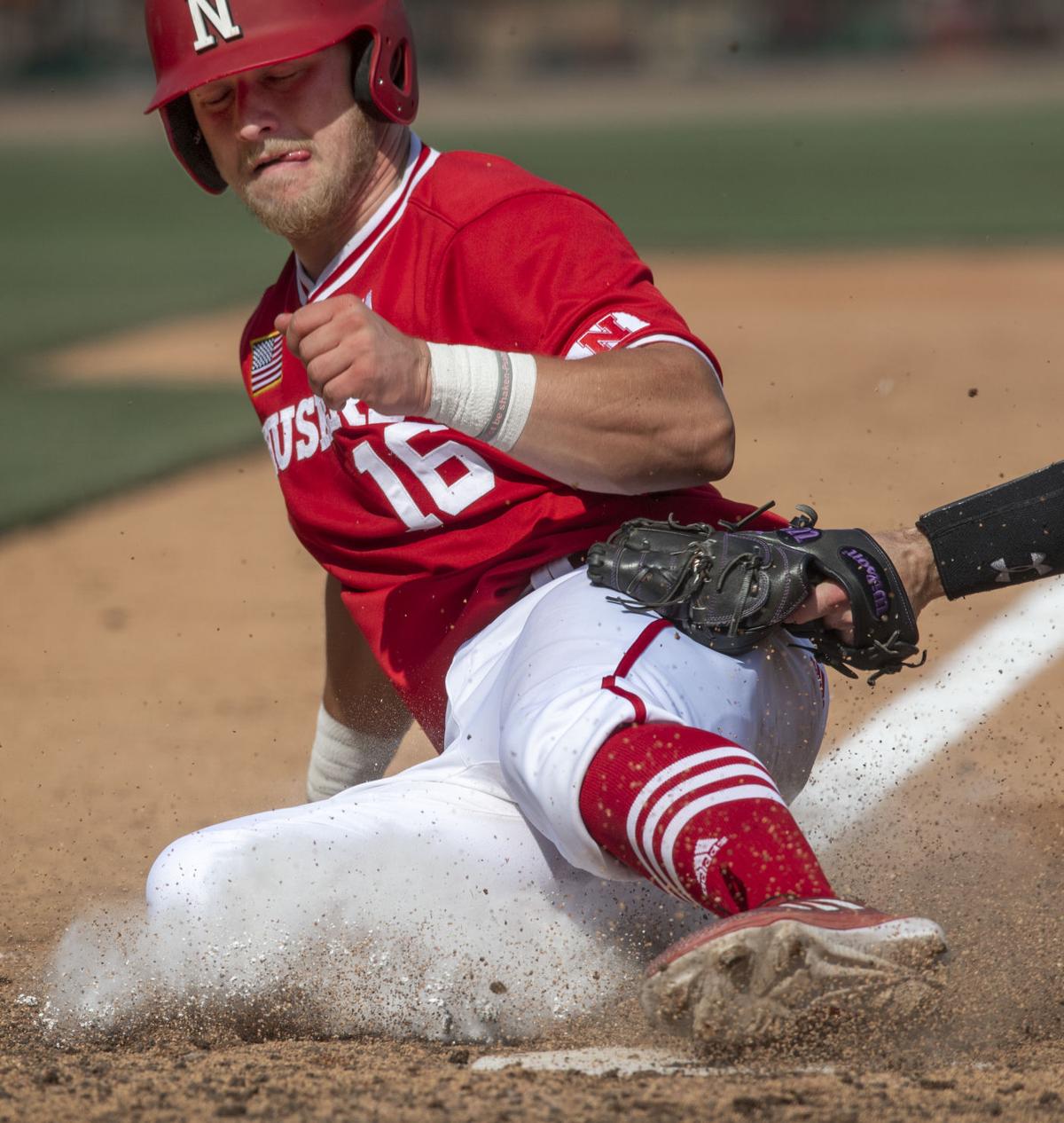 Nebraska's Griffin Everett beats the tag as he scores on a wild pitch for the Huskers' eighth run against Northwestern on Saturday at Haymarket Park.

Nebraska and Northwestern knew the situation before the series even began. The Wildcats, coming off a two-week COVID-19 pause, were going to have a very limited roster for their three games against the Huskers at Haymarket Park. There was always a chance Sunday's third game might not even get played.

"Even on Friday it was just a very odd, eerie feeling when they walked in," NU senior Joe Acker said Saturday. "Because, one, it was a gloomy day. And then they've got only 19 guys coming down the tunnel and you're used to seeing 35-40 guys coming down. So it kind of had a scrimmage-esque feel to it."

Turns out, there will indeed not be a Sunday contest between the teams.

About an hour after Nebraska finished off an 11-5 comeback win Saturday over the Wildcats, the announcement came that Sunday's series finale wouldn't be played because of COVID-19 issues in the Northwestern program.

How short-handed was Northwestern?

The Wildcats brought every player that was available, and still only had six pitchers for the entire weekend. So when Northwestern led Nebraska 5-2 going to the bottom of the seventh inning Saturday, things perhaps were beginning to get a little tense the Huskers' dugout.

But Nebraska eventually broke through, scoring six runs in the seventh inning, including three with two outs, to erase a 5-2 deficit, then tacked on three more in the eighth to win the series.

By game's end, Northwestern had burned through all its available arms.

"Just talking to Coach (Spencer) Allen, there's not a whole lot left for them. And we knew that going into the weekend that they were coming in short-handed, and we were just going to try and navigate through the weekend as best we could," coach Will Bolt said. "And it looks like there's probably not going to be enough guys left for them to compete tomorrow."

The Sunday game is a no-contest, similar to competitions in other Big Ten sports with similar circumstances in 2020-21.

"It's going to be a health and safety thing, as far as I'm concerned," Bolt said.

The victory kept Nebraska (25-11) on top of the Big Ten standings, a half-game ahead of Indiana. So while Northwestern might have just been happy to be playing again after its layoff, the Huskers had had serious stakes on the line in a game they could ill-afford to lose.

"We have everything to lose in that situation," said Acker, whose two-run single in the seventh gave Nebraska its first lead of the game. "They're down a bunch of guys, they're not throwing their normal starter.

"So when you come out flat, you make a few errors, you're not playing a great brand of baseball, you start to press a little bit. But we have enough experience on this team that we knew we were going to get back into that game.

Five Huskers had multi-hit games, including Max Anderson's four-hit day with two doubles. Acker also had two doubles in a 3-for-6 effort, and Luke Roskam was 2-for-3 with a mammoth home run to straightaway center in the eighth inning.

If the Huskers wanted to set a tone early against a struggling Northwestern squad, NU did so. Just not the way it would have liked.

Nebraska loaded the bases with one out in the bottom of the first inning before back-to-back strikeouts ended the threat. In the top of the second, Northwestern strung together three hard-hit balls and a squeeze bunt to take a 2-0 lead.

The Wildcats (12-18) added to their lead in the third when Shawn Goosenberg doubled, stole third and trotted home after a throw from Nebraska catcher Roskam sailed into left.

Nebraska got within 3-2 in the fifth when Acker doubled and Spencer Schwellenbach deposited a Northwestern offering in the Wildcats' bullpen for a two-run homer, only to see Northwestern answer with solo homers in the sixth and seventh innings.

But soon enough, Nebraska turned the tide in the later innings, much like it did in Friday night's 12-2 win.

"We saw it last year — you never know when the games might end for you. You never know when you might not have an opportunity to play," Bolt said "So we knew they were getting short on players, short on pitching. So you've just got to do what you've got to do today, and figure out what's going to happen tomorrow." 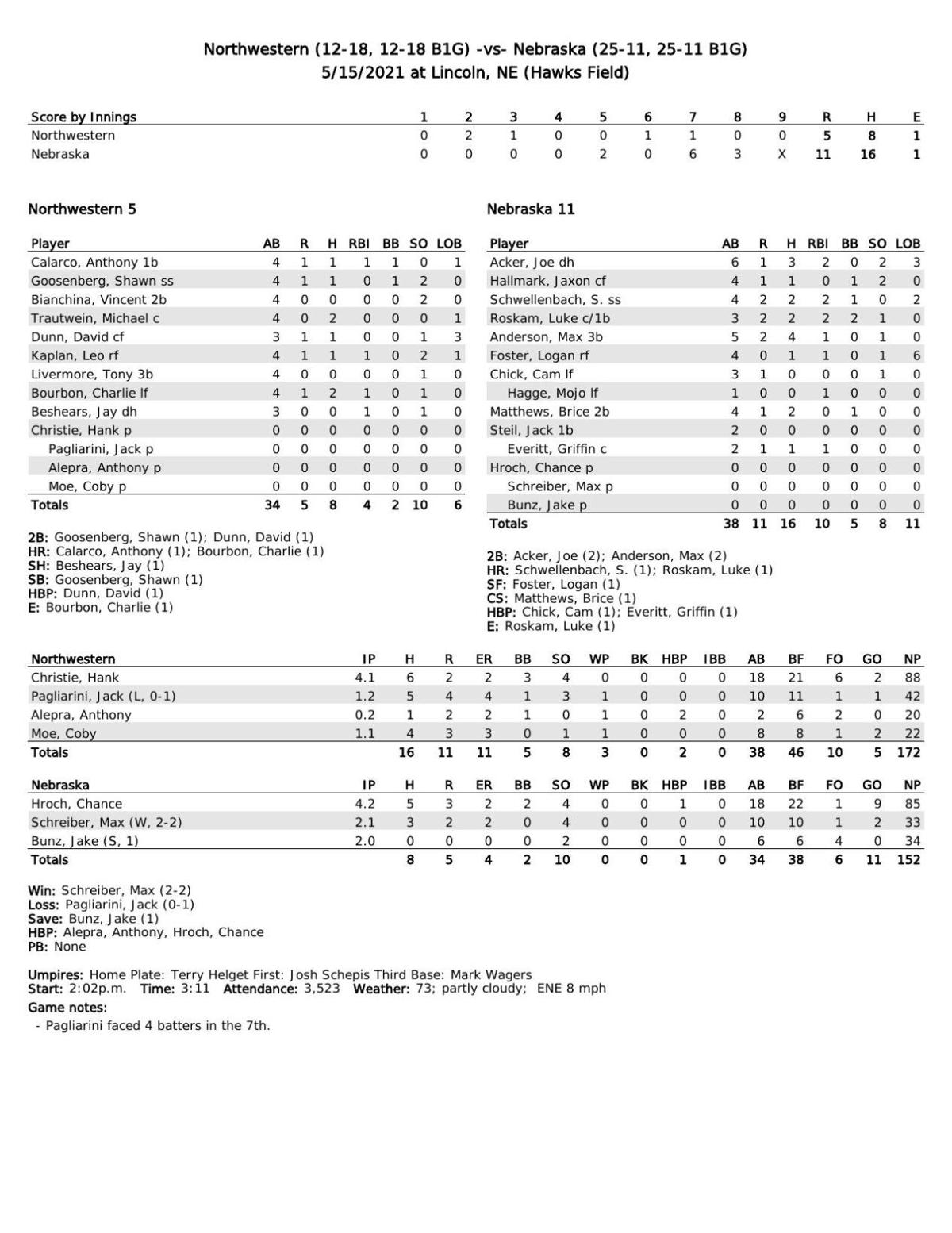 Nebraska likely saw its chances hurt severely by a home sweep at the hands of Rutgers two weekends ago.

Will Bolt said Wednesday morning he is "very" confident that Northwestern will be in Lincoln for this weekend's series at Haymarket Park.

The Huskers earned some conference recognition ahead of a weekend that offers a chance to play in front of a national audience.

The NCAA will allow full capacity at baseball championship events at venues if local and state guidelines allow for it.

Of the Huskers' four games at the Indiana pod, three will be on national television: two games on BTN and another on ESPNU.

NU trailed 9-2 after the sixth inning, but scored five runs in the seventh and four in the ninth.

Nebraska relief pitcher Jake Bunz (right) gets Northwestern's Shawn Goosenberg (left) to strike out swinging for the final out of the Huskers' 11-5 victory Saturday at Haymarket Park.

Nebraska's Griffin Everett beats the tag as he scores on a wild pitch for the Huskers' eighth run against Northwestern on Saturday at Haymarket Park.