Nebraska's offense managed just one hit and two baserunners after the fourth inning as Michigan State ended the Huskers' five-game winning streak with a 4-2 victory Saturday in East Lansing, Michigan.

The loss marked just the third time in 26 games this season that NU failed to score at least four runs, and the first time since being shut out at Iowa on March 19.

Nebraska (19-7) finished the game with five hits against a Michigan State pitching staff that came into the game ninth in the Big Ten in earned-run average and 11th in the league in hits allowed per nine innings.

"Our at-bats weren't good enough. I think we had one 3-2 (count) win on the day, and probably eight opportunities," NU coach Will Bolt said on the Husker Sports Radio Network. "And we've got that grit board that we try to fill up, and there weren't a whole lot of things on there today that we did well just from a competitive standpoint.

"Take away the hits. Just from a competitive standpoint, we weren't good enough."

That included a sixth inning in which the first two Nebraska batters reached base thanks to a single and a walk. The Huskers proceeded to pop up a bunt, strike out looking, and fly out to left field to douse what ended up being their final real threat of the game.

Nebraska finished 0-for-10 with runners in scoring position, and 0-for-15 with runners of any kind on base while striking out 10 times.

The Spartans (12-16) took the lead with a pair of two-out runs in the fifth inning and tacked on an insurance run in the seventh. The 7-8-9 hitters in MSU's order combined for six of the Spartans' eight hits, with No. 8 hitter Zach Iverson going 3-for-3 with a pair of RBIs.

Luke Roskam had a solo home run for Nebraska on his way to a 2-for-4 day at the plate. Logan Foster added a double. 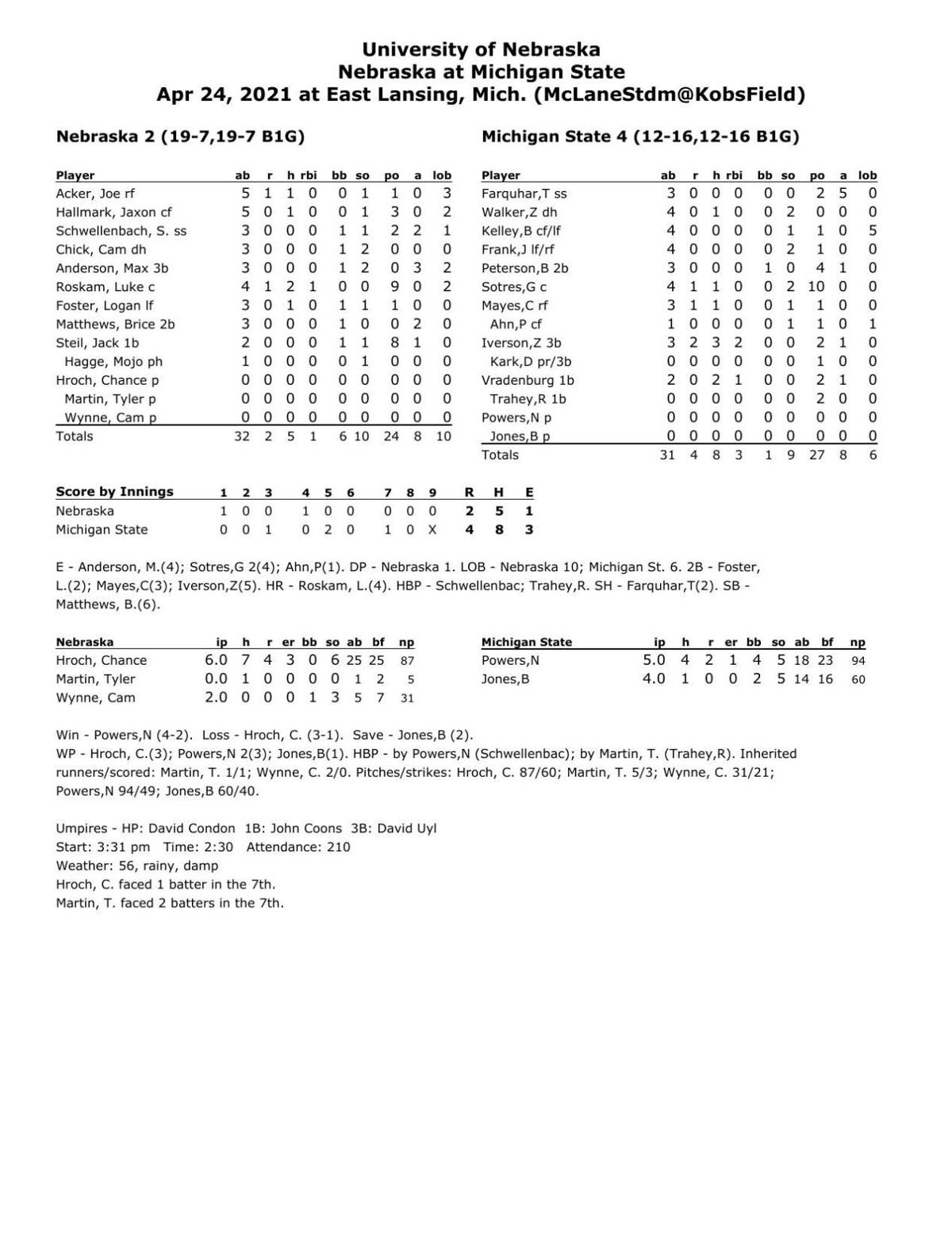 Nebraska had runners on base in each of the first four innings but managed just the two runs.

"We've seen it for probably the last three or four games outside of maybe one, where we have a chance early to kind of break it open and we just let them hang around a little bit," Bolt said. "We've been able to get away with it; today we just weren't."

Because Michigan lost to Rutgers earlier in the day, Nebraska will remain in first place in the Big Ten for one more day. NU will try to avoid its first series loss of the season tomorrow, with first pitch set for 11 a.m.

A look back at Nebraska baseball's past five seasons

How it ended: Making their fourth NCAA Tournament appearance in six seasons, the Huskers fell 16-1 to UConn in a Regional elimination game in Oklahoma City.

How it ended: The Huskers concluded the season with an 11-8 win over Illinois. NU didn't earn a postseason bid.

How it ended: Holy Cross defeated the Huskers 7-4 in an elimination game in the Corvallis Regional in Oregon.

How it ended: Western Carolina defeated Nebraska 4-1 in the Clemson Regional.