Three years after he had a five-hit game on the same field as a freshman, Gunner Hellstrom delivered as a senior Saturday when his pinch-hit single in the bottom of the ninth inning lifted the Nebraska baseball team to a 7-6 win over No. 24 Indiana at Bainton Field on the Rutgers campus in Piscataway, New Jersey.

In a wild game that featured Nebraska pitching allowing just three hits but walking 10, Indiana committing five errors, and an hourlong rain delay, the Huskers got back on track after being swept at home last weekend by Rutgers.

"They made plays, they had the big hits in the middle innings, and we just kept coming; we kept answering. And that's the team that we've been essentially for 99% of the year."

The victory improved NU to 21-10 and moved the Huskers within a half-game of Indiana (22-10) for first place in the Big Ten.

Hellstrom's game-winner came off Indiana reliever Reese Sharpe, who had not allowed a run in six previous appearances this season.

The hit capped a back-and-forth afternoon that saw Nebraska jump out to a 4-1 lead before the game was paused because of rain after four innings, only to see Indiana rally with four runs in the fifth inning to take a 5-4 lead.

Nebraska went back ahead 6-5 with two runs in the bottom of the seventh, and Indiana tied it in the eighth when Spencer Schwellenbach walked in a run.

Schwellenbach then worked a 1-2-3 ninth inning to set up Hellstrom's heroics.

Schwellenbach stepped to the plate and worked a one-out walk in the ninth, and Cam Chick followed with an infield single that put runners on the corners. After taking an offensive timeout, Bolt called on Hellstrom, who got his first hit of the season last week.

"Gunner's probably one of the better guys we have at handling the bat," Bolt said. "Gunner was going to give us a really good shot of putting the ball in play. So to his credit, he's stayed ready all year long."

NU scored twice in the second inning, using a single, a sacrifice bunt and an Indiana error to set up Mojo Hagge's RBI groundout. Freshman Jack Steil followed with a double to plate Hagge and give Husker starter Cade Povich an early cushion.

Povich struck out six of the first seven batters he faced and finished with one run with nine strikeouts when the game was paused.

Indiana's only run came on a solo homer off the bat of Cole Barr in the top of the fourth inning as the teams played through intermittent rain showers. Barr also had the big blast in Indiana's four-run fifth, a three-run homer.

What followed led umpires to put the game on hold.

Nebraska scored twice on just one hit in the bottom of the fourth as Indiana committed two errors and threw a wild pitch. The Huskers stole three bases and drew two walks in the inning, with the only hit an infield single from Hagge.

On the wild pitch, Nebraska baserunner Joe Acker hydroplaned several feet past the bag while advancing to third.

"It was just one of those games where we needed to do what it took to win, because that's what we've done all year," Bolt said. 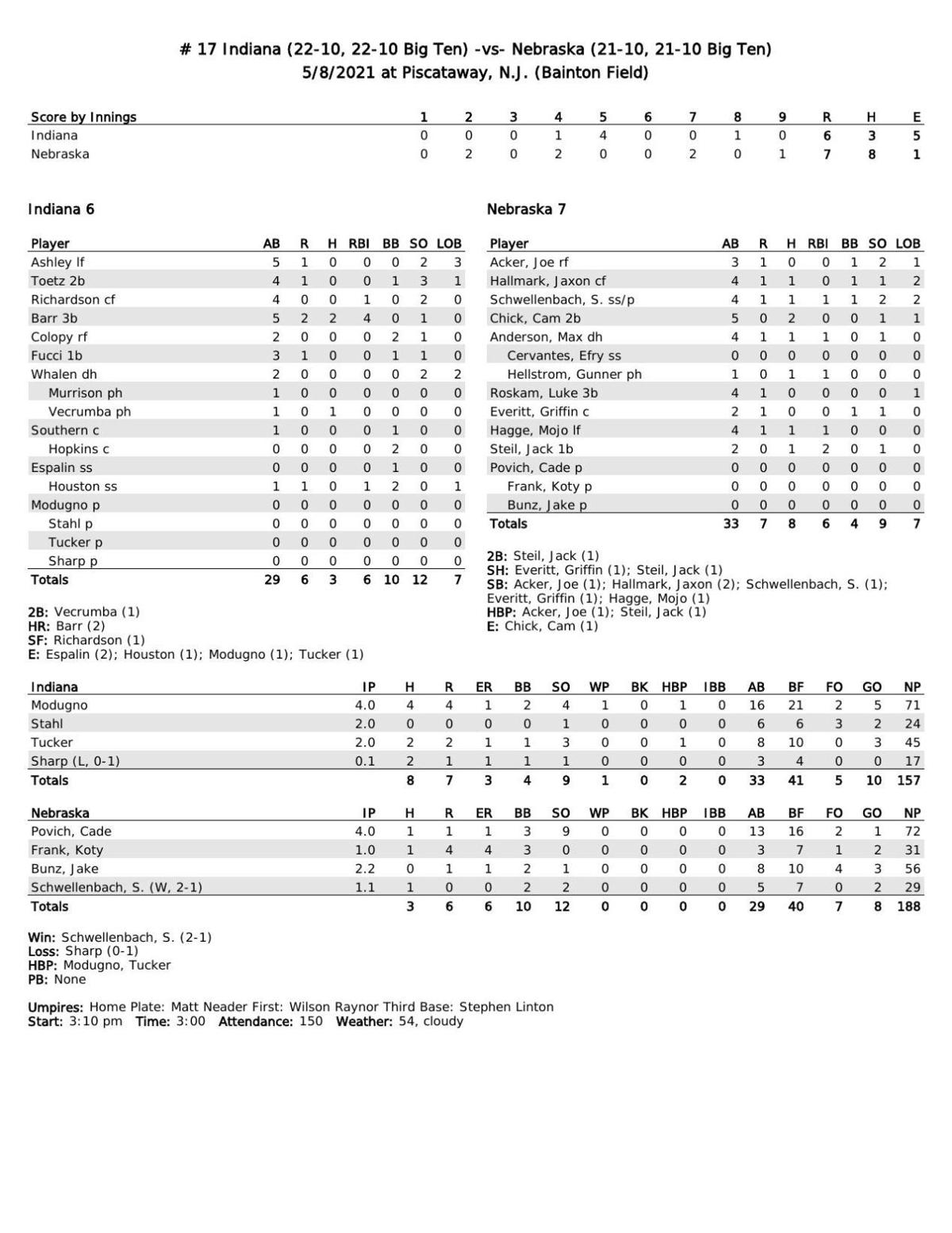 The Huskers blew things open with 12 runs over the final four innings to beat Rutgers. They lost to Indiana earlier in the day.

Will Bolt said Wednesday morning he is "very" confident that Northwestern will be in Lincoln for this weekend's series at Haymarket Park.

When the Huskers needed someone to come through at the plate last Saturday against Indiana, it was Hellstrom off the bench.