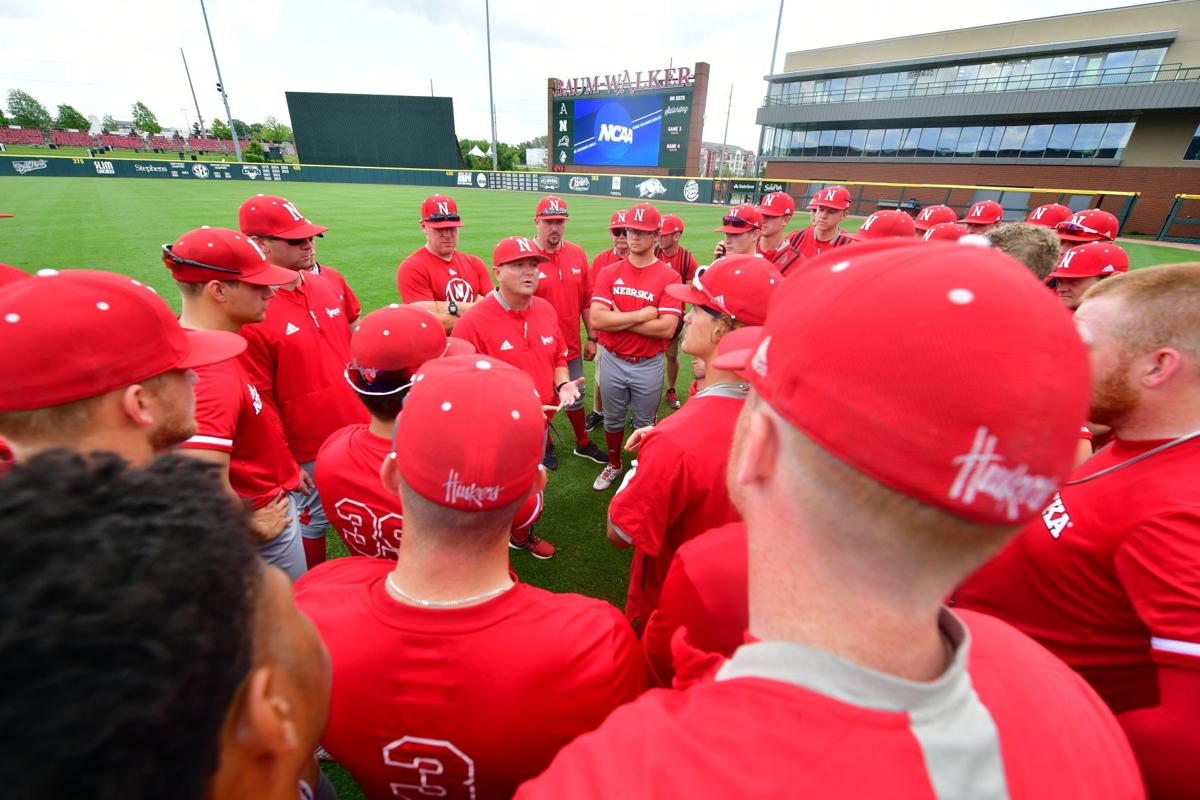 Nebraska's Will Bolt chats with his team during a NCAA Tournament practice last week in Fayetteville, Ark. 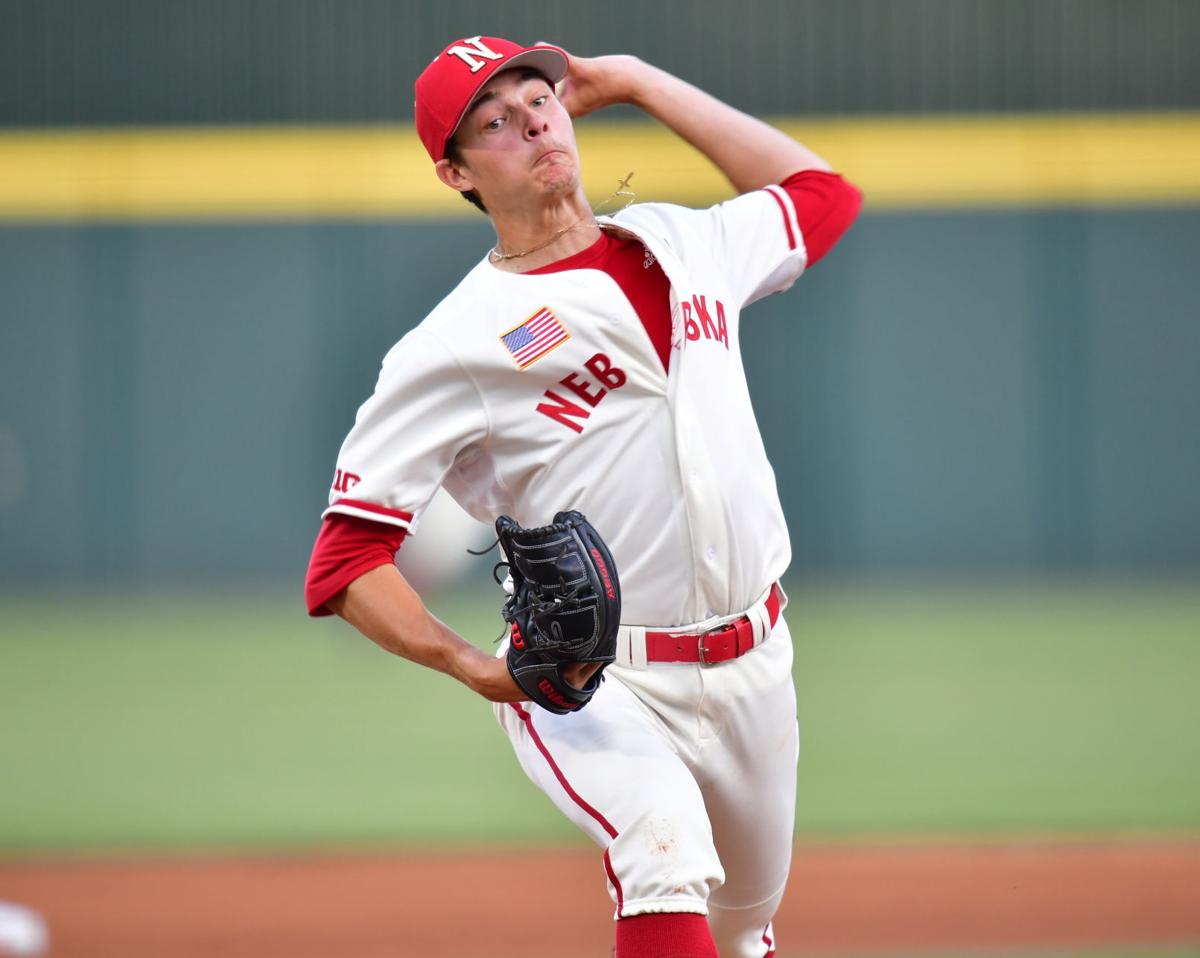 Nebraska pitcher Cade Povich delivers a pitch during an NCAA regional baseball game against Northeastern in Fayetteville, Ark. Povich, who was NU's Friday ace, could hear his name called in the upcoming MLB Draft.

In the minutes after the Nebraska baseball team's season ended in Arkansas, as Razorback fans celebrated their team's escape against the Huskers, the future for NU was already starting to crystallize.

The Huskers had gone toe-to-toe with the nation's No. 1 team, on that team's home field, after rolling through the Big Ten in a conference-only schedule that showed Nebraska was the cream of the crop in its league, but left no comparison for NU nationally.

Nebraska won the Big Ten by 3½ games, clinching the title with one weekend still to play.

Van Horn admitted his nervousness in seeing Nebraska pop up in Arkansas' regional. Then the Huskers forced Monday's game, and wore black jerseys in Baum-Walker Stadium, ready to lead the funeral procession for the top national seed.

The attitude with which Nebraska plays doesn't figure to change as long as Bolt is in charge. And that could be for a while with the head coach set to meet with NU athletic director Bill Moos soon to discuss a future that will almost certainly include a pay increase.

It's no secret that Nebraska's 2021 run lines up pretty well with what happened in Bolt's playing days at NU when, during his junior season, the Huskers went on the road, won a regional, and then pushed a loaded opponent to the limit in super regionals.

Bolt was the MVP of Nebraska's sweep through the Minneapolis Regional in 2000. Then the Huskers, coached by Van Horn, went to California to take on an excellent Stanford team, upsetting the Cardinal in the super regional opener before losing a close winner-take-all game between the teams two days later.

That loss set the stage for back-to-back College World Series appearances for the Huskers.

"It shows you that we’re here. We’re not going anywhere. And I know Coach Bolt, and the rest of the staff, and the guys coming back, and everybody’s going to be there," NU pitcher Cade Povich said after Monday's loss. "This feeling won’t be forgotten. And I think the only way for this team is up. We’re here, and we’re going to be here for a while"

Povich, a junior, will likely have a decision to make on whether to return to NU depending on when or if the left-hander is picked in next month's Major League Baseball Draft. The Huskers almost certainly will lose junior All-American Spencer Schwellenbach, who has gotten some buzz as a potential first-round selection.

But a bevy of young talent returns, led by Big Ten freshman of the year Max Anderson, and fellow freshman Brice Matthews. Not to mention many of that duo's classmates who couldn't get on the field in 2021 thanks to NU's depth and the lack of midweek games. Catcher Griffin Everitt and utility man Cam Chick give NU strength up the middle on defense.

The Huskers will return a solid crop of high-leverage arms in Shay Schanaman, Kyle Perry, Jake Bunz, Koty Frank and Cam Wynne, and will get flame thrower Colby Gomes back from a shoulder injury that kept him out of the lineup in 2021.

And, there's a recruiting class ranked in the top 40 nationally that includes in-state standouts Drew Christo and C.J. Hood, among others, along with South Dakota player of the year Chase Mason.

So the cupboard is far from bare as the Huskers begin to figure out how to back up their 34-14 season and their first regional final since 2007.

"Our guys have gotten pretty close here to getting to the next level. Got to a regional final for the first time in a long number of years, so we’ve got to build on it," Bolt said. "I think the future’s certainly bright, and the seniors and upperclassmen have laid a pretty solid foundation for what’s to come."

For now, Nebraska's players will scatter for summer ball, with a taste of the big stage fresh in their mouths. When they gather in Lincoln come August, the message will be clear.

"We’ve competed extremely hard all year, and that’s all I’m going to continue to ask — (that) we’re going to be one of the hardest-working teams in the country; we’re going to be asked to show up every day and be very consistent, and I think this is certainly a stepping-stone year," Bolt said.

"Getting to a regional final, and having a shot to win in the late innings against the No. 1 team in the country, I think the needle is definitely pointing up."

The Millard West product, already named the Big Ten freshman of the year, hit .332 with seven home runs this season.

A line of barriers now stretches along 10th Street in front of Omaha's CHI Health Center to protect pedestrians. Others have been placed in various spots around TD Ameritrade Park.

Will Bolt expects Spencer Schwellenbach to pursue a pro career, calling it a "foregone conclusion" he will be a high draft pick.

In a typical year, the College World Series would boast opening ceremonies, fireworks, autograph sessions and open practices. But this is not a typical year.

Boys athlete of year: Sure, Christo excels in three sports, but his numbers off the field may be more impressive

Christo thought football was his sport until the end of his sophomore season. Next month, he'll be mulling over a pro baseball contract.

Will Bolt makes it clear. The next step for his Husker baseball program is to host a regional

"The expectation year in and year out should be to host a regional (and) have a chance to go to Omaha."

Will Bolt has been rewarded for piloting the Nebraska baseball team to one of its most successful seasons in recent history.

Nebraska's Will Bolt chats with his team during a NCAA Tournament practice last week in Fayetteville, Ark.

Nebraska pitcher Cade Povich delivers a pitch during an NCAA regional baseball game against Northeastern in Fayetteville, Ark. Povich, who was NU's Friday ace, could hear his name called in the upcoming MLB Draft.