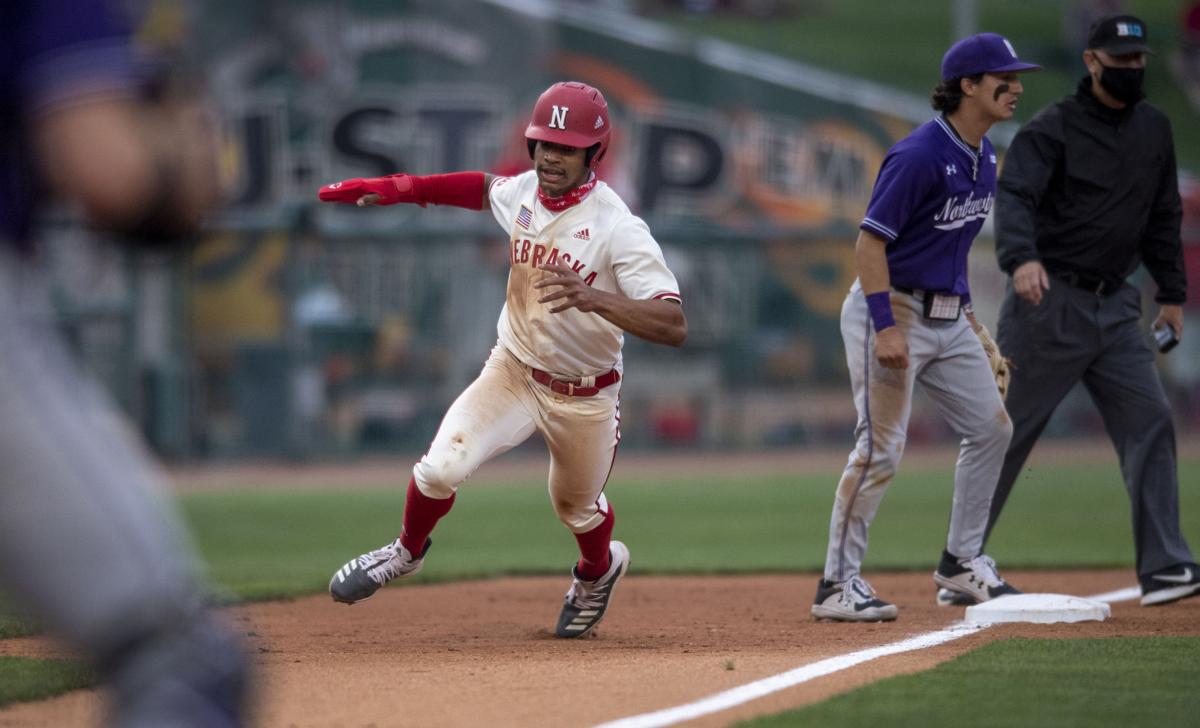 Nebraska’s Brice Matthews rounds third on his way to scoring on a hit by Griffin Everitt in the fifth inning of a Big Ten game against Northwestern on Friday at Haymarket Park. 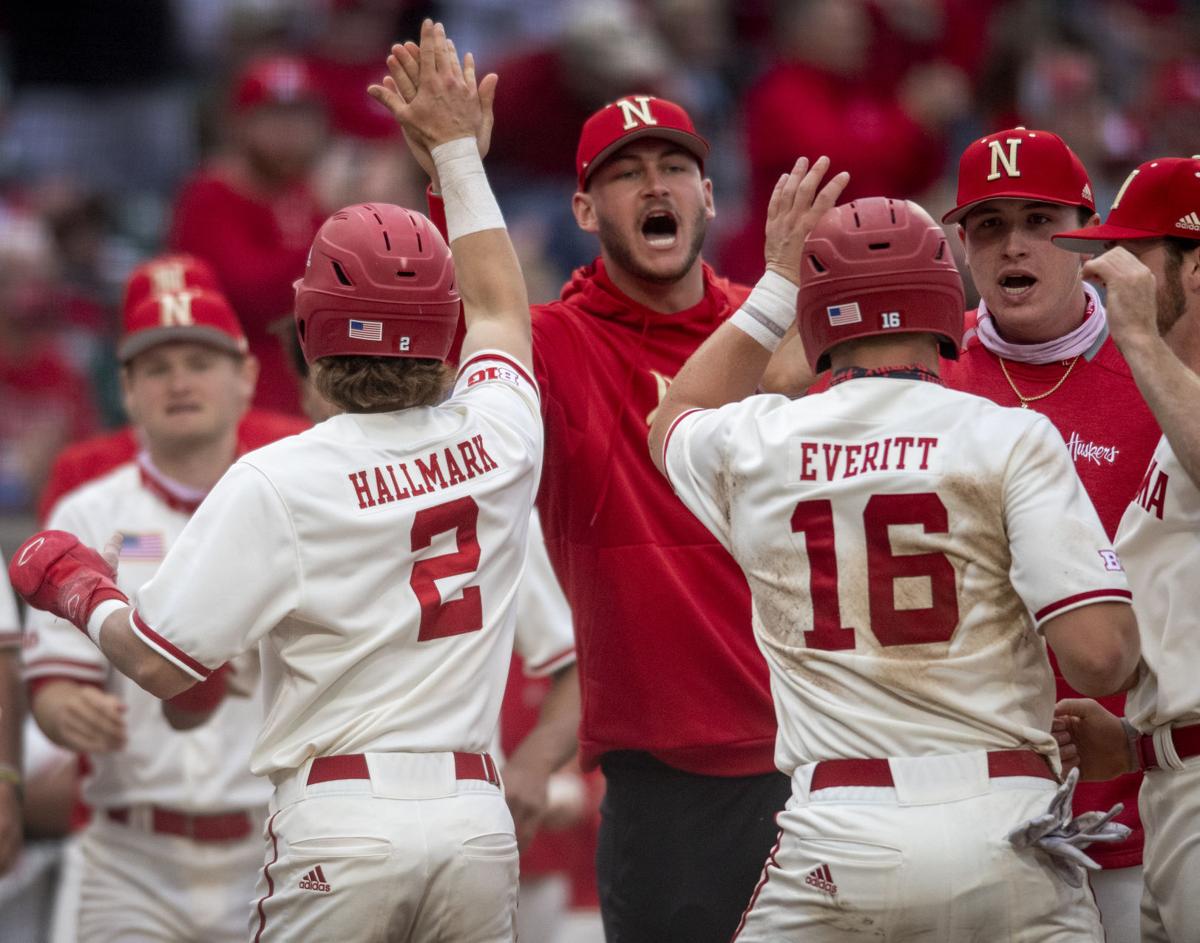 Nebraska’s Jaxon Hallmark and Griffin Everitt score on a hit by Spencer Schwellenbach in the fifth inning against Northwestern on Friday at Haymarket Park.

Cade Povich has a pregame tradition.

The Nebraska left-hander eats Skittles before each one of his starts, munching on the candy in Nebraska's clubhouse before heading out to the field.

"Skittles were on point today," Povich said with a grin Friday night.

So was Nebraska's ace.

Less than a week after a rain delay forced him to abandon a dominant start against Indiana, Povich put the clamps on a Northwestern offense that came in leading the nation in home runs per game, leading the Huskers to a 12-2 win.

The Bellevue West product held Northwestern to two hits and three total baserunners, and Povich picked off two of those baserunners. He struck out five with no walks in seven innings of work.

"Man, would have loved to keep that game (against Indiana) going, and I think it's just one of those things where it's tough luck and move on to the next one," Povich said after matching his season high with seven innings pitched. "But I think the mindset I was able to get from that game and carry on over to this one helped out a lot."

If a 12-2 win can be workmanlike, the Cornhuskers accomplished the feat Friday night.

Taking advantage of a short-handed Northwestern team coming off a two-week COVID-19 pause, Nebraska blew things open in the back half of the game to roll past the Wildcats in front of 3,058 at Haymarket Park.

Well short of the full allotment of 32 players teams can travel to road games this season — one count in the press box had the Wildcats with 25 total people in their dugout including coaches and staffers — Northwestern gave a freshman with a .143 batting average his first career start at designated hitter, and a senior hitting .077 manned center field.

On the mound, the Wildcats had Mike Doherty, who came in with a 2.86 ERA, and not much else.

Doherty and reliever Parker Hanks were forced to wear the damage inflicted by a Nebraska offense that came in ranked second in the Big Ten in scoring as the Huskers scored three runs in the fifth, three more in the sixth, and five in the seventh.

Doherty allowed season highs in hits (10) and runs (seven) after he began to tire midway through the game.

Not that Nebraska was apologizing for any of it.

"They've got some guys that are out, there's no doubt about it," Nebraska coach Will Bolt said. "But they're here, and they had their Friday night guy on the mound. So we've got to show up tomorrow ready to compete."

After Michigan beat Indiana 10-3 earlier in the day to push Nebraska percentage points ahead of both teams for first place in the conference, the Huskers (24-11) did what they needed to stay in that spot.

"I thought the fastball was as good as we've seen it in a while," Bolt said of Povich's outing. "Just in complete command of the game. I thought his stuff was good, compete was good, attack was good."

Run support was no issue as eight of Nebraska's nine starting batters had at least one hit. The bottom two hitters in the order, Brice Matthews and Griffin Everitt, combined to go 6-for-9 with six RBIs and five runs scored.

That included Matthews hitting a pair of doubles in a 3-for-5 night, while Everitt blasted a 393-foot home run in the seventh inning while finishing 3-for-4. Matthews used his speed to turn a mega chopper to shallow left into a double, while Everitt's blast cleared the trees on top of Haymarket Park's left field berm.

"We weren't too focused on (Northwestern's) situation, really," Everitt said. "We're just worried about coming in and doing our thing, taking care of what we have to do. And we know if we do that, we're a hard team to beat."

The lopsided margin allowed Bolt to rotate some lesser-used players into the game.

Lincoln Southwest graduate Luke Sartori got in on the fun, turning his first at-bat as a Husker into a two-out, RBI single on a 3-2 count in the seventh inning. And Leighton Banjoff, who hadn't played since injuring a finger three weeks ago against Michigan State, singled and scored in the seventh as well.

"That's awesome to see," said Everitt, himself a Lincoln Southwest grad. "We all love each other, we all love this team. We want to see everyone have success. And Sartori getting his first college hit tonight, I was really proud of him." 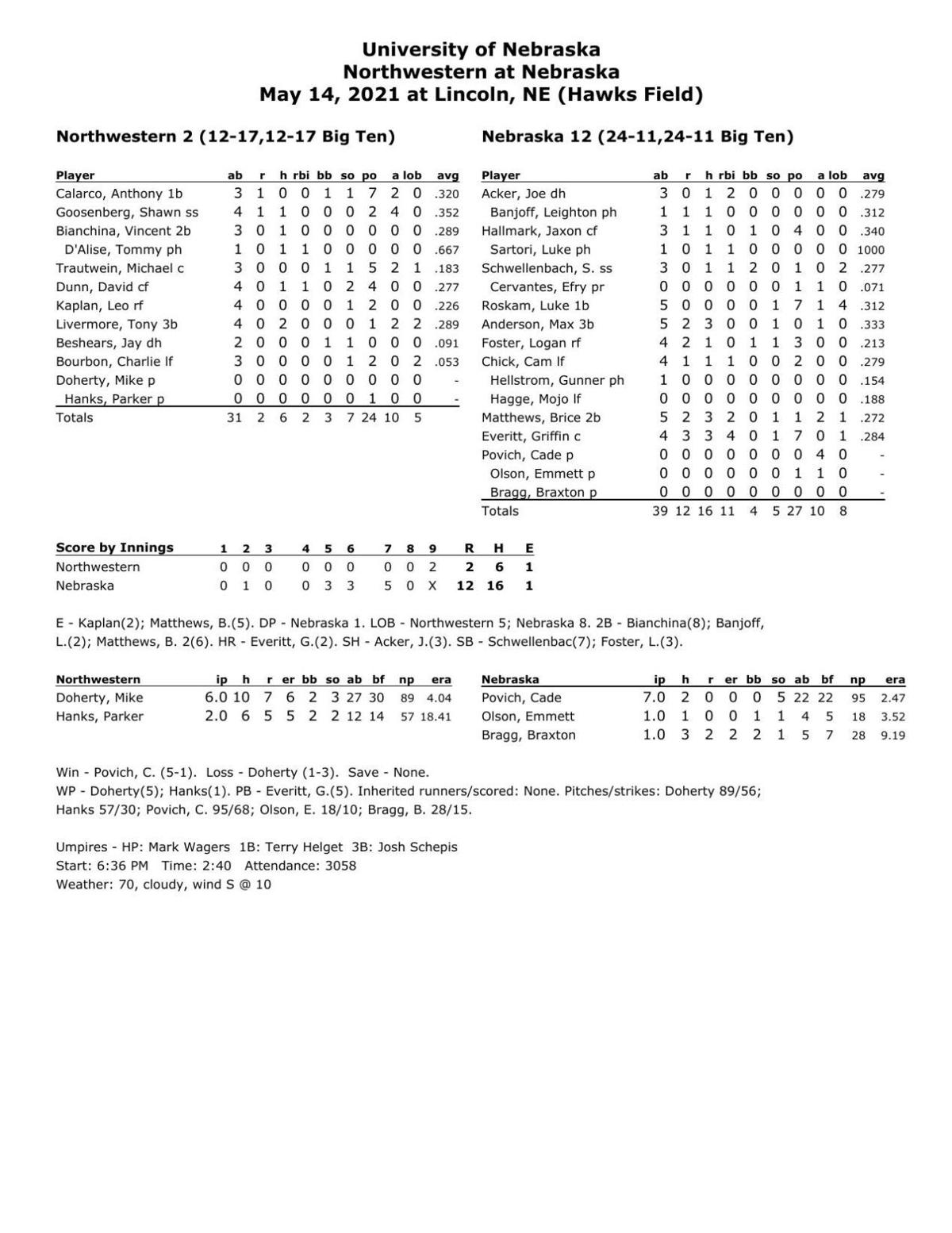 Husker Extra Podcast: The calm before the storm in football recruiting; NU will not host baseball regional

Parker Gabriel and Chris Basnett talk about the lull in the college football world before a wild June of recruiting visits and workouts begins.

When the Huskers needed someone to come through at the plate last Saturday against Indiana, it was Hellstrom off the bench.

'An odd, eerie feeling': Huskers rally to knock off depleted Northwestern before series finale is canceled

The Huskers earned some conference recognition ahead of a weekend that offers a chance to play in front of a national audience.

The NCAA will allow full capacity at baseball championship events at venues if local and state guidelines allow for it.

Of the Huskers' four games at the Indiana pod, three will be on national television: two games on BTN and another on ESPNU.

Nebraska’s Brice Matthews rounds third on his way to scoring on a hit by Griffin Everitt in the fifth inning of a Big Ten game against Northwestern on Friday at Haymarket Park.

Nebraska’s Jaxon Hallmark and Griffin Everitt score on a hit by Spencer Schwellenbach in the fifth inning against Northwestern on Friday at Haymarket Park.