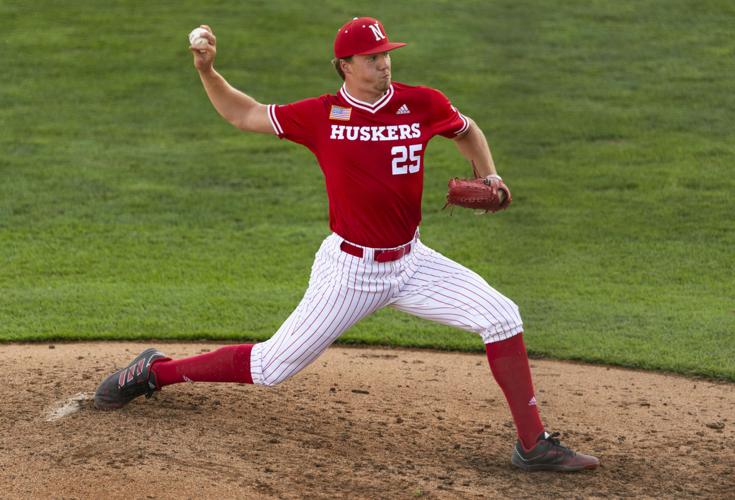 Nebraska's Drew Christo throws a pitch during the seventh inning of Game 1 of the Red-White Series on Oct. 11 at Haymarket Park. 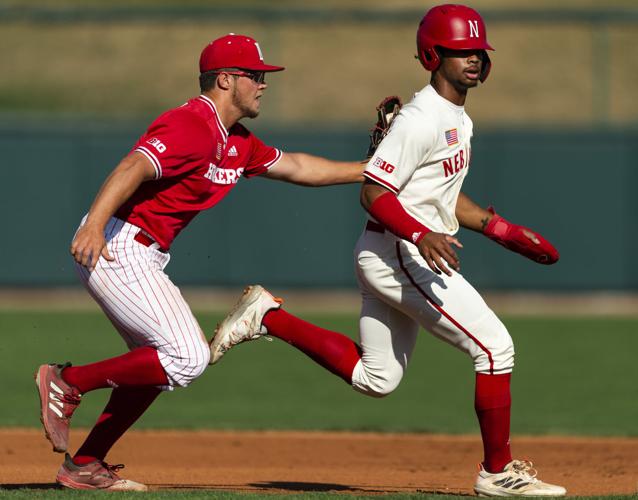 Nebraska's Brice Matthews gets tagged out by Max Anderson during the first inning of Game 1 of the Red-White Series on Monday at Haymarket Park.

Koty Frank threw five shutout innings and struck out seven to lead his Red team to a 4-1 win over the White squad in the first game of the Nebraska baseball team's Red-White series at Haymarket Park.

Frank gave up just two hits and didn't walk anyone during the seven-inning game.

Lincoln Southwest product Luke Sartori, a transfer from Hutchinson Community College, went 3-for-4 with two RBI and a run scored to power the Red offense. Redshirt freshman Garrett Anglim of Papillion and true freshman Max Peterson, also a Lincoln Southwest alum, each had a hit and scored a run.

Max Anderson was 1-for-3 with a double, and opened the scoring with a sac fly to deep center in the third inning.

Sartori's two-run single in the fourth inning gave the Red a 4-0 lead.

The White's only run came in the bottom of the seventh, when freshman Josh Caron greeted classmate Drew Christo with a first-pitch home run to dead center.

'Whatever it takes': No matter where he's needed, Kyle Perry is ready to dive in for Husker baseball

The series continues Tuesday and Wednesday, with first pitch for both days scheduled for 3:30 p.m.

Admission is free, and limited concessions are available. The games are will also be streamed on Nebraska baseball's Facebook and Twitter accounts.

Griffin Howell, a right-hander from Tecumseh, Ontario, announced on social media Monday he would play his college ball for the Huskers.

Howell becomes the second Nebraska recruit north of the border in the 2023 class, joining outfielder Matt Evans, and the fourth Canadian (Core Jackson, Caleb Clark) to pledge to Will Bolt's program since the 2021 cycle. He is the seventh player to commit to Nebraska's 2023 class,

Howell, 16, has a fastball that tops out at 89 mph and sits around 86, according to Prep Baseball Report.

I’m extremely thankful & excited to announce that I will be continuing my baseball career & academics at the University of Nebraska. I’d like to thank my family, teammates, & @WindsorSelects coaches for their support. GO HUSKERS!🌽 #GBR #BoltEra⚡️@Husker_Baseball @LanceHarvell pic.twitter.com/ge4y3HgFTo

Photos: Take in the sights from Haymarket Park, where Nebraska split up for Game 1 of the Red-White Series

A Ravenna native, Chris Basnett joined the Journal Star in 2016 and has more than 20 years of experience covering prep, college, and professional sports.

The scrimmage is scheduled for a noon start at Haymarket Park and will be open to the public.

One of the notes revolves around the team's CWS hopes: "It's in the weight room where I've got to go write 'Omaha' on the whiteboard."

Unger made six pitching appearances as a freshman at Blair, finishing with 1.14 earned-run average.

The final seven-inning game of the Red-White Series is Wednesday; it's tied 1-1.

Pitching dominance in Red-White series 'a good reminder' for Will Bolt, Huskers

Pitchers having the upper hand was a welcome sight for Bolt, who saw Nebraska's hitters outperform the pitchers for much of the fall.

Coach Will Bolt got a look this fall at the Husker baseball team that must replace all four captains from last year's team.

Over two seasons with in juco ball, Dreher made 24 appearances out of the bullpen. His strikeout rate was, well, impressive.

Nebraska's Drew Christo throws a pitch during the seventh inning of Game 1 of the Red-White Series on Oct. 11 at Haymarket Park.

Nebraska's Brice Matthews gets tagged out by Max Anderson during the first inning of Game 1 of the Red-White Series on Monday at Haymarket Park.