The Nebraska baseball team didn't do much on offense, but when it mattered the Huskers did enough.

Coming into the game hitting .304 with runners in scoring position, Nebraska spent the first seven innings wasting opportunities against a Penn State staff with a 5.52 ERA.

The Huskers had two runners thrown out on the basepaths in the first four innings. In the seventh, NU loaded the bases with none out, then saw its No. 3, No. 4 and No. 5 hitters all strike out to erase the threat.

"Not at all. Of course you're in the moment there, and not happy with what happens," Nebraska coach Will Bolt said on the Husker Sports Radio Network. "But what we ended up doing was coming back and putting up a five-spot in the next inning."

NU indeed was still in position, answering Penn State's two-run sixth inning with one run in the seventh. Then in the eighth, the Huskers used four singles and two bases-loaded walks to score five runs.

"That tells you all you need to know about this team," Bolt said. "We're just going to keep coming, we're going to keep showing up, and we put the ball in play when we needed to."

The big knock came from Cam Chick, who delivered a two-run single on a full count with two outs. It was a bit of redemption for the junior, who was 0-for-4 with three strikeouts before delivering late.

Both of Penn State's (8-14) runs came with two out in the sixth inning off starter Cade Povich, who didn't factor in the decision despite scattering eight hits and striking out six over 5 2/3 innings.

Of Nebraska's 14 hits, 12 were singles. Jaxon Hallmark delivered a triple and a double while finishing 2-for-3 with two walks, two RBIs and a run scored. Luke Roskam, Leighton Banjoff and Brice Matthews all added two hits apiece.

"You have a game where you can look back and say there's a lot of woulda-coulda-shouldas," Bolt said, "but you score eight runs on 14 hits."

The teams will have a quick turnaround, playing at noon Saturday. 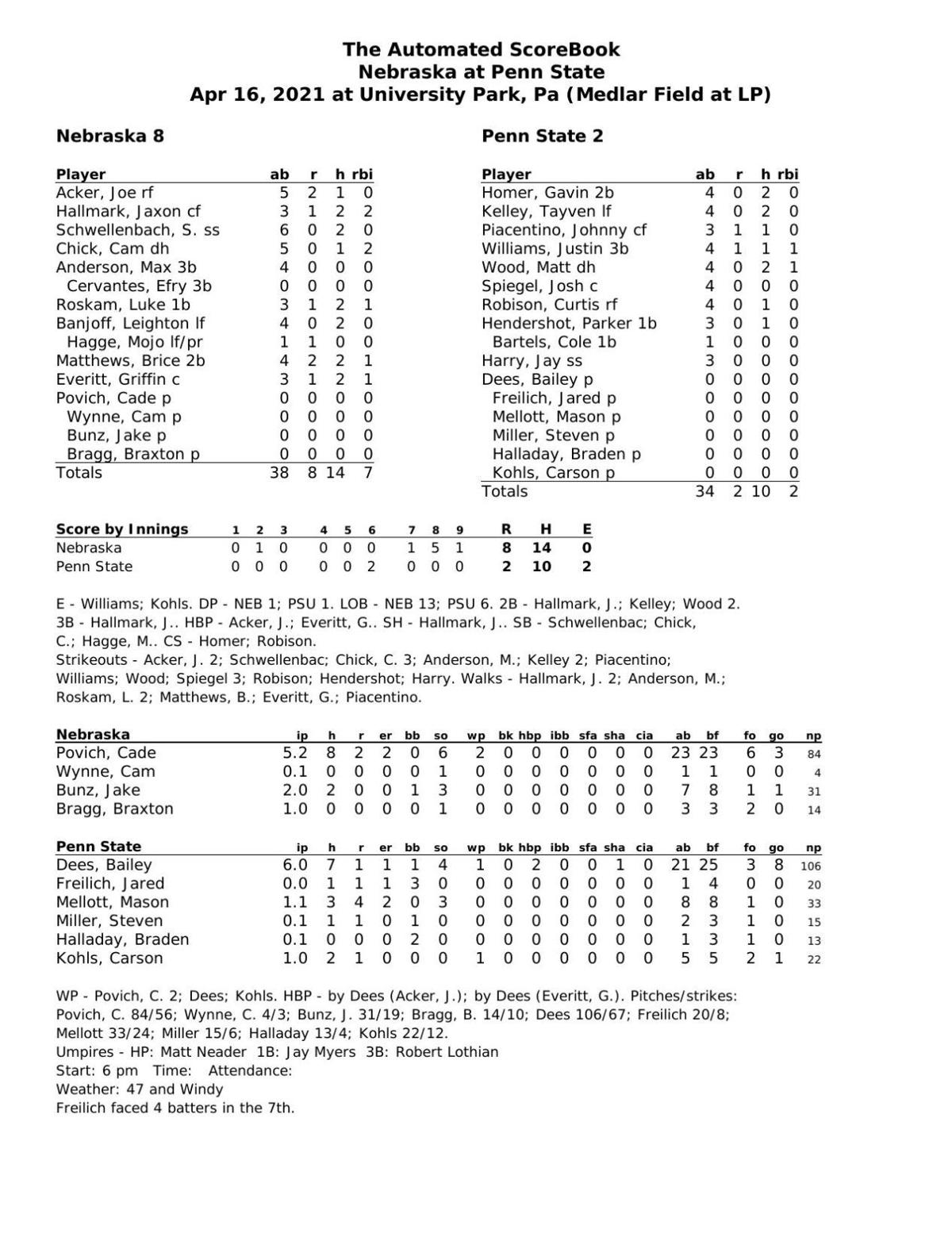 Coach Will Bolt: "We've got to take every win we can get. It doesn't matter what it looks like at the end of the day."