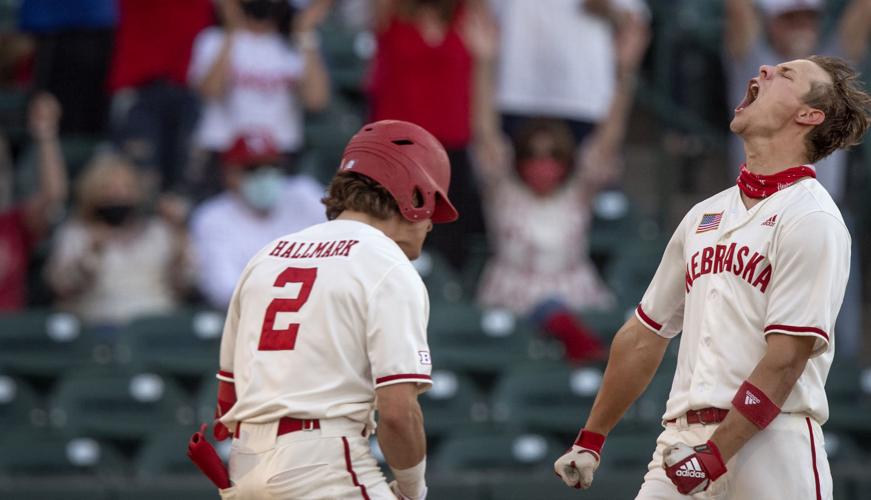 Nebraska’s Joe Acker (right) celebrates his inside-the-park home run as he crosses the plate with teammate Jaxon Hallmark coming to bat against Rutgers at Haymarket Park on April 30. 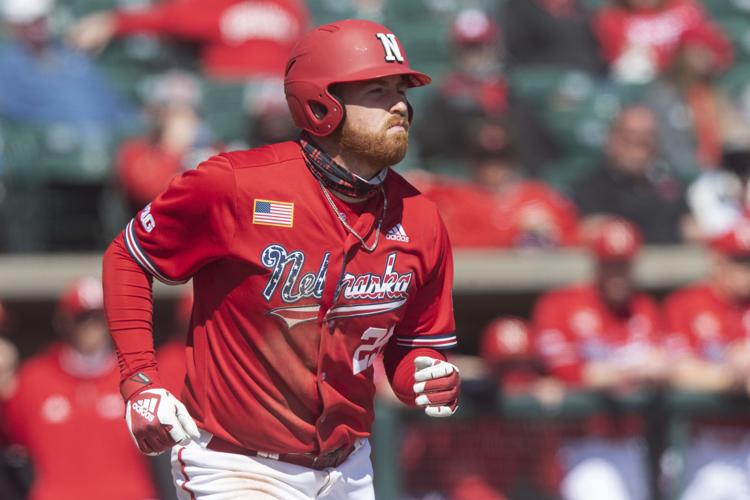 Nebraska's Luke Roskam makes his way to first base after being walked in the seventh inning against Minnesota on March 28 at Haymarket Park.

Will Bolt looks to one critical area if he's assessing the culture of a sports organization.

How well do veterans on the roster treat younger players?

"If they treat them as part of the team, part of the family, that's always the biggest part of it," the second-year Nebraska baseball coach said Wednesday as his team prepared for this weekend's home series against Michigan (26-15) to end the regular season.

The Big Ten preseason poll that didn't have NU in the top six? 'They may have leaned on that a little bit'

When Bolt took over the Husker program in the summer of 2019, he quickly noticed there were high-character upperclassmen — players recruited by previous coach Darin Erstad.

"They've been part of a little bit of the ups and downs of college baseball at times," Bolt said. "They were great students, great in the community, just great kids and a lot of fun to be around. They welcomed our staff with open arms when we got here and were very coachable and very willing to help us establish and continue the good culture that was already here.

"These freshmen now, when we talked to them at the end of their fall meetings, they said the upperclassmen made them feel at home right away. That's just huge. It's so important. Because now these guys, when they get (older), they know how they were treated and they're going to treat the guys the same way, and that's how you establish a strong culture."

Bolt's assessment speaks to a prominent reason why Nebraska (29-11), ranked 19th by Baseball America and 20th by D1Baseball.com, was able to clinch the Big Ten championship Sunday with three games left in the regular season.

It's also a reason why Nebraska, winners of nine of its last 10 games, should probably be regarded as a dangerous team to face in the NCAA Tournament. The field will be announced Monday.

The Huskers' 2021 roster lists nine seniors, each of whom will get to take one heck of a bow (figuratively speaking) this weekend before anticipated big crowds at Haymarket Park, as fans look to help the team celebrate a conference championship.

Outfielders Joe Acker and Mojo Hagge and catcher/infielder Luke Roskam are "Super Seniors" who took advantage of the NCAA's pandemic-driven decision to allow seniors to play an extra season, since most of the 2020 season was wiped out. Each was in the lineup Sunday as Nebraska clinched the league title with a 9-0 dismantling of Ohio State.

Among the other seniors, Jaxon Hallmark leads the team with a .343 batting average and 15 stolen bases (in 18 attempts), and right-hander Chance Hroch has been a weekend starter all season, going 5-1 with a 4.08 earned-run average. Although catcher Gunner Helstrom is hitting only .133, he's supplied a rock-solid veteran presence for a team breaking in more than a dozen new players this season.

"Those are things good teams have. With this team, we've been very fortunate. We've got some guys, the upperclassmen, I just can't say enough good things about those guys and what they've brought to the team."

Nebraska, with a ton of late-season momentum, used Monday as a travel day, then took Tuesday off before returning to practice Wednesday.

With a conference championship wrapped up, it's easy to wonder if Nebraska might let off the gas a bit. Bolt, however, doesn't sound concerned in that regard.

"Our motivation is we need to show up and play our best baseball," he said. "That's motivation enough."

In a sense, Bolt said, Nebraska's daily approach isn't all that interesting: Show up and be your best.

"It's kind of boring, but it's the way this team has approached it," he said. "Our motivation this weekend is we're going to have Husker fans out at our ballpark. It's our last home games that are guaranteed this spring, and we need to play well.

"We're playing a quality opponent, a very well-coached opponent who's going to be fighting for their postseason lives. Our motivation is we get to play baseball. These guys love to play."

Frost, Moos and other Husker coaches to take part in statewide Big Red Blitz in June

Moos: "Our coaches and staff look forward to this exciting opportunity to hit visit all parts of the state and spend time with our great fans."

He pitched his first complete game as a Husker, struck out 10 and allowed one run in NU's 3-1 win against the Hoosiers.

The only Big Ten team in the Baseball America poll, Nebraska is 9-1 in its last 10 games, including a current eight-game winning streak.

Pat Logsdon, who has served in a variety of roles during her 42-year career at NU, has served as the school's senior woman administrator since 2008.

Nebraska's Michael Hoffer set a personal best in the long jump Wednesday at the NCAA West Preliminary Round in College Station, Texas, to qual…

Husker coach Will Bolt says his players don't worry at all about getting thrown out when taking chances, a change from last season.

Steven M. Sipple: The mess is real: Transfer portal is turnoff fraught with issues, but what now? And, other mailbag questions

The transfer portal turns up as a subject in this week's mailbag, as does Mike Riley as well as an interesting (and misleading) Husker rushing stat.

Big Ten title wrapped up, Povich and Huskers still bring it in series-opening win against Michigan

If the Nebraska baseball team used this weekend to bask in its Big Ten title-winning season with thousands of Big Red supporters, it didn't show.

Nebraska’s Joe Acker (right) celebrates his inside-the-park home run as he crosses the plate with teammate Jaxon Hallmark coming to bat against Rutgers at Haymarket Park on April 30.

Nebraska's Luke Roskam makes his way to first base after being walked in the seventh inning against Minnesota on March 28 at Haymarket Park.