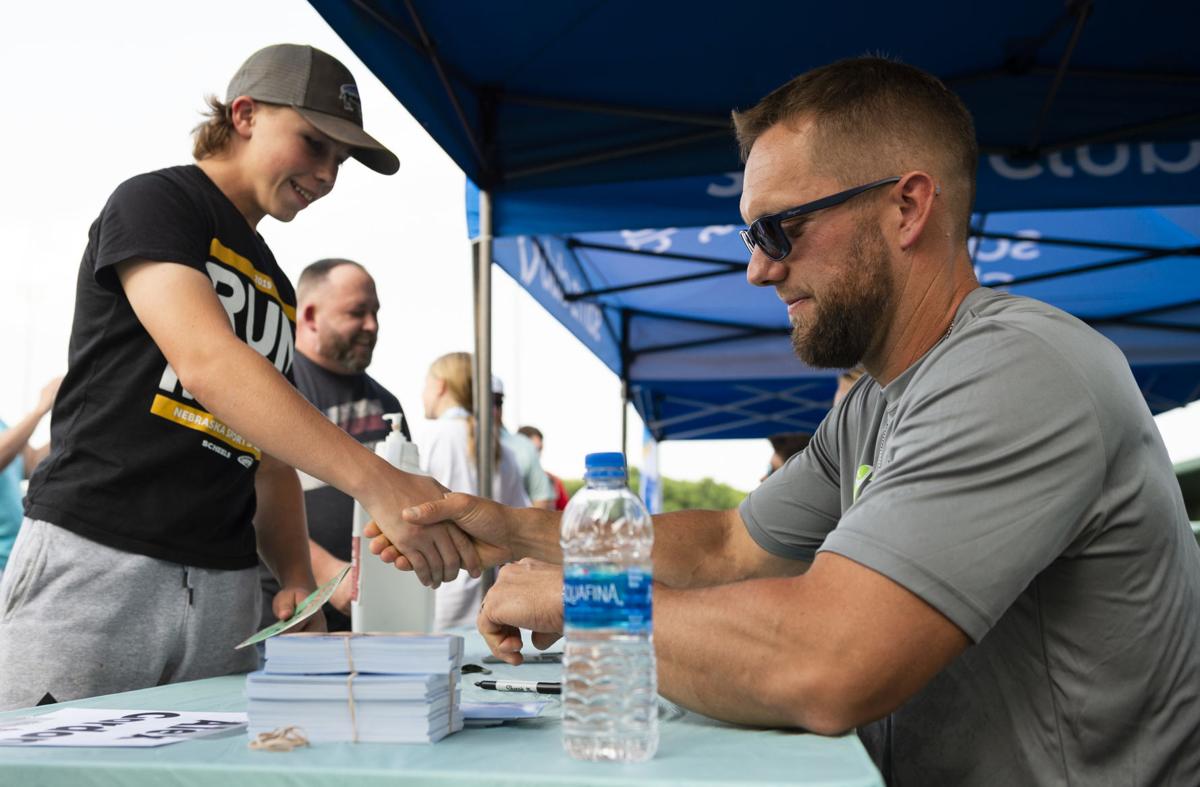 Theron Mlnarik (13) shakes hands with Alex Gordon during the opening ceremonies of the Cornhusker State Games on Friday at Seacrest Field. 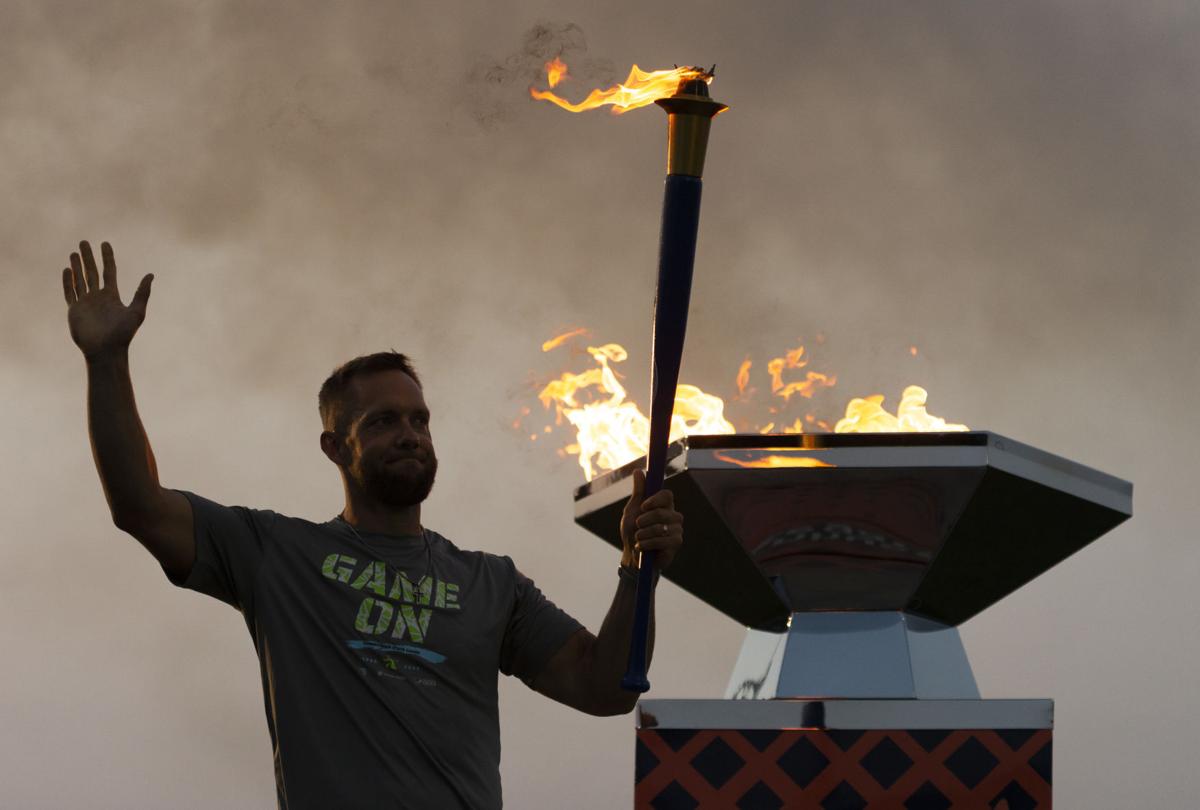 Alex Gordon waves to the crowd after lighting the cauldron during the Opening Ceremonies of the Cornhusker State Games on Friday at Seacrest Field. 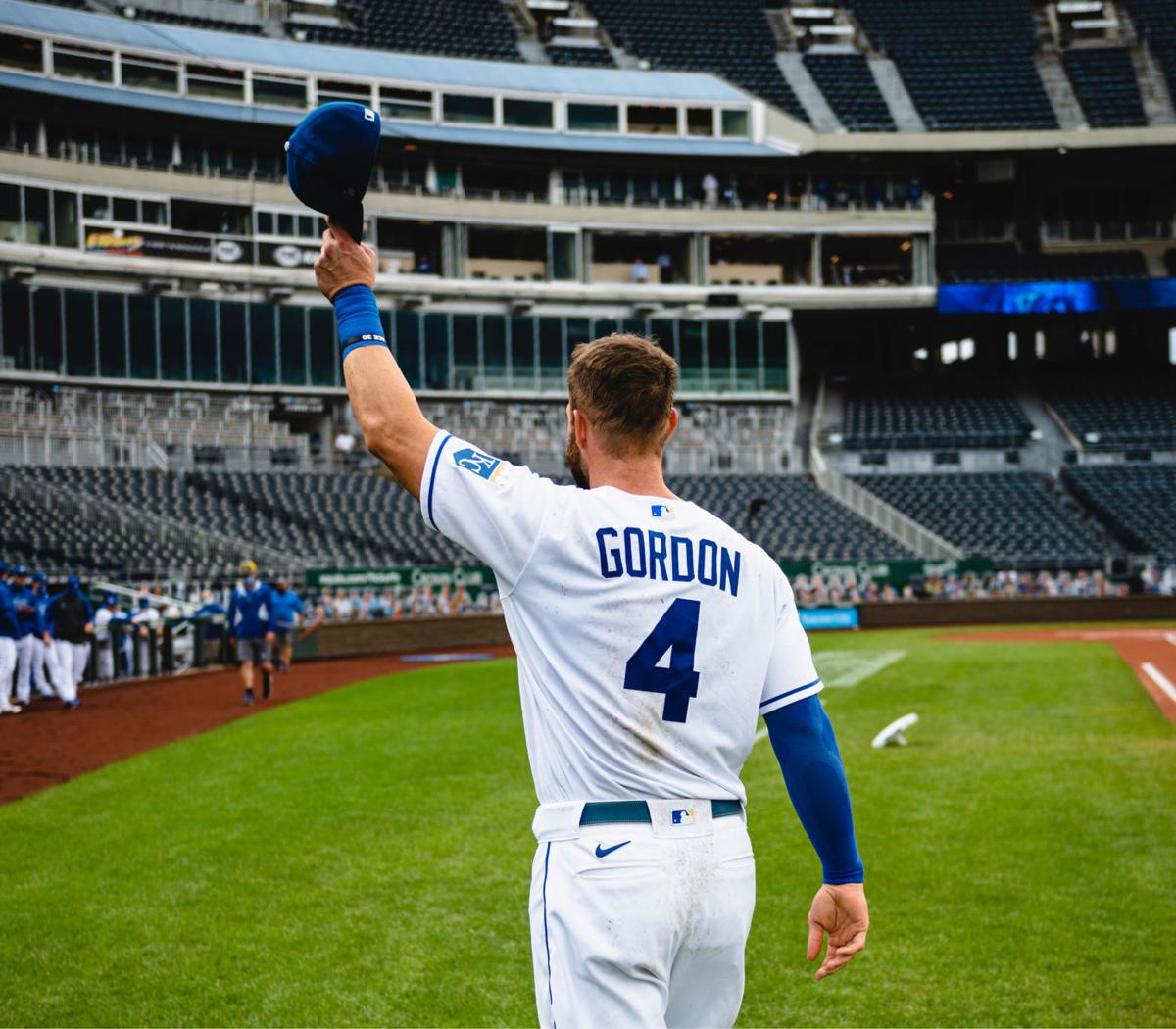 Yes, he misses baseball "a little bit." And, 10 months in, he's still getting a feel for retired life. But, it's clear he's enjoying a looser schedule.

Steven M. Sipple: Reminiscing on a local legend: 'There was something different about Gordo'

“I’ll tell you, baseball, playing 162 games a year, you’re always 'on,'" Gordon said Friday before taking the field as the torch lighter for the Cornhusker State Games. “I’ve missed a lot of family time and things like that over my 14-year career so I am catching up on life, my three kids and my family.”

He's not letting his hair down too much after retiring at the end of last season. He still wakes up at 5:30 a.m. to work out. He looks like a guy who could work a count and deliver a timely hit tomorrow if you needed him to.

If you know anything about Gordon, that doesn't register as a surprise.

Gordon is on the short list when considering some of the best athletes to come from the state. He starred at Lincoln Southeast before going on to lead the Nebraska baseball team to a College World Series appearance in 2005, which is the last time the program has reached the CWS.

He's also one of the most beloved figures in Royals history. He was at the center of a run that captivated a starved city, ultimately reaching its peak with a World Series title in 2015. His career arc is the way these things are supposed to happen.

His longtime manager Ned Yost once called him the "mold for a perfect player."

The post-baseball Gordon still lives in Kansas City. Maybe that makes sense. He's beloved there. Fans lined up to see him throw a ceremonial first pitch before a game in April. Some called for a statue when he retired.

“It’s kind of our home now,” Gordon said. “I spent 15-20 years there. We’ve built a foundation there with friends and our kids have activities, school, stuff like that. We miss Lincoln and Nebraska, but Kansas City is close enough that we can come back and forth, so it’s a good setup that we have.”

Like many of us, Gordon was fixated on Husker baseball in June. Fresh off a Big Ten title, Nebraska made a run to a regional final, where it pushed national top seed Arkansas to a winner-go-home showdown in Fayetteville.

When Gordon watches, it packs an extra sentimental punch.

“It was really cool," he said. "It’s good to see Nebraska baseball on that big stage again. Having Will Bolt be the coach, who I didn’t play with — I missed him by a year — but I’m still good friends with him and having Jeff Christy as assistant coach, I was pretty much roommates with him in college, so it’s just great seeing those connections and Nebraska doing well again.”

As for future endeavors, Gordon is keeping his cards close to the vest. But, don't rule out a return to baseball in some form or fashion.

“I’m sure at some point I will," Gordon said. "I’ve only been retired four months so I am sure when that time comes, I will. I’m just enjoying the free time in the family but I am sure something with baseball will come about.”

Photos: With a light of the torch, the Cornhusker State Games begin at Seacrest Field

The Kansas City Royals left fielder also was named the best defensive player at his position in 2011, ’12, ’13 and ’14, in addition to winning the past four awards.

He will leave the game as one of the most beloved figures in Royals history, 15 years after his titanic home runs made him a Husker legend.

This weekend, more than 500 participants have signed up to compete in a variety of video games that are played in front of spectators at Pinnacle Bank Arena.

Back in the day, July 25, 2012: Rosenblatt Stadium demolition begins

Demolition of Rosenblatt Stadium began at 10:11 a.m. nine years ago today. About 50 people gathered to watch as Anderson Excavating of Omaha began demolishing the 64-year-old structure.

Theron Mlnarik (13) shakes hands with Alex Gordon during the opening ceremonies of the Cornhusker State Games on Friday at Seacrest Field.

Alex Gordon waves to the crowd after lighting the cauldron during the Opening Ceremonies of the Cornhusker State Games on Friday at Seacrest Field.