The Nebraska bench celebrates as relief pitcher Jake Bunz strikes out a Maryland player following the ejection of head coach Will Bolt in the seventh inning Sunday at Haymarket Park. 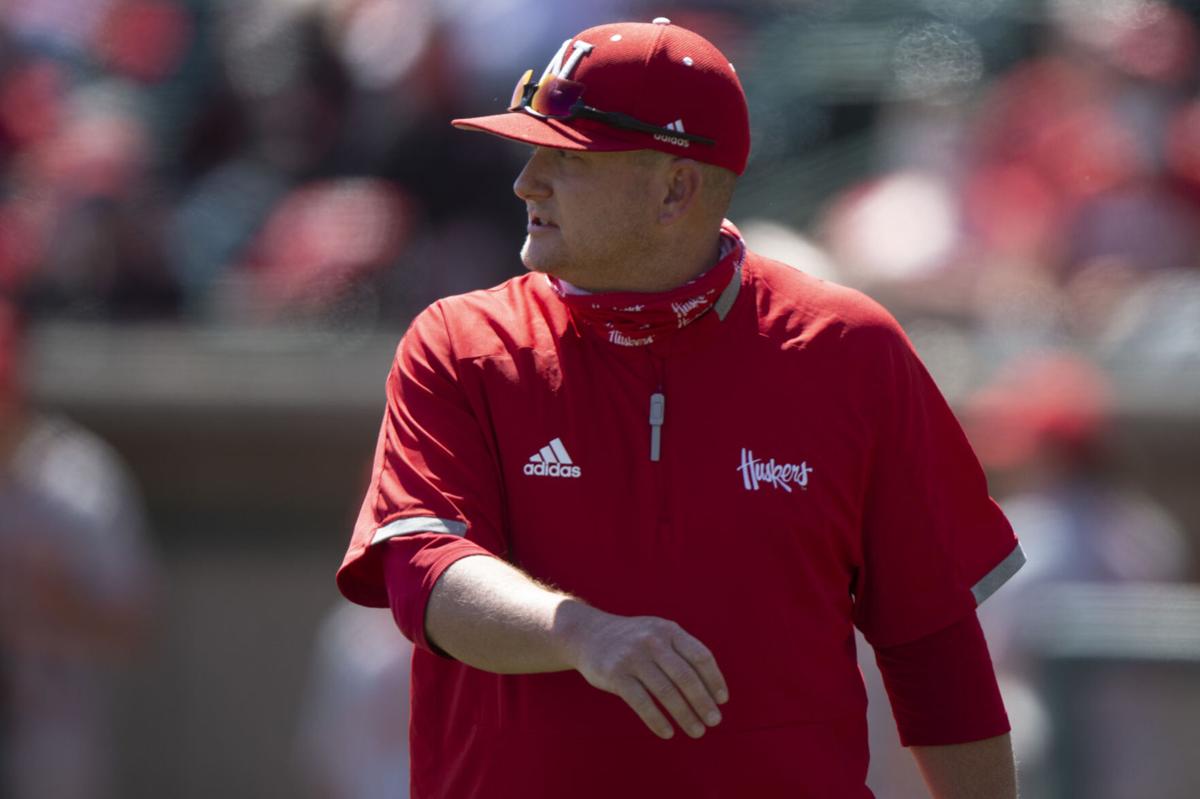 Nebraska head coach Will Bolt is ejected from Sunday's game against Maryland at Haymarket Park. 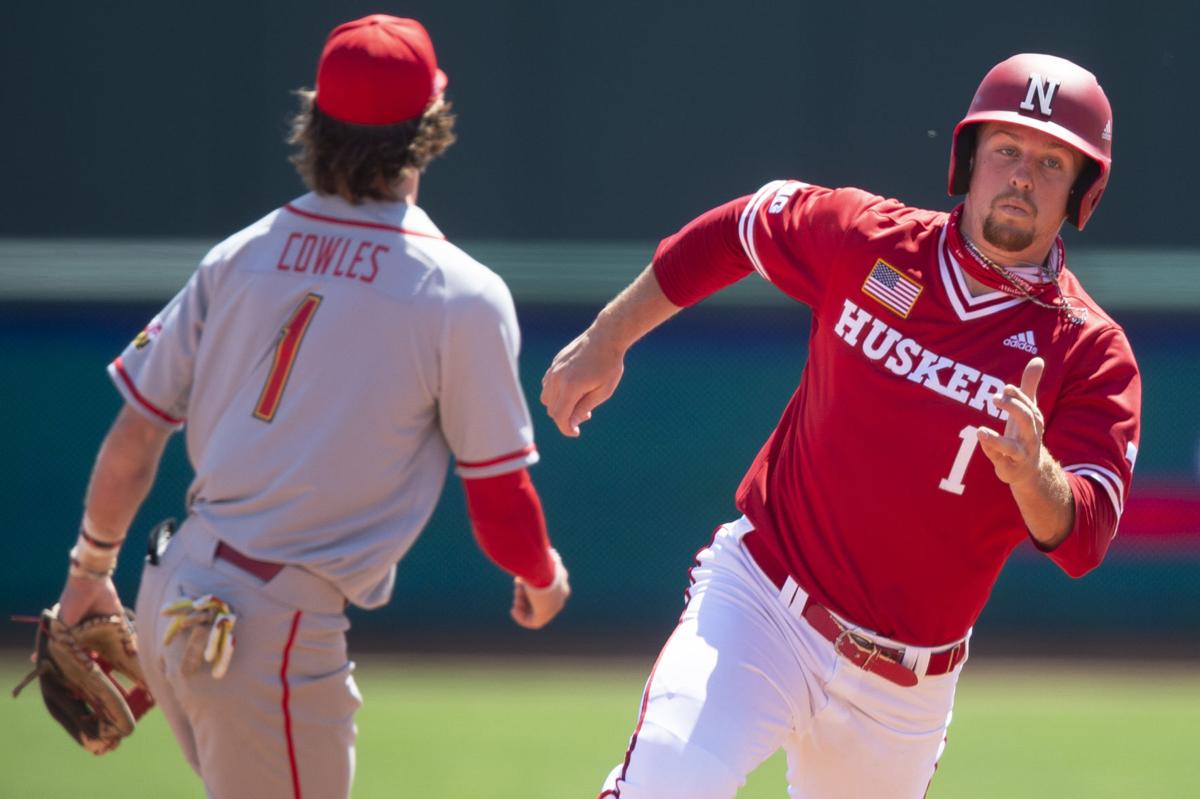 Maryland's Benjamin Cowles (left) is passed by Nebraska baserunner Spencer Schwellenbach as he rounds second base in the sixth inning Sunday at Haymarket Park.

Some 14-3 wins have a little more juice than others.

After its starting pitcher dominated, its head coach was ejected and one of its stud freshmen sent a rocket of a grand slam out of the park in a seven-run eighth inning, the Nebraska baseball team will head into another week as the top squad in the Big Ten after stomping Maryland to win the three-game series at Haymarket Park.

The 3,188 in attendance saw a little bit of everything from the Huskers, who maintained their half-game lead over Michigan heading into next weekend's game.

If only things had been so simple.

NU (15-6) finished with 14 hits, with each starter collecting at least one. Starting pitcher Shay Schanman spun his best outing of the year, allowing three runs on just two hits while striking out a career-high 11 and walking none over six innings against the second-best offense in the league.

But on a Sunday that for a long while was sleepy, there were still fireworks.

Will Bolt and a Nebraska staffer were both ejected in the top of the seventh inning after three consecutive Maryland batters were hit by Schanaman pitches. Schanaman himself was animated with home plate umpire Glen Nelson.

The Huskers appeared to be arguing that the Terrapins were leaning out over the plate, attempting to get hit. Four Maryland batters were plunked Sunday, and seven were hit over the three-game series.

Bolt, after arguing unsuccessfully, chucked his clipboard into the Nebraska dugout and was tossed. It was the first ejection of a Nebraska coach since Darin Erstad was thrown out in a 2014 game against Kansas State.

"Just saw something that I thought we needed to have our guys' back for," Bolt said. "That's all I'll say."

The sequence ended Schanaman's day, as the right-hander gave up fewer hits than batters he hit. Jake Bunz came on to limit the damage, and then the Huskers got loud with their bats to break the game open in a seven-run eighth inning.

And while NU didn't need the runs — the Huskers scored more than enough in a five-run second inning to quickly shake off the disappointment of blowing a four-run lead in Saturdays' loss — there surely had to be some catharsis for Nebraska in burying its opponent to close things out.

"There's never really a question in my mind whether this team (will show) up every day. That's ultimately what you want to have with a team, because when you get in those so-called big moments to go win a series, you're not doing anything different than you always do," Bolt said.

"And that is the sign of a very good team because you don't get your emotions too high or too low. You're just constantly there all the time."

Joe Acker finished off a monster weekend at the plate by going 3-for-5 with two RBIs and scoring twice. Acker finished 7-for-14 over the three games, has reached base in 13 straight games and has scored in 12 consecutive outings.

Jaxon Hallmark, Cam Chick, and Matthews each finished with two hits Sunday for NU. Bunz and Caleb Feekin combined to cover the last three innings on the mound, striking out five, walking one and holding the Terps hitless in those frames.

"It’s a big Sunday win; it gives us momentum going into the week. Just having the guys putting up that many runs, it’s easy for a pitcher," Schanaman said. "We’re going to move on from here and not hang on it too long. We’ll celebrate it now, then get back to work tomorrow for sure." 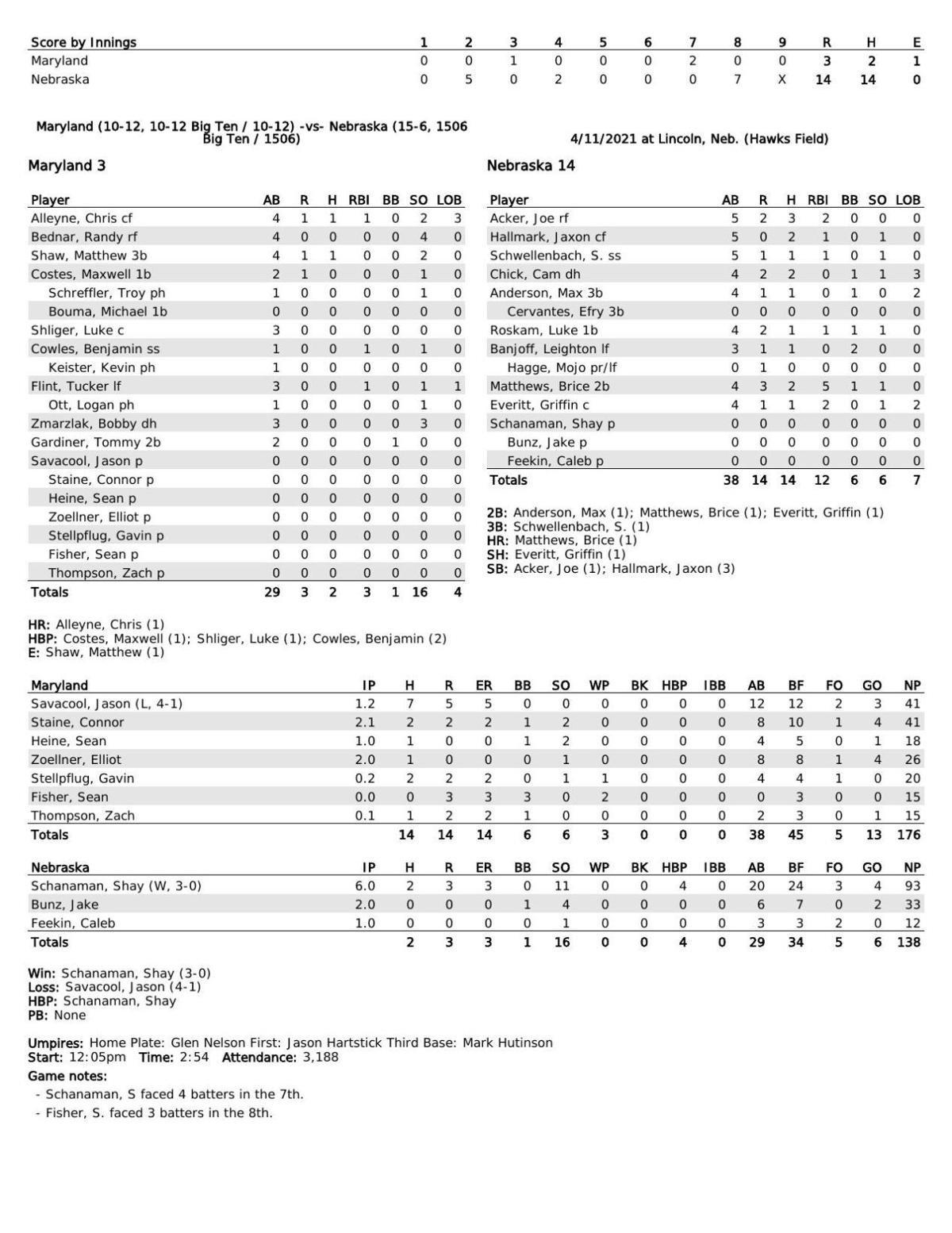 Photos: Huskers close out Maryland series with a 'W'

"We tell our guys that fortune favors the bold, and we want our guys to compete that way."

Versatility has been a prominent theme for the Huskers this season. Perhaps the most prominent example is a fifth-year senior.

The Nebraska bench celebrates as relief pitcher Jake Bunz strikes out a Maryland player following the ejection of head coach Will Bolt in the seventh inning Sunday at Haymarket Park.

Nebraska head coach Will Bolt is ejected from Sunday's game against Maryland at Haymarket Park.

Maryland's Benjamin Cowles (left) is passed by Nebraska baserunner Spencer Schwellenbach as he rounds second base in the sixth inning Sunday at Haymarket Park.