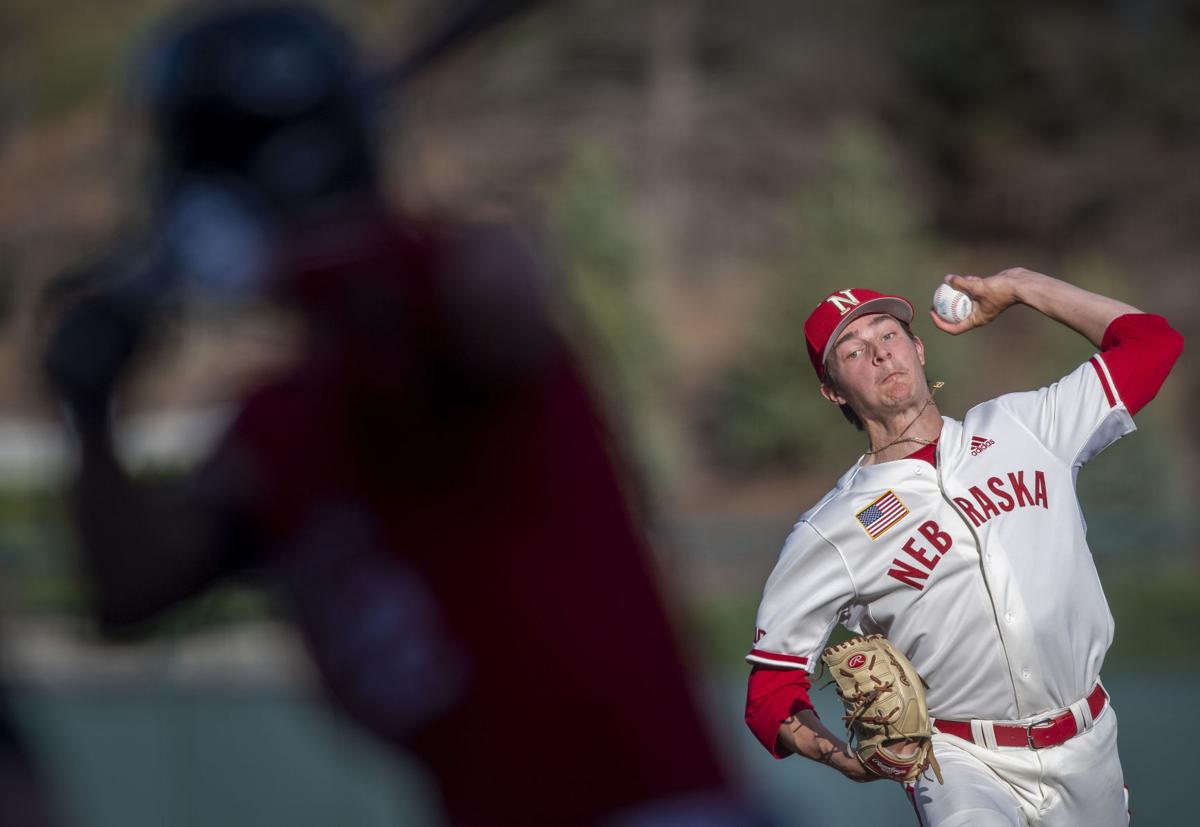 Nebraska’s Cade Povich (33) delivers to the plate against Rutgers in the first inning April 30 at Haymarket Park. 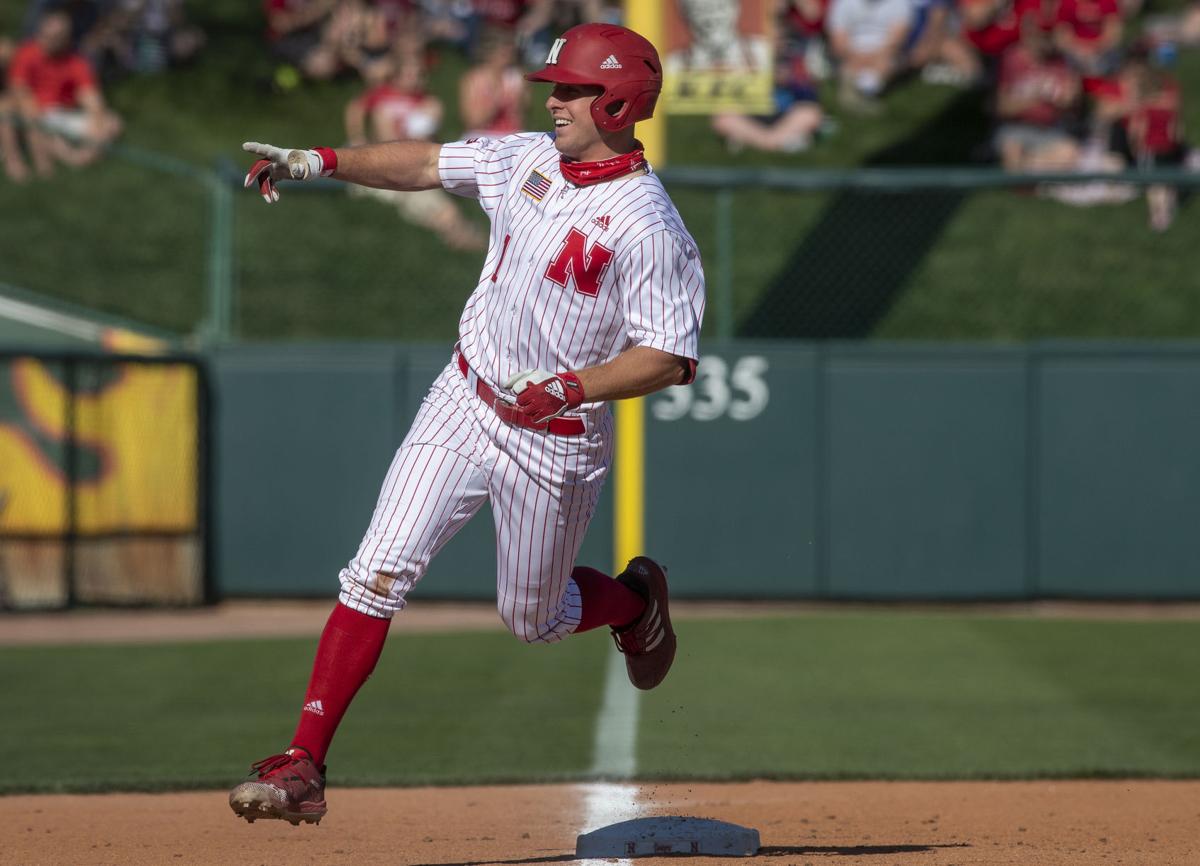 Nebraska’s Spencer Schwellenbach points to the Husker dugout as he rounds third base after connecting for a two-run homer against Rutgers on May 1 at Haymarket Park.

Coming out of high school in 2018, Spencer Schwellenbach thought there was a chance he could be taken in the fifth round of that year's Major League Baseball Draft.

That would have meant going to directly to the pros and collecting paychecks, getting paid to play the game he loved, and fulfilling a lifelong dream.

Instead, as they often do, circumstances changed. Schwellenbach wasn't picked until the 34th round. And he had all the motivation he needed.

"It's all about betting on myself. And that's kind of what I was doing, what Coach (Darin) Erstad had planted in my mind when I didn't get drafted where I thought I would out of high school," Schwellenbach said. "He helped me, my freshman year, to get to where I wanted to be, along with Coach (Mike) Kirby and Coach (Ted) Silva. They just pushed me to be a really good teammate, a really good player."

That bet paid off when the Nebraska shortstop and pitcher was taken by the Atlanta Braves on Monday in the second round of the Major League Baseball Draft.

Schwellenbach was the No. 59 overall pick. There had been whispers that the Braves could potentially take Schwellenbach in the first round, but the club instead picked him with the 23rd selection of the second round. The slot value of the pick is $1.19 million.

“The kid puts the type of year together that he did, the interest that he's getting from the professional teams, he's got a shot to make some money in draft and money that's going to allow him to be a top prospect and go through the minor leagues pretty quickly,” NU coach Will Bolt said earlier this summer.

Bolt turned out to be right.

Ranked by MLB.com as the No. 54 overall prospect, Schwellenbach had been projected by some to sneak into the first round. That didn't happen, but Schwellenbach became NU's highest draft pick since Ryan Boldt was picked 53rd overall in 2016.

Schwellenbach was chosen as a pitcher. That's where he said he expects his future to be at the next level, but Atlanta also likes him as a shortstop.

Those conversations will happen soon enough, and perhaps Schwellenbach will get the chance to do both. But for now, it looks like his future is on the mound.

"I think the decision for me to pitch this year was very big for me," said Schwellenbach, who was celebrating with family and friends in his home state of Michigan. "I never really thought I would pitch ever again, because I had kind of stapled myself at shortstop and didn't really ever throw any bullpens."

The Saginaw, Michigan, native started every game at shortstop and hit No. 3 in the lineup for NU in 2021, ranking in the top 10 in the Big Ten in runs, RBIs and walks.

He added pitching duties for the first time since high school, and emerged as one of the nation’s top closers. He had a Big Ten-leading 10 saves, struck out 34 over 31 2/3 innings and carried a 0.57 earned-run average.

“He (didn’t) even throw bullpens during our season because he's trying to save his arm, so that's all just natural ability,” Bolt said. “But I think his ceiling is he's top three rotation-type in the big leagues. I think he's a starting pitcher.”

Schwellenbach perhaps solidified those starting thoughts with his final pitching appearance as a Husker, holding top-ranked Arkansas to one hit in 4.2 innings of relief at the Fayetteville Regional.

"The decision, I thought, really paid off," Schwellenbach said. "and I'm really excited to start working on pitching full time if that's how they see me."

Povich taken in third round

Cade Povich waited quietly for his phone to ring. Then the Minnesota Twins called.

"It wasn't very quiet after that," Povich said.

Povich was taken one spot ahead of Arkansas star pitcher Kevin Kopps.

"It was kind of sitting around and waiting for something to happen, then out of the blue I got the phone call saying I was going to get picked next," Povich said. "And everything from then on has just kind of been blank with happiness and excitement."

The slot value of Povich's pick is $593,100. With two seasons of college eligibility remaining, he could choose pro ball, or to return to Lincoln.

"I'm sure there will be a little bit of talk to kind of figure that out," Povich said. "But as of right now I'm just going to enjoy it with my family."

Povich was a first-team all-Big Ten selection after going 6-1 with a 3.11 ERA and 88 strikeouts in 81 innings pitched.

His selection Monday marks the latest in a quick rise for the Bellevue West graduate, who spent one season at South Mountain Community College in Arizona before transferring to Lincoln as Will Bolt's first recruit two weeks after the coach was hired.

No other Huskers or Husker commits were picked Monday, meaning coveted high school signees Drew Christo and Chase Mason are one step closer to coming to Lincoln.

Christo and Mason were both considered top 250 prospects by MLB.com, and both have private financial numbers teams would have to meet to draft them. With 10 rounds and more than 300 picks in the books as of Monday afternoon, the chances of both high-level prospects starting their careers at Haymarket Park seemed to increase.

After the 20-round draft wraps up, players will be able to sign with teams as undrafted free agents.

The first round of the Major League Baseball Draft came and went Sunday night without Nebraska’s Spencer Schwellenbach hearing his name called.

Nebraska's Max Anderson was named a second-team All-American by D1 Baseball on Monday. He was the only freshman from the Big Ten selected by D…

The Detroit Tigers selected Austin Schultz, a 2018 Norris graduate who played college baseball at Kentucky, with the 285th pick of the 2021 MLB Draft.

Moments before the MLB Draft resumed with Round 11, the Journal Star boys athlete of the year revealed he is going to school next year.

Shortly after being picked in the 20th round of the MLB Draft, the right-handed fireballer told the Journal Star he intends to sign a pro contract.

Many draft experts expect Schwellenbach to start his pro career as a pitcher, although the Braves have not made clear their plans.

Nebraska’s Cade Povich (33) delivers to the plate against Rutgers in the first inning April 30 at Haymarket Park.

Nebraska’s Spencer Schwellenbach points to the Husker dugout as he rounds third base after connecting for a two-run homer against Rutgers on May 1 at Haymarket Park.