The bats were quiet early, Shay Schanaman didn't have his best stuff and the Huskers were down five.

But as Nebraska and Illinois showed over 27 innings this weekend, don't throw in the towel in Champaign.

The Husker baseball team (13-5) scored seven runs in the top of the sixth inning to storm back for a 12-7 series-clinching victory against the Illini on Sunday at Illinois Field. Another wild game in the series included an inside-the-park-homer and a Husker stealing home.

"Our lineup was relentless from about the fourth inning on, and it was good to see some good pitching performances and we played clean defense, which has been something we needed to get back to," NU coach Will Bolt said on his postgame radio show.

Two-run homers by Spencer Schwellenbach and Joe Acker bookended the sixth-inning surge, with Acker's blast to left field giving Nebraska a 9-6 lead. Sandwiched between was a bases-clearing double from Brice Matthews, the Huskers' No. 9 hitter.

Matthews and the Huskers were not done.

The freshman, taking advantage of a lax throw from Illinois' catcher back to the pitcher, stole home in the top of the eighth, and Spencer Schwellenbach followed with an RBI double a pitch later. Cam Chick, who had three hits, extended the lead to 12-7 on an RBI hit that slipped through the left side of the infield.

"And Brice Matthews, what can you say?"

Illinois plated three runs in the third inning to take a 5-0 lead, which led to an early exit for Schanaman, who gave up five runs on four hits over 2 2/3 innings.

Jaxon Hallmark, who had three hits, got the Huskers on the board in the fourth with a solo shot that just cleared the fence in left field. Chick, two batters later, nearly hit one over the fence in center field, but was able to motor around the bases for an inside-the-park homer to cut the Illini lead to 5-2.

Junior college transfer Koty Frank gave up a solo home run to Jackson Raper in the fifth, but otherwise was very effective in keeping Nebraska in the game. He tossed 3 2/3 innings after coming in relief of Schanaman and struck out three in earning the win.

"I thought Koty even got better as it went along," Bolt said. "I thought his stuff actually got better as he went along. The attack was good, the compete was good, he wasn't worried about anything else other than trying to move on to the next pitch, and that's what we saw from him today."

Schwellenbach moved to the mound to record the final six outs.

Sunday's Husker victory capped a wild series. Friday's series opener, won by NU, went back and forth. Despite taking an early 4-0 lead Saturday, Illinois had to rally for a 10-8 win to tie the series.

"It was another crazy game here," Bolt said. "This ballpark plays awfully offensively so you never know what you're going to get. There's a lot of different stuff that it can present for you." 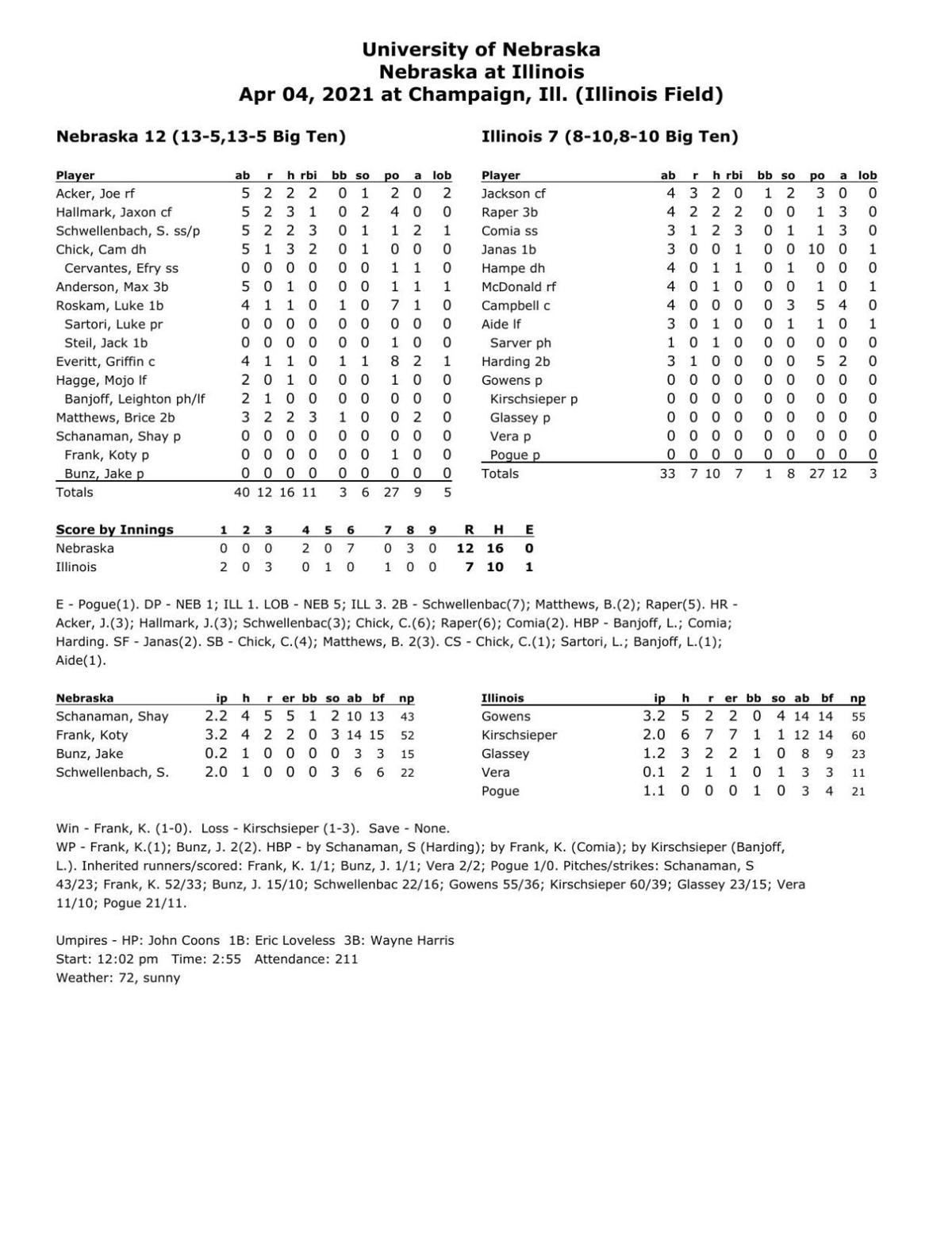 Schanaman gets into 'compete mode,' shuts down Minnesota as Huskers finish off four-game sweep

Against Minnesota on the prettiest Sunday of the year, Schanaman showed why the Husker coaches are confident in him.

"We tell our guys that fortune favors the bold, and we want our guys to compete that way."

NCAA sports directors said schools are invited to bid to be among 16 regional hosts in each sport.

Max Anderson homered in his first college at-bat, and the Husker has kept going from there. Here's a closer look at how he's getting it done.