The Nebraska volleyball team reached the national final, and the men's gymnastics squad finished third in the nation.

Those were two high points for Nebraska in 2018-19, but as an athletic department, NU had its worst showing in the Learfield Directors' Cup standings since they were put in place in 1993.

Nebraska finished in 48th place among Division I schools.

The final standings were released Friday, two days after the completion of the final sport, college baseball.

The Huskers finished in 12th place among the 14 Big Ten schools. Only Purdue (55th) and Rutgers (82nd) were lower.

Stanford finished in first place, Michigan was second and Florida was third. Texas and USC rounded out the top five, respectively. Stanford has finished first every year since 1994-95.

Nebraska had three top-10 finishes in the Learfield (once called the Sears' Cup) in the 1990s.

A top three-finish by the NU men's gymnastics team and a 10th-place showing at nationals by the wrestling team gave the Huskers a boost.

Nebraska, however, did not play in a bowl game in football, and the soccer, women's basketball and softball programs failed to reach NCAA tournaments.

The Huskers' lowest finish in the Learfield Directors' Cup standings coincides with several coaching changes in the athletic department. 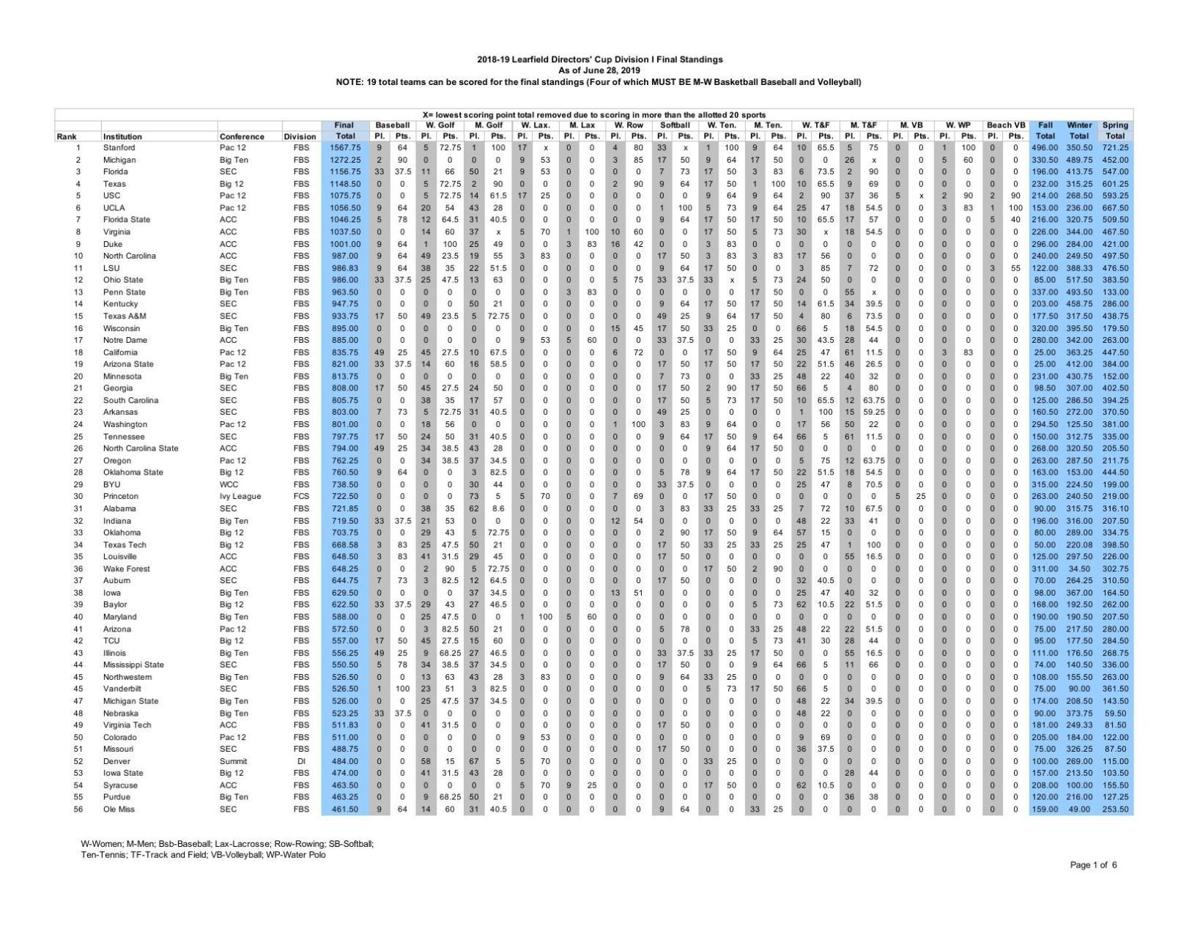 Nebraska announced a change to its Aug. 1 Fan Day setup, admitting a "mistake" in its original plan.

Driving for 6: NCAA tweaking waiver guidelines and who might be next for Huskers' 2020 class

We’re going to need the AC at full blast by the time this drive is over.

Nebraska’s offensive line group entering 2019 has, at least on the top line of the depth chart, more answers than questions as preseason camp …

Husker LB target Reed commits to Wisconsin; a look at other LBs in play

It’s never likely a school is going to land every single official visitor when it hosts seven like Nebraska did this past weekend.

Cade Povich, after meeting Will Bolt and his staff, went out to lunch with his parents Friday to discuss a scholarship offer to play baseball …

Highly regarded prognosticator Phil Steele expects Nebraska to be the most improved college football team in the nation in 2019.

Iowa has bludgeoned Nebraska a few times in recent years, but not as strikingly as Wisconsin has since 2011 (think Melvin Gordon in 2014 and 70-31 in 2012). My read is Nebraska fans have more respect for Wisconsin. Husker fans still regard the Hawkeyes as "little brother," as if it were still the 1980s and '90s. Yes, despite Iowa's four-game winning streak against NU.

Meet the Huskers has a new name and a new feel.

With the 2019 Women’s World Cup entertaining and inspiring the nation, the Nebraska women’s soccer team decided to get some worldly experience…

Will Bolt has only been in charge of the Nebraska baseball program for a few weeks, but on Wednesday, he and his staff landed their third comm…

Longtime Nebraska softball coach Rhonda Revelle has been placed on administrative leave, pending the completion of an undisclosed review, a sp…

A pair of familiar faces are returning to the Nebraska wrestling program in coaching roles.

Veterans and newcomers alike joined in the fun in the Nebraska women’s soccer exhibition match against Omaha on Saturday night.