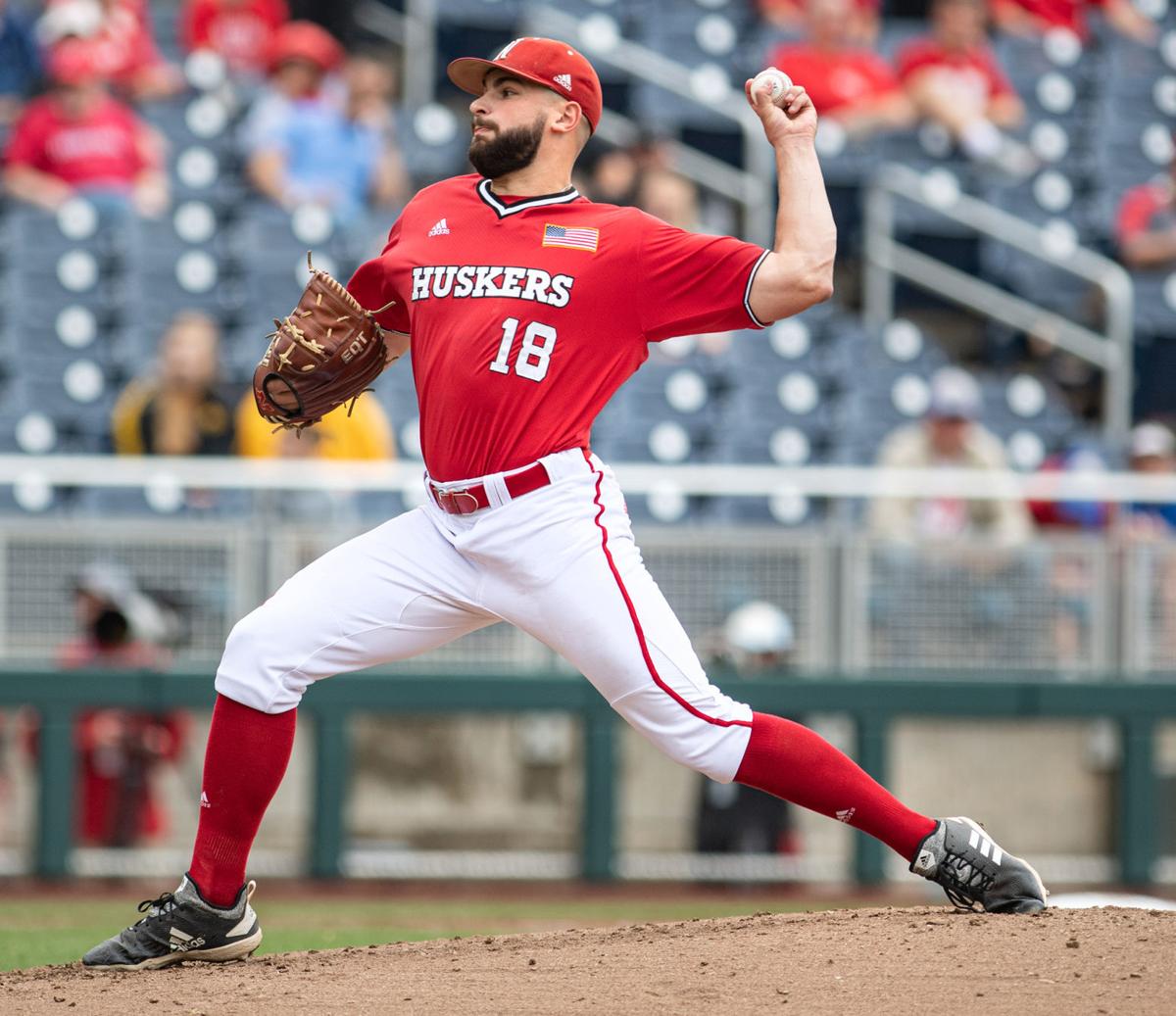 Nebraska starter Nate Fisher pitches against Iowa during the Big Ten Tournament on Friday at TD Ameritrade Park in Omaha. 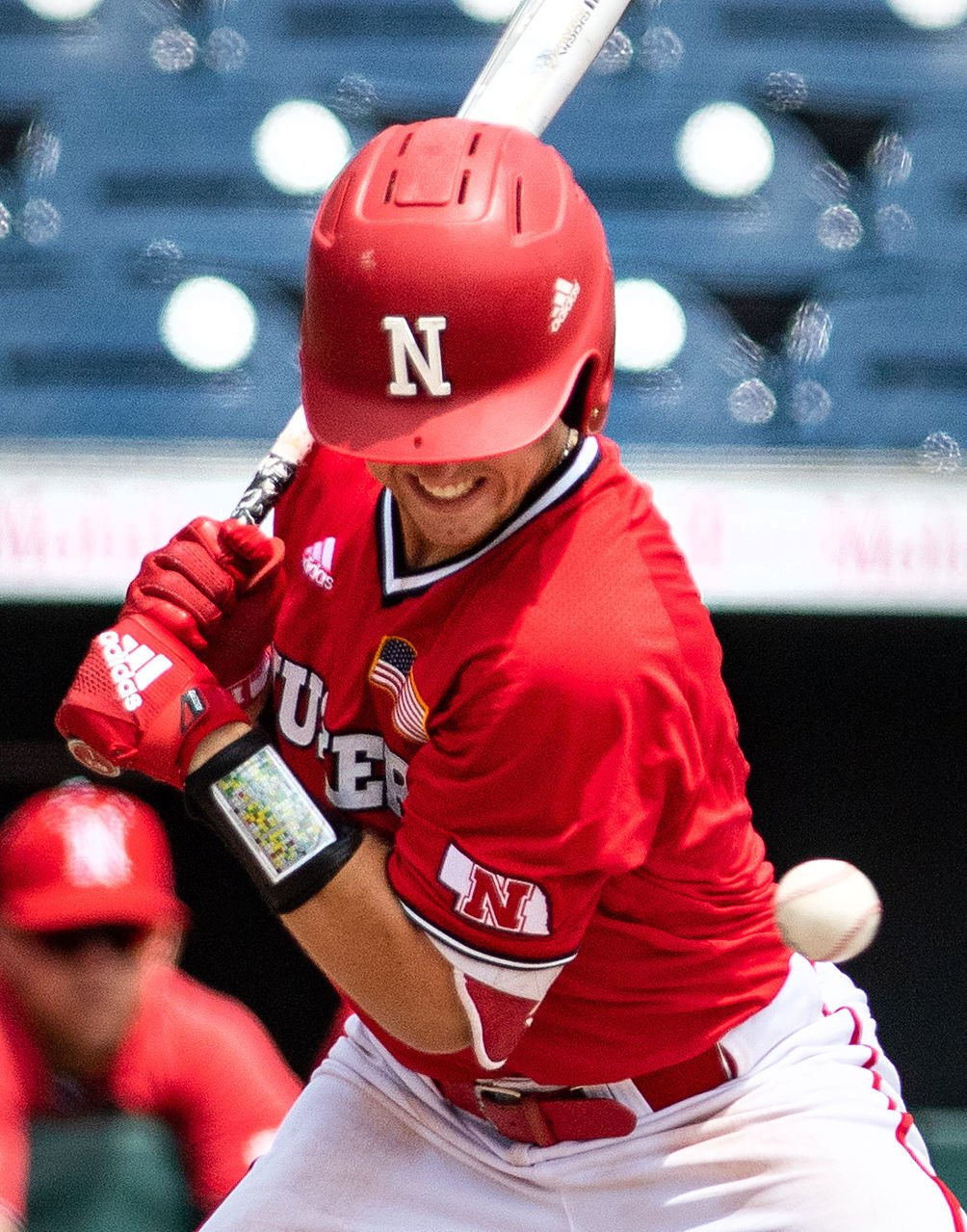 Nebraska's Spencer Schwellenbach (1) is hit by a pitch against Iowa on Friday during the Big Ten Tournament at TD Ameritrade Park in Omaha.

The senior also made some key adjustments from the first time he faced Iowa, when the Hawkeyes scored seven runs in 4 2/3 innings against him.

"I went back and watched some film and just learned from some mistakes and how I could attack hitters maybe differently," Fisher said after he limited Iowa to four hits in seven innings on Friday at TD Ameritrade Park.

Fisher's performance helped lift Nebraska to an 11-1 win in eight innings, pushing NU to 2-0 in the Big Ten Tournament.

Early on, it looked like Fisher wouldn't go seven innings. He threw 30 pitches alone in the second inning, but he limited the damage to one run in the frame.

"We kind of left him off the hook, let him settle in and he ended up with a long start and we fell behind," Iowa coach Rick Heller said. "He really just threw a lot of fastballs, a lot more than what we expected."

Fisher, who matched a career high with seven strikeouts, had his most efficient inning in the seventh, retiring the Hawkeyes in order on seven pitches.

"When you face a team and they get the better of you, it can go one of two ways," Erstad said of the April 20 game in Iowa City (won by Iowa 15-9). "Nate just went on attack mode. He's nearing the end of his career and he's not going down without a fight."

Rested bullpen: Fisher and Matt Waldron (Wednesday's starter against Minnesota) pitched deep into their respective starts, which sets up Nebraska's pitch staff very well for the remainder of the tournament.

Nebraska will turn to senior Reece Eddins for Saturday's 9 a.m. game against Michigan.

"I'm not going to try to reinvent the wheel," Erstad said of the chance he might hold Eddins. "This is probably, right now, the best place you can be. We're going to get some extra rest and be ready to play early tomorrow."

He stayed in against the Gophers, and on Friday, made his impact at the plate against the Hawkeyes.

Henwood reached base in each of his five plate appearances, recording three hits and two walks.

Henwood is playing his best baseball at the right time. He's 12-for-25 in his past 12 games.

Hagge's lineup move pays off: Mojo Hagge was atop the Huskers' lineup again Friday, marking the seventh time in eight games that the junior outfielder has led off for NU.

Hagge led off the game with single to left and finished 3-for-4 with two walks and two runs scored.

Spencer Schwellenbach was Nebraska's leadoff hitter for the majority of the season, but Erstad felt the team wasn't taking advantage of his production — and Schwellenbach encountered a slump — and moved him down the lineup.

"We moved (Hagge) around a little bit, and I think that's where he's most comfortable," Erstad said. "(We) go by where people might be more comfortable and maybe take some pressure off the younger guy and move him down the lineup, and put some more experience in that spot, and Mojo's really responded and done a nice job."

NCAA Tournament watch: No matter what happens over the next day or two, Nebraska has assured itself of a spot in the NCAA Tournament.

D1Baseball.com listed the Huskers as a No. 2 seed Friday, and that was before the Huskers drubbed Iowa.

A win away from Sunday's final, Huskers show no mercy in thumping Iowa in eight innings

Sparked by a pair of four-run innings, the Huskers rolled to a 11-1, eight-inning mercy-rule win against Iowa on Friday to remain unbeaten, and extending their stay at TD Ameritrade Park Omaha to at least Saturday evening.

'Common sense' prevails with postponement of Nebraska-Iowa in the Big Ten tourney; teams will play Friday

OMAHA — Nebraska and Iowa were going to play late into the night.

OMAHA — You won't be surprised to hear that Darin Erstad isn't much of a crier on the baseball field.

Big Ten baseball: Led by Iowa, upsets abound in first round of tourney

Michigan post a seven spot in the first inning en route to a thumping of the Huskers in the Big Ten Tournament at TD Ameritrade Park. The bright side for Darin Erstad's team: It gets another shot.

Eighth-year Nebraska head coach Darin Erstad has a bunch of grinders -- a team that clearly has taken on his personality. It keeps coming no matter the circumstances, as it showed Saturday while advancing to the Big Ten Tournament championship game.

OMAHA -- Pitching on short rest, Griffan Smith and Andrew Magno didn’t have much left in the tank.

"This team isn't going anywhere," said Nebraska junior outfielder Joe Acker, who had two hits Sunday. "We're going to get back to Lincoln and rest up. We're going to hopefully find out where we're going to go for a regional, and we're going to go win a regional. Right now, it's hard not to think of today's game. But after I get off that bus, I'm going to be focused on what's next for this team."

OMAHA -- A depleted pitching staff is usually an unfortunate side effect of making a conference tournament championship, and the Nebraska staf…

Nebraska starter Nate Fisher pitches against Iowa during the Big Ten Tournament on Friday at TD Ameritrade Park in Omaha.

Nebraska's Spencer Schwellenbach (1) is hit by a pitch against Iowa on Friday during the Big Ten Tournament at TD Ameritrade Park in Omaha.