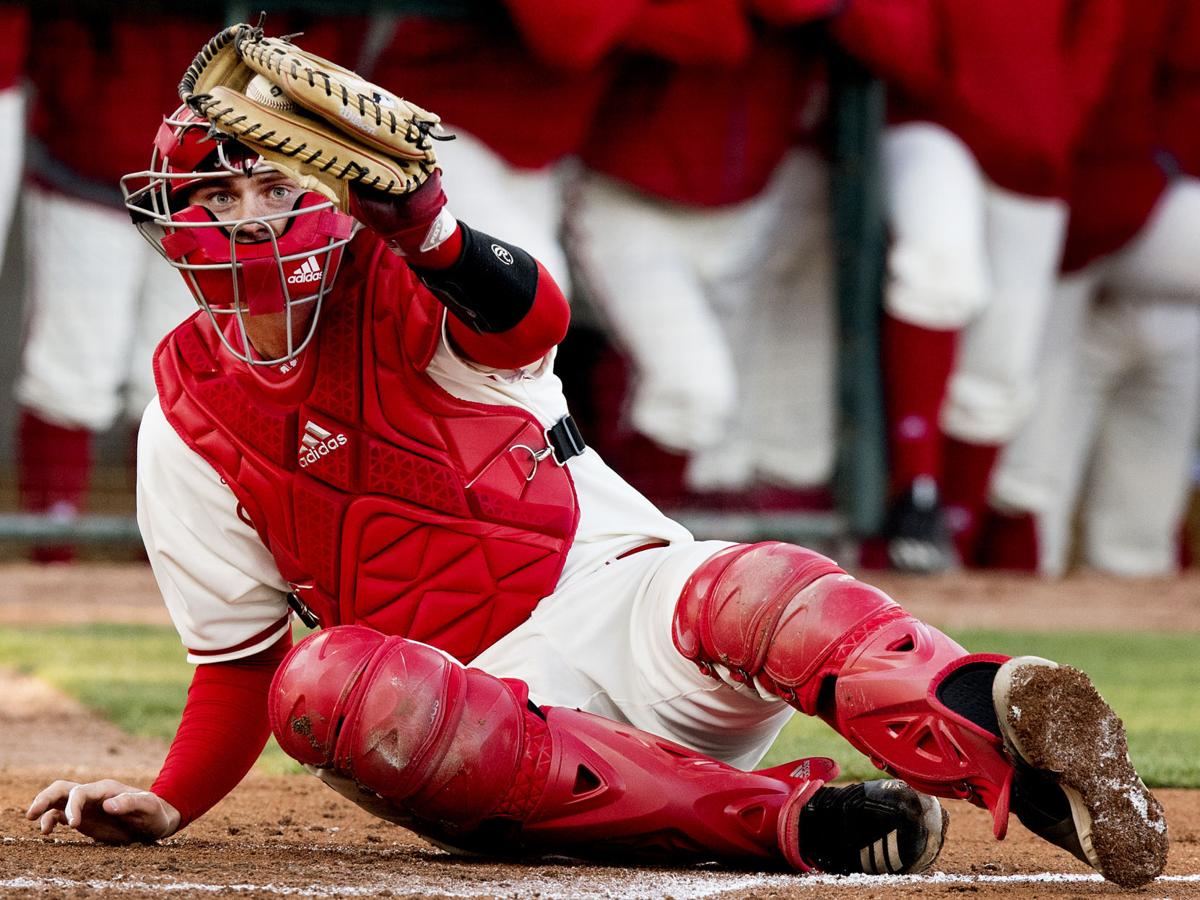 Nebraska catcher Gunner Hellstrom shows the ball to home plate umpire Jason Harstick (not shown) after tagging out a Kansas State baserunner during a 2018 contest at Haymarket Park. 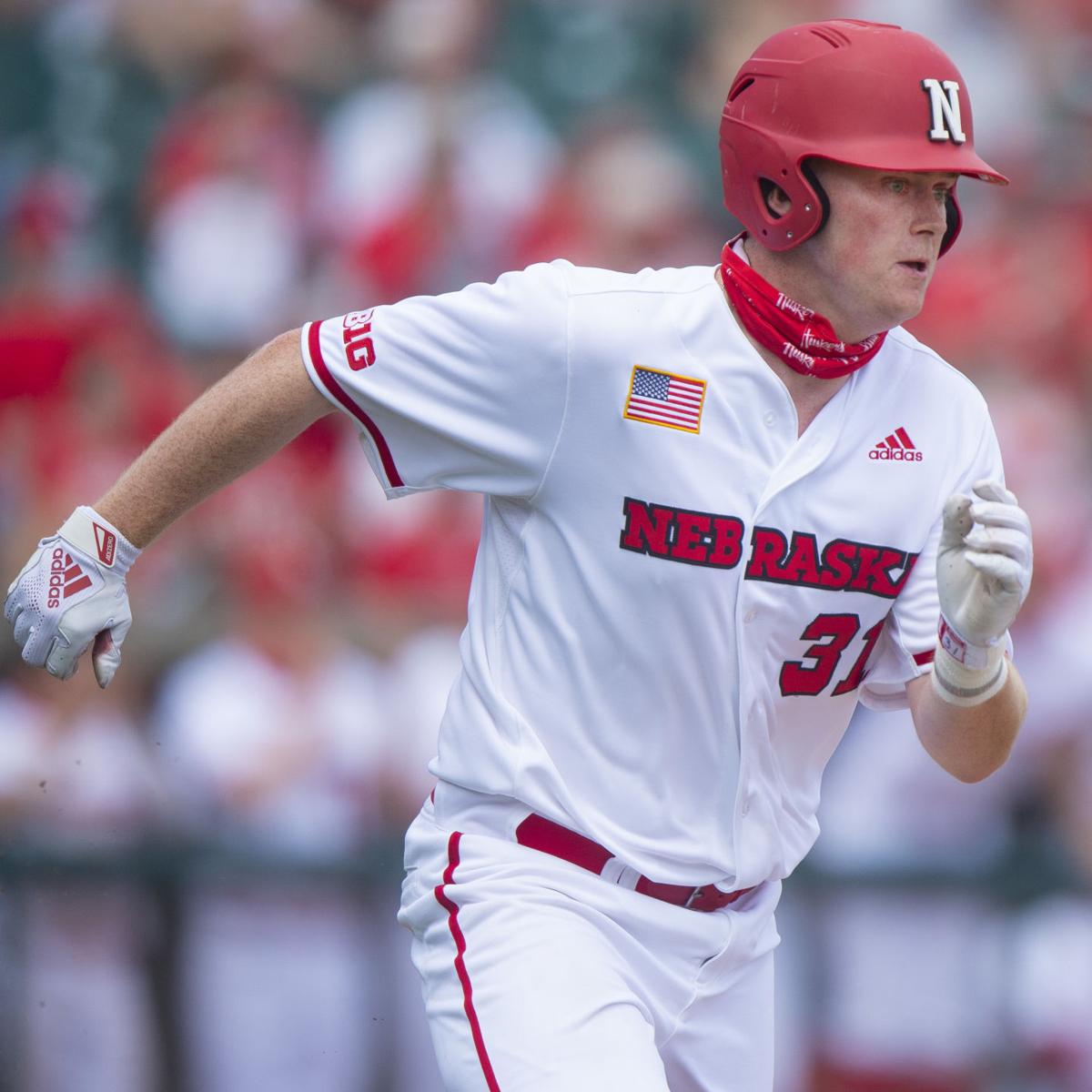 Gunner Hellstrom has embraced his new role with the Nebraska baseball team.

In every aspect of his program, Nebraska baseball coach Will Bolt preaches selflessness.

On the field, in the dugout, in practice, the Huskers are expected to play for each other and sacrifice for the team as a baseline requirement.

It's worked to the tune of a 23-11 record this season. And if any of the Huskers needed more proof, they need only to look to Gunner Hellstrom.

The senior catcher has gone from being on the Big Ten's all-freshman team in 2018 to seeing action in just seven games so far in 2021.

"It was definitely one of the most exciting moments of my career," Hellstrom said. "I was thankful for my name to get called, but I think we that we had the utmost confidence in anyone who gets their name called in that situation to be able to get it done."

It's that kind of approach that has made Hellstrom a respected member of Nebraska's clubhouse and a rock-solid veteran presence for a team breaking in more than a dozen new players this season and now contending for a league title with just a few weeks to play.

"What he brings to the team, he's gone from being a guy that's played, caught a ton, to maybe being a part-time player, to a guy that wasn't playing at all for most of the season, and he's stayed ready," NU coach Will Bolt said. "Just really gratifying for him, I know, to get in there and get the job done.

"And everybody does have a lot of confidence in him just because he does work so hard, he's so invested in the team, such a great kid."

Hellstrom hit .310 during his freshman season while starting 19 games, including a five-hit day at Rutgers that remains the last time a Husker has accomplished that feat.

There were 29 starts as a sophomore in 2019, when Hellstrom hit .289 for Nebraska's regional qualifier. He started six more games in last year's pandemic-shortened season.

This year, he went more than a month between appearances.

That decline might be hard for a lot of players to swallow. Hellstrom instead made sure he would be ready whenever his name was called.

"I keep my preparation the same throughout the week. I keep my legs going good just in case I need to go in there behind the plate. I get my swings in, in the Gordon (complex)," Hellstrom said. "I prepare like I'm going to play, so when my name is called, I'll be ready to go."

Hellstrom has also embraced a role as one of Nebraska's leaders. With no midweek games, he's helping get NU's pitchers prepared for the weekend. He's there to shepherd NU's younger guys through the grind of the season.

"I do have a different role this year on the team, and I'm trying my best to buy into it," Hellstrom said. "I like getting the pitchers ready during the week … I enjoy helping the younger guys get acclimated into the game. Just letting them know that their skills play, that they're here for a reason."

Over the past two weeks, Hellstrom's willingness to take on that new role has led to more opportunities at the plate. While Luke Roskam and Griffin Everitt handle the bulk of the work behind the plate, Nebraska knows it has a willing player on the bench who will be ready at the snap of a finger.

The Huskers blew things open with 12 runs over the final four innings to beat Rutgers. They lost to Indiana earlier in the day.

A bit of everything in NU's first game of the weekend: 10 Husker walks, five Indiana errors and an hourlong rain delay.

Nebraska likely saw its chances hurt severely by a home sweep at the hands of Rutgers two weekends ago.

Bolt on Povich: "(He was) just in complete command of the game. I thought his stuff was good, compete was good, attack was good."

Nebraska catcher Gunner Hellstrom shows the ball to home plate umpire Jason Harstick (not shown) after tagging out a Kansas State baserunner during a 2018 contest at Haymarket Park.

Gunner Hellstrom has embraced his new role with the Nebraska baseball team.