Every baseball season has its ebbs and flows; days when the offense is humming, and times when nothing finds the barrel of the bat.

The Nebraska baseball team is going through the latter at the moment. And in a shortened, conference-only season, ebbs and flows like that suddenly become much more pronounced.

Nebraska's offense was quiet for the second consecutive game, and Iowa struck for all its runs in the sixth inning as the Hawkeyes beat NU 3-0 Friday afternoon in Iowa City.

By Sunday, Nebraska and Iowa will have played 5 times in 9 days. Is that an advantage? Disadvantage? Or, is it 'just baseball?'

The Huskers managed just three singles and didn't get a runner past first base after the third inning while losing for the third straight game.

Nebraska has scored one run over its past 20 innings, and five runs over its past three full games while mustering just 13 total hits.

Nebraska (5-4) already is 20% of the way through its 44-game season. There are no midweek or nonconference games to work out the kinks. That Nebraska struggled against a top-end starter in Iowa's Trenton Wallace matters little, Bolt said. NU needs to find a spark, and quickly.

After Husker starting pitcher Cade Povich cruised through the first five innings, Iowa's first three batters of the sixth went homer-double-homer to provide all the offense the Hawkeyes would need. The onslaught started when Iowa No. 9 hitter Brendan Sher hit his second home run of the season.

Jaxon Hallmark, Spencer Schwellenbach and Logan Foster had NU's three hits. Schwellenbach was robbed of an extra-base RBI hit in the fifth inning when Iowa center fielder Ben Norman made a leaping catch and crashed into the outfield wall to end the inning.

That was Nebraska's last serious threat. The Huskers tried to play small ball in the top of the first after Joe Acker led off the game with a walk, but a bunt back to Wallace led to Acker getting thrown out at second, and a strikeout two batters later ended the threat with runners on the corners.

"A guy like that, sometimes you've got to get to him in the first inning," Bolt said. "And that's not going to get the job done against a good, competitive pitcher. We had too much of that today."

Iowa managed just six hits, with only three coming outside of the sixth inning, but NU's offense wasn't able to apply any pressure to Wallace and reliever Trace Hoffman.

"We're just not competitive enough offensively. We've got to get better," Bolt said. "We've got to find the right combination of guys that are willing to do that." 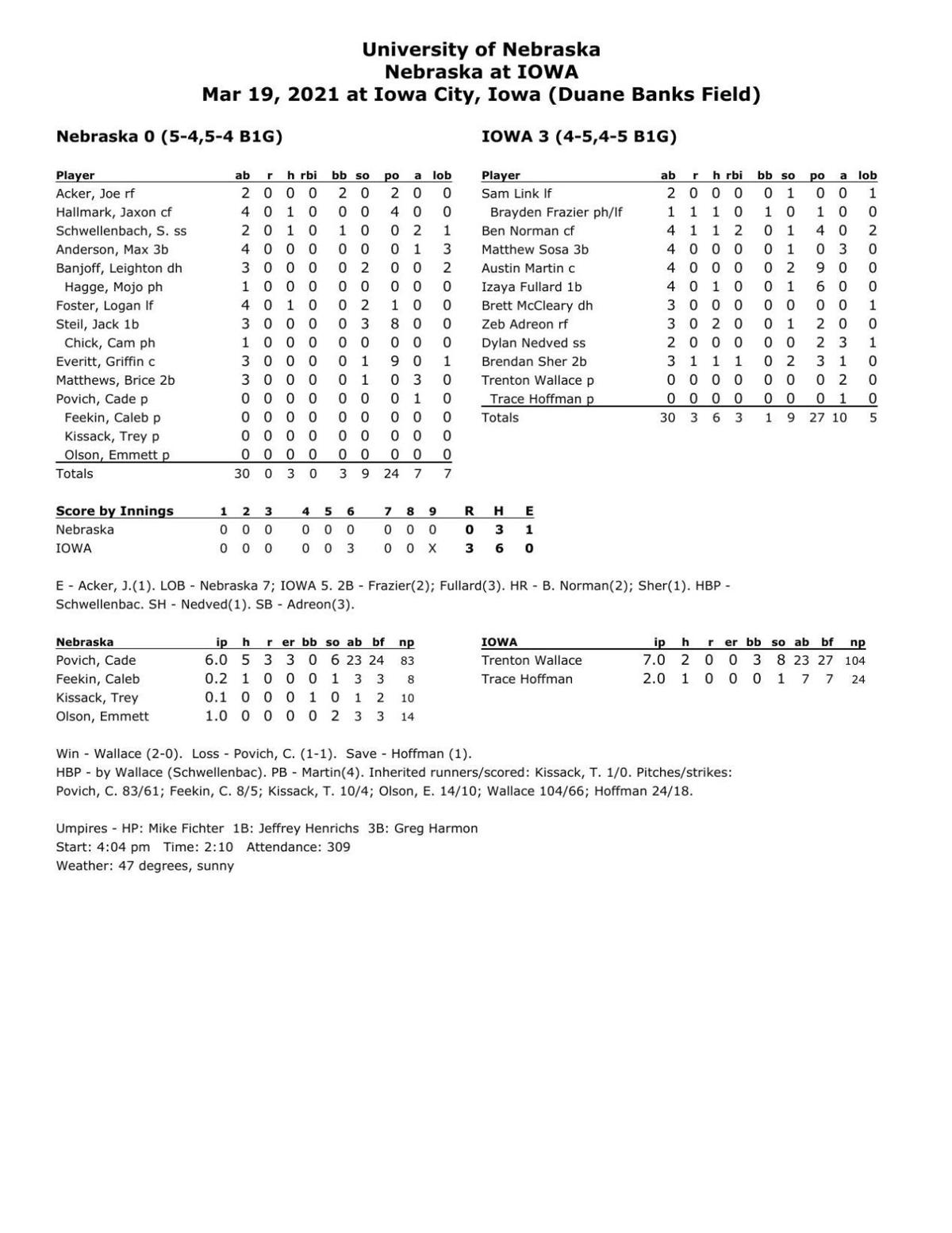 Cade Povich struck out 12 of the 25 batters he faced while allowing three runs on five hits and walking two over just six innings.

It's been a series of "new" experiences for Nebraska this season. This weekend might jolt to the top of the list.

Cam Chick hits two homers — one 'massive,' one 'huge' — as Huskers break out to beat Iowa

Cam Chick's grand slam was "massive." His two-run blast in the sixth? Will Bolt called that one "huge" as Nebraska ends a three-game skid.

The win gave Nebraska (7-4) the series victory after Iowa took Friday's opener, and provided some validation that NU's offense is back on track.

Cam Chick's big weekend at Iowa led to the Husker baseball slugger being named Big Ten player of the week.