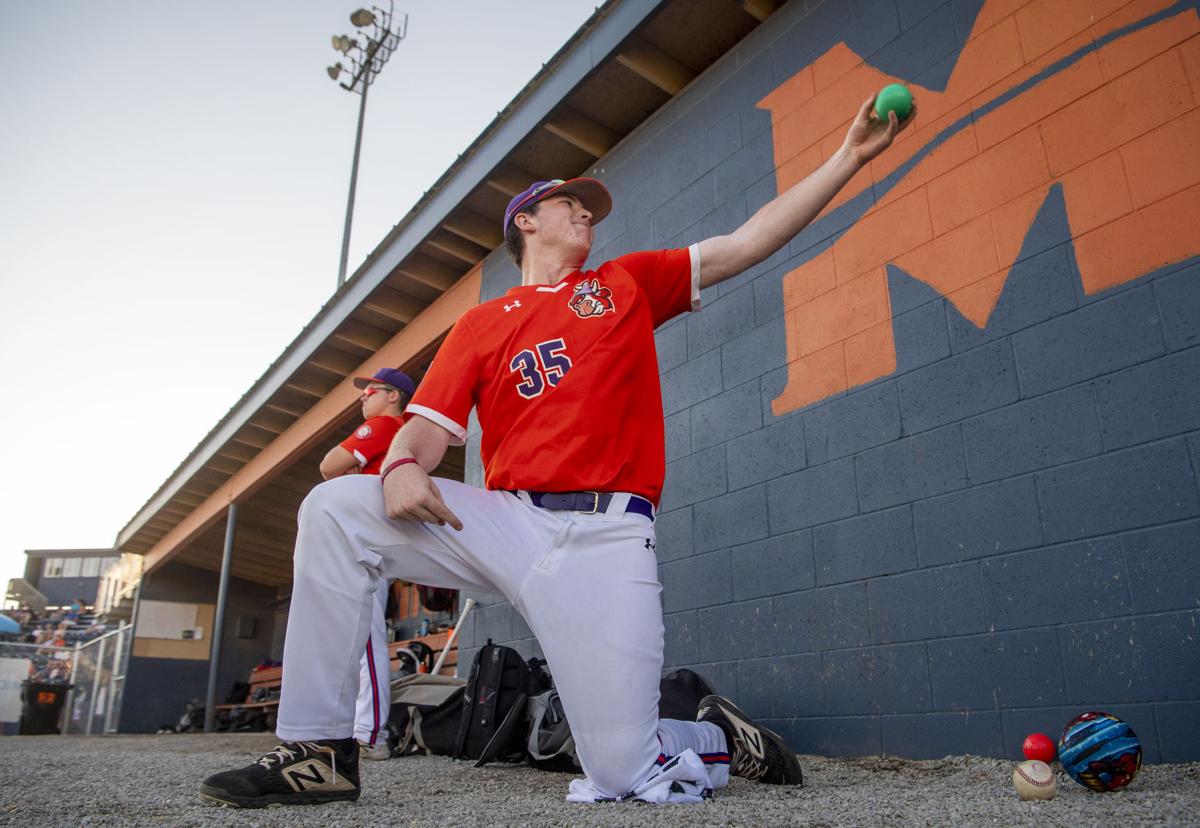 Nebraska pitcher Emmett Olson (35) does recovery exercises in the dugout of the Fremont Moo — where he's playing this summer — on Tuesday during Expedition League action at Moeller Field in Fremont. 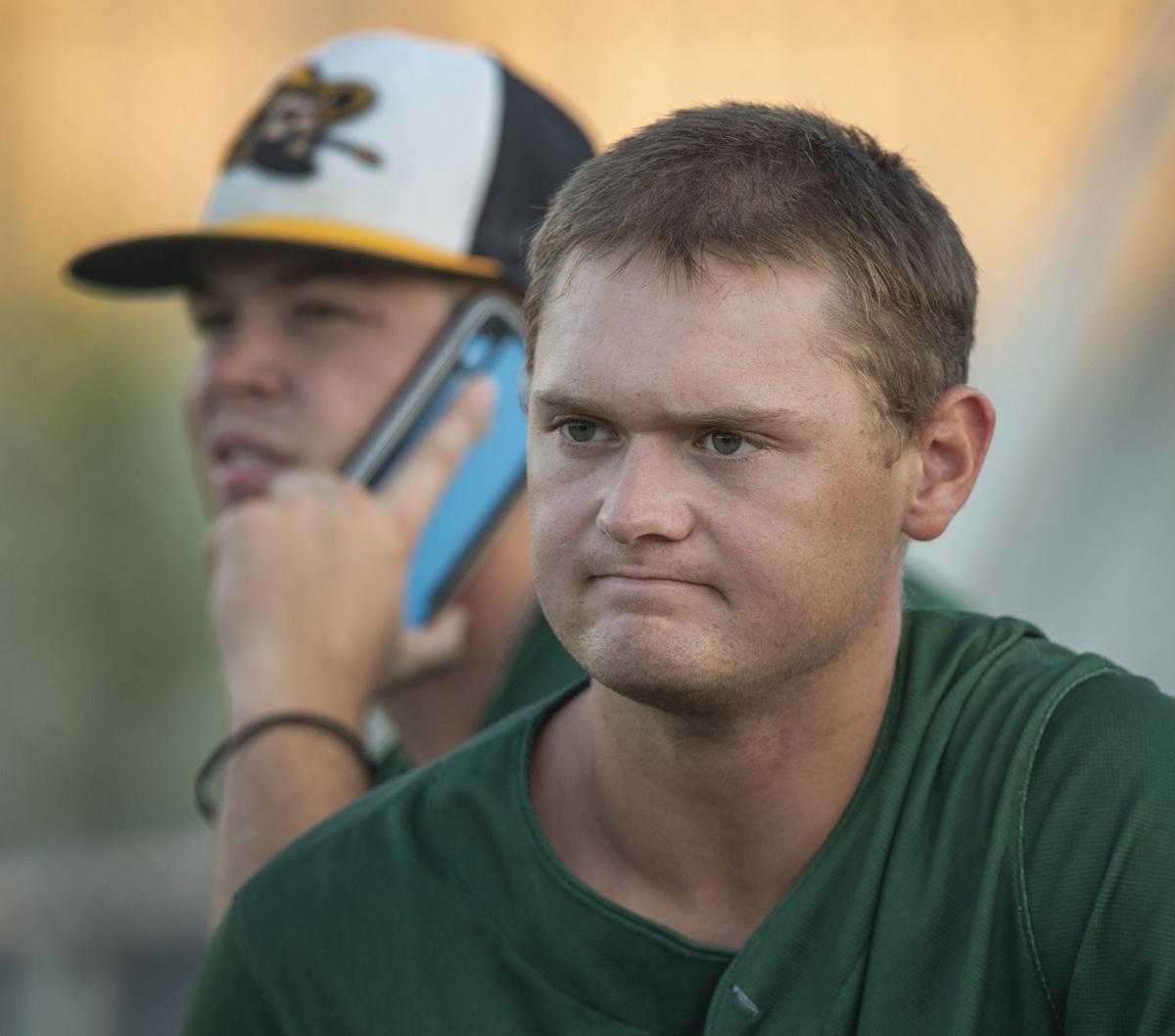 Nebraska pitcher Trey Kissack watches the play on the field from the bullpen of the Hastings Sodbusters, his team for the summer, on Tuesday during Expedition League action at Moeller Field in Fremont.

FREMONT — Trey Kissack was ready for an adventure.

Alaska was calling. Anchorage, to be specific, where Kissack was set to play his summer league baseball before returning to Lincoln for one final season with the Nebraska baseball team.

The Huskers' season was canceled after just 15 games. Summer collegiate leagues across the country — a vital lifeline of development for hundreds of players — started shutting down in response to the COVID-19 pandemic.

Latest signings give glimpse into transformation of Husker baseball

Not only was Alaska out the window. It looked for a while like Kissack and his teammates might not get to play at all. Nebraska's coaches were scrambling to try and find places for their guys to get reps.

"We had our season taken away from us and we all understand why and we're all taking this very seriously," Kissack said. "I think a lot of us back in May were thinking summer ball wasn't going to happen."

But in places such as Hastings and Fremont, there have sprouted oases.

The Expedition League, with teams in Nebraska and South Dakota, has played on, one of a handful of summer leagues giving college players a chance to get back to doing what they love.

More than 20 Huskers are spread among six leagues, from Nebraska to Georgia. They play for the Pit Spitters and the Bananas, the Woodchucks and the Moo.

But the nicknames don't matter much. The playing does.

Kissack is a reliever for the Hastings Sodbusters, who were in Fremont for a four-game series against the hometown Moo beginning Tuesday night. On the same roster is another Husker pitcher, Shay Schanaman, and incoming catcher Griffin Everitt. In the other dugout, NU infielders Luke Boynton and Stacey Bailey and pitchers Quinn Mason and Emmett Olson.

"It's just so nice to be playing ball again and getting ready for the fall," Kissack said. "We're all so hopeful that we'll have the fall, and the spring will be back to normal. So it's awesome to be back."

Kissack, in his first season as a relief pitcher after an entire career as a starter, got in just 6 1/3 innings for Nebraska before the college season was stopped. His workout options before summer ball started in June were limited to throwing sessions with his younger brother.

Schanaman was no doubt hungry to carry the positive momentum he had started to build in Lincoln after a slow start to the season. And he's done just that, with his 1.10 earned-run average and 42 strikeouts in just 24 2/3 innings both leading the Expedition League. In his last start, he fired a 10-strikeout no-hitter.

For Olson, playing summer ball has given him a chance to make up for the senior season he lost.

Set to join NU this fall, the 6-foot-5, 225-pound left-handed pitcher from the Chicago suburbs got in only a few practices with his high school teammates before the season and the state of Illinois was shut down.

"Not having our senior high school season was kind of a big blow, and having the coaching staff reach out and have me come here was a sigh of relief," Olson said. "Being able to get ready for college competition, I think it's been a good move."

Nebraska's coaches were able to find a spot on Fremont's roster for Olson and he's living with a host family while making the adjustment to living away from home for the first time.

Olson is among the youngest players in the league, often going up against guys three or four years older than him. While he has experience with high-level competition after playing in several Perfect Game tournaments as a high schooler, this summer has provided Olson a look into what he can expect in Lincoln.

It's helped, too, that he's playing with a few future teammates..

"It's awesome, just being able to make relationships before I get down (to Lincoln)," Olson said. "I know the guys in my class, but these guys are a little bit older. So they're telling me what I should expect and what to look forward to. So it's really awesome having them out here."

The grind isn't glamorous. After beating Fremont 10-6 in front of a few hundred fans, the Sodbusters gathered at a few picnic tables behind the backstop and ate dinner well after 10 p.m. — a spread of soft shell tacos on paper plates — before boarding a bus for their hotel.

The team was in the middle of a stretch of games on 12 consecutive days. They'll get one day off Monday, then play 23 consecutive nights to end the regular season.

Compared to the alternative, though, this was heaven.

With one of its largest-ever rosters set to arrive in the fall, Husker baseball juggles the numbers

Assistant coach and recruiting coordinator Lance Harvell said recently that NU's coaching staff has been selective in who it has added to the roster at a time when it could add just about anyone.

Some players with connections to the Cornhusker State will have a chance to play in MLB's shortened season.

Where to find Husker baseball players playing baseball this summer

The Huskers have most of its team spread out across the country playing summer league ball. Here's a look at where they are.

Chat Hayes' road to Division I baseball took a detour to the community college ranks after Tommy John surgery. Now, he has a home with the Huskers.

As expected, seniors Acker, Hagge and Roskam will return for one more season with Husker baseball team

The three seniors all indicated early on in the pandemic that they would return to NU if the situation presented itself.

Nebraska pitcher Emmett Olson (35) does recovery exercises in the dugout of the Fremont Moo — where he's playing this summer — on Tuesday during Expedition League action at Moeller Field in Fremont.

Nebraska pitcher Trey Kissack watches the play on the field from the bullpen of the Hastings Sodbusters, his team for the summer, on Tuesday during Expedition League action at Moeller Field in Fremont.