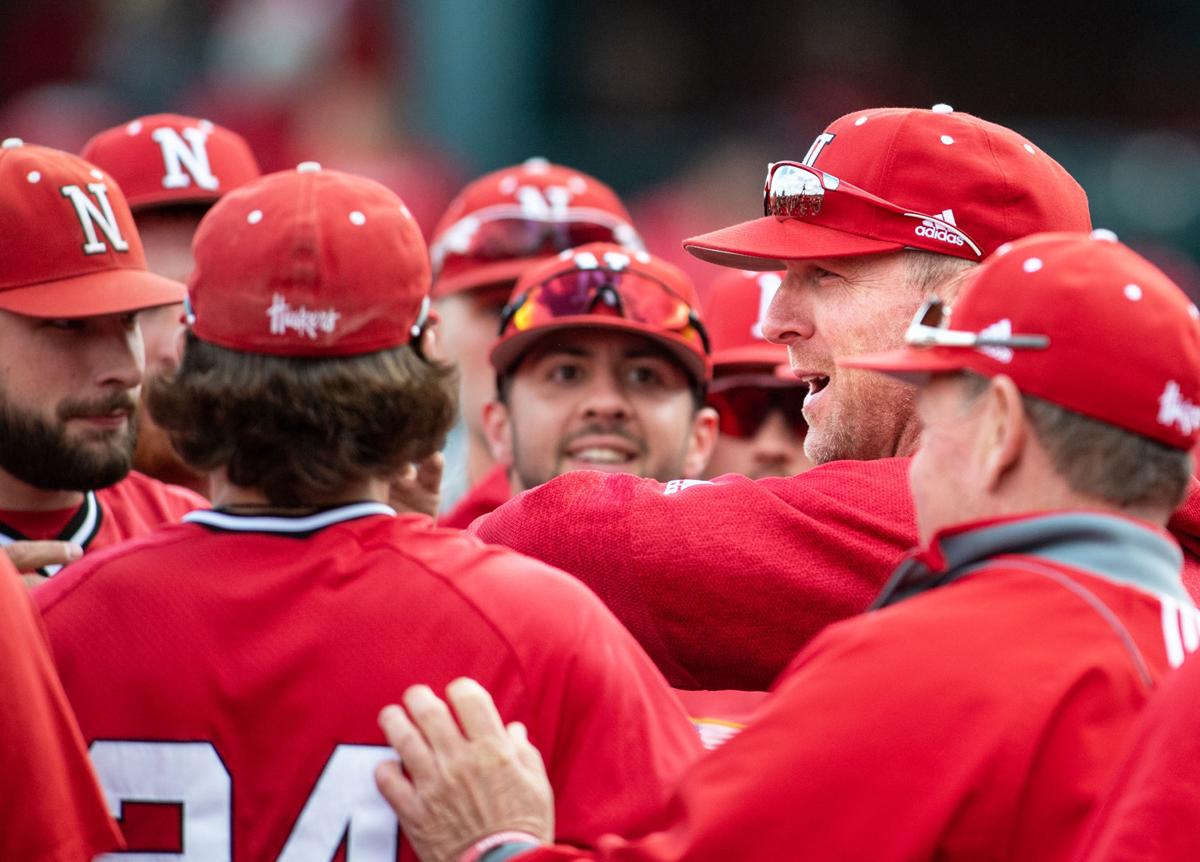 Nebraska coach Darin Erstad talks with his players following a 2-1 victory over Arizona State on May 11 at Haymarket Park. 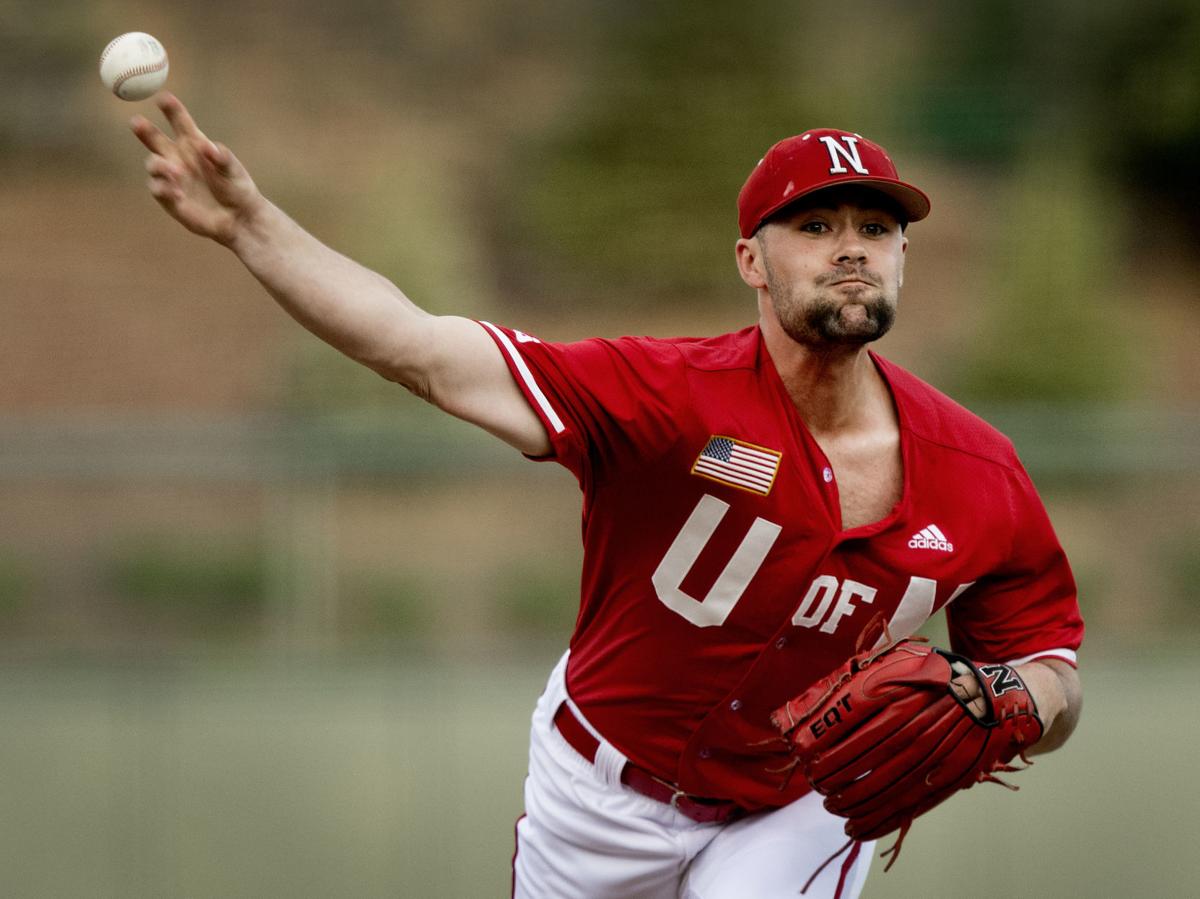 Matt Waldron was drafted in the 18th round of the 2019 MLB Draft on Wednesday by the Cleveland Indians.

OMAHA — Darin Erstad, like every other Big Ten baseball coach in Omaha this week, will tell you what happened in the regular season doesn't matter one bit when it comes to who will be the last team standing at TD Ameritrade Park on Sunday at the end of the Big Ten Tournament.

But that doesn't mean there isn't something to be learned from the 24-game march through the league schedule.

Namely, any one of the eight teams in the field could win the whole thing.

"There’s a team that finished last in our conference that could come here and win the first three games of the tournament with their pitching staff," Erstad said. "That’s the depth of this conference. It’s just fantastic. It’s just going to boil down to who plays good baseball and gets hot and gets the key hit. It’s pretty wide open."

No. 5-seeded Nebraska opens with the final game of Wednesday's session, taking on No. 4 seed Minnesota in a game scheduled to start at 9 p.m.

The matchup provides the perfect example of just how even the league was in 2019. In the second conference series of the season, the Gophers took two of three from Nebraska in Minneapolis, winning the first and third games of the series with walk-offs.

"We're definitely a more confident ball club (now)," Nebraska senior infielder Alex Henwood said. "We believe in ourselves a little bit more. We think we can beat anybody out there, and hopefully we can do that."

Minnesota, which had won the previous two Big Ten titles and last year's Big Ten Tournament, is this year's No. 4 seed.

"But all that stuff is out the window — they’ve got a great team. They won the last two Big Tens, won this tournament last year, went to a super regional," Erstad said. "So a ton of experience there. We’re going to have our hands full."

Every team figures to have its hands full. Four teams finished within two games of first-place Indiana by the time the regular season ended, and the Hoosiers won the title only after Nebraska took two of three games from league-leading Michigan to end the season.

"You can only control what you can, and that's the moment you're in right now," senior pitcher Matt Waldron said. "Tomorrow whenever we start the game, that's what we're going to do is really grind it out pitch by pitch and give our best effort in that moment."

Illinois started 1-5 in the league and rebounded to tie for third with Nebraska and Minnesota, earning the tiebreaker over both teams for the No. 3 seed in the tournament.

Nebraska, which is the No. 5 seed, went into its final game of the regular season still with a shot to win the conference title. And the Huskers didn't even play three of the teams in the tournament field: Ohio State, Maryland and Indiana.

"Who knows what the heck is going to happen. Just because you swung the bat well or pitched well a couple days ago has no bearing on what happens now," Erstad said. "It’s tournament time. It’s playoff time. You’ve got to do little things and certain guys step up that maybe haven’t done stuff throughout the year."

Nebraska's players did some of those little things over the final two weeks of the season, winning series over Arizona State and Michigan to not only build some positive momentum, but also move closer to locking up a spot in the NCAA Tournament.

As of Tuesday morning, the Huskers were solidly in, according to D1baseball.com, as a No. 2 seed in the Stillwater Regional.

Still, a strong showing in Omaha wouldn't hurt anything for NU on that front, even if the Huskers' coach isn't much for projections.

"I'm projecting that I'm going to find a way to get home and go to practice and that's about as far as my projection goes," Erstad said Tuesday morning. "It's nice to be in those conversations, but that will take care of itself with how we play."

(All games on BTN)

As long as a final transcript checks out, Dedrick Mills will be on the Nebraska campus this week. The minute he arrives, he'll be the team's most powerful running back. That said, even with Mills on the roster, I wouldn't pick Nebraska to win the Big Ten West Division, although the Huskers' chances would increase markedly.

Huskers fall late in the night in regular-season finale; will play Minnesota at Big Ten tourney

Nebraska’s first 16 hits against Michigan in the teams' series at Haymarket Park were all singles, and good enough to win the first game and p…

As they played Michigan into the night Thursday, Nebraska’s seniors likely weren’t too worried about what lay ahead of them Friday.

Nebraska coach Darin Erstad said he didn’t know what the pitching role for Colby Gomes was going to be coming into the year, but it’s been a pleasant surprise what he has done.

Steven M. Sipple: No need for vote of confidence, but Moos bullish on Erstad's coaching

Please don't read the following comments from Nebraska athletic director Bill Moos as a dreaded vote of confidence for Darin Erstad. The eighth-year Husker skipper doesn't need a vote of confidence from his boss. But know this: Moos is bullish on Erstad in a big way. "Darin is my kind of guy," Moos told the Journal Star.

Big Ten baseball: Led by Iowa, upsets abound in first round of tourney

OMAHA — You won't be surprised to hear that Darin Erstad isn't much of a crier on the baseball field.

'Common sense' prevails with postponement of Nebraska-Iowa in the Big Ten tourney; teams will play Friday

OMAHA — Nebraska and Iowa were going to play late into the night.

Nebraska coach Darin Erstad talks with his players following a 2-1 victory over Arizona State on May 11 at Haymarket Park.

Matt Waldron was drafted in the 18th round of the 2019 MLB Draft on Wednesday by the Cleveland Indians.