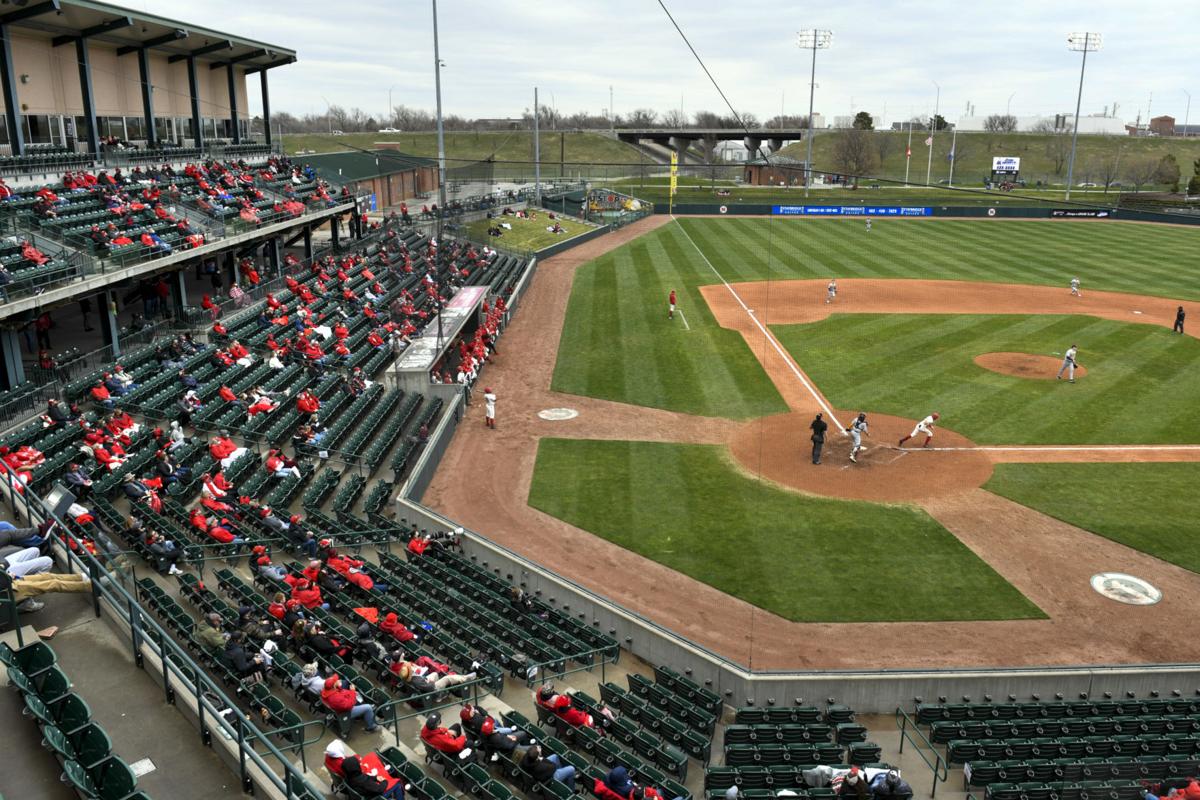 Fans watch Nebraska play Minnesota at Haymarket Park on Friday, two days after the Big Ten announced its teams could set attendance based on local health and safety protocols. A crowd of 1,647 attended. 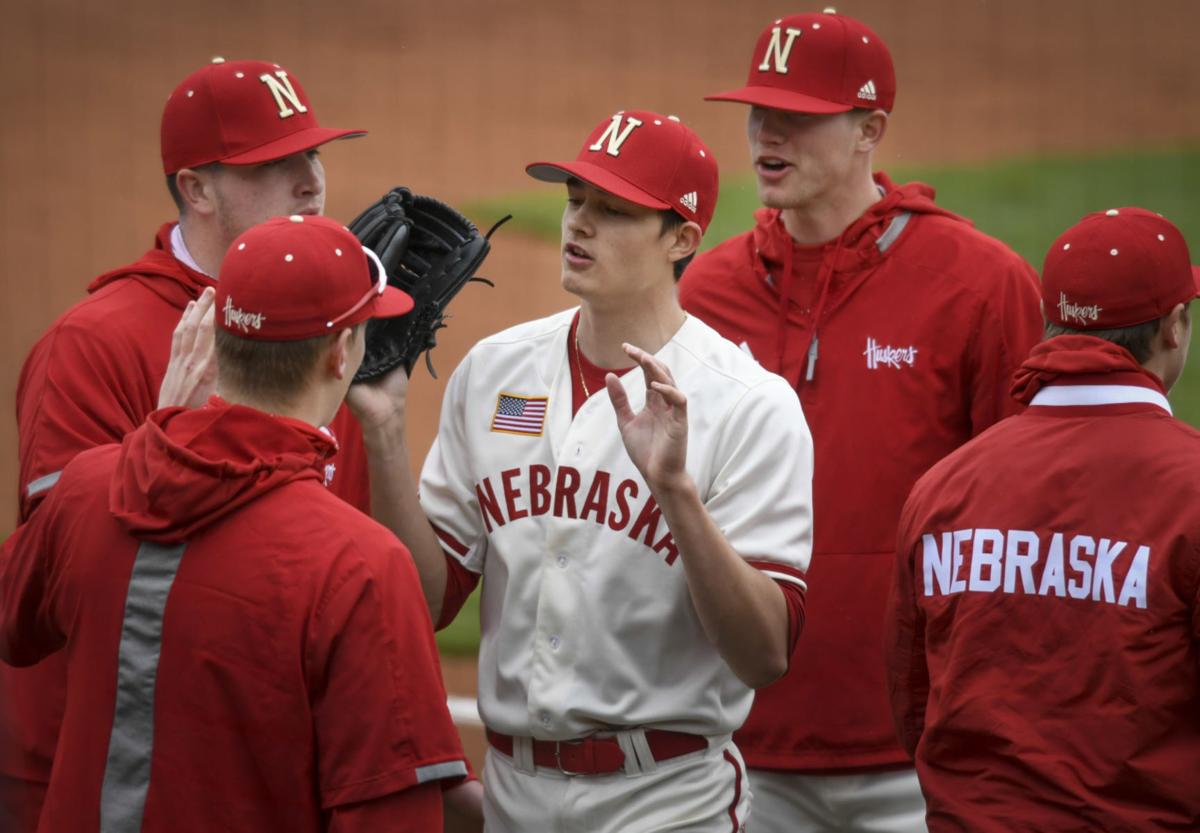 Nebraska's Cade Povich returns to the dugout after pitching against Minnesota on March 26 at Haymarket Park. 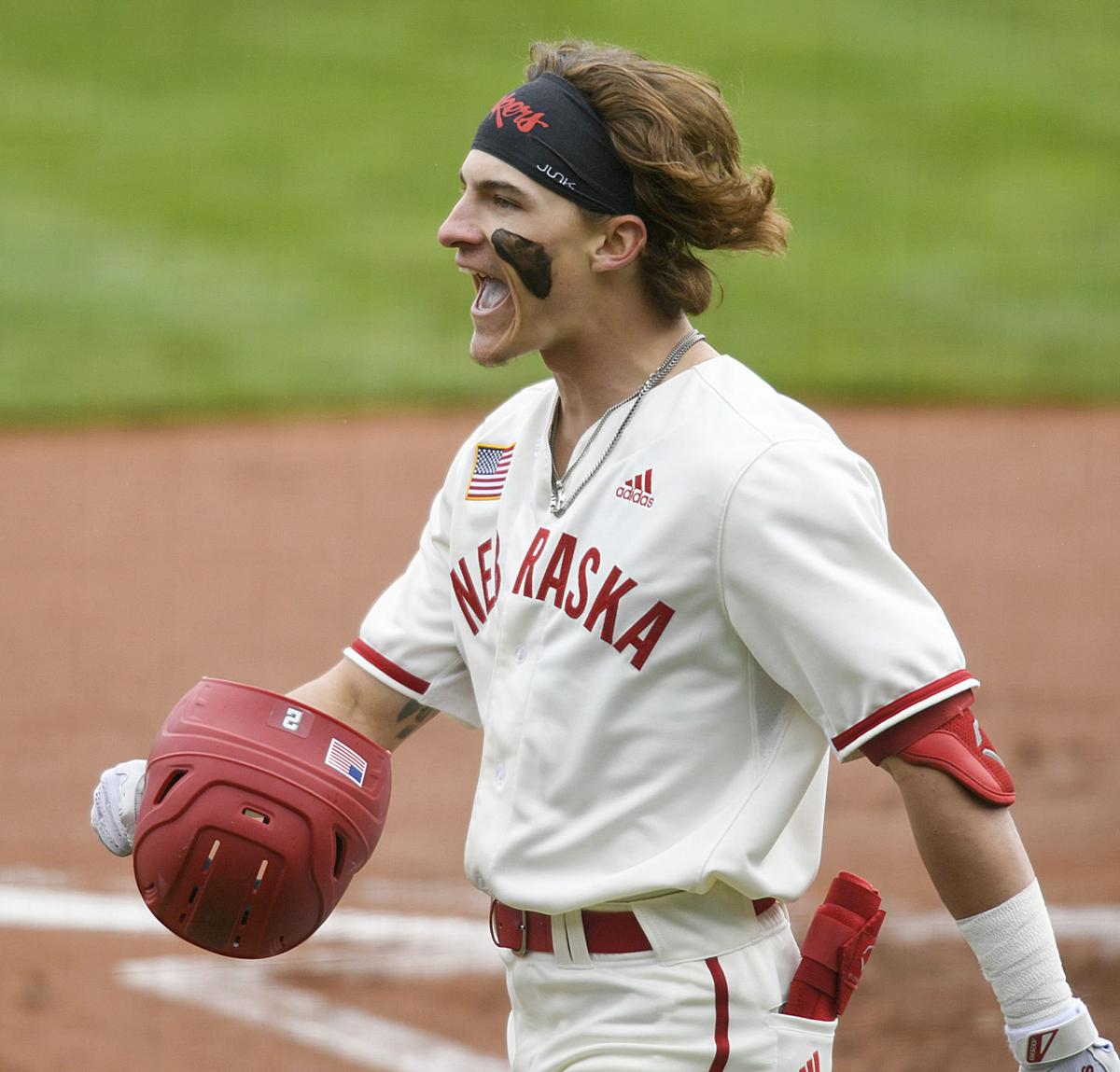 Nebraska's Jaxon Hallmark goes to the dugout after his solo home run against Minnesota on Friday at Haymarket Park.

It didn’t take long for a joyful noise to fill Haymarket Park.

Povich gloved it, tossed to first, and the crowd of 1,647 roared.

'Championship Sunday': Why Husker baseball is placing such an emphasis on the last day of the weekend

Baseball was back in Lincoln, and so were the fans along with it.

The Huskers made sure those fans had plenty to get loud about, leading from the start and getting a dominant outing from Povich to beat Minnesota 6-1 in the first Nebraska sporting event played in front of fans in more than a year.

NU was prepared to allow 2,700 into Haymarket Park, just two days after the Big Ten announced its teams could set attendance based on local health and safety protocols. And while just more than half that number showed up, it was still pretty good for 2 p.m. on a Friday.

And way better than what had become the norm over the previous year.

"It was nice. I think throughout the season, knowing at the start we didn't have fans and the way some of the other conferences and some of the other teams where shifting towards it (was hard)," Povich said. "When we got that announcement, especially right before our first home week, it was awesome.

"I mean, there's no other fans that are greater than Husker fans."

The fans were lined up several hundred feet deep outside the park's gates before the game, and spread throughout the grandstand and berms by the time Povich delivered the game's first pitch.

Those in attendance had to sit through a brief, light rain shower just prior to the game starting. Considering the past year, why not?

But by the seventh inning, the sun was out, and the Huskers (8-4) were rolling.

It was the first crowd at a Nebraska athletic event since March 11 of last year, when about 4,000 watched the Husker baseball team beat Northern Colorado.

And just like that crowd, Friday's attendees saw a victory.

"It was a welcome sight for everything we’ve been through for the last year. Pretty awesome that we were able to have a home game when they make that announcement to have fans in the stands," NU coach Will Bolt said. "It felt good. I said it this week, most everybody in our locker room who chose to come here, one of the reasons they did was because of our fan base. So, really cool to see, knew they would show up even with a little bit of rain, even with a 2 o’clock start, I thought we had a great crowd."

Watch now: Nebraska pitcher Povich says 'a little bit of everything' worked for him in a dominant outing

Jaxon Hallmark, Nebraska's second hitter of the game, blasted an offering from Minnesota starter Sam Ireland well over the left-field berm to open the scoring.

Spencer Schwellenbach delivered an RBI single in the third, and the Huskers scored three runs in the sixth on three hits and a Minnesota error to break things open.

That was plenty for Povich as the left-hander delivered one of his best performances of the season to drop Minnesota to 3-9.

The Bellevue West product threw 70 of his 102 pitches for strikes, and allowed one runner past first base while improving to 2-1. He didn't walk a batter and scattered four hits, three of which were singles. His seven innings pitched were a career-best, and he had double-digit strikeouts for the second time in his last three starts.

"I thought it was a really complete game," Bolt said. "Of course you'd maybe like to cash in on more of those opportunities to score and stretch the lead a little bit. But we played small ball, hit a few extra-base hits, stole some bases, played clean defense for most of the game, and threw strikes on the mound." 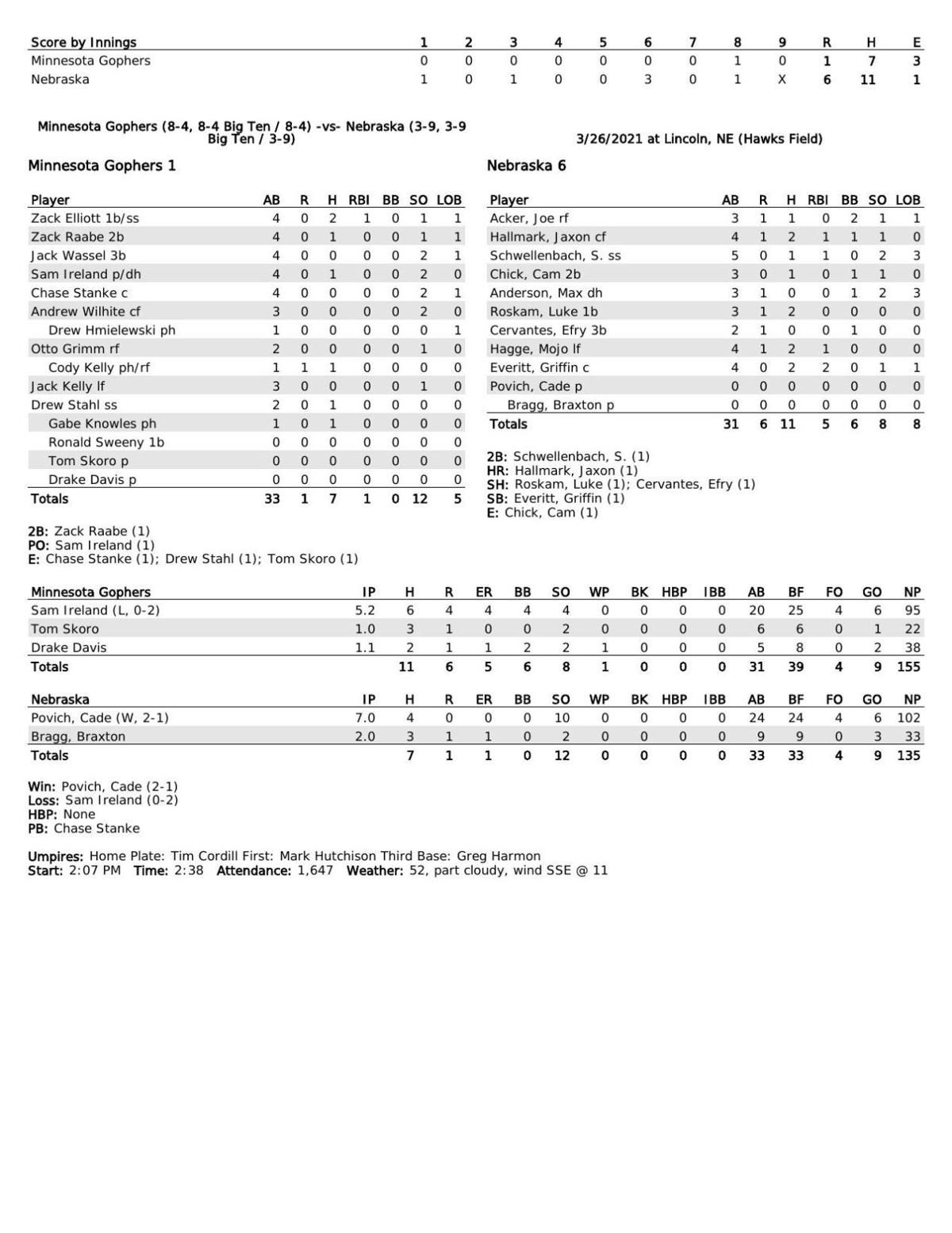 Cam Chick's big weekend at Iowa led to the Husker baseball slugger being named Big Ten player of the week.

The win gave Nebraska (7-4) the series victory after Iowa took Friday's opener, and provided some validation that NU's offense is back on track.

A child sustained a head injury after being hit by a car that was driven by their parent on Friday afternoon.

'We just took the momentum': Husker baseball rallies, then rolls to sweep doubleheader from Minnesota

The point is, Chris Basnett writes, the Huskers are winning — and finding different ways to do it.

Schanaman gets into 'compete mode,' shuts down Minnesota as Huskers finish off four-game sweep

Against Minnesota on the prettiest Sunday of the year, Schanaman showed why the Husker coaches are confident in him.

Fans watch Nebraska play Minnesota at Haymarket Park on Friday, two days after the Big Ten announced its teams could set attendance based on local health and safety protocols. A crowd of 1,647 attended.

Nebraska's Cade Povich returns to the dugout after pitching against Minnesota on March 26 at Haymarket Park.

Nebraska's Jaxon Hallmark goes to the dugout after his solo home run against Minnesota on Friday at Haymarket Park.