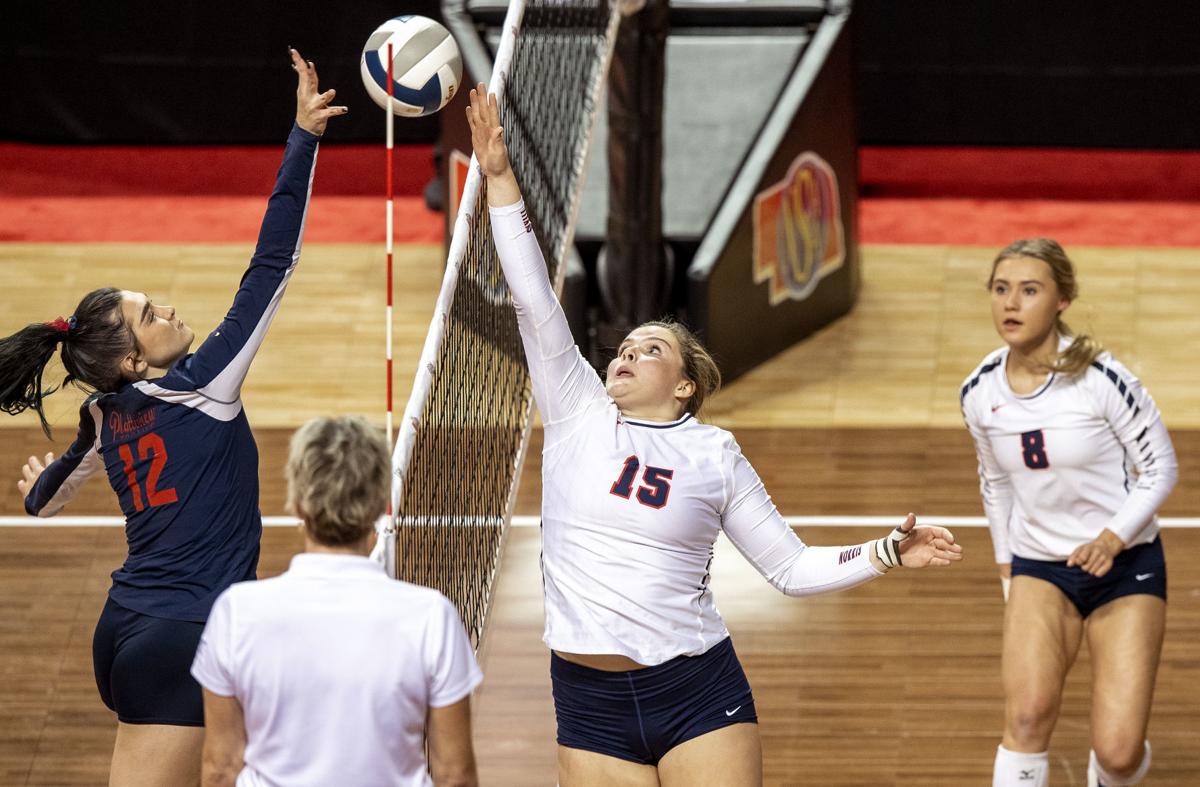 Norris' Brianna Stai (15) goes up for the ball against Platteview's Piper Hart (12) as Maisie Boesiger looks on in the first set on Thursday during an opening-round match at the Class B state volleyball tournament at Pinnacle Bank Arena. 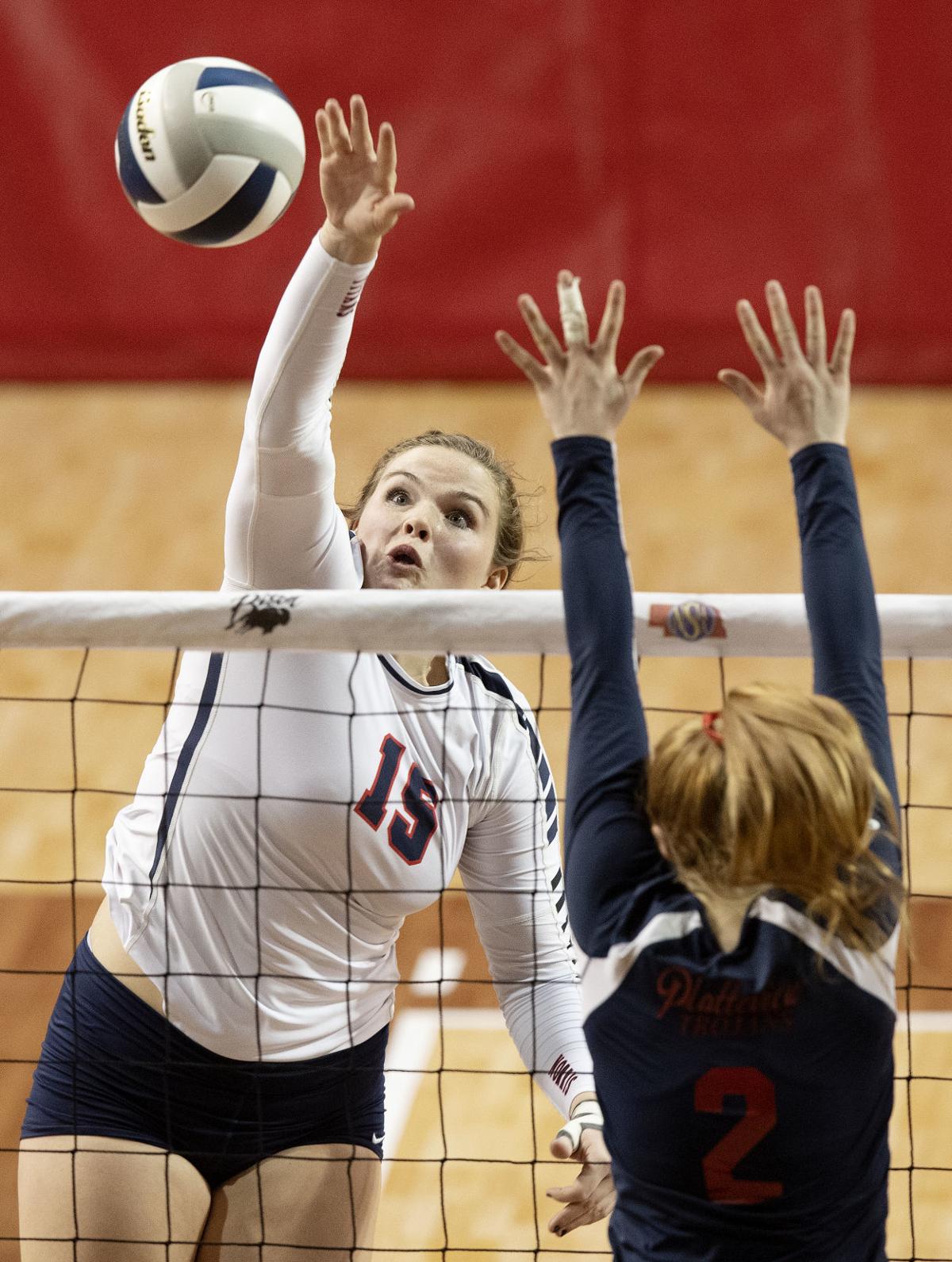 Norris' Brianna Stai (15) goes up for a kill in the second set against Platteview's Anna Koehler on Thursday during an opening match in Class B at the state volleyball tournament at Pinnacle Bank Arena.

It pays to have previous state tournament experience.

That previous experience showed late in Class B No. 3 Norris’ 25-14, 15-25, 27-25, 25-23 win over fifth-ranked Platteview in the opening round of the state volleyball tournament Thursday at Pinnacle Bank Arena.

The Titans overcame a pair of deficits -- they trailed 21-18 in the third set and 23-21 in the fourth -- to advance to a Friday semifinal against top-ranked and four-time defending champion Omaha Skutt at 7 p.m. at PBA.

“We put ourselves in position to win those sets, we just fell short,” Platteview coach Shae Spetch said. “We don’t have a lot of experience in these big games and Norris does. They are a good team and really put pressure on us at the end.”

The Titans leaned on veterans as well as a freshman down the stretch. Senior libero Molly Ramsey, a Kansas State commit, came up big with a kill on a roll shot to finish off a competitive third set. Freshman outside hitter Gracie Kircher contributed two big kills to fuel Norris in the set's late stages.

Junior right side Brianna Stai hammered a key kill in the fourth set to tie the score at 20 apiece. Kircher’s kill cut the lead to 23-22, and her ace block sandwiched around a pair of Trojans’ hitting errors closed the deal.

“You know I think them being here before helped,” Norris coach Christina Boesiger said of her kids. “Bri, Ella (Waters), Kalli (Kroeker) Molly, Masie (Boesiger), Maddie (Clauss)…we have a good mix that have been here before and had a taste of it. I thought they did a really nice job.”

Kircher led the Titans with 15 kills which Kroeker chipped in 11. Boesiger dished out 45 assists, while Ramsey tallied 27 digs.

After a first-round exit at state last year, Coach Boesiger said her team is looking forward to sticking around.

“The goal is to play on Saturday,” she said. “We knew this first game was needed to have that happen. They’re super-excited.”

The top-ranked SkyHawks raced to a 21-0 lead in the opening set as Nebraska commit Lindsay Krause pounded seven of her match-high 13 kills in the frame.

“We served well, we passed well, we might have had a record for hitting efficiency,” SkyHawks coach Renee Saunders said.

As is the goal each year, Saunders said her team’s goal is to play is best match at the very end of the season.

“Our goal this year is to peak at this time and play our best volleyball.”

The opening match of the Class A state high school volleyball tournament was hardly a typical No. 1 seed vs. No. 8 matchup, and it didn’t play…

Wahoo played Thursday’s first round like it had been here before. The two-time defending Class C-1 state champion opened with a 25-17, 25-20, 25-19 win against No. 8 Norfolk Catholic on Thursday at Lincoln North Star.

Power and depth can carry a volleyball team a long way.

Class D-2 No. 3 Wynot survived a scare to pick up its 25th win of the season, rallying past Falls City Sacred Heart in five sets in the first …

The state high school volleyball tournament is here. You ready? If not, we've got you covered with live scores, team ratings and updated brack…

A look at state volleyball pairings.

With 48 teams from across the state converging upon Lincoln this week, many high school players aren’t just looking forward to their own matches.

Naturally, the goal is to improve upon the previous season.

Class C-2 No. 4 Lutheran Northeast got 23 kills from Rebecca Gebhardt to defeat No. 5 Bishop Neumann in four sets Thursday at Lincoln Southwes…

One of Marriah Buss’ booming strikes hit the hands of a Chadron player in the back row, and ricocheted high into the air behind the court and …

A minor bump in the road wasn’t enough to slow down a determined Waverly team.

State volleyball: Meyer sisters power up Superior in first round

Top-ranked Superior had to find its serve, but when the Wildcats did, they advanced to the Class C-2 semifinals of the state volleyball tourna…

Norris' Brianna Stai (15) goes up for the ball against Platteview's Piper Hart (12) as Maisie Boesiger looks on in the first set on Thursday during an opening-round match at the Class B state volleyball tournament at Pinnacle Bank Arena.

Norris' Brianna Stai (15) goes up for a kill in the second set against Platteview's Anna Koehler on Thursday during an opening match in Class B at the state volleyball tournament at Pinnacle Bank Arena.