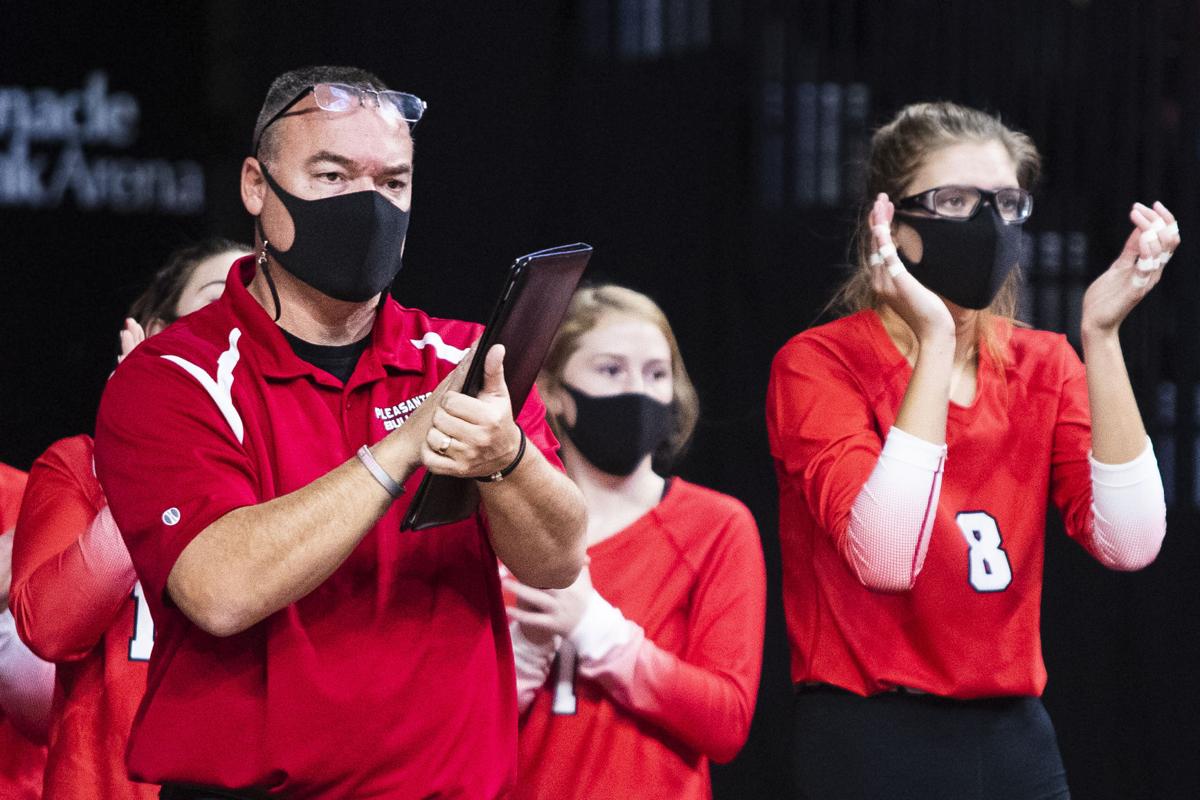 Pleasanton coach Shane Nordby leads his team against Johnson-Brock during the first round of the Class D-1 state volleyball tournament Thursday at Pinnacle Bank Arena. Nordby is one of 10 men who are head coaches of teams at the state tournament this week. 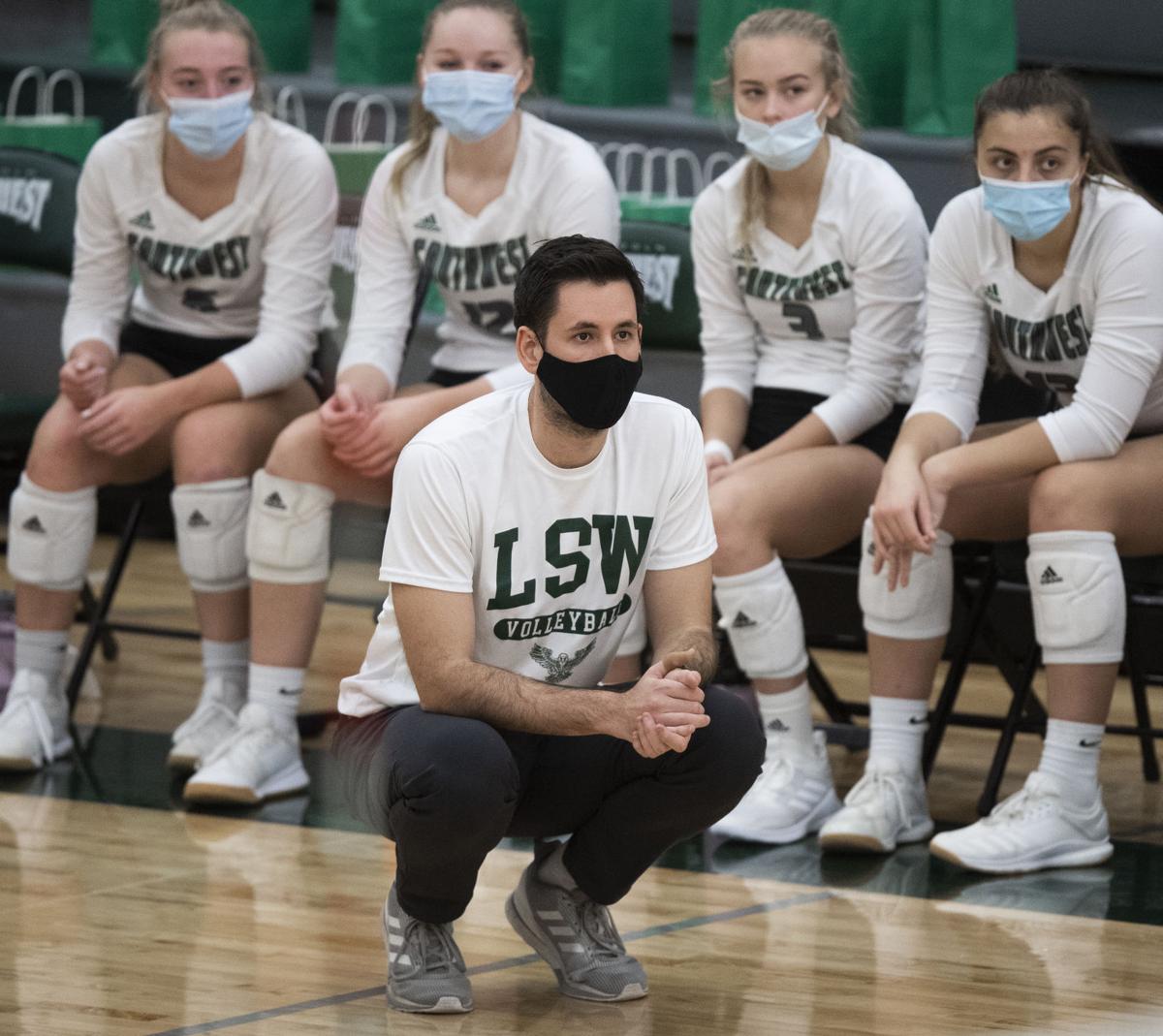 Sometimes the path we didn’t intend to take turns out to be a good one.

John Cook, who is now one of the most famous volleyball coaches in the nation, has one of those success stories. The Nebraska head coach set out to be a high school football coach, and he was for a few years in California.

But when he took his first full-time high school teaching job in San Diego, he had to coach volleyball.

“My first job offer was to teach geography at Francis Parker High School, and they said we need you to coach girls volleyball, girls basketball and girls softball,” said Cook during a speech in 2017. “And I’m like, ‘Well, I’m a football coach.’ They said, ‘Well, this is Title IX.’ Girls sports were just getting started in San Diego. I needed a teaching job, so I took it, and that’s how I started coaching volleyball.”

Cook learned the sport by playing beach volleyball, watching the national volleyball team practice and going to clinics. And the rest is history. Cook’s high school teams were good, he co-founded a club team, and that club is how he met Terry Pettit, who gave him his start in college coaching.

While the majority of high school volleyball coaches in Nebraska are women, there are some men, including teams at the state volleyball tournament this week. Of the 48 teams at state this week, men are the head coaches of 10. There are three in Class A; two apiece in C-1, D-1 and D-2; and one in B.

About 55 of the 280 high school volleyball teams in Nebraska have a man as head coach. And some of them have their own story like Cook on how they got their start in the sport.

“When you get into teaching, sometimes you get assigned certain things, and that’s how I got into it,” said Maywood-Hayes Center coach Kory Rohde, who has also coached boys and girls basketball and track during his career. “I got in as an assistant coach and made my way up to head coach, and ended up liking it.”

About 30 years later he’s still coaching, and this is his best year yet. The Wolves made the state tournament for the first time in the seven years of the program, have a 29-0 record and will play in the state semifinals on Friday.

Rohde first coached volleyball at Wallace. He played football in high school at Overton and knew “nothing” about volleyball.

“I was lucky to have Mandy Monson, she was at Wallace when I started out and she ended up coming down here and playing for the Huskers,” Rohde said. “I learned a lot of the game from her. She was just phenomenal. I just learned from the players, and I had a good head coach, Larry Seger. He was a great guy.”

When he was younger, Rohde would play during practice.

“I loved it then,” Rohde said. “Once you figure out volleyball, you realize how great it is and the power that’s involved. It’s fun, and it’s competitive. That’s probably another reason why I love coaching volleyball is because of how competitive and exciting it is.”

It’s natural that there are more female volleyball coaches. Most played in high school, and some in college. There are about 25 states that offer boys high school volleyball, but Nebraska isn’t one of them, so most male teachers in the state haven't played.

But he liked watching his friends play volleyball, and when he got to college at UNL he played on the men’s club volleyball team. Novotny changed his major to education and took a volleyball coaching class at UNL taught by Mary Schropfer. He later coached with Schropfer at Lincoln Southwest and became the head coach when she retired.

Roger Behrends, the head coach at South Platte in western Nebraska, also didn’t set out to be a volleyball coach.

“I started in 1984 at my first teaching job (at Wheatland). It kind of came with the job,” Behrends said. “You just kind of learn as you go and I coached for over 30 years. I got out for four years, and South Platte came and talked me into coaching again this year. I’ve missed it. I’ve missed the competition.”

Behrends was hired as a head coach without any previous experience. He had about two months to learn as much as he could before the first practice. It helped that his brother, Jim, coached volleyball at Chappell. Behrends’ niece is former Nebraska volleyball player Kim Behrends.

Roger Behrends also went to Ogallala to learn about the sport from Steve Morgan.

“I got lucky, I ran into all kinds of talent and we went to state my first eight years at Wheatland,” Roger Behrends said. “I guess I was meant to be a volleyball coach. I coached boys basketball for years, too, and only got down here once, but volleyball, this is my 10th time down here.

“But the game has changed so much in the 30 years here. It’s amazing. The kids are highly skilled and it’s quicker and everything about it is a lot more fun.”

Matt Koehn-Fairbanks, the coach of undefeated St. Paul, had more of a player background. Growing up in David City and St. Paul he taught himself the skills of the sport, and then in high school he played in some sand tournaments in Grand Island. He played college volleyball at the NAIA level in college at Graceland in Iowa.

Millard West coach Joe Wessel is part of the next generation of volleyball coaches. He got into the sport through his family. His sisters played for Humphrey St. Francis, and they put up a net at the family farm and played.

He played men’s volleyball for one year at Peru State, and then transferred to Wayne State, where he began his coaching career helping with the women’s team there. In the summer he also coached at camps at Nebraska and Creighton.

After moving to Omaha to teach elementary PE he got a job as an assistant at Millard West. He also coaches club volleyball with Nebraska Premier.

Papillion-La Vista coach John Svehla is from Columbus and got his start in the sport playing sand volleyball when he was 16. His first coaching job was the freshman B team at Columbus in 2000 while attending Central Community College. He later transferred and played men’s volleyball at Peru State.

Falls City Sacred Heart is the only team to beat the Griffins this season. The rematch comes with big stakes.

Cook thanks wife, assistant coaches and former players as he goes into AVCA Hall of Fame

KANSAS CITY, Mo. — One of the reactions when it was announced this summer that John Cook had been chosen to go into the American Volleyball Co…

State volleyball: A look at Friday's most intriguing semifinals

Your guide to navigating a loaded slate of semifinal matches Friday at Pinnacle Bank Arena.

After two days of quarterfinals at Pinnacle Bank Arena, 24 teams are left standing in the chase for a state volleyball title.

For teams in different parts of the state, Pleasanton and Archbishop Bergan know each other quite well. They meet Saturday for a state title.

After four action-packed days at Pinnacle Bank Arena, Luke Mullin wraps up the 2020 high school volleyball season with ratings for all six classes.

Nebraska volleyball schedules scrimmage that will be shown online

The Nebraska volleyball team will have a Red-White Scrimmage on Thursday at the Devaney Sports Center.

Pleasanton coach Shane Nordby leads his team against Johnson-Brock during the first round of the Class D-1 state volleyball tournament Thursday at Pinnacle Bank Arena. Nordby is one of 10 men who are head coaches of teams at the state tournament this week.