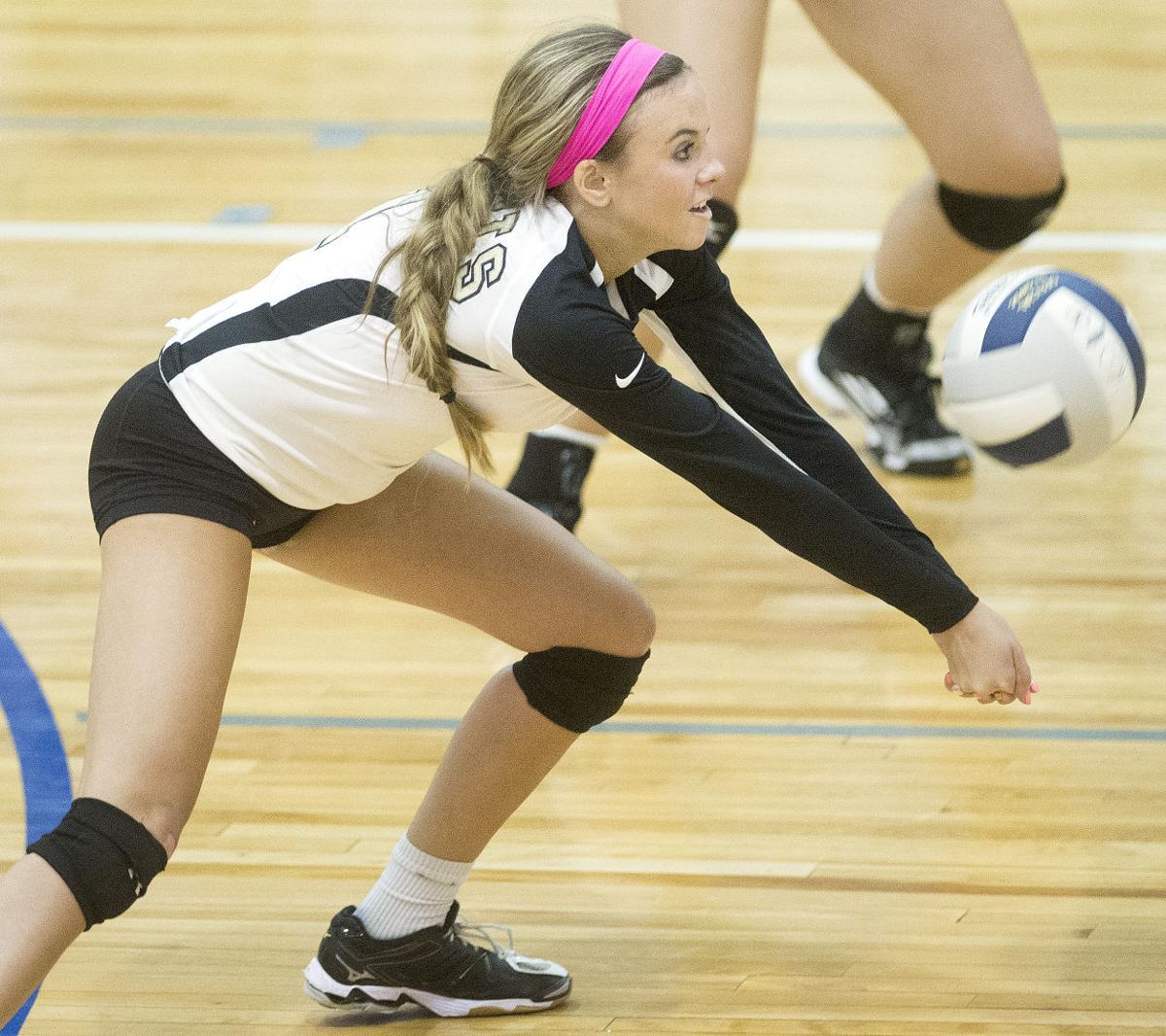 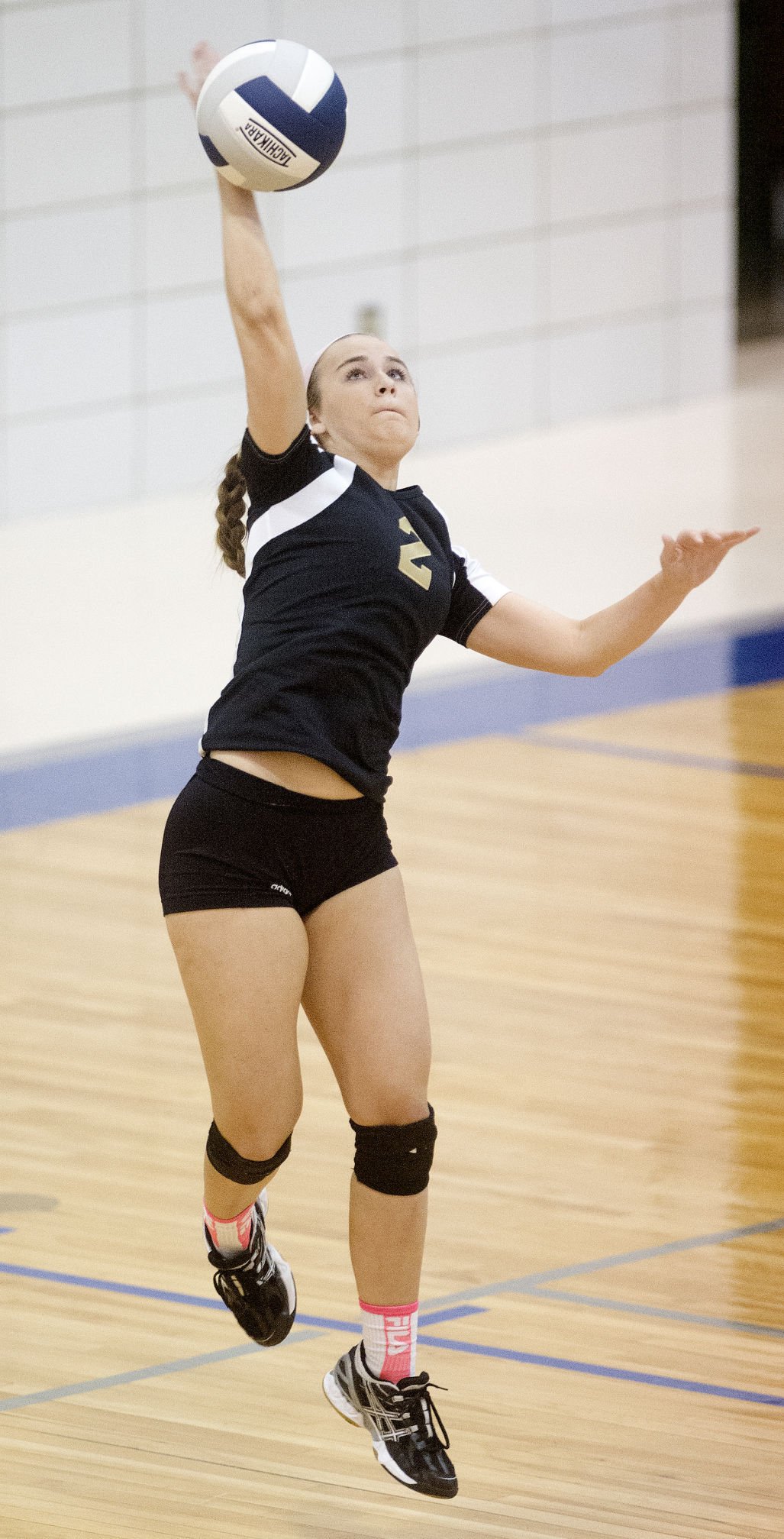 Lincoln Southeast's Karsin Underwood serves against Lincoln East during a September match. The three-sport athlete plays a key role for the Knights' defense.

Growing up in the same neighborhood, Megan Dobbs and Karsin Underwood spent hours as young girls playing pepper games and firing volleyballs back and forth at each other.

“We’d have to get a certain number before we’d switch to another drill,” Underwood recalled.

Those driveway contests of ball control have given way to three years of high-stakes matches as defensive stalwarts on the Lincoln Southeast volleyball team. And it’s the juniors’ back-row play that’s helped start it all for the No. 6 Knights (22-14) during that span, who are in the Class A state tournament for the fourth straight year, including semifinal appearances in 2013 and ’14.

Before senior setter Elizabeth Gifford (937 assists this season) distributes the ball to the Knights’ 1-2 punch at middle blocker — Nerissa Moravec (311 kills, 122 ace blocks) and Melanie Brecka (250 kills, 69 ace blocks) — it’s either Dobbs or Underwood who quite often gets things in motion off a dig or a pass in serve-receive.

Even though Dobbs is 5-foot-6 and Underwood 5-5, “people on our team look up to them because they’ve been playing since their first match as freshmen,” Southeast coach Annie Healey said.

“I hold them to a high standard, and they’ve embraced every challenge that’s come their way,” said Healey, a defensive specialist in college at Nebraska-Omaha. “They’re both very athletic and competitive, and I know they’ll find a way to keep the ball in the air when they’re back there (in the back row).”

Even though they’re both defensive specialists, the good friends don’t see any competition between them for playing time. Dobbs earned the libero jersey this fall after last year’s libero, Carly Sheppard, graduated.

Dobbs leads the team in digs with 533, with Underwood second with 302. They’ve combined to serve 38 aces. Dobbs popped up a school-record 42 digs in a win earlier this season over Omaha Westside.

“I know Megan is a better libero, so I was OK with it, as long as I get in at right-back, and I can do my thing there,” Underwood said.

Underwood is a three-sport athlete who's started the last two years on the Knights’ basketball team and plays forward in soccer. She does not play club volleyball and her emphasis on select basketball in the summer limits her back-row touches coming into the season.

“When the (volleyball) season first starts, I’m a little rough,” Underwood said. “It usually takes me a few weeks to get everything to where I’m playing well again.”

As the libero, Dobbs has stepped up as a vocal leader in the back row.

“I’ve gotten more comfortable calling shots for our hitters, letting them know where to hit the ball and where to adjust the block to make sure the ball gets funneled back to us,” Dobbs said.

The Southeast defense will have its hands full in its first-round match against No. 2 North Platte on Thursday at 5:30 p.m. at Pinnacle Bank Arena. The Bulldogs, who have defeated the Knights twice this season, have one of the most potent offenses in the state behind 6-1 senior all-state middle blocker and Colorado State recruit Olivia Nicholson and 5-11 senior outside hitter Allison Kuenle, a Nebraska-Kearney recruit.

“They’re an extremely talented team and they have a lot of great hitters,” Dobbs said. “It helps that we’ve seen them before and we have a week to prepare for them.”

A look at results and matchups for this week's state tournament in Lincoln.

Lincoln Southeast's Karsin Underwood serves against Lincoln East during a September match. The three-sport athlete plays a key role for the Knights' defense.