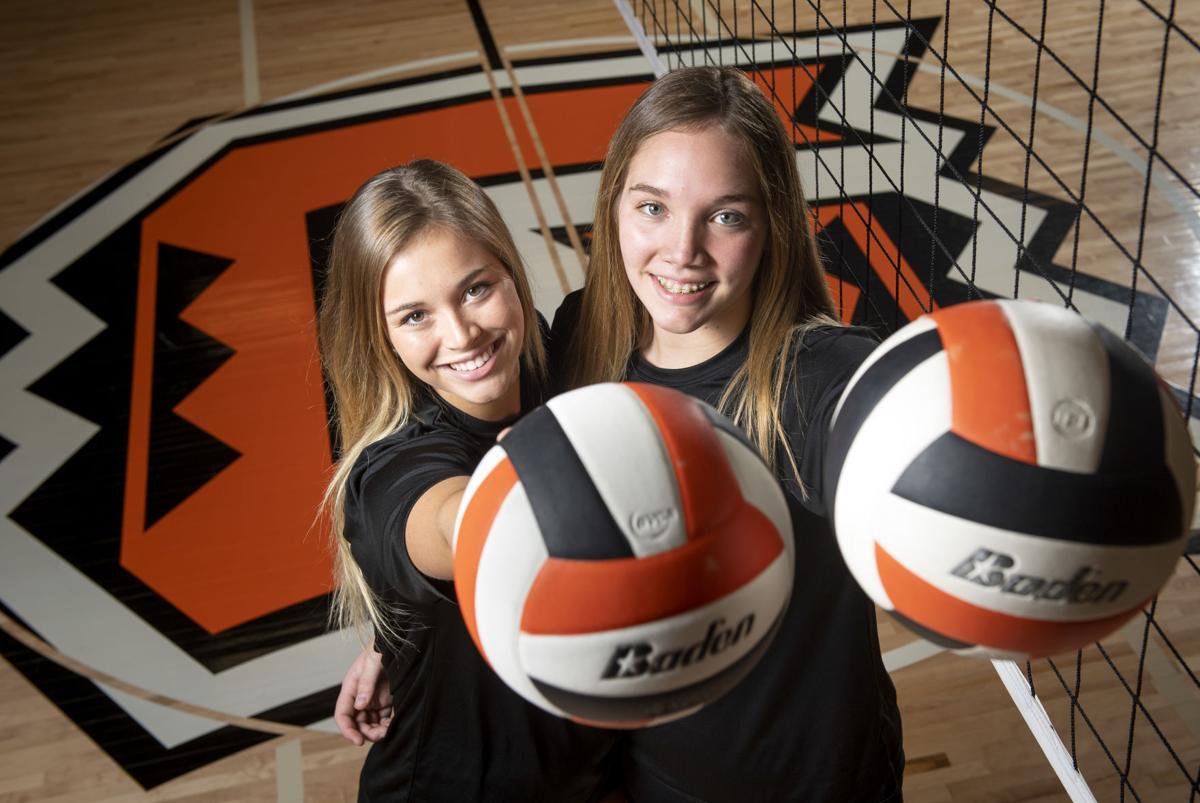 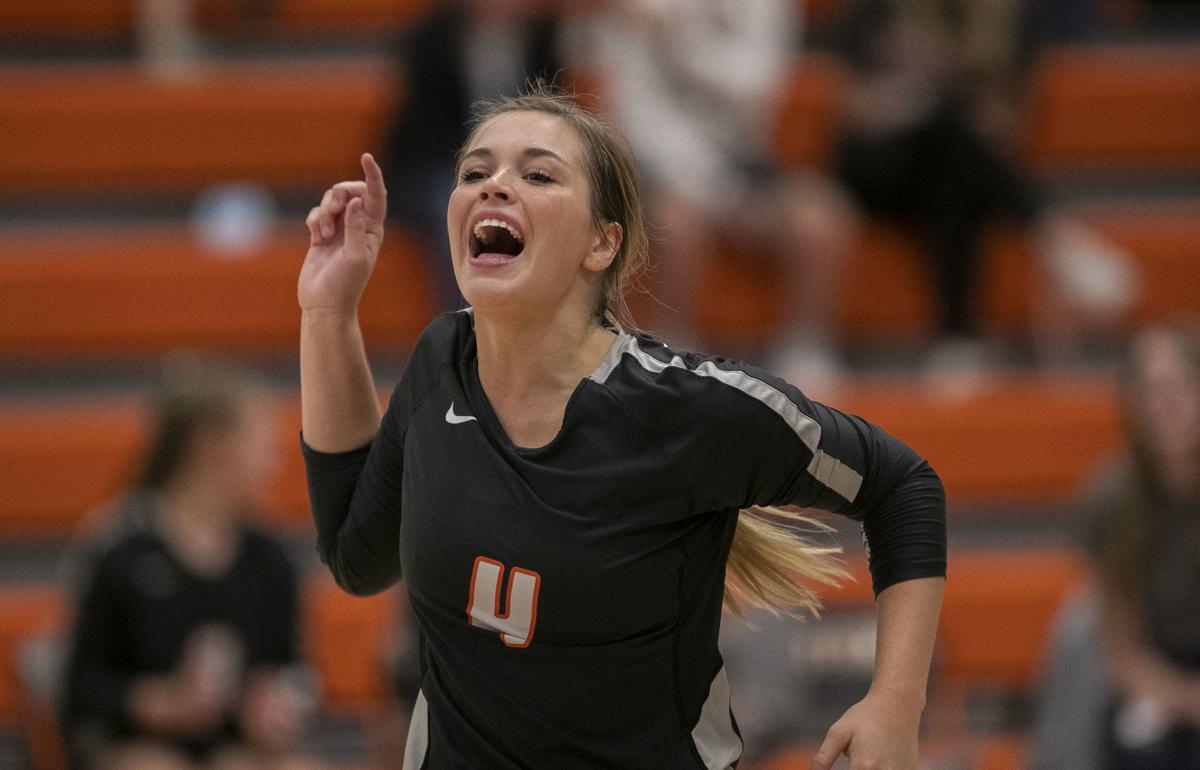 Diller-Odell’s Addison Heidemann reacts after a score during the third set as the Diller-Odell Lady Griffins defeat the BDS Lady Eagles in the A Division championship of the MUDECAS Tournament on Sept. 17 in Odell.

Nebraska is one of the top states in the nation per capita for producing college volleyball players at the NCAA Division I level.

We’ll be reminded of that again next week on National Signing Day for college volleyball, when several players will sign on to Division I programs. They include three in-state players who will sign with the Huskers — Omaha Skutt’s Lindsay Krause, Elkhorn South’s Rylee Gray and Waverly’s Whitney Lauenstein.

Still, what’s happening on the volleyball court at Diller-Odell is really something. There are only 27 girls in the high school, but two of them will probably play Division I volleyball.

State volleyball: First, a rematch with the coaches, but then a chance to make some noise at state for Centennial

That would be sisters Addison and Karli Heidemann, who are leading Class D-2’s No. 1 team into the state tournament this week.

And this small-town story gets better. The Heidemanns live on a farm just outside of Harbine, a small village on U.S. 136 between Beatrice and Fairbury.

“It’s tiny. There a few houses there,” said Addison Heidemann of Harbine.

But that village can claim a couple of nationally ranked volleyball recruits.

Addison Heidemann is a setter who will join the Iowa State volleyball team next fall as a walk-on. She’s ranked 127th in the nation in the senior class by PrepVolleyball.com.

Karli Heidemann is a hard-hitting, 6-foot-2 outside hitter. She’s only a sophomore, so her college recruiting won’t get serious until this summer, but she’s ranked No. 63 nationally in her class. Prepdig.com lists her as the No. 2 player in the state in her class.

The recruiting rankings are largely based on club volleyball tournaments, and the Heidemanns play for Volleyball Club Nebraska, the Lincoln-based club founded by former Nebraska setter Maggie Griffin.

While Diller-Odell has been a successful program, the odds aren’t high for what’s happened for a team playing in the smallest of Nebraska’s six classes.

“It’s not very common that you get two Division I athletes out of a small, D-2 school,” said Diller-Odell coach Reba Hestermann.

Addison Heidemann credits both her club team and high school, along with having played for so long.

“I come from a small school, so basically everyone starts playing sports when they’re really young,” she said.

During a club tryout Griffin felt like Addison Heidemann could be a good setter, and they worked for several years to develop those skills. Once she reached high school, Iowa State coaches saw her play and invited her to attend one of their summer camps.

During the club season the family makes the one-hour trip to Lincoln about three times per week.

There also were opportunities for them to improve in open gym sessions at Diller-Odell — there were good players there, too. There are only 11 players out for volleyball, but several of them play club, either for Nebraska Juniors or VCN. Many of the schools in Class D aren’t that close to a city that have multiple options for a club volleyball experience.

Another senior, outside hitter Ava Lovitt, is committed to play at Hastings.

Karli Heidemann earned all-state honors as a freshman last season when Diller-Odell won the Class D-1 state championship, and is the go-to player for the Griffins this season.

“I think (Karli) can go high-tier Division I volleyball. She has the potential,” her sister said.

Karli Heidemann has 454 kills this season with a .415 hitting percentage. She’s averaging a remarkable 5.3 kills per set. Her season high for kills was 30 against Falls City Sacred Heart.

Diller-Odell won state last year but had a lot of work to do this season to replace starters at both middle blocker and libero. Also, head coach Kandice Jurgens stepped down after winning state so she could have more time to watch her daughter, Madison, play for the South Dakota volleyball team. Hestermann was previously an assistant at the school.

A look at the top volleyball players from around the state in 2019.

A near miss in the second set didn’t affect the Class D-2 top-rated Griffins in the third, where the team sealed another tournament win.

The Bluejays are the second-smallest school in Class B based on enrollment. But they will be playing among the largest and best teams next week.

This year's state volleyball tournament is loaded with Division I recruits

Just how loaded is the state tournament field? There are 23 Division I volleyball recruits in it.

Here's a look at the state tournament leaders in kills, digs and assists.

State volleyball: Information for fans able — and unable — to attend the show at PBA

The state volleyball tournament begins Wednesday. Here's a quick rundown of what to expect.

There have been cancellations, postponements and positive tests, but 48 teams will still be right where they hoped — Pinnacle Bank Arena.

State volleyball: A closer look at the D-2 bracket, where the Griffins look to go back-to-back

Diller-Odell swept its way through the bracket last season, but added depth among contenders make a similar feat unlikely this season.

State volleyball: A closer look at the D-1 bracket, where motivation is driving No. 1 Pleasanton

BDS is battle-tested (its seniors are 8-1 in state tournament matches) but Pleasanton has been a cut above the rest all season.

State volleyball: A closer look at the C-1 bracket, where a pair of 32-0 teams look for perfection

All eight teams have won at least 20 matches this season, making Class C-1 perhaps the most competitive of the six brackets this week.

State volleyball: A closer look at the B bracket, where Omaha Skutt takes aim at history

The SkyHawks can match a state record with a sixth consecutive title, but there are teams in Class B that shouldn't be counted out.

State volleyball: A closer look at the A bracket where anything can happen (Just ask Papio South)

Last year's run by the Titans laid the foundation for the notion that anything can happen in Class A. The regular season confirmed that.

Continuing a long legacy of state tournament appearances for Northwest had a bumpy start thanks to COVID-19.

Diller-Odell’s Addison Heidemann reacts after a score during the third set as the Diller-Odell Lady Griffins defeat the BDS Lady Eagles in the A Division championship of the MUDECAS Tournament on Sept. 17 in Odell.