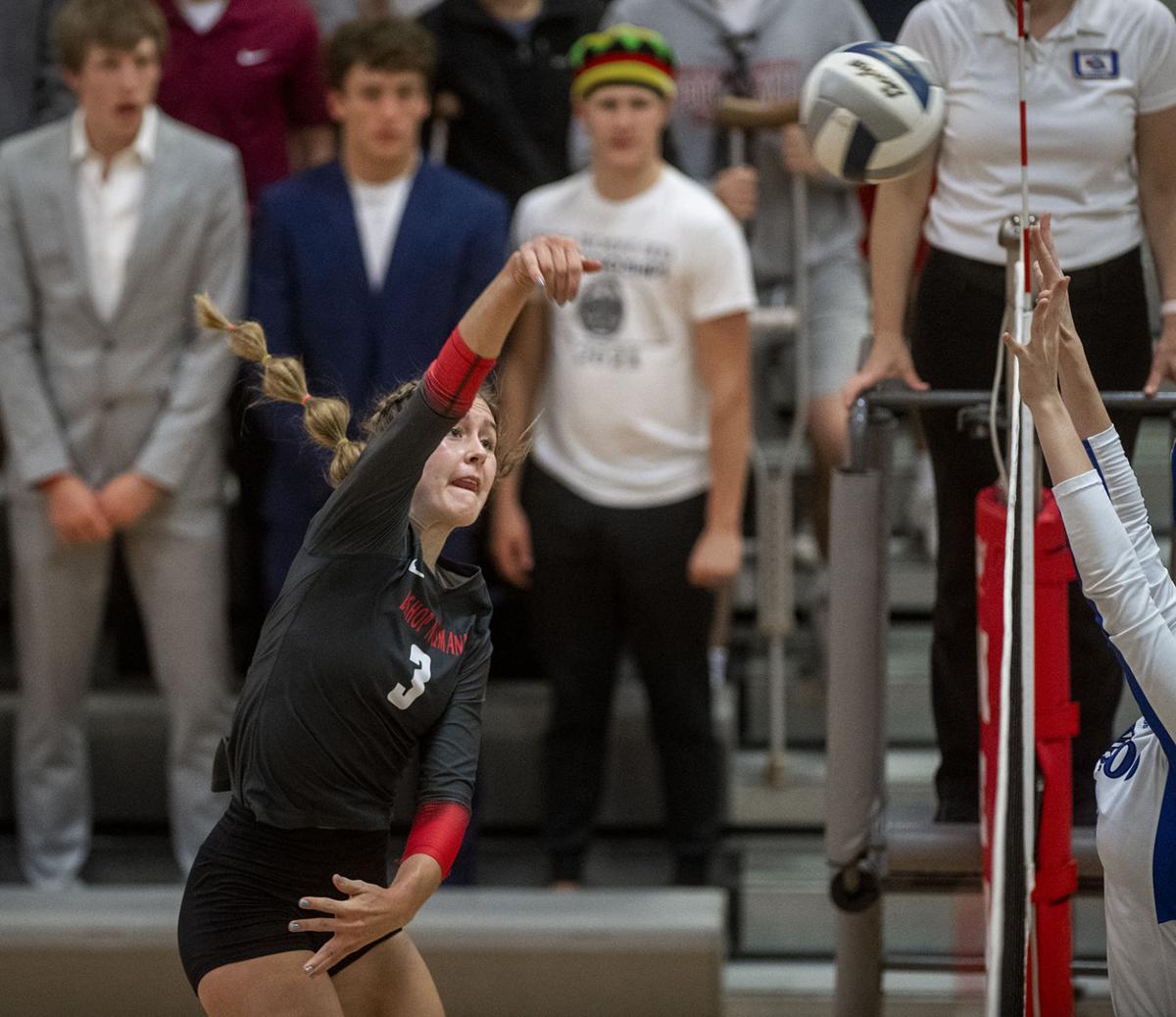 Bishop Neumann's Kali Jurgensmeier follows through on her set-winning kill against Wahoo on Tuesday, Oct. 26, during the C1-5 subdistrict final at Bishop Neumann. 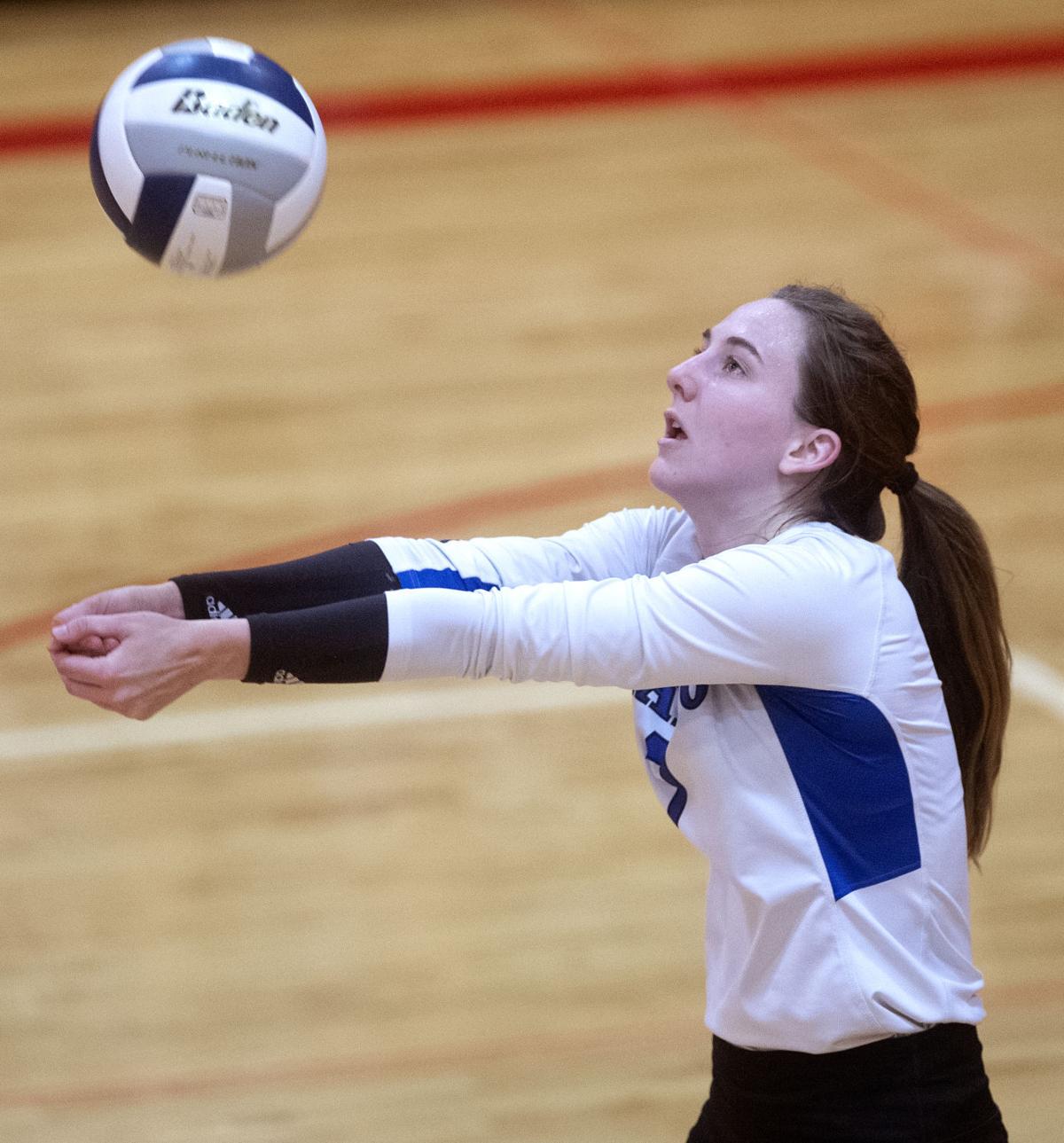 WAHOO — Win or lose on this night, Bishop Neumann was guaranteed a spot in Saturday’s district finals.

Yet, there was so much to play for.

For starters, the Class C-1 No. 2 Cavaliers wanted to keep the momentum rolling. They had a shot at win No. 27.

They also wanted another shot at crosstown rival Wahoo, a team that has had Bishop Neumann’s number in recent postseasons. Victories by both teams Monday set the stage Tuesday night at Neumann High School.

Yes, Neumann was ready for another shot at the No. 6 Warriors.

The Cavaliers jumped at the chance and won 25-21, 25-18, 25-19 in the C1-5 subdistrict final. But instead of a big celebration, the Cavaliers and Warriors showed why their bonds as friends and as a community are stronger than any feud or rivalry.

Moments after the final point, every Neumann player and coach lined up to hug Wahoo’s Mya Larson, who was sitting on the bench, her knee wrapped in ice. Just moments earlier, the two-time first-team Super-State standout — and one of the most decorated players in school history — went down with a knee injury.

The injury occurred early in the third set after a Wahoo point. It was a heartbreaking moment for the Warriors, who saw their overwhelming leader go down. There was heartbreak on the other side of the net, too.

“It’s even tougher when I’ve done it myself,” Neumann senior Kali Jurgensmeier said. “I’ve blown out my knee before. I just saw her go down and my heart just sunk.

Class A district volleyball glance: Pius X convincing in sweep, which sets up No. 8 vs. No. 9 final

“She’s one of my best friends, so I needed to be there for her because I knew exactly what she was going through.”

Larson recently surpassed 2,000 career kills and she plays club ball with some of the Neumann players. And in Wahoo, all the kids know each other well.

“She’s a four-year starter, so we all know her, and to have somebody with her caliber of play to go down like that, it’s tough to watch,” said Neumann coach Brandi Sladky, fighting back tears.

Tuesday’s match featured two of the state’s top players in Larson, a Montana State recruit, and Jurgensmeier, an Omaha recruit.

Both will be signing with their respective colleges in the coming days, but before that, they put on a show.

In the first set alone, the two combined for 19 kills. Larson had 22 kills before her injury and was keeping Wahoo in the match.

After a back-and-forth first set, Neumann (27-6) took control of the match behind a strong serve game.

“Our serving was phenomenal tonight and it’s been really good for the past few weeks,” said Jurgensmeier, who had multiple aces and finished with 17 kills. “We’ve really turned that up, and I think that changes the game when the teams are out of system.”

Neumann got the best of Wahoo after coming up short in recent postseason matchups. Wahoo ended Neumann’s season last year in subdistrict play, and two years earlier, the Warriors beat the Cavaliers in subdistricts and in the state semifinals.

“There’s a lot of history with us and Wahoo in recent years and they’ve come out on top in recent years, so we knew that had to be going through their minds a little bit, but I thought we came out pretty focused and focused on our side of the court to make plays and terminate balls,” she said.

Wahoo, the defending state champion, saw its season come to a close at 23-10. Eight of the 10 defeats came against ranked opponents. The Warriors were seeking their fourth straight trip to state.

Here's a look at what stood out from the third day of postseason volleyball.

'This one's a big one:' Papio reloads for another state tourney run, outlasts Thunderbolts in four

Despite having to replace most of their firepower from a year ago, the Monarchs are headed back to the state tournament for a 10th straight year.

Saturday's district volleyball pairings are set. Here's a look at the schedule

The volleyball district finals are Saturday across the state. The winners advance to next weeks' state tournament in Lincoln.

Bishop Neumann's Kali Jurgensmeier follows through on her set-winning kill against Wahoo on Tuesday, Oct. 26, during the C1-5 subdistrict final at Bishop Neumann.