The list of the best stories in volleyball in Nebraska during 2020 isn’t as long as most years.

The biggest team in the state, Nebraska, didn’t play a match in 2020 due to the coronavirus pandemic. The Huskers haven’t played in about 12½ months (Dec. 14, 2019). Most of the college volleyball season was postponed until the spring semester.

The Olympics were scheduled for 2020, but that also was postponed. A couple of former Huskers probably would have played for Team USA, including the state’s most famous player, Jordan Larson.

Super-State volleyball: Krause's analytical approach to volleyball puts the Omaha Skutt standout in a class of her own

So it was high school volleyball that got the most attention in 2020, and the top volleyball coach in the state, John Cook, was watching — socially distant style, of course.

“To me, I think the big news for volleyball in Nebraska is that two Nebraska teams are ranked in the top 10 in the country,” said the Nebraska head coach. “That’s a huge deal. And the fact that the high school season was able to pull it off (playing during a pandemic).”

Omaha Skutt won the Class B state championship — its sixth consecutive state title — and finished with a 35-1 record.

Elkhorn South won the Class A championship and was 30-1.

“Two teams being ranked in the top 10 is pretty impressive, and the level of play was ridiculous,” Cook said.

Lovejoy High School in Lucas, Texas, is ranked No. 1 in the poll. The team finished with a 26-0 record in the state’s second-largest class. Lovejoy only lost two sets all season.

In the most recent USA Today national poll, Skutt is No. 2, and Elkhorn South 13th.

Usually, when the state volleyball tournament takes place, the Huskers are playing and hit the road that weekend so that the high school teams can play the championship matches at the Devaney Sports Center. Cook tries to watch a few matches during the first day of the tournament.

But with Nebraska’s season on hold, Cook was just like other fans of volleyball in Nebraska and watched parts of the six state championship matches on TV on NET.

“The level of play was off the chart. I was so impressed,” said Cook, who got his start in the sport as a high school coach in San Diego.

Cook was also impressed how Pinnacle Bank Arena made changes to be able to host the tournament, and that the city has purchased the same Taraflex courts the Huskers use for the arena.

Cook closely watched Omaha Skutt, which had Lindsay Krause. The 6-foot-4 outside hitter will join the Huskers this summer for the fall 2021 season.

“That’s a special high school team right there,” said Cook of Skutt. “That’s a team that will go down as one of the best high school teams in the state, along with Papillion-La Vista and Lincoln East way back. (Skutt was) fun to watch. They do some great things. We were talking about it the other day, and it’s like watching a college team.”

At least 23 players committed to NCAA Division I programs played in the Nebraska state tournament, with 11 teams having at least one Division I recruit.

And while the Huskers didn’t play a match in 2020, the program did help its chances of having success in years to come by signing a six-player recruiting class that is No. 1 in the nation, according to Prepvolleyball.com. The Huskers signed the No. 1, 2 and 3 players in the class, and got the top player in the class at three positions (outside hitter, setter and libero).

Norah Sis from Papillion-La Vista (Creighton recruit) also was chosen for the first team. Husker recruits Lexi Rodriguez and Whitney Lauenstein were second-team All-Americans. Elle Glock from Wahoo also made the second team, and Allison Gray made the third team.

Ad campaign: Krause ended a dominant high school career with her fourth consecutive state championship, and 2020 may have been her finest season at Omaha Skutt. She led the state in both hitting percentage (.475) and aces (88) on top of career-highs in kills and digs. Krause was a first-team Super-State selection four years in a row, and she captains the 2020 squad.

“When those bright lights go on and the eyes are on her, she’s 100 times better. She’s someone that the kids look up to, especially if she’s working camps. She’s a role model for the kids.”

Ad campaign: Sis topped 500 kills in a season for a second time at the high school level, and she ends her Monarch career with 1,910 terminations. Papillion-La Vista won at least 20 matches and qualified for the state tournament in each of her four seasons, and a college career at Creighton is up next for Sis.

“She's probably the hardest-working player I've coached. She puts in the time on and off the court to in an effort to be the best. She's been such a pleasure to coach and is going to be missed.”

Ad campaign: Larson may not have reached the 600-kill mark she did a year ago, but her 532 kills were still the second-most in the state this season. Her 41-kill performance in the Class C-1 title game was integral to Wahoo claiming the state title in five sets, and the junior recently announced her commitment to Montana State.

“She sees the court well has a lot of effective shots in her toolbox. Mya has a lot of focus and drive to become the best version of herself, and with this mindset, I feel like she will always continue to grow.”

Ad campaign: While some players are ready for the varsity level immediately, Lauenstein didn’t make the jump until her sophomore year. She had 400 or more kills three seasons in a row while leading Waverly to the state tournament at each opportunity. A talented back-row player as well, Lauenstein is headed to Nebraska next year.

“I think she is the poster child for work ethic and dreaming big. She is the kid who didn't get the varsity jersey as a freshman and it really devastated her. She really sees the correlation between hard work and attaining lofty goals.”

Ad campaign: A true force at middle blocker, Gray closed her high school career by leading Elkhorn South to its first state title in school history. Gray set a new career high in hitting percentage while topping 300 kills for the fourth straight year, and another stellar blocking season brought her career total to 476.

“Rylee has developed a sense of being aggressive at the net both while attacking on blocking. That mentality, along with her dedication to getting stronger, has allowed her to become dominant in those facets of the game.”

Ad campaign: A three-year starter at setter, Gray’s steady hand running the offense has allowed hitters such as Krause to shine. Her 1,023 assists were second-most in the state this season, and Gray also set a new career-best with only 12 ball-handling errors as she makes back-to-back appearances on the Super-State first team.

“She could literally be going backwards off the court and set a perfect ball 30-40 feet away because of her work off the court. She developed great relationships with our players, but she also earned their trust and respect, and that made her an awesome leader for us.”

Ad campaign: After beginning her high school career as a hitter, a move to setter resulted in three straight 1,000-assist seasons. Her four-year starting career includes three state championships, and Glock holds the Class C-1 record for the most assists in a season (1,167).

"She is a very poised player who doesn’t get rattled, and that kind of personality rubs off on the team. Elle is not only athletic, but also an extremely hard worker who will do really well at the next level.”

An argument could be made that the match will feature the best collection of talent in recent memory.

A look at the top volleyball players from around the state in 2020.

Elkhorn South may be the newest program in Class A, but the Storm have quickly found an identity for themselves.

The Nebraska women's gymnastics team will host four meets and the men three in a conference-only schedule in 2021.

Lexi Rodriguez admits she didn't even know how to keep score of a tennis match. But, with volleyball postponed, she became accomplished with a racquet.

Mississippi was the first Division I school to offer Shayla Meyer a volleyball scholarship.

Husker players are anxious to get the volleyball season started, but there's a lot of uncertainty about how things will go while trying to play during a pandemic.

Trish Larson, who built Wahoo into a state volleyball power, stepping down after 'grateful' run as coach

Larson said the decision to step down was not easy. "I am at the stage of my life where I would like to lighten the load a little bit," Larson said.

The Husker recruit was named the Journal Star's Super-State honorary captain and also was named the fall player of the year by VolleyballMag.com. 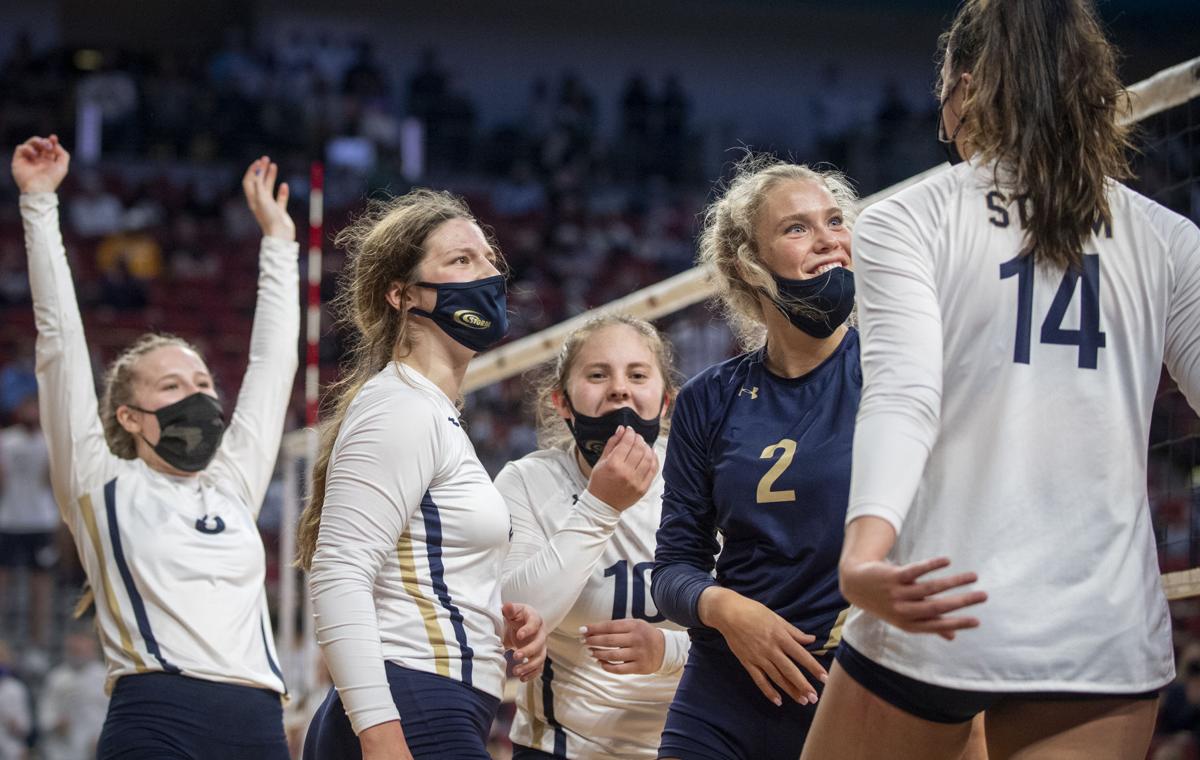 Elkhorn South's Rylee Gray (14) was the center of attention after she helped lead the Storm to the state championship match with a five-set win against Papillion-La Vista in November. Elkhorn South won the Class A state title, had a 30-1 record and finished No. 8 in the national rankings. 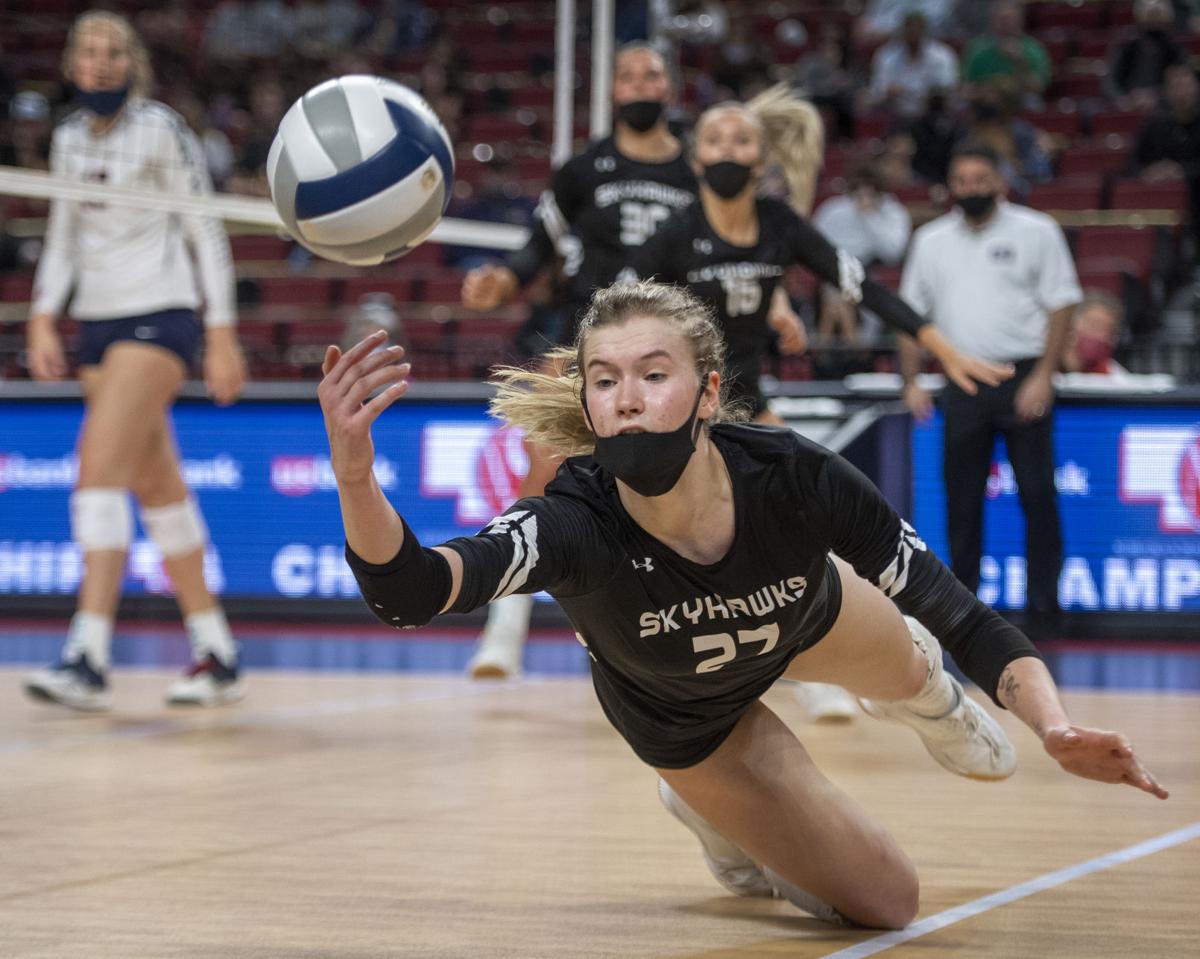 Omaha Skutt's Lindsay Krause (27) dives for a kill by Norris' Ella Waters in the third set in the Class B final at the state volleyball tournament Nov. 7 at Pinnacle Bank Arena.