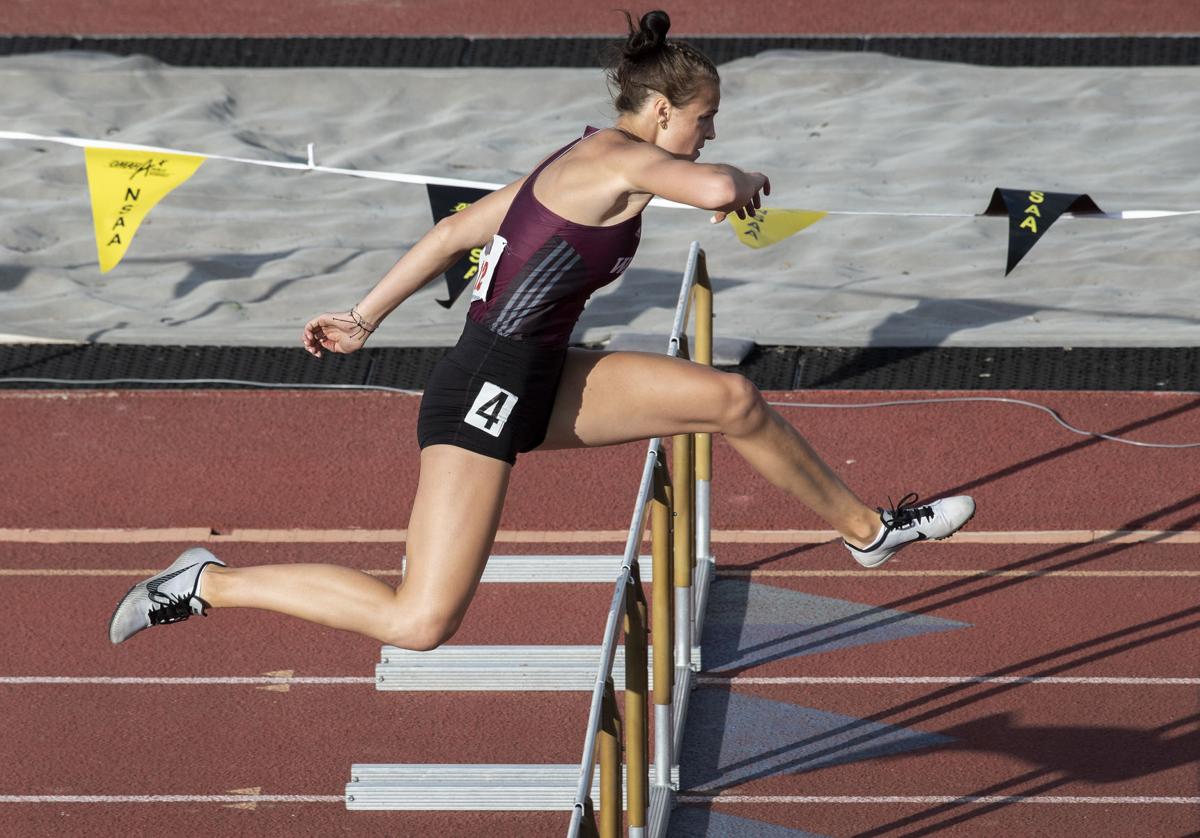 Waverly's Whitney Lauenstein leaps over the final hurdle en route to a win in her heat of the 300-meter low hurdles during the Class B state track and field meet Friday at Burke Stadium in Omaha. 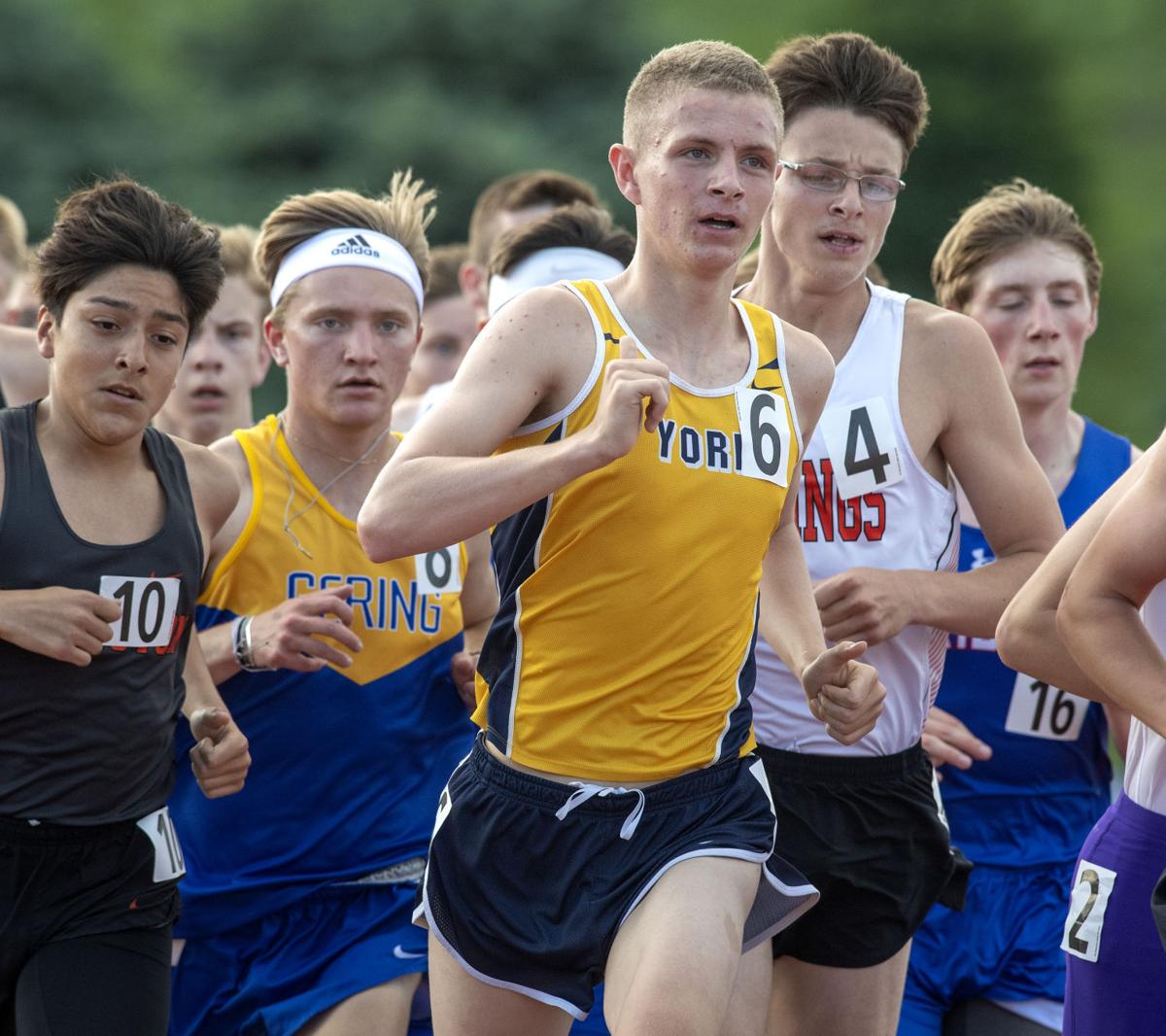 York's Colin Pinneo (6) runs in the boys 3,200 during the Class B state track and field meet Friday at Burke Stadium in Omaha.

OMAHA — Melanie Driewer has been pole vaulting since seventh grade. The York junior saw her perseverance finally pay off in the form of a Class B gold medal Friday at the state track and field championships at Omaha Burke Stadium.

Driewer cleared a personal-best 11 feet on her third attempt to nail down the title. She was close on her final two jumps at 11-4, but was unable to move her PR up.

Her best coming into the 2021 campaign was 8-6, “and it’s crazy how much better I got,” said Driewer, who had gone 10-9 earlier in the season. “There were meets I was improving my PR by a foot-and-a-half. To be able to PR and win state, it’s a little overwhelming.”

Driewer was a gymnast in elementary school, but when she went to her first track practice as a seventh grader, “I looked over at the high schoolers doing it (the pole vault), and I thought that would be something kind of cool to do,” she said.

It was a struggle the first two years.

“My freshman year was not very good,” Driewer admitted. “I had a lot of mental blocks and never really got going. I didn’t have a PR all year.”

Her sophomore year was canceled because of COVID-19, but other health issues would’ve been a factor had there been a season as she spent a week in the hospital last spring after complications from an appendicitis.

“Not having a season allowed me more time to regain my strength instead of trying to come back too soon,” Driewer said.

In other area performances of note, Ashland-Greenwood junior hurdler Evan Shepard matched his Class B-leading time of :14.77 in the boys 110 high hurdles.

Nebraska volleyball recruit Whitney Lauenstein of Waverly ran the fastest time in B this season in the girls 300 low hurdles with her :44.78. Arlington junior Kailynn Gubbels has the eighth-fastest electronic time in state history in the 100 hurdles with the :14.52 at districts, and she came close to that mark Friday with a :14.54 as three hurdlers also broke the 15-second mark in the preliminaries.

Falls City’s RaeAnn Thompson recorded the fastest preliminary time in the girls 100 with a :12.15, matching her PR from earlier in the season.

Aurora junior Gage Griffith took the boys discus title over fellow Central Conference rival Trey Dickey as both registered PRs in the final meet of the season. Griffith won with a 174-8, while Dickey’s runner-up throw was 170-4.

Sidney leads a tightly packed boys team race after the first day with 19 points, one more than second-place Hastings. Aurora and Norris are third and fourth with 15 and 14 points, respectively.

Photos: Classes B and C join the fold at the state track and field meet

State track: Southern's Connor Bradley doesn't have a track to practice on. It hasn't slowed down the gold-medal hopeful

Bradley practices on a makeshift oval made of crushed rock around the football field — "Sometimes if it rains you have to go run in the parking lot."

State track: Your quick guide to highlights, videos and photos from Classes A and D

We know, there's been a lot going on in the high school sports scene lately. Need to catch up on state track? You're in the right spot.

OMAHA — The pack mentality, paced by the lead runner Brynn Hirschfeld, set the York girls track team apart from the rest of the Class B field …

State track notes: It was well worth the wait for Arlington's Gubbels; Lauenstein turns focus to Huskers

“I looked up at the big screen a few times to see where he was at. I saw he was right on my tail, so I just gave it all I had.”

Here's a look at the season's top performances after the state meet.

Here's a look at the season's top performances after the state meet.

Waverly's Whitney Lauenstein leaps over the final hurdle en route to a win in her heat of the 300-meter low hurdles during the Class B state track and field meet Friday at Burke Stadium in Omaha.

York's Colin Pinneo (6) runs in the boys 3,200 during the Class B state track and field meet Friday at Burke Stadium in Omaha.