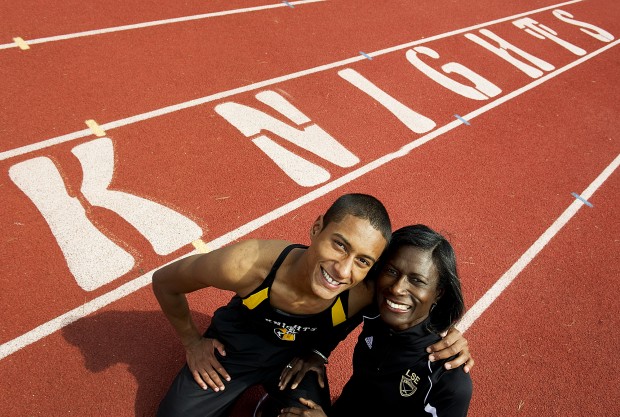 Carol Moravec was a seven-time NAIA outdoor national champion sprinter at Concordia and has coached track at Lincoln Southeast since 1994. Vincent Moravec runs sprints and hurdles, and he has the second-best triple jump -- 44 feet, 10¾ inches -- in the state this spring. (FRANCIS GARDLER / Lincoln Journal Star) 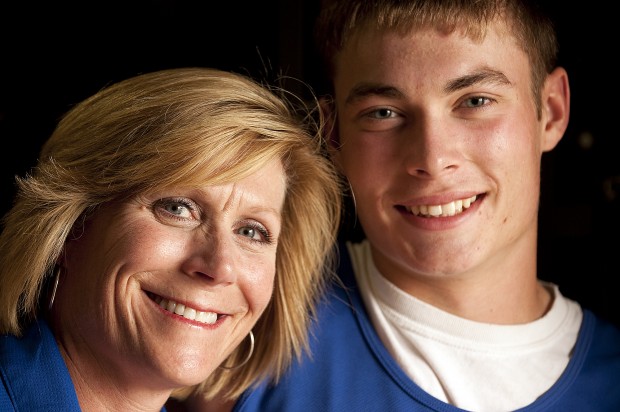 Julie Gipson, who coaches jumpers at Lincoln Christian, was a state champion at Tecumseh and went on to compete at Kearney State, where she was an indoor NAIA All-American in 1981. Levi Gipson enters the Class C boys state meet as the class leader in the long jump, 100, 200 and 400. (FRANCIS GARDLER / Lincoln Journal Star)
By RON POWELL / Lincoln Journal Star

Carol Moravec and Julie Gipson were both high school and college track standouts who are now sharing their knowledge and passion for the sport helping coach their sons.

Moravec has coached track at Lincoln Southeast since 1994. The former Journal Star girls prep coach of the year was head girls coach when the Knights won four straight Class A girls titles from 2000 to 2003, but she now specializes as a sprint and conditioning coach for both the boys and girls programs.

She now coaches the jumpers at Lincoln Christian.

It was at a ninth-grade track meet three years ago when Carol discovered her son was determined to follow in her footsteps. Growing up, Vincent played all the sports, eventually limiting it to football as a freshman, tennis as a sophomore and junior, and, of course, track.

"He told me at that meet that he liked track the best,'' she said, smiling. "Those were the best words I ever heard.''

Vincent grew up at the Southeast track. He was there a lot in the summer when Carol would work with Southeast athletes in all sports in the Knights' conditioning program.

"There were some hot days when I wished I wasn't there, but most of the time I liked coming to the track because there were other kids there to play with,'' Vincent said.

As he's gotten older, he's learned to appreciate his mother's track expertise and her ability to get everything possible out of each athlete.

"I look at her as both a mom and coach,'' said Vincent, an Academic All-Stater who's in his mom's physiology class this semester. "She knows how hard to push me, when I should keep going and when I need to back off.''

Vincent has been a sprinter, hurdler and long jumper most of his track career, but it took until a few weeks remaining in his senior season that he finally found his niche — the triple jump. He'd always resisted the event because of the toll it would have on his legs for the hurdles and sprints.

"My (jumps) coach (Ben Tegeler) forced me to do it,'' Vincent said. "The day before the LPS meet was the first time I'd tried it in practice.''

On his second attempt of the competition, Vincent popped a leap of 44 feet, 10¾ inches, the second-best in the state this spring.

"I got out of the pit and everyone gasped when they heard the distance,'' said Vincent, who's won triple jump gold medals at the LPS, Heartland Conference and district meets. "I had no idea if that was good or not because I'd never done it before.''

In the triple jump, Vincent doesn't experience the nervousness that haunts him before the sprints and hurdle races. "I get so nervous I get sick to my stomach,'' Vincent said. "For some reason, that doesn't happen to me in the triple jump.''

Vincent plans to attend Nebraska, major in mechanical engineering and walk on the track team to triple jump.

The Gipsons live just east of Seacrest Park and Lincoln East High School, and Julie would bring Levi and his older brother, Jacob, (who now plays basketball and tennis at Hastings College) over to throw the football around and play tennis and basketball on the courts when they were youngsters.

Before they headed home, however, Julie always brought the boys over to Stuart Stadium where the East track is. "I'd always make them (long) jump after we were done doing everything else,'' Julie said, laughing.

For Levi, however, track is just one of three sports he excels in. The 6-foot-4 Gipson was a Class C-2 basketball all-stater this past season, pacing the Crusaders to a state championship. After two years of playing tennis for Christian, Levi played football for the first time since middle school last fall and became a prime target as a wide receiver.

"I like basketball the best, but track is where my best opportunity is for college,'' Levi said. "I'd like to see what I can do if I can specialize on just one or two (track) events.''

Julie not only introduced Levi to the long jump, she also had some interesting techniques to work on his vertical jump.

"When he was younger, I'd make him jump up and touch the top of the door frame in the house,'' said Julie, who's an instructor at Madonna ProActive.

While longtime Christian assistant Rico Kotrous coaches Levi in the sprints, Julie works with her son in the long jump.

"When I tried to tell Levi something about sprints, that didn't go well,'' she said.

She has no problem getting his attention in the long jump.

"She's taught me the fundamentals; now it's just a matter of fine tuning things,'' Levi said. "Sometimes it comes down to running fast (down the runway) and jumping far.''

At state last year, Levi finished fourth in the long jump and 200, and third in the 400. Expectations, and the pressure that comes with them, are higher this season.

Breaking down the 2011 state track meet

A look at the teams to beat and athletes to watch at the 2011 state meet.

Carol Moravec was a seven-time NAIA outdoor national champion sprinter at Concordia and has coached track at Lincoln Southeast since 1994. Vincent Moravec runs sprints and hurdles, and he has the second-best triple jump -- 44 feet, 10¾ inches -- in the state this spring. (FRANCIS GARDLER / Lincoln Journal Star)

Julie Gipson, who coaches jumpers at Lincoln Christian, was a state champion at Tecumseh and went on to compete at Kearney State, where she was an indoor NAIA All-American in 1981. Levi Gipson enters the Class C boys state meet as the class leader in the long jump, 100, 200 and 400. (FRANCIS GARDLER / Lincoln Journal Star)
© Copyright 2022 The Lincoln Journal Star, PO Box 81869 Lincoln, NE | Terms of Use | Privacy Policy
Powered by BLOX Content Management System from TownNews.com.
You don't have any notifications.