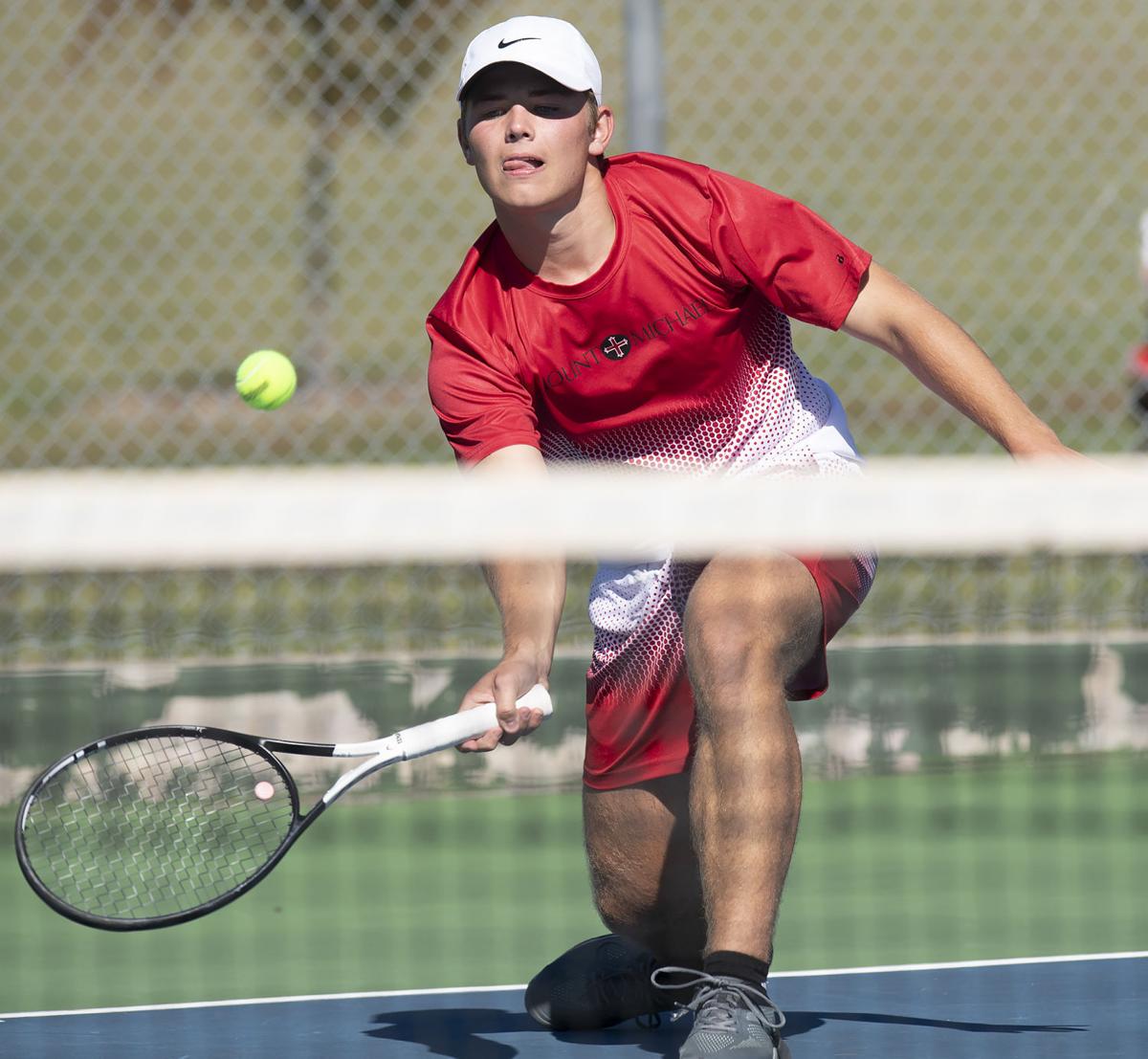 Mount Michael's Gavin Forster returns a ball in the Class B No. 1 singles championship match at the state tennis tournament Friday at Woods Tennis Center. 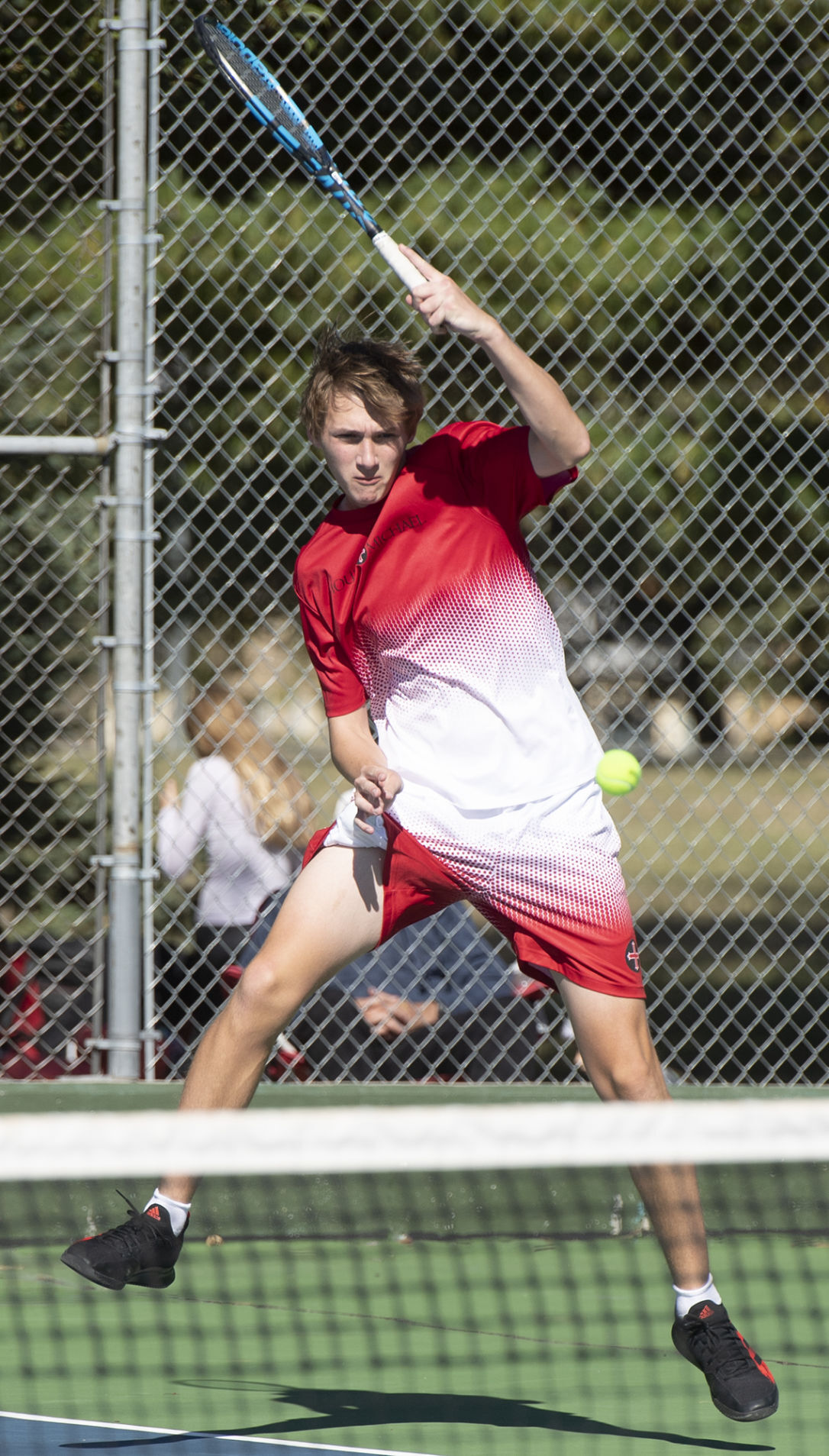 Mount Michael's William Mallissee hits a returns in the Class B No. 1 doubles championship match at the boys state tennis tournament Friday at Woods Tennis Center.

On Friday, those six seniors stepped up for the Knights at state. They all qualified for the finals and captured their second straight Class B state championship at Woods Tennis Center.

“It’s been a special year,” Petersen said. “They worked really hard in the offseason, and it showed today.”

One of those seniors was Gavin Forster. Forster battled from behind to defeat McCook’s Isaac Hinze in straight sets to win the title in No. 1 singles.

‘The support is how we win matches’: Lincoln East wins No. 1, No. 2 doubles as Spartans win first state title in boys tennis since 2007

Forster transferred to Mount Michael from Creighton Prep last year. He is just the second Knight to win in No. 1 singles in school history after Isaac Gart won in 2019 and 2020.

“He’s a fighter,” Peterson said. “He was an amazing transfer, but he fit in better than any transfer I have ever seen. The boys just took him in as part of the team, and coaching him was as easy as it gets.”

Forster took the first set but fell behind 3-2 in the second. He had no momentum going down into a crucial stretch of the match when something clicked.

“I told myself I had the wind switching sides and I was confident,” Forster said. “Coach told me to just hit the ball and hit my strokes, and it helped out.”

The No. 1 doubles pairing of Will Mallisee and Ethan Pental grinded out a back-and-forth third set to clinch their title run and the team title. The cherry on top of a dominant day for the Knights in Lincoln.

“We came out every invite, every meet, and did our best,” Forster said. “It was special for all of us to win this year, and we all came out here and poured our hearts out.”

Peterson harped on one thing before the finals matches picked up in the afternoon.

“Fight for every point and you are here for a team,” he said. “You should be proud of everything you have done this season.”

Mount Michael will see turnover next year, but it has a squad waiting to try and capture a third straight championship.

“In a perfect world (we keep winning),” Peterson said. “We are going to have a good team next year, but it will be different.”

Class B boys state tennis: Mount Michael is leading the way, but it has company at the top

Mount Michael sits at the top with 36 points. McCook and Omaha Skutt each have 34 points and Grand Island Central Catholic is fourth at 28.

Mount Michael's Gavin Forster returns a ball in the Class B No. 1 singles championship match at the state tennis tournament Friday at Woods Tennis Center.

Mount Michael's William Mallissee hits a returns in the Class B No. 1 doubles championship match at the boys state tennis tournament Friday at Woods Tennis Center.