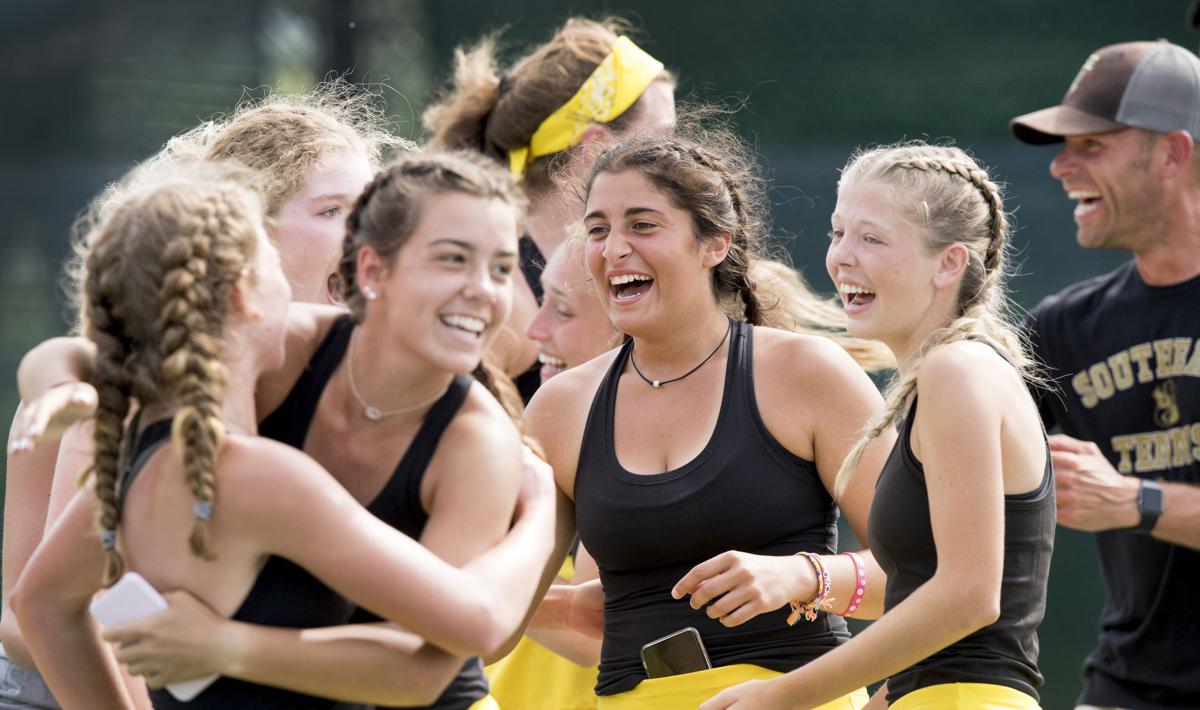 Lincoln Southeast tennis players celebrate after the win of teammates Katie Whitehead and Caroline Miller in the No. 1 girls doubles Class A championship over Millard North on May 17, 2019, at Koch Tennis Center. The win clinched the team championship for the Knights. 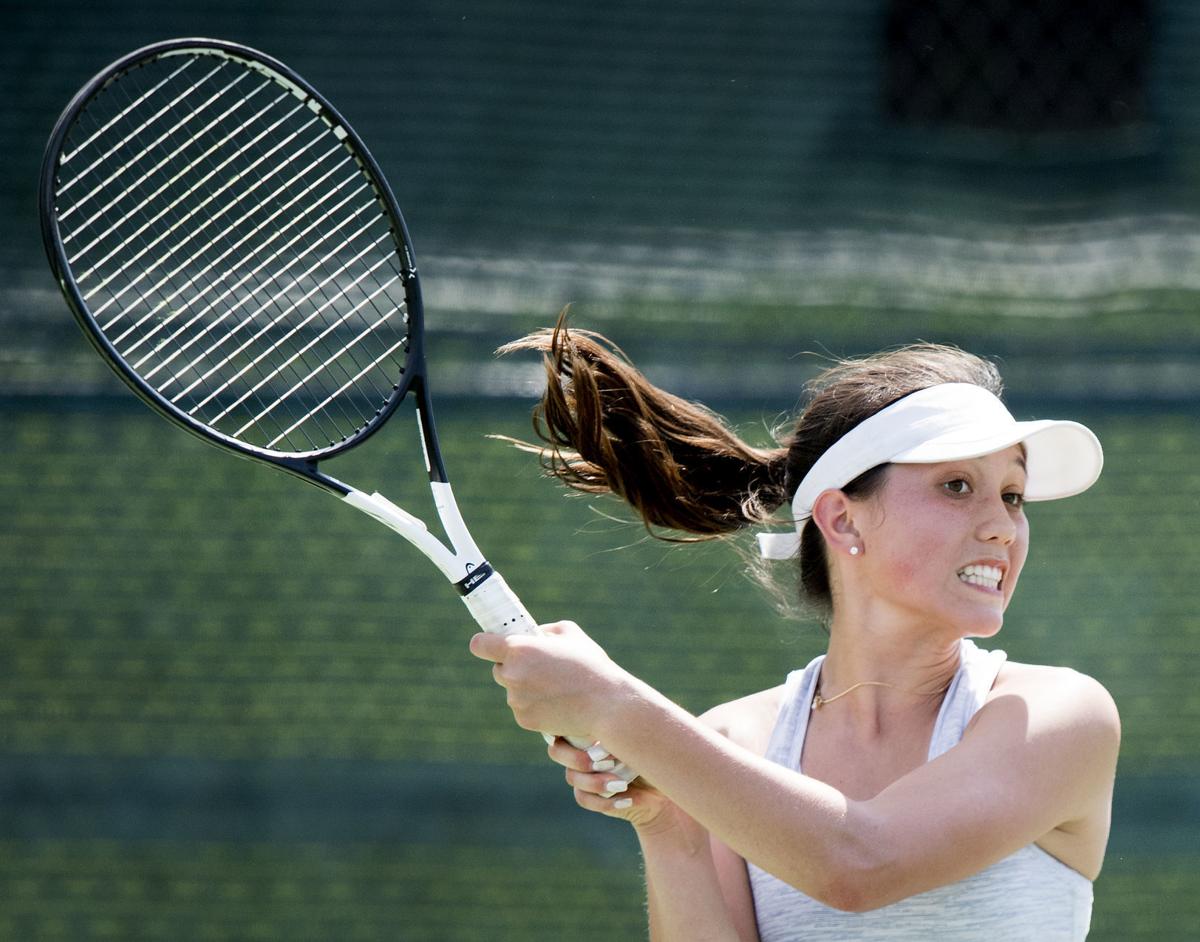 Lincoln East's Bianca Rademacher hits a shot on her way to the No. 1 singles title at the Class A girls state tennis tournament May 17 at Koch Tennis Center in Omaha.

OMAHA — Katie Whitehead and Caroline Miller had just completed a gut-wrenching, three-set win in the Class A No. 1 doubles state title match against Millard North’s Josie Friedman and Zoey Norris.

The happiness that came over the Lincoln Southeast duo couldn’t be outdone.

At least that's what they thought.

Right after the pair won the No. 1 doubles title, 6-1, 6-7 (5-7), 6-4, Southeast coach Chris Salem and the Knights team stormed the court to deliver some exciting news.

That title vaulted Southeast to 46½ team points and 1¼ points past Lincoln East for the Class A girls tennis team title, which is the fourth in school history and the first for Southeast since 2016.

“I thought I would be crying because this is my last season,” Whitehead said, “but I couldn’t be happier than I am right now. This is the best way to go out.”

Salem knew his top-ranked doubles team had the team championship on the line throughout the third set of the match, but he made sure not to tell them and keep them focused.

“When it’s time to play matches, we focus on the match at hand,” Salem said. “Then we discuss the team things. But, as you can see with all the girls running around, the team title means the most to this program. Southeast tennis is about the team titles and for this group of girls to be able to do it, I’m just over the moon.”

It wasn’t an easy walk to the title for the Knights, or for Whitehead and Miller.

The duo won the first set over Friedman and Norris easily, but dropped the second set and started to look a little tense.

“We just took some deep breaths, calmed down and took some breaths to recuperate,” Miller said. “We just had to think and go back to the basics. Make it textbook, make it cross-court, get the balls in and don’t go for anything fancy.”

The game plan worked, and Miller’s returns on the Mustangs' service games were a huge part in the win.

“Caroline can get in zones where she’s just a monster,” Salem said. “She’s a monster on serve and off the return. We got a little bit tight in the second set, but you could see when things mattered in the third set that these are two very special players.”

Salem said that this year’s title race shows how important every match is. Southeast had both of its doubles and singles teams in the semifinals, yet the team race was as tight as ever.

“We just knew we had more work to do,” Salem said.

The Knights got the work done.

Lincoln East did not make it easy, however.

The Spartans’ Bianca Rademacher won the No. 1 singles title, after losing in the finals last season to Elkhorn South’s Samantha Mannix.

“It’s so much more special now,” Rademacher said. “I feel so much more mature than I have in years past and I really felt like this was my time. I’ve worked hard and just adapted to every mistake that I’ve made.”

Rademacher took down Omaha Marian’s Julia King 6-1, 6-3 in the final.

East also got a title from Brooke Sailer at No. 2 singles, but it wasn’t enough to hold off the Knights.

Lincoln Pius X came in third in the team race with 35 points.

The Thunderbolts played in one state final, Gillian Carr and Laura Pfeifer in No. 2 doubles. The pair lost to Omaha Marian in straight sets.

A return to high school tennis, a broken racket, and for the first time since 1985, Omaha Duchesne can call itself the Class B girls tennis st…

A look at Thursday's results from Class A in Omaha and Class B in Lincoln.

OMAHA — Bianca Rademacher has been in big matches before.

A glance at the Class B girls tennis state tournament action from Thursday.

A look at Friday's results from Class A in Omaha and Class B in Lincoln.

A look at the top city performers  in girls tennis from the spring.

Lincoln Southeast seeks to defend its 2019 state championship. Others are looking to make some noise, too.

Lincoln Southeast tennis players celebrate after the win of teammates Katie Whitehead and Caroline Miller in the No. 1 girls doubles Class A championship over Millard North on May 17, 2019, at Koch Tennis Center. The win clinched the team championship for the Knights.

Lincoln East's Bianca Rademacher hits a shot on her way to the No. 1 singles title at the Class A girls state tennis tournament May 17 at Koch Tennis Center in Omaha.