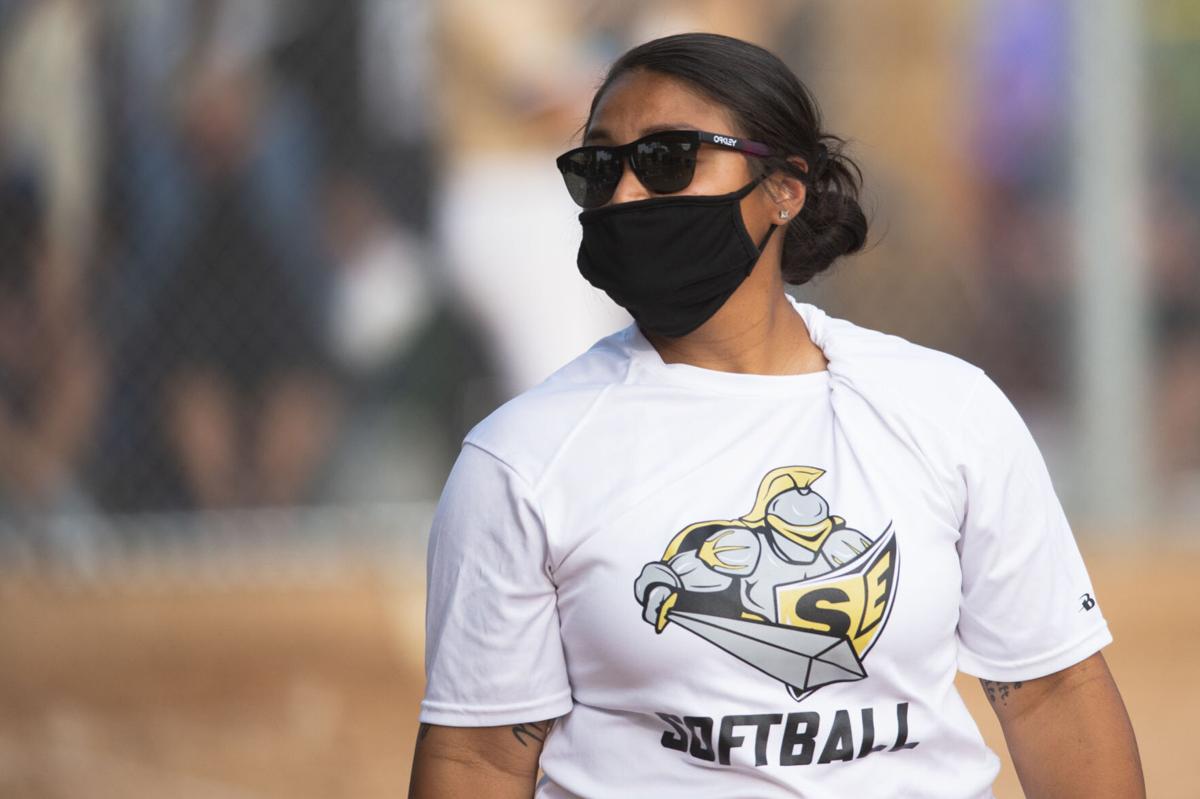 Lincoln Southeast assistant coach Bri Cassidy coaches at first base during a softball doubleheader against Lincoln Southwest at Doris Bair Complex on Sept. 14. 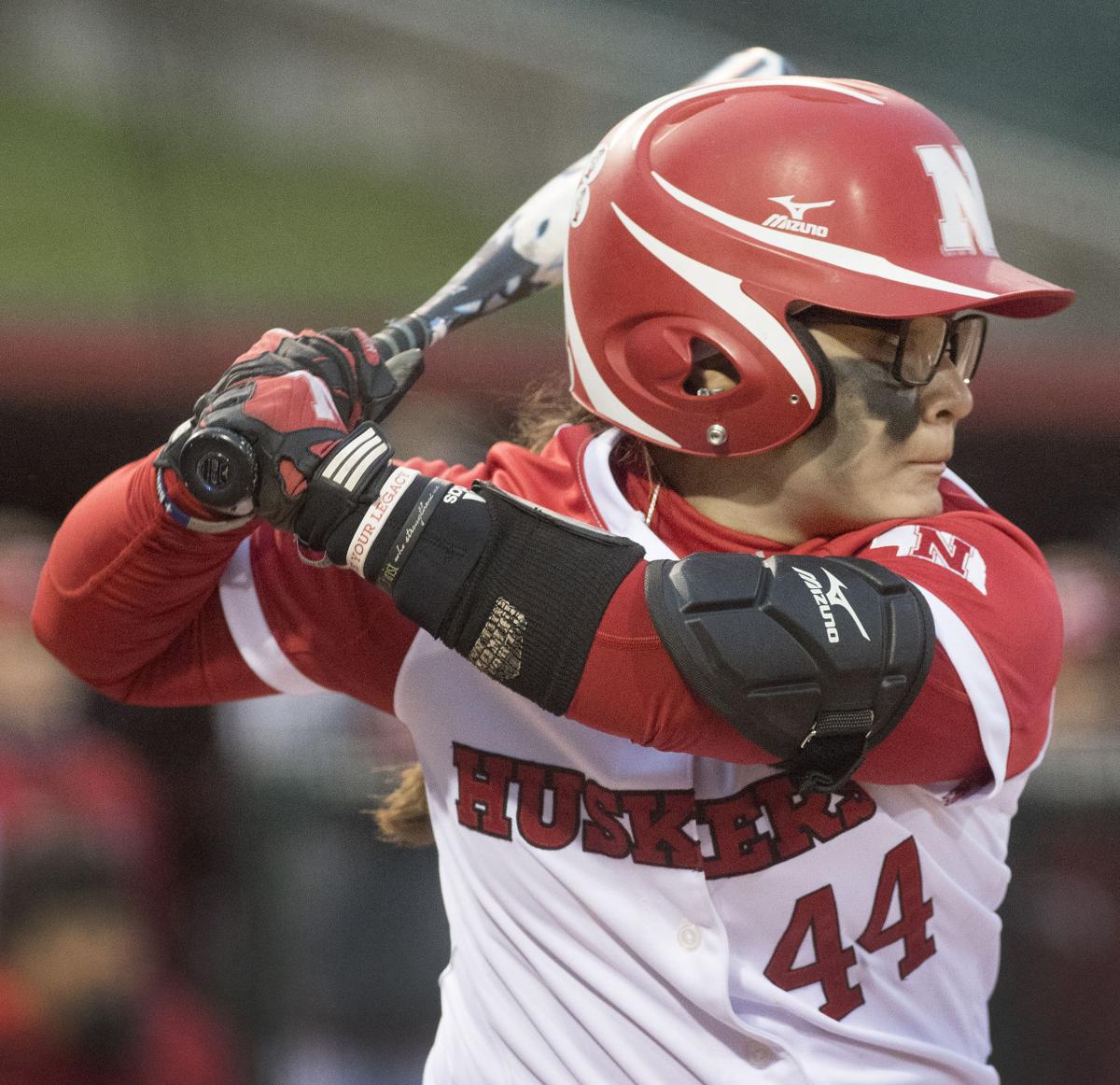 Nebraska's Bri Cassidy eyes a pitch during a 2017 game against Northwestern.

Bri Cassidy caught her final pitch in the spring of 2019, and for the first time in a long time, the former Nebraska catcher didn't have any softball commitments.

"It was the first summer that I didn't have softball since I was 10 years old," Cassidy said.

It didn't hit Cassidy until the fall when she watched the Nebraska softball team play a handful of exhibition games.

Prep Extra Credit, 9/17: A look at some of the top performances from around the state

Thanks to a text message from Toni Closner, Cassidy has renewed her softball fix. She's an assistant coach at Lincoln Southeast this fall.

Cassidy developed an interest in coaching during her first couple of years at Nebraska. But she never thought about coaching high school ball until Closner, Southeast's first-year head coach, reached out to her in the spring.

And Cassidy is thankful she did.

"I just love seeing the kids every day," Cassidy said. "I'm not there (at practice) all the time with school and work, so when I do get to see them, they're super-excited and it just makes me excited, just getting different texts from parents or messages from the kids.

"Just knowing that I've already had a chance to make an impact on their lives and their journey has been super-rewarding for me, and it definitely makes every day worth it."

Cassidy, who is from San Bernardino, California, earned her undergraduate degree in May of 2019, and has stayed in Lincoln to work on her master's degree. She's in a UNL College of Business program financed through the Big Ten — a two-year program that has her working in the Nebraska Athletic Department's life skills department this year.

When she's not in school or working with Husker athletes, Cassidy is at the ballfield, working with the Knights' pitchers and catchers, of course, while throwing bullpens. On gamedays, she can be spotted coaching first base.

"I love having her on staff," Closner said. "I think me and her kind of feed off of each other's energy. We're both younger and we both played the game, so I think we really mesh well. It's really nice being able to let her take the reins on calling some of our defensive plays and just letting her work with pitchers and catchers."

Cassidy had coached high school kids before, but in a limited form. She worked with kids at Husker softball camps and gave catching lessons. But she admits being a little nervous for the first day of practice in August.

The players, however, made her feel comfortable immediately.

And, yes, Cassidy loves to teach defense. What else would you expect from one of the greatest defensive catchers in Husker history?

It's an aspect Closner and Cassidy have preached to the team known for its offensive firepower, and it's playing a big part in the Class A No. 10 Knights hitting their stride. They're 13-8 and coming off a big doubleheader split with No. 3 Lincoln Southwest.

"That was honestly just what we needed right now," Closner said. "Our goal from the beginning from this summer has been to make the state tournament, and I think that it's easy to say it, but now that they went and beat and played very close with (Lincoln Southwest), now they know, 'Hey, we can not only go to state, we can go and compete for a state championship,' so I think that's really given them a boost of confidence that they needed right at the crucial point of the season."

Cassidy wants to make the most of it. She'll complete her master's degree in May, and while she would love to find a full-time position within the Nebraska Athletic Department, she could also be working elsewhere in the country by next summer.

"I think I'm almost living vicariously through them (the players)," Cassidy said. "It's really helped me feel the love for the game again and trying to inspire them by letting them feel what I feel for the game and trying to get them to feel the same way I think has definitely filled that bucket for me."

Softball insider: Seward's offense shines in tests against two of the best in Class C

MALCOLM — Seward took a break from Class B action to play a pair of Class C opponents Tuesday night.

The Silver Hawks and Knights combined to hammer 15 home runs over two games.

Norris softball's 10-year conference title drought was "a big motivation" in its run through the EMC tournament Saturday.

Prep glance: Class A No. 3 Bolts cruise in volleyball sweep of East

Thunderbolts get 13 kills from Kylen Sealock in home volleyball victory.

Softball Insider: With a little bit of swagger, No. 5 Neumann makes quick return to contender status in Class C

They Cavaliers are a year older and playing with a lot more confidence, according to their coach.

Lincoln East's emergence in Class A continues with shutout of No. 2 Omaha Marian in Westside Invite final

The Class A No. 5 Spartans put together a complete game offensively, defensively and in the circle to capture the Omaha Westside Invitational championship.

Solano is one of the Silver Hawks' top hitters this year. She's hitting .323 with 16 runs scored and 16 RBIs.

Lincoln Southeast assistant coach Bri Cassidy coaches at first base during a softball doubleheader against Lincoln Southwest at Doris Bair Complex on Sept. 14.

Nebraska's Bri Cassidy eyes a pitch during a 2017 game against Northwestern.