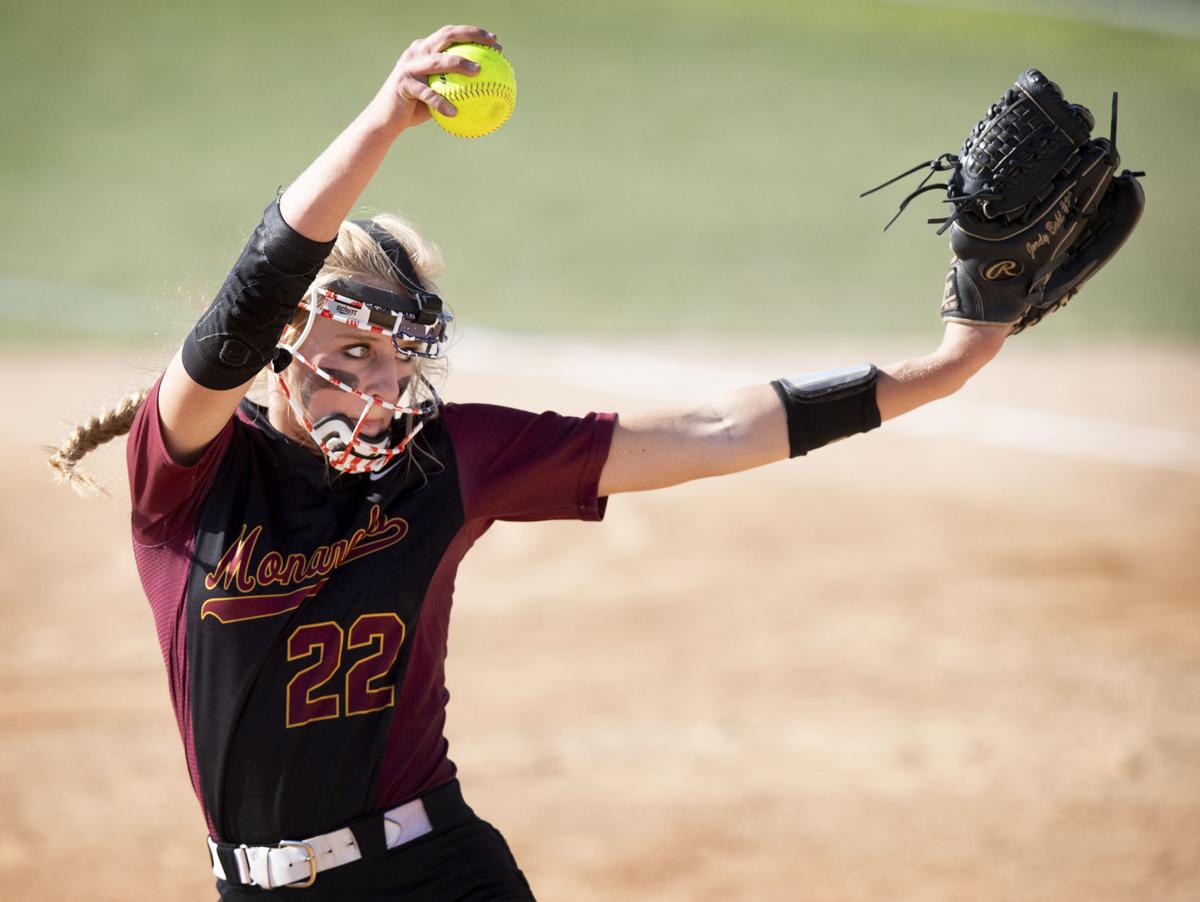 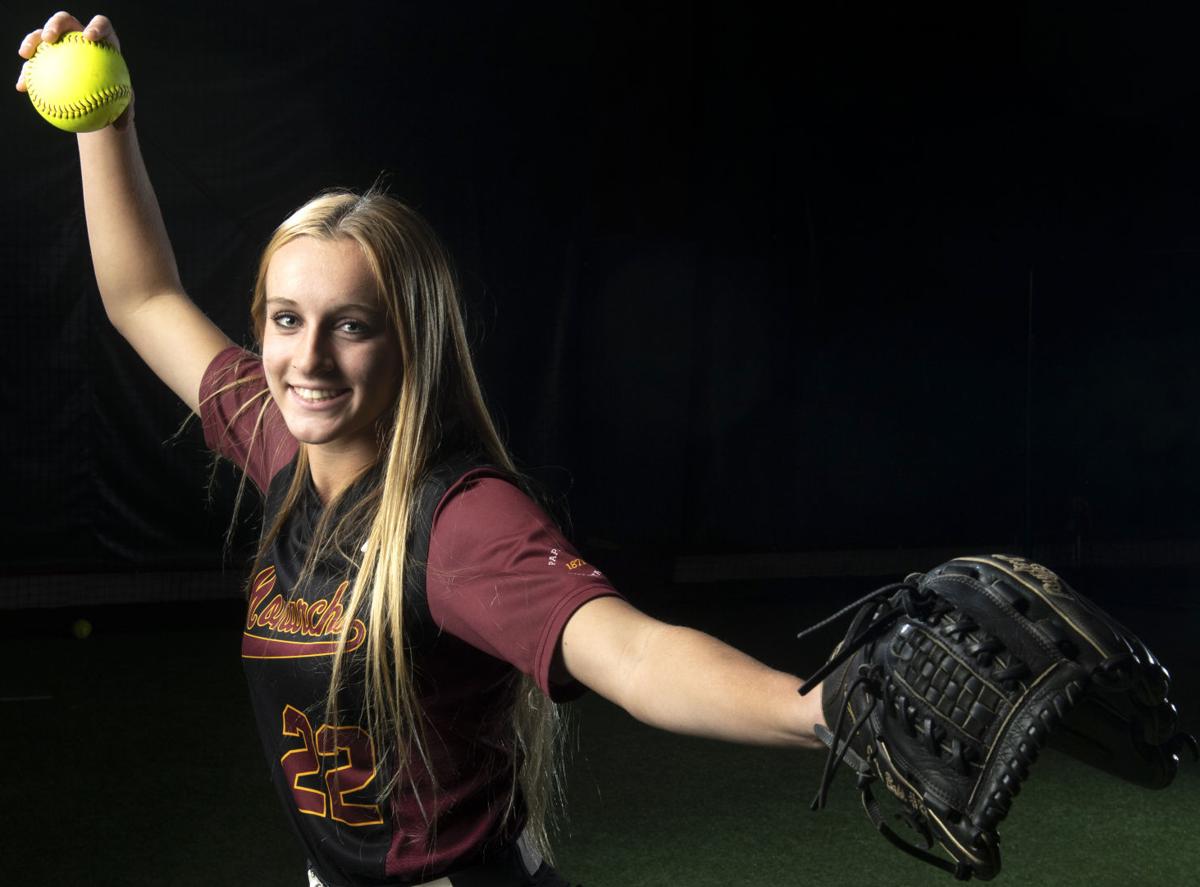 Papillion-La Vista junior Jordyn Bahl had a 0.15 earned-run average in the circle, and she hit 22 homers at the plate.

Jordyn Bahl did a little bit of everything growing up.

"At one point I wanted to quit softball and do gymnastics, but my parents wouldn't let me," Bahl said with a smile.

Mom and dad were on to something.

Some years later, the Papillion-La Vista standout would concoct a season that may very well stand on its own.

She allowed 27 hits. Twenty-six were singles.

She is the most-feared pitcher in the state.

But then Bahl became arguably the state's most-feared hitter in 2019. She hit .581 and tied a Class A single-season record with 22 homers. She reached base 63.4% of the time and drove in a Class A-leading 59 RBIs.

"It's got to be the most overall dominating season by any Nebraska high school player ever," Papillion-La Vista coach Todd Petersen said. "That's no disrespect to Peaches James, but I think if you take her offensive numbers and factor that in ...

"It was really fun to watch."

Said Lincoln Southwest coach Mark Watt, "It's the most complete season. She may be the best hitter in the state and she's definitely the best pitcher in the state."

James helped lead Papillion-La Vista to four state championships before enjoying an All-American career at Nebraska. James posted a 0.04 ERA during her 1999 prep season, surrendering only one run.

Terry Graver, the all-time winningest softball coach in Nebraska, said he sees a similar level of dominance from Bahl in a different era of softball.

"To do what she's doing this year and really even last year is pretty hard to do," Graver said of Bahl, noting the advancement in hitting. "It kind of tells you how good she really is."

Bahl allowed only one earned run — it was a homer off the bat of Gretna's Billie Andrews — during the regular season, and three overall. She threw three no-hitters in the state tournament in helping lead a determined bunch of Monarchs to a Class A championship.

There were more numbers that jump off the page. But to the humbled Bahl, one stood out above the rest.

"It was cool to have those stats as a player, but we're also the first team to go undefeated in Class A (history), so that's a cooler deal," said Bahl, whose season also included a commitment to college powerhouse Oklahoma. "My biggest concern was helping our team get the ultimate goal, which we fell short of (in 2018)."

Bahl played basketball her freshman year at Papio. Wanting to pursue some gigantic goals on the diamond, she turned her full focus to softball during the winter. Of course, Bahl, who has been clocked at 68-69 mph, wanted to hone her pitching craft. Her change-up became a tougher pitch to hit.

But Bahl also made sure to work on her swing. She worked closely with Papio assistant Dan Johnston, and it showed as the season progressed.

It was Bahl's extra work as a hitter that impressed Petersen.

"For her to take it and say, 'I'm going to take it to another level' is pretty impressive because it would be really easy to say, 'Well, let's just do pitching,'" Petersen said. "She wants to contribute in every way she can. That's how she's wired."

Bahl also was wired another way. After the Monarchs were upset by Lincoln Southwest in the 2018 state final, Bahl and her teammates were determined to not let it happen again.

So Bahl — known for her high motor in the circle — and the Monarchs approached every game like "a battle," she said during the state tournament.

Bahl, who has been part of two state championship teams, said the Monarchs are motivated to go after another. She's got bigger goals, too.

Bahl, ranked as one of the nation's top recruits for 2021, wants to help lead the Sooners to national championships, and more.

The ERAs are low. The dreams are high.

"Playing for the USA Team would be the coolest thing," she said. "My whole family is very patriotic. My grandpas and great-grandpas, they all served in the military.

"I think it would be awesome to represent America playing softball."

State softball wrapup: Bahl, Kniesche were determined to have big finishes; softball bonds are deeply rooted for many teams

HASTINGS — Sometimes it's hard to find the words to describe how a player performs on the big stage.

Meet the 2019 first-team softball Super-Staters, which includes seven juniors. Check out the full list of selections.

After helping lead Fairbury to a state title, Jaelle Johnson follows dreams and instincts to Omaha

It was quite an October for Jaelle Johnson.

For Papio's Brooke Dumont, South Dakota State is 'my home away from home'

After visiting South Dakota State this past weekend, Papio's Brooke Dumont called SDSU coaches on Monday evening to tell them of her intentions to join the Jackrabbit softball family.

The Nebraska softball team announced one of its biggest recruiting classes in recent memory.

For Mia Jarecki, her recent college commitment gave her the best of two worlds.

Papillion-La Vista junior Jordyn Bahl had a 0.15 earned-run average in the circle, and she hit 22 homers at the plate.