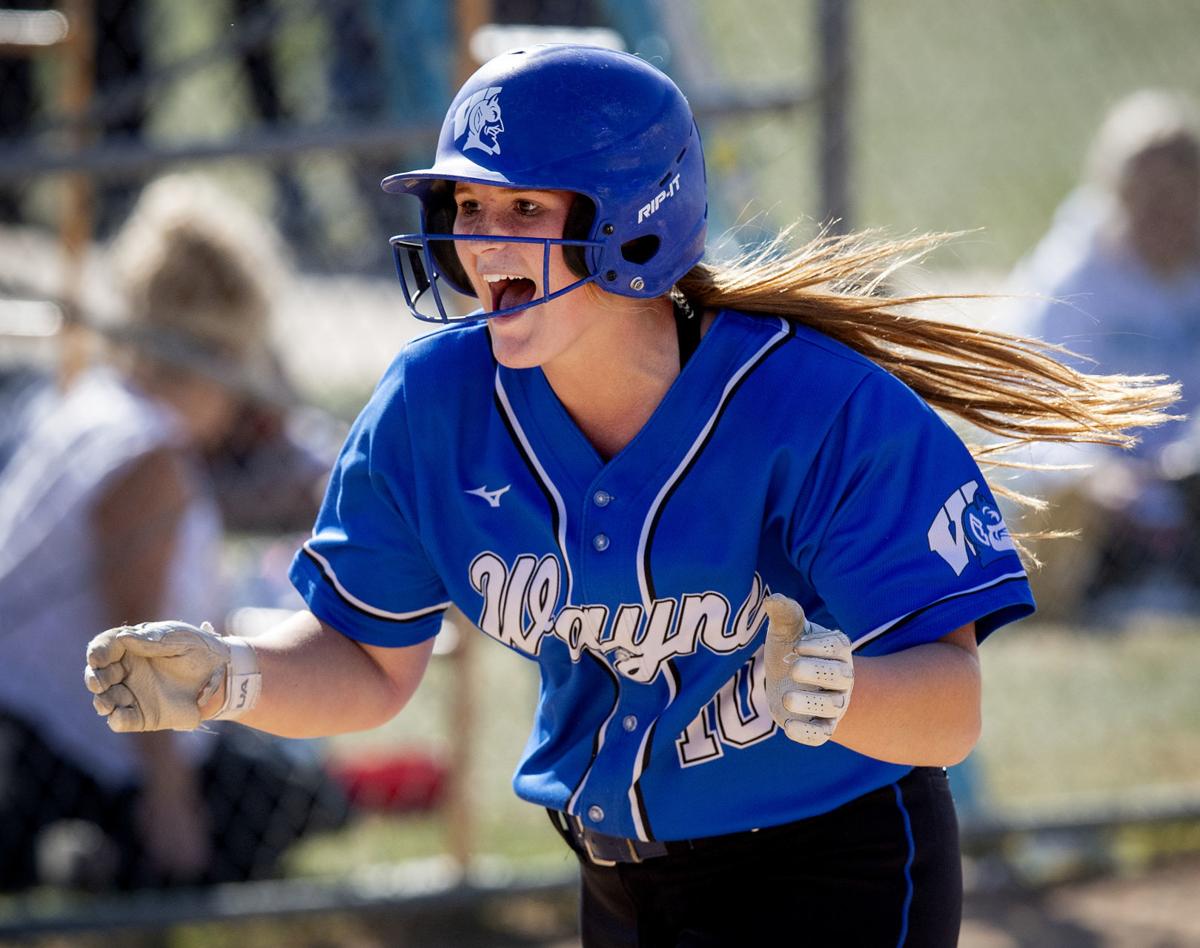 Wayne's Tori Kniesche celebrates as she heads home after connecting for her second homer of the game in the third inning against Beatrice during the Class B state softball finals at Bill Smith Complex in Hastings on Oct. 18. 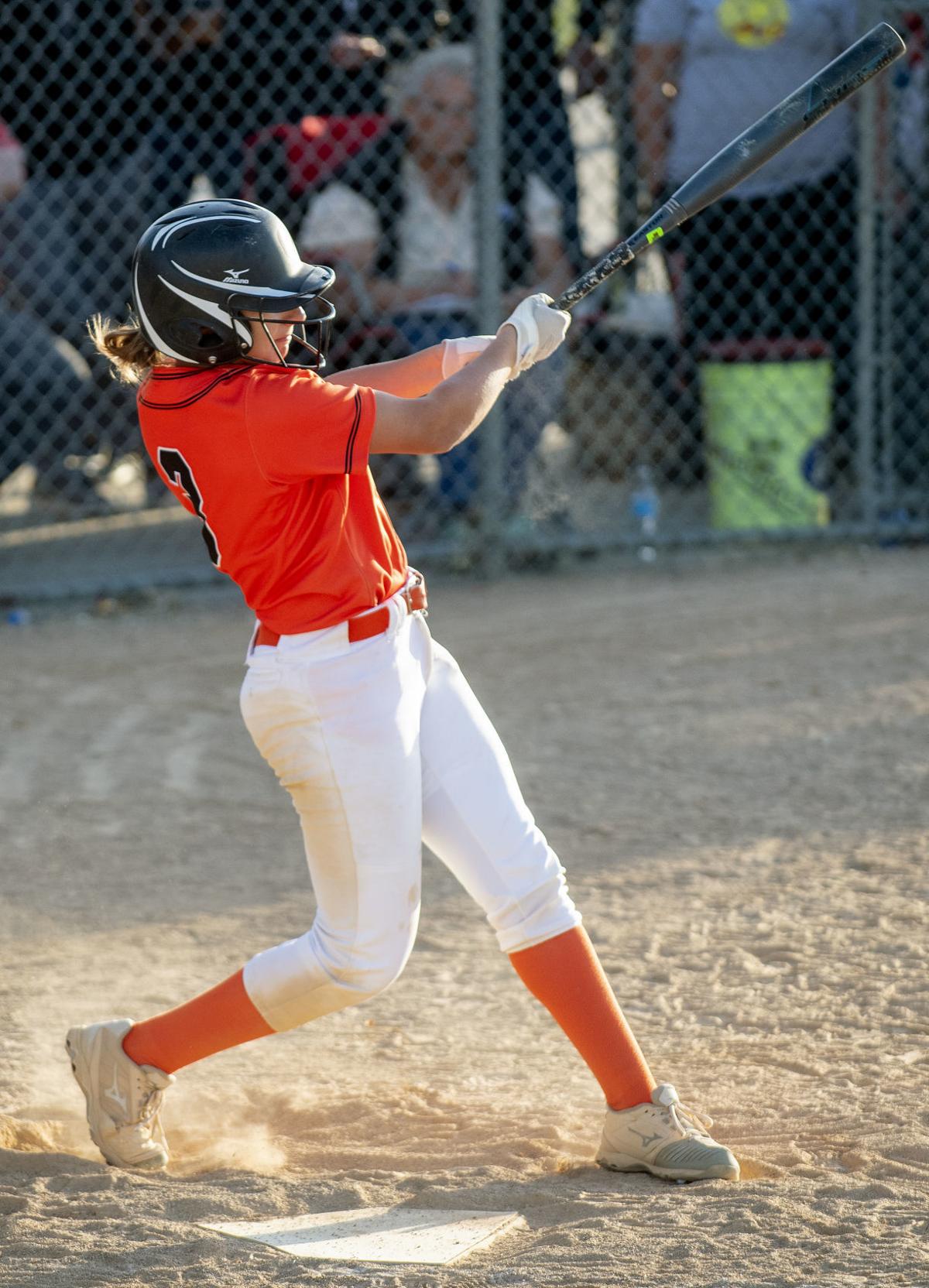 Beatrice hitter Olivia Aden connects for an RBI double to give the Lady Orange a 3-2 lead against Wayne on Friday during the Class B state softball championship in Hastings.

HASTINGS — The pitch was down and toward the knees, and maybe not her pitch to hit.

But Tori Kniesche wanted to make her final swing as a high school softball player a memorable one.

So with two outs remaining, she “dug in” and hit the ball square, sending a three-run shot well over the center-field fence, changing a seventh-inning, one-run deficit into a two-run lead and eventually lifting No. 6 Wayne to a 5-3 win against No. 2 Beatrice in the Class B state championship game Friday evening.

“I can’t even breathe right now, I’m so shocked,” said Kniesche, who also made a nice catch to turn a double play in the bottom of the seventh. “It’s just unbelievable.”

Kniesche’s blast punctuated a big day for the Blue Devils, who arrived at Bill Smith Complex needing to win three games, including two against Beatrice, if they wanted to hoist a state championship trophy.

The Blue Devils thought they had a chance because of Kniesche’s pitching ability. She's a shutdown pitcher. But the story Friday was Kniesche’s bat.

The South Dakota State recruit hit five home runs Friday, including two in Wayne’s 6-1 win against Beatrice and two more against the Lady Orange in the second game.

Between the two games, Kniesche was 4-for-6 at the plate with eight RBIs. She struck out 17 in the first Beatrice game and 10 more in the second.

Wayne (35-4) opened the day with a 9-1 win against Seward, which ended in six innings on a two-run shot by Kniesche.

“She just wanted it so bad,” Wayne coach Rob Sweetland said. “To come through … she was just seeing it, she was slinging it. Words can’t describe how awesome a day she had.

"She was just a total playmaker today."

Beatrice (32-6) intentionally walked Kniesche twice in the second game, forcing Wayne’s young hitters to come up with the big hits.

But with runners on first and second with one out in the top of the seventh, Beatrice -- clinging to a 3-2 lead -- pitched to Wayne’s best hitter.

One pitch is all it took to quickly flip the game.

Kniesche said she was surprised that she wasn’t intentionally walked.

“The next girls (in the lineup) have put the ball in play a little bit, squeeze play comes into play a little bit,” he said. “I really don’t like the intentional walk and not having to pitch to them, and I had confidence in (Beatrice pitcher Addison Barnard).

“Quite frankly, she threw a pitch there that really wasn’t a ... hittable ball. Tori just went down and got it and did a nice job. Great players make great plays.”

Barnard hit a leadoff homer in the first game to give Beatrice a 1-0 lead, but Kniesche allowed only one hit the rest of the way and Wayne, taking advantage of the wind blowing out, powered its way to a 6-1 victory to force a decisive game.

Kniesche, No. 2 in the lineup, hit a two-run shot in the first inning of the second game to give Wayne an early advantage, but Beatrice plated runs in the third, fourth and fifth innings to take the lead.

"Especially the senior group, but the team as a whole, they’re competitors," Lytle said of his team's ability to battle back. "They all understand that there’s seven innings in a game. You give up two runs in the first inning no matter who the pitcher is, you’re going to have opportunities to score runs.

"They did everything they could to win."

When the final out was made, Wayne completed quite possibly the most unique back-to-back state title run. The Blue Devils played in Class C last year and stormed to the state crown.

A reclassification had them in Class B this year, and Sweetland said he didn’t know if the team could compete against a very deep class.

“If you looked at our first practice (in August) compared to if you would have drove around to Skutt, or to Beatrice, or to Hastings or to Crete, you’d be like, ‘There’s no way we can compete with these teams,’” Sweetland said. “But they just kept getting better and I knew we had a Class B pitcher that could take us and keep us in games.”

Sweetland said the LPS Classic — Wayne went 0-3 against Lincoln Southwest, Elkhorn and Waverly — was an eye-opener for his young team, which had six sophomores and one freshman in the lineup Friday.

Kniesche recalls the team losing to Norfolk in a jamboree game, and then seeing a ton of growth.

“We came all the way from that scrimmage to the finish and it’s just unbelievable what we’ve accomplished,” said Kniesche, who earlier this season broke the Class B single-season record for strikeouts.

Sweetland said the young players followed Kniesche’s lead, and what followed was the school’s fourth state championship, and first in Class B.

“Going up to Class B, I never thought we’d be putting gold medals on,” Sweetland said. “To do it, that’s one banner that will go on the wall that a lot of people will be talking about for many years.”

Check out pairings for the state softball tournament.

HASTINGS -- Jordyn Bahl and her Papillion-La Vista teammates are on a mission.

HASTINGS -- The game had big implications. It had two big pitching performances.

HASTINGS -- Fairbury can bash the softball.

HASTINGS — A bum shoulder kept Raven DeFrain from pitching during the final half of the season.

Despite falling short, Seward writes its own story at state softball touranment

State softball wrapup: Bahl, Kniesche were determined to have big finishes; softball bonds are deeply rooted for many teams

HASTINGS — Sometimes it's hard to find the words to describe how a player performs on the big stage.

On Monday, Rylan Ewoldt announced her commitment to play softball for the Division I Broncos of Boise State. She also considered South Dakota State and Texas-San Antonio, which she visited this past weekend.

Wayne's Tori Kniesche celebrates as she heads home after connecting for her second homer of the game in the third inning against Beatrice during the Class B state softball finals at Bill Smith Complex in Hastings on Oct. 18.

Beatrice hitter Olivia Aden connects for an RBI double to give the Lady Orange a 3-2 lead against Wayne on Friday during the Class B state softball championship in Hastings.