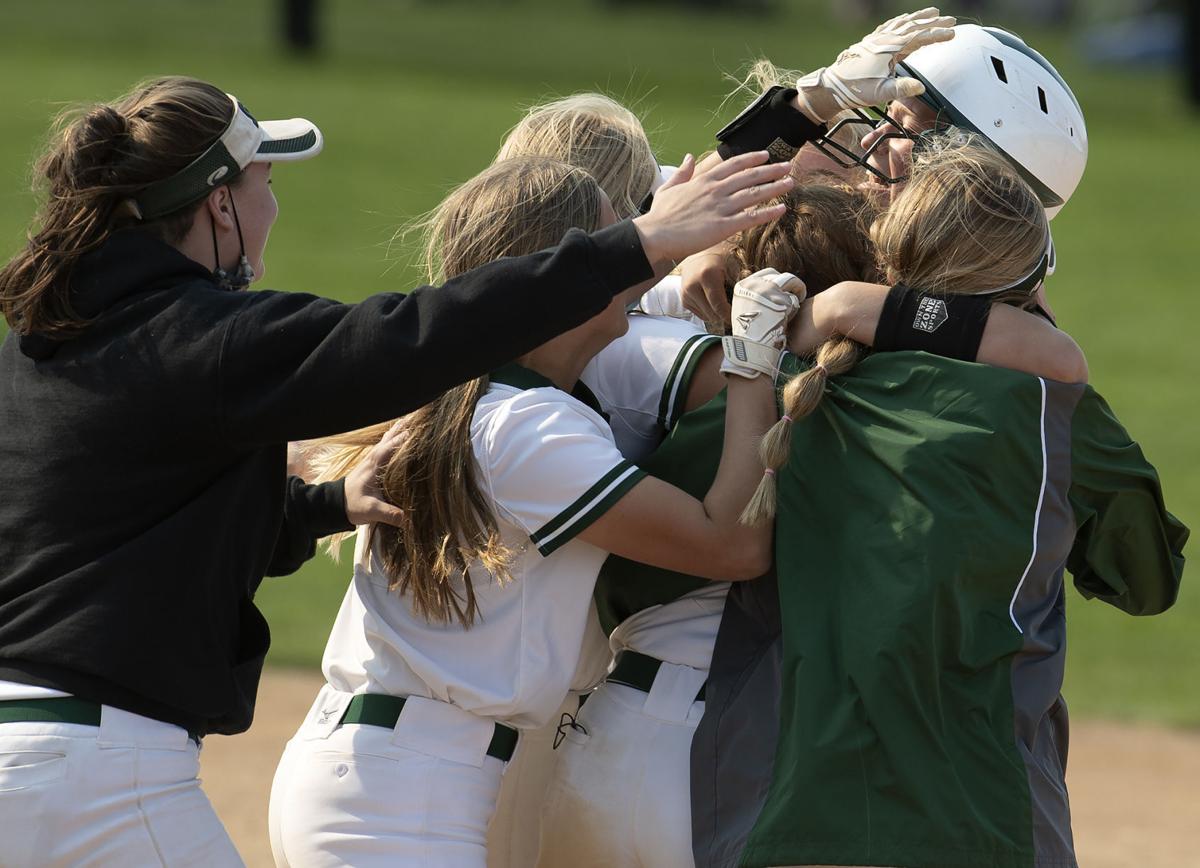 Lincoln Southwest Skylar Pieper (top right) is mobbed by her teammates after her game-winning hit Wednesday during a Class A state softball first-round game against Bellevue East at Bill Smith Softball Complex in Hastings. 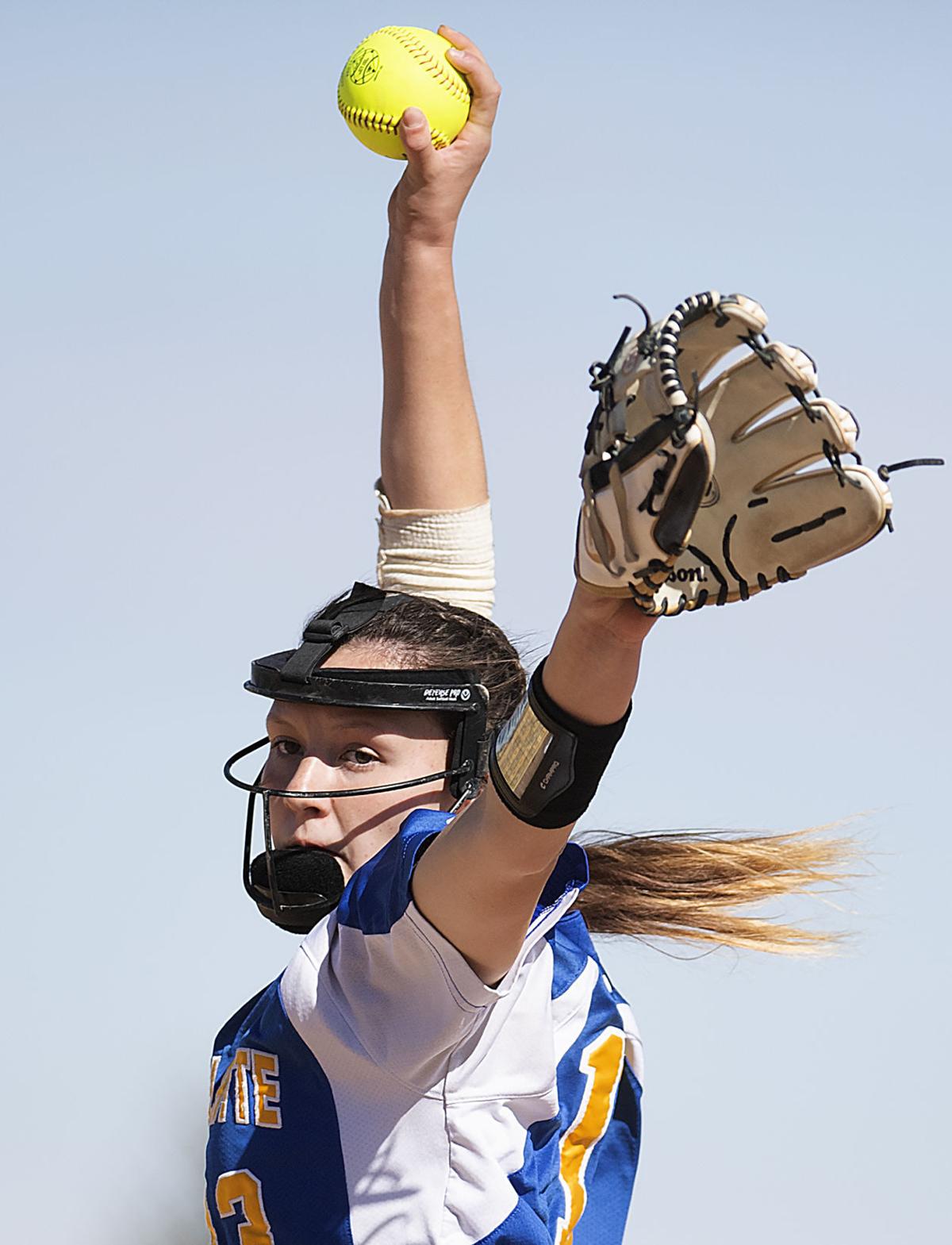 North Platte's Tatum Montelongo pitches against Lincoln Southeast during a first-round game at the Class A state tournament Wecdnesday at Bill Smith Softball Complex in Hastings.

HASTINGS — Most years, the Friday Class A winners’ bracket final features two Metro teams, or teams from the Metro and Capital City.

But after the first day, the state tournament has an outside-the-box feel to it thanks to a confident North Platte squad that made the two-hour trek from the west.

Behind five solo home runs and top-notch pitching from sophomore Tatum Montelongo, the Bulldogs upset No. 4 Lincoln Southwest 7-3 Wednesday to advance in the state tournament at Bill Smith Softball Complex.

Ticket and COVID-19 guideline reminders for the state softball tournament

Class C state softball: Bishop Neumann seeks to make most of its time in Hastings after wild first day

“If we’re at state, that’s a good thing,” North Platte coach Jeff Barner said. “Everybody you play here is a quality opponent, so it really doesn’t matter. You just got to come out, play your game and hope it’s your day.”

Indeed, it was North Platte’s day.

The Bulldogs (31-9) scored four runs in the bottom of the sixth inning to get past No. 8 Lincoln Southeast 4-1 to open the tournament, and then met a Lincoln Southwest team with a powerful lineup.

Montelongo, meanwhile, kept the Southwest (33-8) bats in check. She struck out eight and scattered six hits.

“She was working ahead, she was mixing her pitches,” Southwest coach Mark Watt said. “We know that her rise ball is really good and we swung at a few of them, but it wasn’t only her rise ball; she was in command today.”

It was North Platte’s first win in the Class A state tournament since 1999. The Bulldogs have gone back and forth between classes A and B.

Now comes the ultimate challenge. The Bulldogs will get a shot at No. 1 Papillion-La Vista, which beat its two foes Wednesday by a combined score of 24-0 to extend a state-record win streak to 70 games.

Barner expects his group to embrace the challenge.

“I mean, what can you ask for? They’re the No. 1 team in the nation,” he said. “If you’re going to be a softball player, let’s go and play, see how it goes. Just enjoy the moment, enjoy being here.”

Southwest opened with a 12-11 win against No. 7 Bellevue East, rallying not once but twice. The Silver Hawks trailed 5-0 and 7-1, took an 8-7 lead in the sixth and then scored four runs in the bottom of the seventh.

Senior Skylar Pieper, who drove in five, closed the thriller with a base hit to right field. She fell behind 0-2 in the count and eventually laced an RBI single. The ball got by the right fielder, plating two more runs on the play.

Spartan coach Lance Kingery has watched his team battle back during some tough games this year, including rallying from a 13-6 deficit in the seventh inning in the district final against Millard South, and expects the team to be ready for Papio South (22-16) at 9 a.m. Thursday.

"We'll still be line dancing before the game starts and they'll be singing Christmas songs," Kingery said. "It's just a matter of them finding their rhythm and getting everything back in the balance again."

Lincoln East and Lincoln Southeast players — outside of two players on the Knights' roster — were playing in their first state tournament games Wednesday.

Now those teams have a taste of the atmosphere heading into elimination games.

"I think on a positive side of that, it's going to help," Southeast coach Toni Closner said. "Now that they have those first-game jitters (out) and they see what it's like to play in that high-pressure situation, I think we should hopefully be able to bounce back tomorrow and respond.

"These girls have done a really good job of fighting all year long, so I know they're not going to give up."

The Knights led 1-0 against North Platte, but the Bulldogs loaded the bases in the bottom of the sixth inning, and scored two runs on an infield error. All four Bulldog runs were unearned.

The state softball tournament is here. Check out scores from all three brackets

Results and schedules for the state softball tournament in Hastings.

Live updates: It's time to crown three softball champions in Hastings. Follow along with us

What's up, Hastings? A trio of Lincoln teams and several area programs are gearing up for the state softball tournament — we're tracking live.

Pitchers can rake, too: This year's state field is loaded with players who can deliver in the circle and at the plate

This year's state field has many pitchers who are front and center on defense, but also in the middle of it all at the plate.

Leading off in the lineup isn't easy, but the Silver Hawk junior's work off the field is translating on it as a spark to the team's offense.

Alexis Wiggins hit two blasts in the first game, and Delaney White's game-ending defensive snag propelled the Titans to a pair of W's.

Masks, a new home run leader and outfield crowds among the sites at the state softball tournament Wednesday.

Lincoln Southwest Skylar Pieper (top right) is mobbed by her teammates after her game-winning hit Wednesday during a Class A state softball first-round game against Bellevue East at Bill Smith Softball Complex in Hastings.

North Platte's Tatum Montelongo pitches against Lincoln Southeast during a first-round game at the Class A state tournament Wecdnesday at Bill Smith Softball Complex in Hastings.