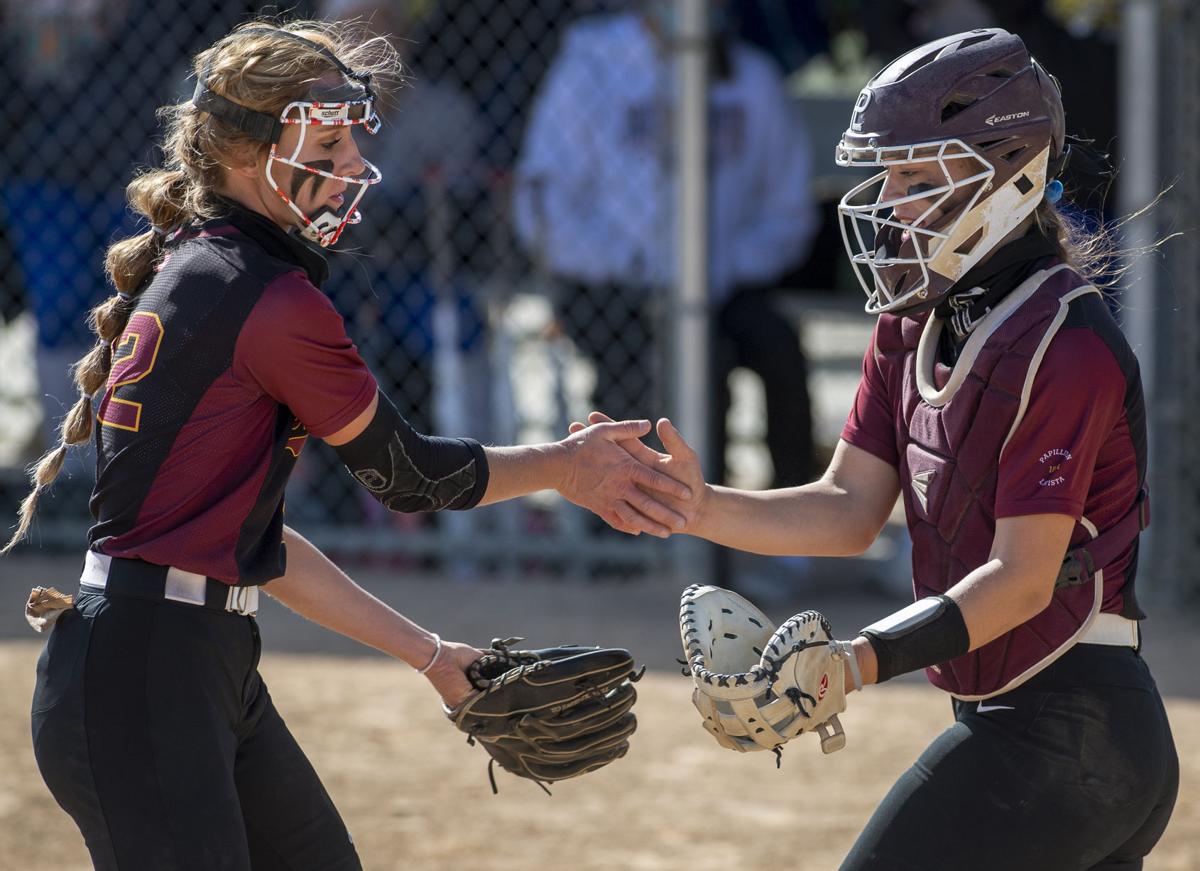 Papillion-La Vista coach Todd Petersen gets splashed after the Monarchs won their 16th state title with a victory over North Platte in the Class A state softball tournament Friday at Bill Smith Softball Complex in Hastings.

HASTINGS — It was a fitting finish to a perfect season.

Papillion-La Vista coach Todd Petersen thought about replacing Jordyn Bahl, the best player to come through these parts, with a courtesy runner when the senior reached base during the third inning of Friday’s Class A state softball championship game against North Platte.

Petersen even asked Bahl when she reached third base if she wanted to score the last run. “Yeah,” she said.

The state softball tournament is here. Check out scores from all three brackets

Bahl was her dominant self in the circle and the Monarch offense was firing on all cylinders in a 12-0, three-inning win against the Bulldogs at Bill Smith Complex. For No. 1 Papillion-La Vista, it was its third state championship in four years and its second straight 36-0 season. It’s the program’s 16th state title overall.

“We’ve had some great teams, and I feel like when our teams … when they get here they’re determined and they have the same expectations,” said Petersen, who has guided the Monarchs to five state crowns. “But this team probably had a little bit more because everybody goes, ‘Oh, nobody’s going to beat us,’ and things like that, and it’s impossible not to have that in your mind somehow, but they handled it really well.”

Papillion-La Vista, which has won 72 straight games, had to fight off North Platte, 3-0, on Thursday afternoon, leading 1-0 late in the game. But the Monarchs showed just how powerful they can be in the rematch.

Bahl, who pitched a perfect game against the Bulldogs on Thursday, struck out eight and allowed one hit. The Monarch offense scored three runs in the first inning, four in the second — aided by a two-run blast from sophomore Haley Wilwerding — and seven in the third to end the game via mercy rule. They had 12 hits, seven extra-base hits and four steals.

For the 10 Monarch seniors on the roster, it was the perfect way to cap a season and career. The senior class won 142 games and lost only four.

“All of them are special for their own different reasons,” Bahl said of the three state titles. “Freshman year because it was the first one, our second one because we were coming off an upset the year before and this one special just because this is it for half of our team.”

Bahl said the start of the day was an emotional roller coaster for the team. They got together at the hotel, shared stories about the past four years and shed some tears. Ten seniors — Bahl, Vasa, Mia Jarecki, Jenna Hoelscher, Brooke Dumont, Kate Voisin, Amaya Staehlin, Kaylee Wagner and Bailee Lampman, Anna Fitzgerald — threw on the Papio colors one last time.

When they arrived at the ballpark, they were locked in.

“To go out there one time, put on the Papio uniform and just play our hearts out, it’s the best moment ever,” Jarecki said. “We’ll remember it for the rest of our lives.”

Bahl was at her best in Hastings. She entered the tournament with a 0.11 earned-run average and didn’t allow a run in four state tournament games. The Oklahoma recruit had three hits, drove in three, scored three times and had two stolen bases Thursday.

“I mean, if she’s not the greatest ever, I don’t know,” Petersen said. “Obviously Peaches James is another one. (Bahl) was so dominant today and yesterday. She’s just a very special person. I just hope people got to see her play sometime because I don’t know how we’ll see anything like it again.”

North Platte (32-11) reached the state final for the first time since 1997 behind timely hitting and the pitching of sophomore Tatum Montelongo.

The Bulldogs held off No. 4 Lincoln Southwest (35-9) 7-6 in Thursday’s elimination game to reach the final.

“I know other people weren’t expecting us, some people out maybe further east than North Platte, but we knew we had a really solid team,” North Platte coach Jeff Barner said. “We don’t get to show it a lot to some people, but this team has been really good for a long time. We just knew we had to come play and put it all together.”

At the beginning of the season, Petersen said the Monarchs talked about topping last year's run. How do you top 36-0? It was a big challenge, but one the Monarchs enjoyed taking on. They allowed only 11 runs all season, won 25 games by eight runs or more and outscored the state competition 39-0.

“One of the hardest things to do is repeat because there is going to be way more stress on you, there’s going to be an even bigger target on your back, and I think that we handled that really well,” Bahl said. “We didn’t let us distract us and just stayed focused and let it motivate us."

Season on the line, state title in the balance, who made the decision on who would pitch for Lincoln Southwest? Well, the players, of course.

Live updates: It's time to crown three softball champions in Hastings. Follow along with us

What's up, Hastings? A trio of Lincoln teams and several area programs are gearing up for the state softball tournament — we're tracking live.

North Platte's Tatum Montelongo is playing beyond her years, among many notable performances at the state softball tournament.

Check out the final ratings for the 2020 season.

State softball wrapup: Papillion-La Vista will have a story to tell for years to come

Papillion-La Vista made history with a second consecutive 36-0 season capped by a memorable state softball tournament.

Clark Grell: Yes, there are logistical challenges, but softball finals on TV would be a great next step

Make no mistake, the state softball tournament is great as it is. But why not include TV? Sure, it's a challenge. Here are some ideas.

Papillion-La Vista coach Todd Petersen gets splashed after the Monarchs won their 16th state title with a victory over North Platte in the Class A state softball tournament Friday at Bill Smith Softball Complex in Hastings.