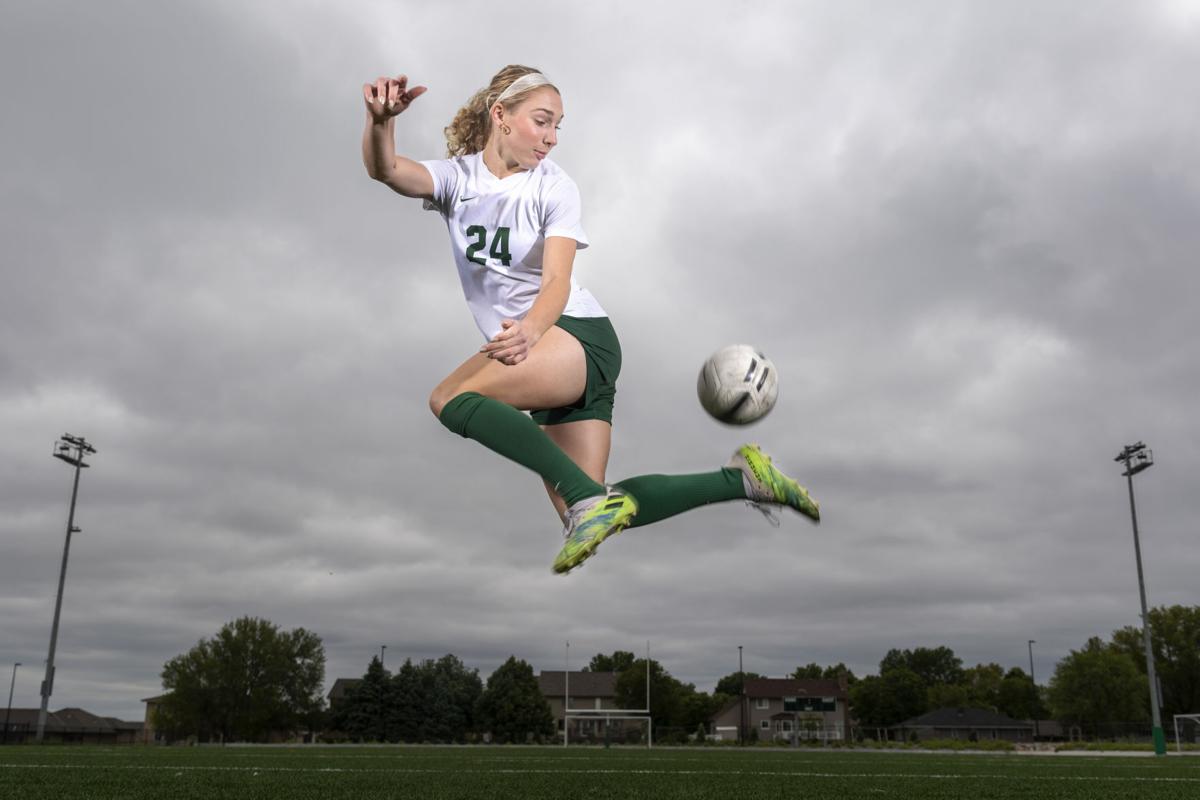 Gretna's Sarah Weber, who will play college soccer at Nebraska, scored a Class A record 48 goals this season. 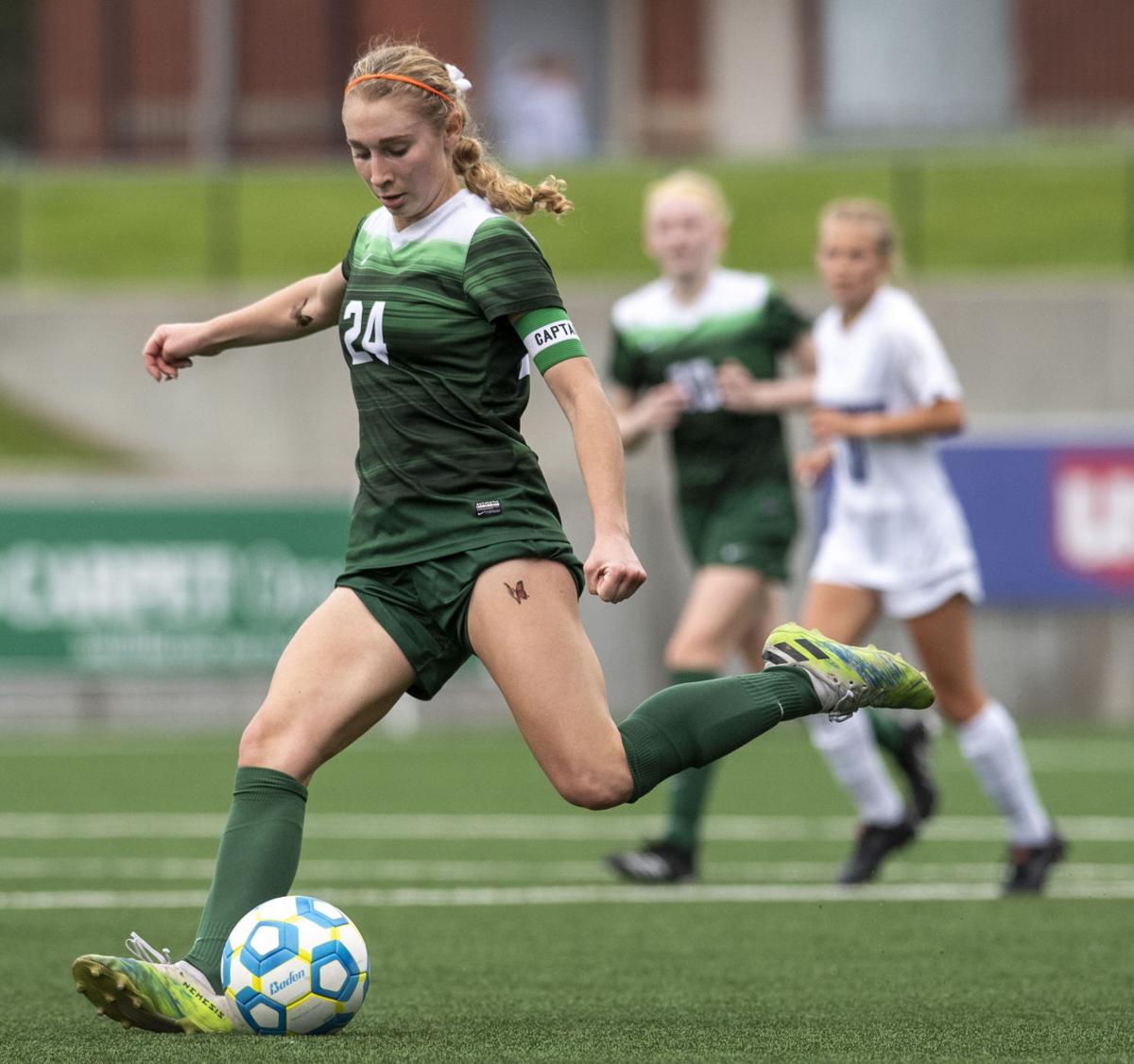 Gretna's Sarah Weber (24) takes a shot on goal in the first half against Millard North during the Class A girls soccer state championship May 18 at Morrison Stadium in Omaha.

As a sophomore Sarah Weber scored 28 goals for the Gretna girls soccer team.

That’s a really good season; so good, in fact, that she led Class A in goals for the 2019 season.

That helps put in perspective how prolific Weber was as a senior this season, blowing past that total by 20 while scoring a Class A state record 48 times. Even better was that Weber led Gretna to the state championship, the first for Gretna at the Class A level.

Boys and girls soccer: The 2021 Super-State, all-state and honorable-mention honorees

“In her freshman and sophomore years she scored 24 and 28 goals, and to double that and score 48 goals was a tremendous testament to all of her hard work,” said Gretna coach Digger Hawkins.

The all-state teams were chosen based on nominations from 89 coaches across the state and on the observations of Journal Star reporters.

The previous Class A record for goals in a season was 46 by Hannah Davis of Lincoln Southwest in 2017.

Weber had some high-scoring matches, but she reached her lofty total by consistently finding the back of the net. She scored at least once during 20 of the Dragons’ 22 matches.

“To be honest, when I got to 28, the number I had my sophomore year, I wasn’t even thinking about the amount of goals I was scoring,” Weber said. “Game to game, you’re playing the game to help your team win. They kind of racked up.”

Weber had success thanks to a mix of outstanding athleticism, soccer skill and hard work.

Hawkins has worked with Weber both during high school practices and some individual training sessions.

“Every time you give her a mark to hit like, ‘Hey I want you to juggle this amount,’ or ‘I want you to sprint within this time,’ I don’t think there has ever been a time where she hasn’t met the goal I’ve given her, which is sort of remarkable,” Hawkins said. “Her pursuit of excellence is just phenomenal.”

Hawkins had been hearing about Weber many years before high school because of what she was doing in club soccer.

“There’s a lot of people that know about Sarah Weber, and I would certainly go on record as her definitely being one of the best female players I’ve ever coached,” Hawkins said.

Some of the skill with a soccer ball on her feet comes from many years of playing tennis. As a teenager she was one of the highest-ranked players in the region. She didn't play high school tennis because it’s the same season as soccer, but she still plays in some mixed doubles tournaments.

“I like the team aspect of the sport, and all of the technical side of it,” she said. “I like scoring goals. I’ve always had that passion for soccer.”

During Gretna’s first season in Class A in 2019, the Dragons reached the state tournament semifinals. This season they got back and finished the job by beating Millard North 2-1 in the championship match.

“It was such a cool feeling,” said Weber of the championship match. “At the end, that last minute, I think it started to hit me and physically my body almost started to shut down because I was so excited and so proud of myself and my team for all of that hard work we’ve done.”

Now Weber turns her attention to getting ready to start her college soccer career playing for Nebraska. She’ll move to Lincoln in July.

“I want to get better, that’s the major thing,” said Weber of college. “That’s one of the reasons I chose Nebraska was because of their player development. The technical skills of all of the players are evident when you watch them play. I just want to get better and see where it takes me.”

In 11 of the 16 matches Fuelberth started, the opponent never scored, and he finished with a 0.44 goals-against average. He’ll play in college at Northern Illinois, and is a rare high school goalie from Nebraska to get a spot with an NCAA Division I program.

Fuelberth is just the second goalkeeper in the past 21 seasons to be chosen as the player of the year for the Super-State team.

North Platte’s Gracie Haneborg and Abby Orr were each chosen for the girls Super-State first-team, marking the first players from that program selected for that honor since Brigid Kenny in 2004.

Photos: No. 1 Omaha South edges No. 2 Lincoln Southwest in Class A final

Gretna soccer player Sarah Weber scored a Class A state record 48 goals this season, while also having 29 assists. Here are her totals for each match:

The class features Lincoln East standouts Briley Hill and Haley Peterson, along with an impressive trio from the Omaha area.

The Nebraska High School Soccer Senior Showcase will host four matches this weekend — and talent from the city and area will be featured.

A look at the top performers from the Capital City this past season from the pitch, a place where Lincoln athletes shined.

It's not often a goalkeeper on the losing team earns MVP of a game. But Alexus Townsend's uniquely impressive performance honors did.

After all-star soccer match, Southwest's Spinar will have tryout for Army soccer team

Spinar represented Lincoln Southwest one final time Saturday. Now, she hopes to walk-on at Army before she’ll have at least five years of active duty.

Girls co-coach of year: Carlson has been part of sport's state rise as builder of Skutt soccer dynasty

When John Carlson started coaching high school soccer in the state, it looked nothing like it does now. Along the way, he's collected eight titles.

She scored 48 goals and had 29 assists to help the Dragons to a 21-1 record and the Class A state championship this past season.

Gretna's Sarah Weber, who will play college soccer at Nebraska, scored a Class A record 48 goals this season.

Gretna's Sarah Weber (24) takes a shot on goal in the first half against Millard North during the Class A girls soccer state championship May 18 at Morrison Stadium in Omaha.