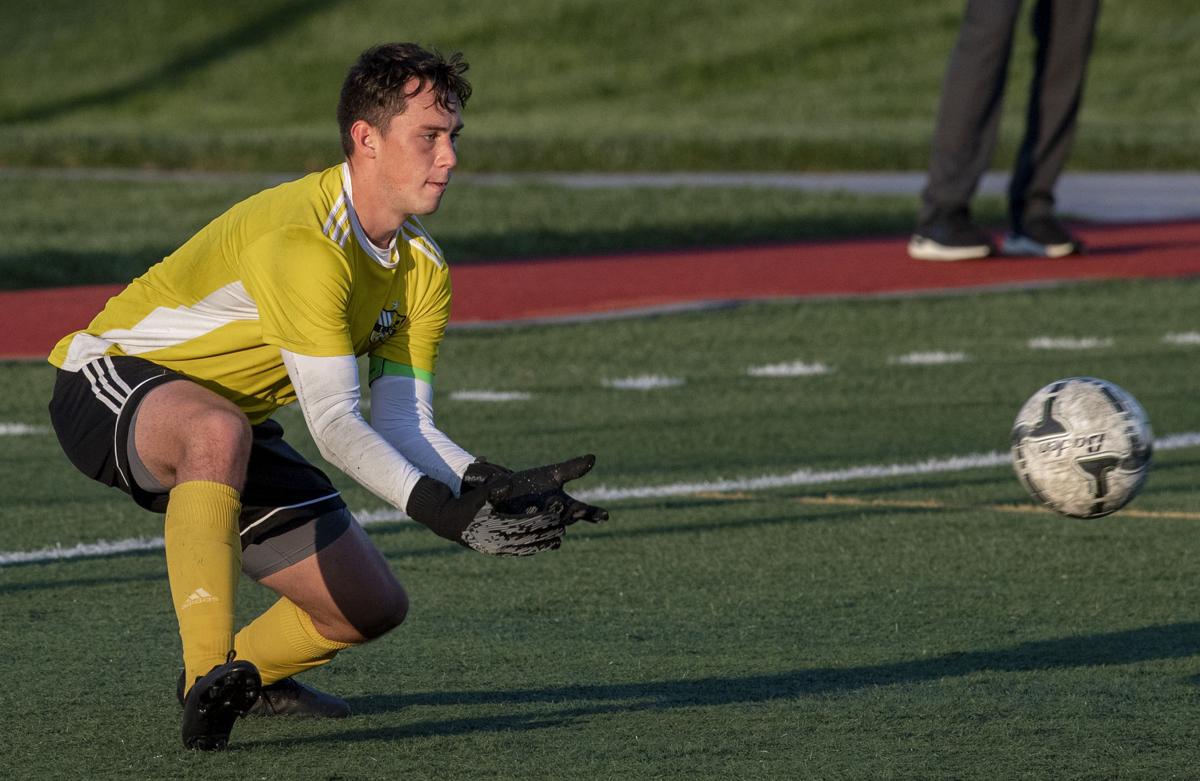 Lincoln Southwest goalkeeper Nolan Fuelberth makes a save during the district championship match against Papillion-La Vista South last week. Fuelberth has made 53 saves this season. 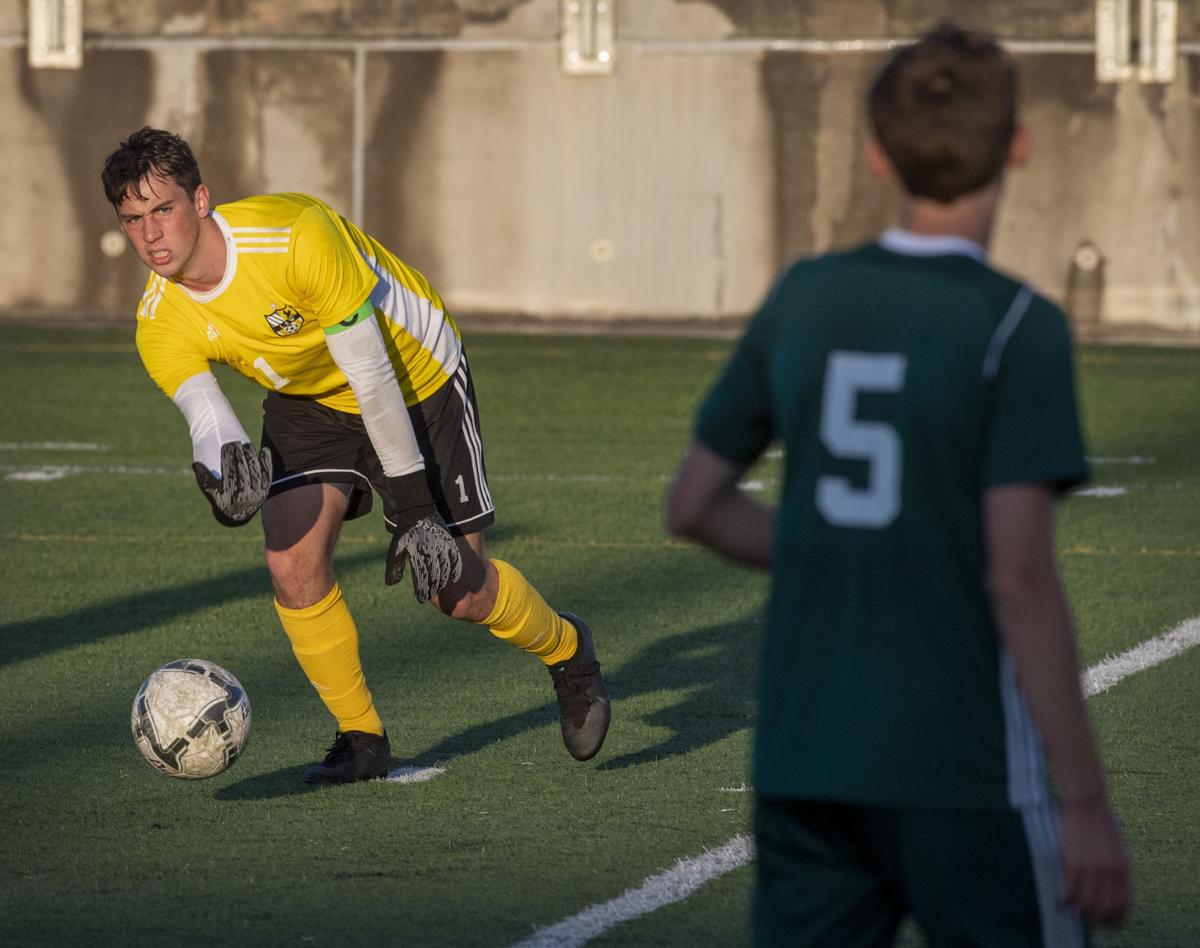 If your team sticks around at the state soccer tournament long enough, there is a decent chance you’ll be in a match that goes to a shootout.

In the last three state tournaments combined for Class A boys, there have been five shootout matches.

The Lincoln Southwest boys team is hoping to stick around at state, and if that means going to a shootout, senior goalkeeper Nolan Fuelberth will be just fine if he needs to try and make a few saves to help the Silver Hawks win a match.

Matching kicks and wins with the boys, Southwest girls make their own perfect run to state

“My favorite are honestly (penalty kicks),” Fuelberth said. “I really like going against people taking penalty kicks because I know I’m not expected to save them, so I feel like they have all of the pressure on them. I think I do really well with penalties.”

Fuelberth is one of the top goalies in the state and is hoping to lead the second-ranked Silver Hawks to a second state championship in boys soccer. The Silver Hawks play unrated Grand Island in the first round at 4 p.m. Tuesday.

The entire state tournament will be played at Creighton’s Morrison Stadium, but the schedule has been expanded from six days to eight due to COVID-19 protocols. The stadium will be cleared after each match. The Class A boys semifinals are Saturday, and the championship match is next Tuesday.

Watch now: 10 of the best saves of the season by Nolan Fuelberth

Fuelberth helped lead the Silver Hawks (15-0) to its first undefeated regular season in program history. Fuelberth is 13-0 as a starter. He leads Class A in goals-against average (0.39), allowing just five goals all season. Southwest recently had five consecutive shutouts.

Fuelberth also gets a lot of help from his back line of defenders, which includes Caedmon Schwanke, Leighton Jeppson, Braeden Bestmann, Judson Martin and Quintin Kniss.

There is a lot of pressure on a goalie. There are many routine saves, but also a few plays each match that could decide it. Fuelberth has been credited with 53 saves this season.

“I like having that pressure on me, and knowing that I can change the outcome of a game when I need to,” Fuelberth said.

Fuelberth has played a few matches at Morrison Stadium with his club team and with the Olympic Development program. Now he’s excited to play there for the first time during the state tournament.

“It’s a huge field and really nice turf,” Fuelberth said. “It’s really one of the best stadiums in soccer that I’ve played at. Being able to use that space to our advantage as a team, and I love being able to play those long balls and switching the field of play.”

Fuelberth will play college soccer at Northern Illinois, where he earned athletic and academic scholarships.

Former Southwest soccer player Parker Jeppson already plays there, and Scheich recommended to the coaches that they also take a look at Fuelberth.

Players from Nebraska high schools getting recruited to play goalie for a NCAA Division I college is rare. Fuelberth is believed to be the first since 2008. While college teams might have 10 midfielders on the roster, they usually only have three or four goalies.

“In college men’s soccer you’re not just competing with players from the U.S. It’s an international market,” Scheich said. “So a lot of these Division I coaches are going overseas to find players that maybe don’t quite make it professionally, or they wash out of the academies in Europe. The supply of goalkeepers available to the amount of positions available is a very big ratio. So for a kid from Nebraska to get that kind of offer is a pretty big deal.”

One of the Southwest’s biggest wins of the season was a 1-0 shootout victory against Omaha Skutt when Fuelberth made two saves in the shootout.

“I wasn’t surprised because in training we take penalties once or twice a week and he always saves at least two or three of them, much to the chagrin of our players,” Scheich said. “For him to get two was crucial for us in winning that match.”

There are five teams from Lincoln in the state tournament, which is the most since there were five in 2015. Also qualifying are the Southeast boys and the Lincoln East, Lincoln Southwest and Lincoln Lutheran/Raymond Central girls.

* All games are at Creighton's Morrison Stadium in Omaha.

* Only single-game tickets are being sold this year, and the venue will be cleared out between games.

The postseason is underway. Brent C. Wagner updates the ratings.

Still perfect on the pitch, No. 2 Southwest soars into state behind A-1 title victory

One of the smallest soccer schools in the state, the Warriors, who co-op with Raymond Central, are headed to the state for the first time since 2013.

A look at Monday's highlights from around the city.

The best match of the first day of the Class A state boys soccer tournament was the last one, the lone game decided by one goal.

Coach Tyler Ortlieb said some of the younger Dragons "psyched themselves out going into the game," and he noticed it in a scoreless first 15 minutes.

State soccer: Southwest shows it's 'cooking at the right time' with quick strikes against Islanders

Goals can be difficult to come by in the state tournament. Perhaps that makes the Silver Hawks' scoring burst even more impressive.

After going 39 minutes without a goal to start the match, the teams combined for nine goals over the next 31 minutes of the match.

Lincoln Southwest finished with 19 shots on goal, but many were from long distances. Millard North had five shots on goal.

Southwest has reached the championship match for the second time in program history.

“If you walk into the playground in south Omaha the first thing you see is a bunch of kids standing in front of a goal and shooting PKs."

A look at the top performers from the Capital City this past season from the pitch, a place where Lincoln athletes shined.

Lincoln Southwest goalkeeper Nolan Fuelberth makes a save during the district championship match against Papillion-La Vista South last week. Fuelberth has made 53 saves this season.