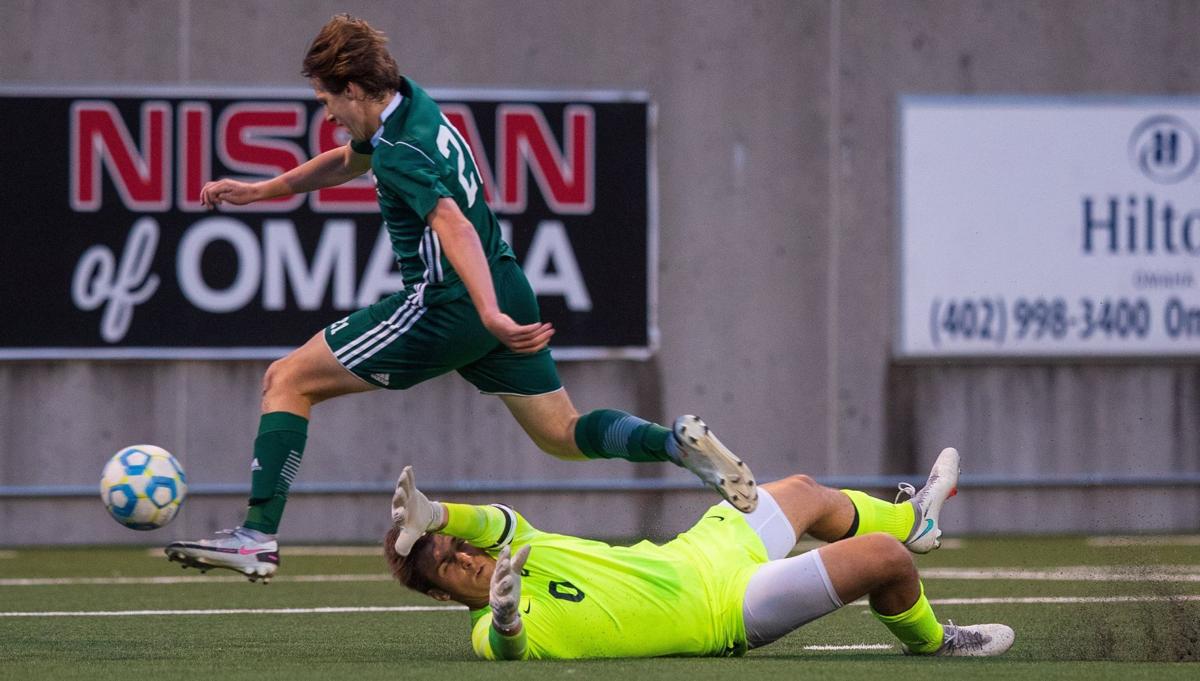 OMAHA — More so than in many sports, trophies are a big part of the tradition of soccer.

This season the Lincoln Southwest boys set out to win six trophies, and reaching that goal is now within reach with only the state championship trophy still to claim.

The second-ranked Silver Hawks advanced to the Class A boys title match with a 1-0 victory against No. 5 Creighton Prep on Saturday evening at Morrison Stadium.

Five trophies down, with just one to go.

“It’s surreal to me,” said Southwest senior midfielder Eli Rhodes. “We’ve come so far this season, and just to think we have a shot to do what our goal was at the beginning of the season really just proves that you can do anything that you put your mind to, and that’s one thing that keeps us going.”

Southwest scored the only goal of the match with just two minutes remaining in the first half. Ramzy Hamouda scored with a shot from about 15 yards for the senior’s eighth goal of the season. Hamouda got a short pass from Rhodes through the defense, timed his shot perfectly and one-touched a blast into the far corner of the goal as the goalie closed in on him.

“It was a great finish,” Rhodes said. “(Hamouda) put it right over the keeper, bottom left. I’m just glad I was able to hear him. With the huge Prep crowd it was really hard to hear out there, but I heard him and saw him out of the corner of my eye, so I just slotted him through and he had a great finish.”

Hamouda is playing his first season for Southwest. He was at Lincoln Northeast before transferring to Southwest and joining up with several players he’d played club soccer with for many years.

About 10 minutes into the second half, Hamouda collided with a Prep player, and had to leave the match. His status for the title match is unknown.

“He’ll forever have the goal that put us in our second final as a program,” said Southwest coach Derek Scheich.

Southwest led in shots on goal, 9-2. Creighton Prep didn’t get a shot on goal until 49 minutes into the match.

Prep is a traditional power with a state record nine state titles, but this season the Jays (13-6) weren’t as strong on offense as past Creighton Prep squads.

“We honestly didn’t feel any pressure coming into this match,” Scheich said. “It was just an opportunity to go play one of the blue-blood programs in the state and prove ourselves again. I’m proud of the guys for grinding it out and getting the win.”

Southwest is the first boys or girls team from Lincoln to reach a state soccer final since 2014, when the Southwest boys also reached the title match and won.

The Silver Hawks are also one win away from being the first undefeated state champion in Class A boys since Omaha South did so in 2013.

Southwest and Omaha South’s match on Tuesday will be the first time those teams have played at the state tournament.

“It will be exciting to have the eyes of Nebraska on you, but we’re just going to go out and try and take care of business like we’ve done 17 times this season already,” Scheich said.

State soccer: Omaha South returns to state final, looks to 'try and win it for those guys' whose seasons were canceled by pandemic

The Packers thought they were also going to be highly competitive in 2020. “We were loaded last year and we could have probably won state."

The mindset? “We have nothing to lose ... Like against Gretna and Lincoln Southwest we just said, ‘Let’s just go out there and give it our all.’”

“If you walk into the playground in south Omaha the first thing you see is a bunch of kids standing in front of a goal and shooting PKs."