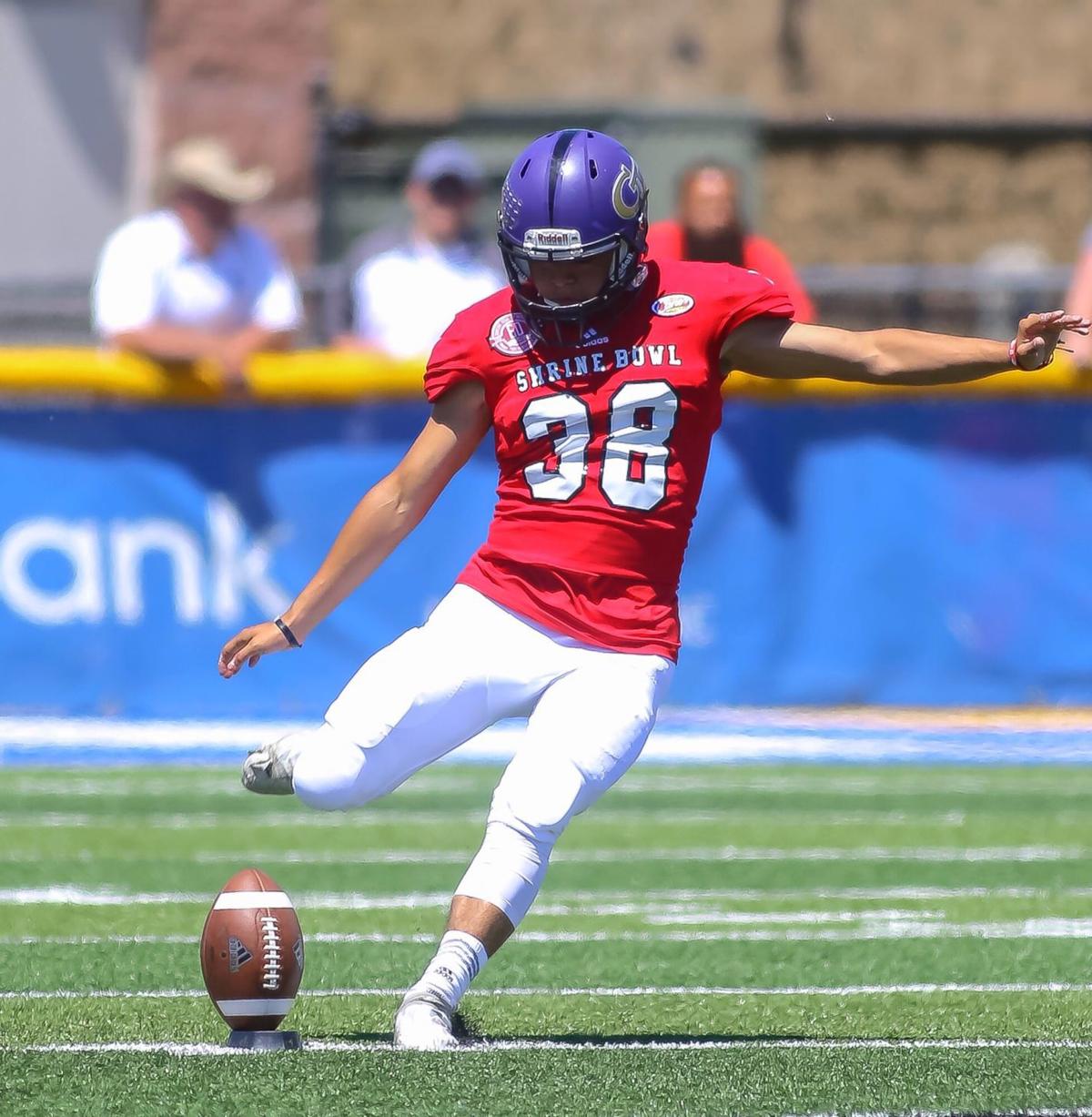 Brian Covarrubias from Grand Island played in the Shrine football game last week, and will play in the Shrine soccer match on Sunday. 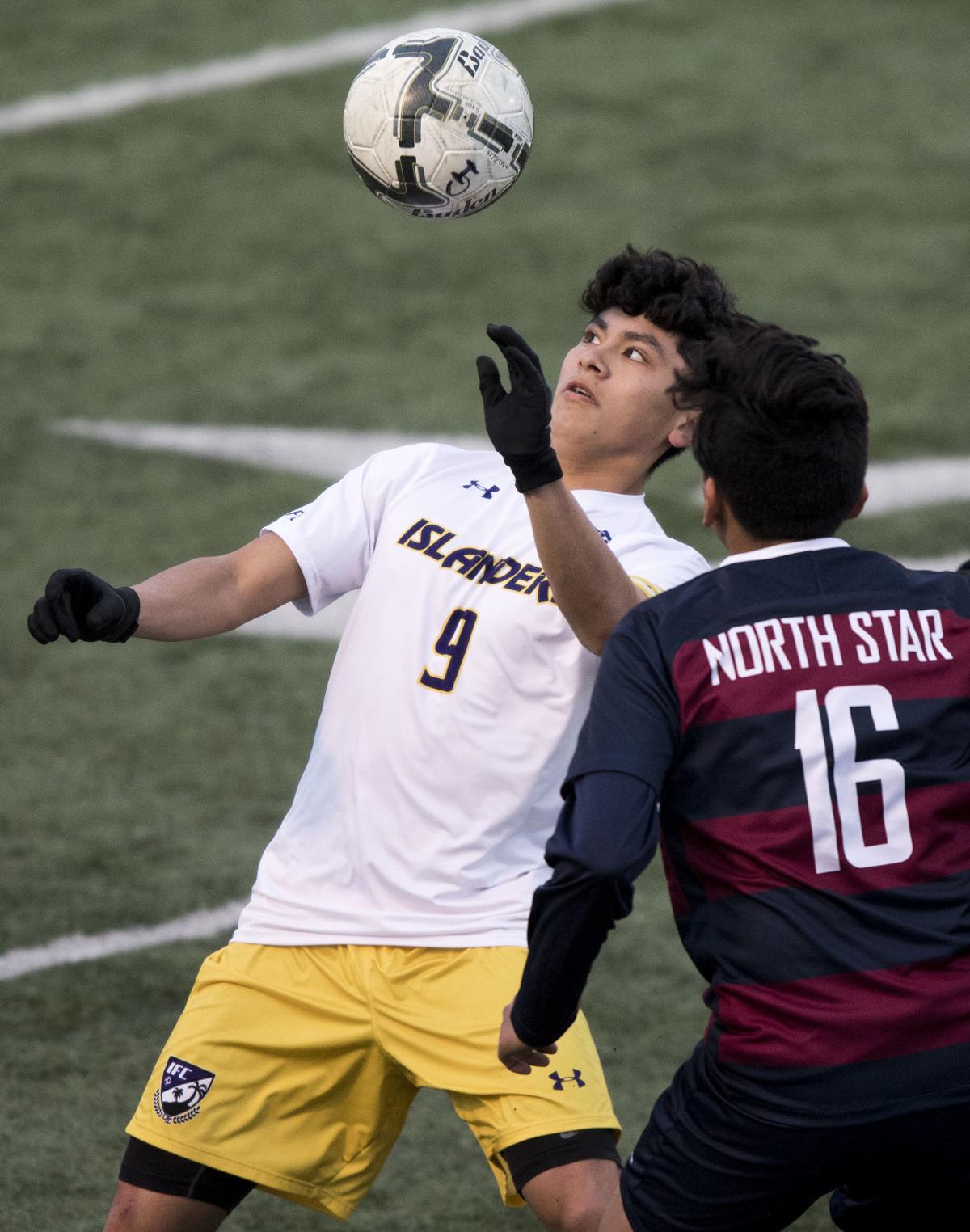 Grand Island's Brian Covarrubias (9) heads the ball away from Lincoln North Star's Randy Izaguirre (16) in the second half during the Heartland Athletic Conference Tournament semifinals in April at Seacrest Field.

Being chosen to play in a Shrine sporting event is a special experience for a high school athlete.

It means that you were one of the best players in the state in the senior class. Then after you take part in the event, you learn more about the beneficiary of the games, the Shriners Hospitals for Children, and you get to experience being a part of something bigger than yourself.

For Brian Covarrubias of Grand Island, he’ll get the rare chance to experience that twice, playing in both the Shrine Bowl football game and the Nebraska Shrine Soccer Classic.

Last week he played in the Shrine football game in Kearney, and on Sunday afternoon it’s the soccer match in Omaha.

It’s rare to have a player chosen for both events, and Covarrubias got an even better understanding of that during the Shrine Bowl. With the rosters limited to 34 players for each team, Shrine officials told Covarrubias that sometimes coaches chose a player who can both kick and play on offense or defense. Covarrubias is only a kicker.

During the Shrine Bowl, Covarrubias played for North team, which lost 24-21. He handled kickoffs and made three extra points.

He had a great experience at the Shrine Bowl.

“It’s a real good feeling because you’re playing with the best in the state, and then throughout the week you meet the Shrine kids, and that’s what it’s all about and when it all comes together,” Covarrubias said. “You find out what you’re actually playing for and it’s an overwhelming feeling.”

Soccer is his favorite, Covarrubias said, but it’s football that will help him attend college. He’ll join the football team at Nebraska-Kearney, and with a football scholarship and other financial aid, most of his tuition will be covered.

He also had college soccer offers, but football was the best combination for playing at a high level and academics. His goal is to be an elementary teacher.

Covarrubias got his start in football when he was growing up living near Grand Island Central Catholic High School. He’d go there and kick on the high school football field. He was the kicker for the Islanders for four years, with his longest field goal being 42 yards. He was chosen as the kicker for the Lincoln Journal Star Super-State football team.

“Not many people get to do it, so I get to relive the experience again down in Omaha with soccer this time,” Covarrubias said.

Covarrubias was also chosen for the Super-State team in soccer as a defender. He scored three goals and had four assists and helped Grand Island qualify for the state tournament.

The 25th Nebraska Shine Soccer Classic will be played on Sunday at Creighton University’s Morrison Stadium.

A look at the Journal Star's Super-State and all-state soccer lists.

York's Glen Snodgrass and Omaha Burke's Paul Limongi have been selected as head coaches for the 2019 Shrine Bowl in Kearney.

The Nebraska Shrine Soccer Classic has been canceled for this year, but a high school soccer coach in Omaha has quickly organized a different …

Watch: Hannah Davis and the race to 100

Watch: Hannah Davis and the race to 100

Watch: "Just put the ball in the back of the net"

Watch: "Just put the ball in the back of the net"

Brian Covarrubias from Grand Island played in the Shrine football game last week, and will play in the Shrine soccer match on Sunday.

Grand Island's Brian Covarrubias (9) heads the ball away from Lincoln North Star's Randy Izaguirre (16) in the second half during the Heartland Athletic Conference Tournament semifinals in April at Seacrest Field.