Girls soccer: For several high school soccer players in Nebraska playing defender was their ticket to NCAA Division I
0 comments
Share this
{{featured_button_text}}
1 of 3 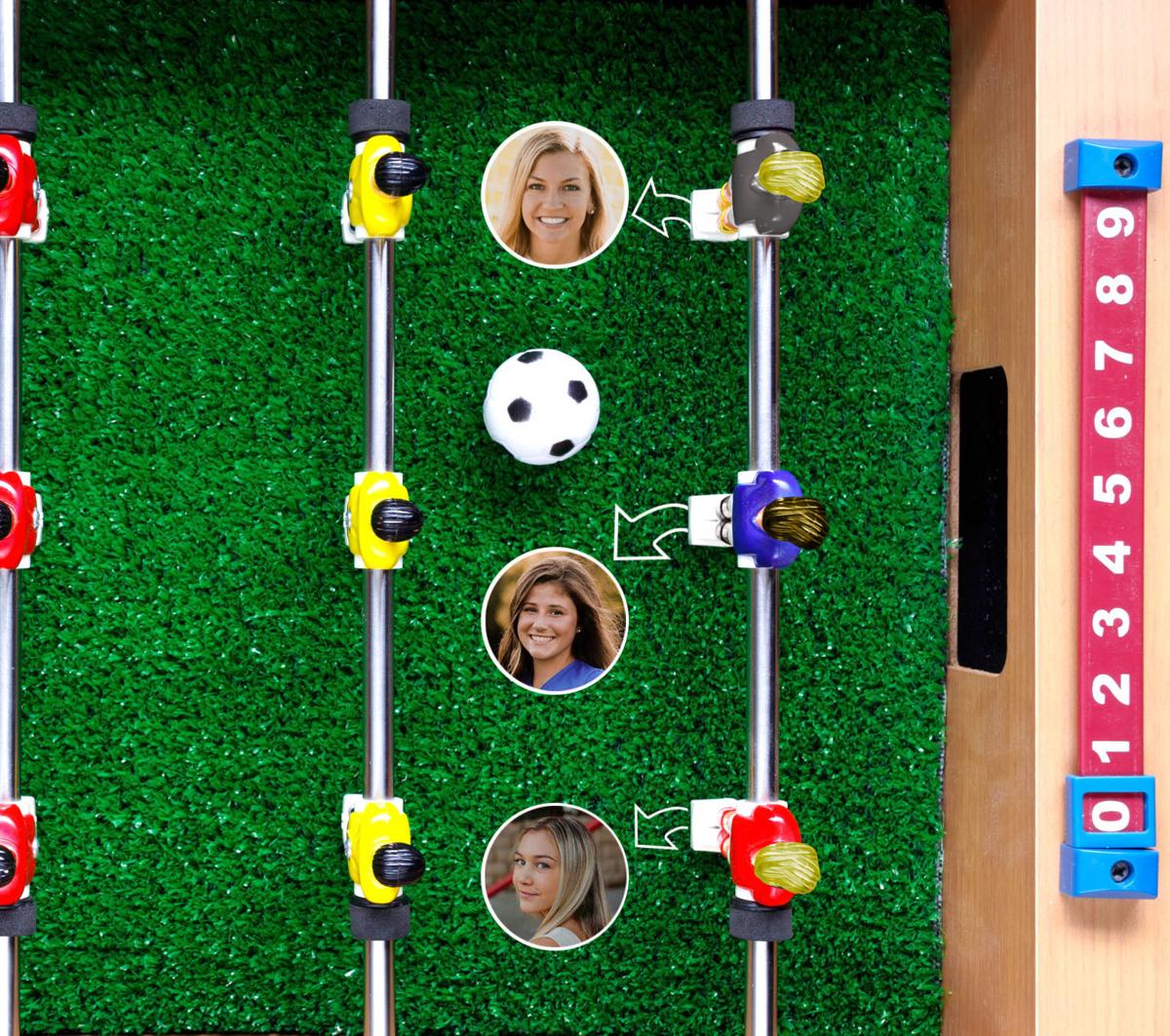 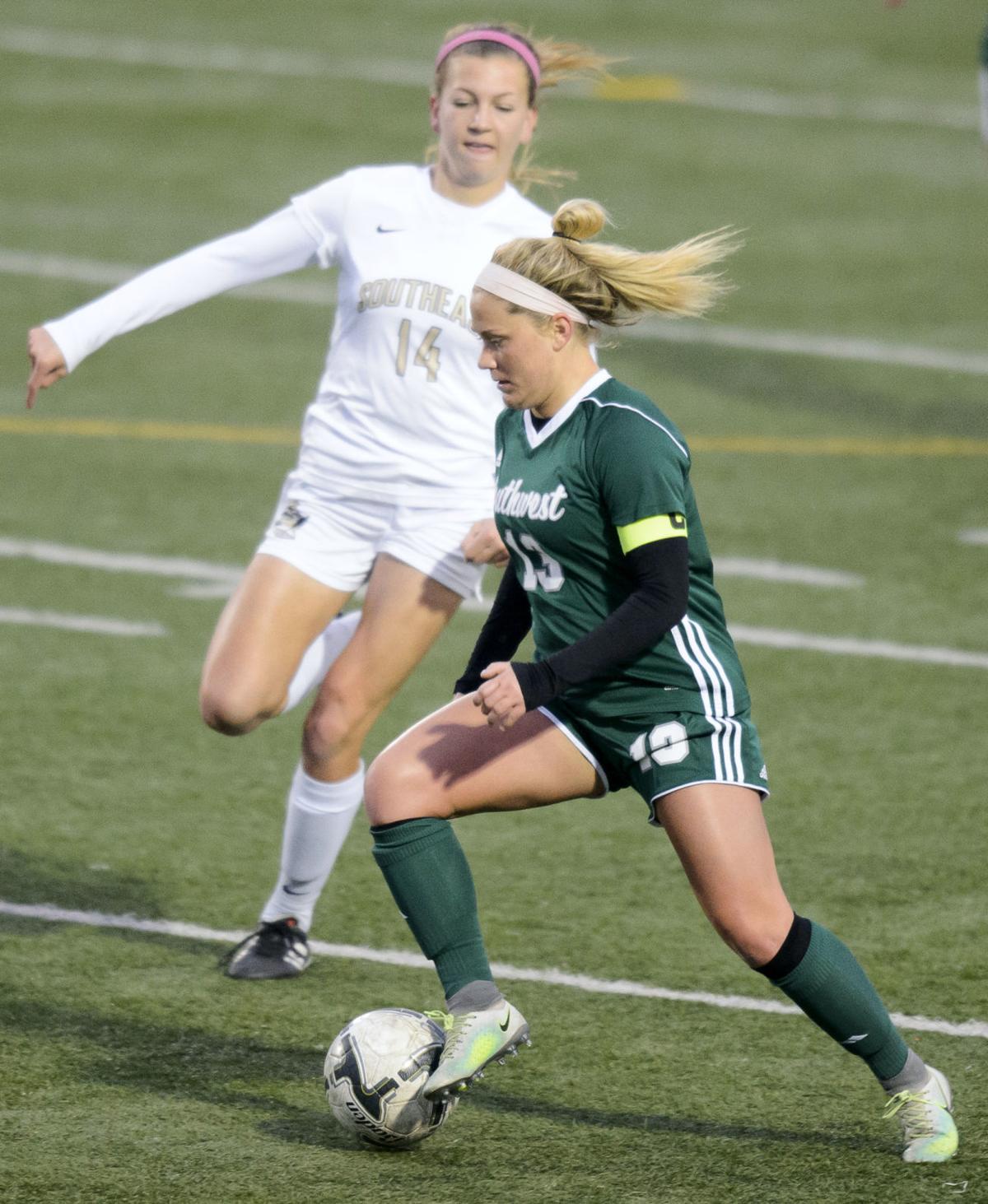 Lincoln Southwest's Hannah Davis (right) tries to get away from Lincoln Southeast defender Mackenzie Boeve during a match at Seacrest Field in 2017. 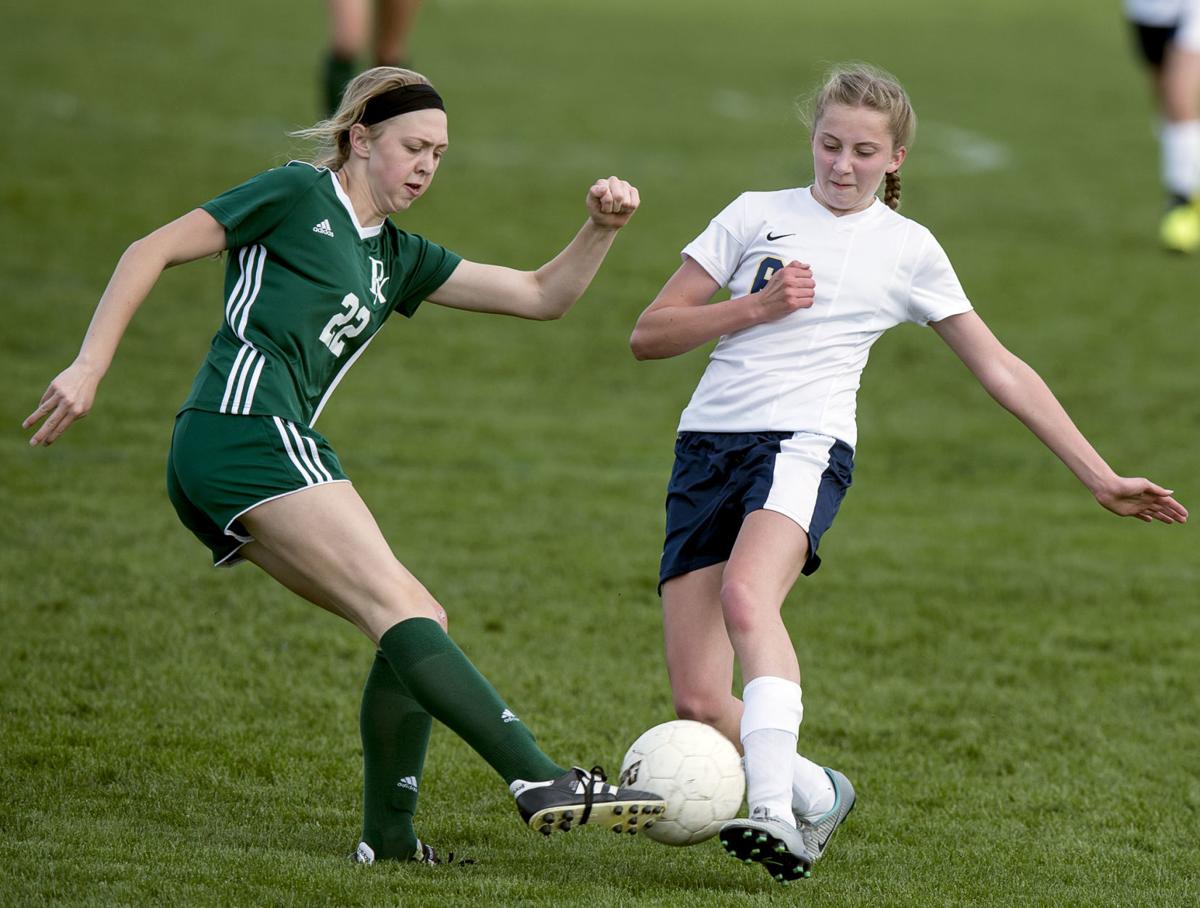 Lincoln Pius X's Brylie Meyer (left) and Lincoln Lutheran's Alayna Bergt (6) converge on the ball during a match in 2017.

In a soccer match the players who play the forward position often score the goals, the midfielders usually touch the ball the most, and the goalie has the chance to win the match if it goes to a shootout.

That may make the defender position underappreciated by some people, but not to many coaches. To the coaches, a good defender has a better chance at stopping a goal from being scored than a goalkeeper. And a versatile player at defender can also start the attack by making a good pass to the midfield.

At the high school level, if you’re a good defender you rarely get subbed out of the match.

Tim Walters, the college coach for the Omaha women’s soccer team, considers the defenders — the two center backs and left and right fullbacks — some of the most important players on the team.

While at the high school level soccer statistics are sometimes limited to goals and assists, in college the coaches have video and computer software programs that help them track numerous stats for defenders. Those stats include the percentage of tackles won, headers won, blocked shots and the percentage of passes that advanced the ball up the field. That helps the coaches to see the impact a great defender can have on a match.

And the center back is the core of your leadership during a match, Walters said.

“Everything happens back to front on how you start, and how you build up, starting with your center backs,” Walters said. “And on the other end, they’re kind of your last line of defense. Having two good center backs can save you a lot of goals over the course of a long season. When we’re recruiting, it’s a really important thing we’re looking for.”

The high school soccer season in Nebraska was canceled this season due to the coronavirus pandemic, but many girls soccer players have been recruited to play college soccer. And of the 47 players known to have signed or made verbal commitments to play women’s soccer at an NCAA Division I program, 21 play defender.

Some of the better players in the state play defender, too. Mackenzie Boeve from Lincoln Southeast will play college soccer for Kansas, Grace Crockett from Omaha Marian is going to UNO, and Lexi Thomsen from Elkhorn is going to Nebraska.

Why does Walters think so many defenders in Nebraska were recruited?

“We have good athletes here,” he said. “I think that’s part of it, good athletes and good club coaches. Fullbacks, in particular, we have good, fit athletes, and college coaches are looking for players who can run up and down the sideline for 90 minutes. One of our starting fullbacks, Brylie Meyer, is from Lincoln (Pius X), and she is super-fit and gets up and down the line for 90 minutes.”

When Walters is evaluating players during the recruiting process — and especially when it comes to the defender position — he’s looking for a player with a big presence.

“So when you walk up to a field when you’re recruiting you can usually tell right away what center back has a good presence,” Walters said. “And then we’re looking for someone who is comfortable on the ball. And that can be hard to find. Center backs that are comfortable on the ball and that have a great presence, they’re usually highly recruited.”

On some youth and high school teams, coaches may have many players who want to play defender, but other times you have to move players from other positions to defender. Crockett thinks moving to defender during youth soccer gave her an opportunity to play college soccer.

“Playing that position helped me get the looks that I had,” Crockett said.

When Southeast girls coach Jim Ageton is choosing the players for the defender spot, the No. 1 thing he looks for is players that are competitive.

“I want that kid that hates to lose at anything,” Ageton said. “I want the kid who wants to throw the pingpong paddle across the room because they got beat by their brother. Because that kid will never give up on a play. It doesn’t matter if they’re on the left side and the breakaway is all the way over on the right side of the field, that kid hates to lose, so they’re going to get over there.”

A look at how Briley Hill is trying to buck the trend of in-state athletes having little impact on the Nebraska women's soccer team.

Millard West had some lofty goals for 2020, before the COVID-19 pandemic led to spring sports being canceled.

Senior Salutes: Southeast soccer seniors left their mark long before the spring of 2020

After 12 years coaching soccer at his alma mater, including the last eight as head coach, Chris Simley has resigned.

We're going to miss spring sports, including the performances of these 25 area athletes

Creating a list of area athletes we wanted to watch this spring is quite long. We trimmed it down to these 25 names.

The Nebraska soccer team announced the signings of nine recruits, including six from Nebraska.

A list of Division I, II, III and NAIA signings from across the state

Wednesday was a big day for high schools and colleges, with players from multiple sports across the state signing with Division I, Division II, Division III and NAIA schools.

Liz Sundberg takes over for Jim Ageton, who resigned earlier this month to spend more time with his family.

Thanks to a tweet from a soccer coach in the Metro, a high school soccer division has been added to the lineup for the Cornhusker State Games.

Eight years after she graduated from high school, Paige Nielsen is still playing soccer, and it has taken her all over the world.

The Nebraska High School Soccer Senior Showcase will have matches on Friday and Saturday at Omaha Skutt High School.

OMAHA — Raymond Central doesn’t have its own girls soccer team, but students at the school can still play the sport because of a co-op team wi…

The class features Lincoln East standouts Briley Hill and Haley Peterson, along with an impressive trio from the Omaha area.

'It's been a long time': High school soccer teams, including 'defending' champs, adjusting to two-year layoff

The Millard West girls are doing team book studies. The Omaha South boys have a rare matchup with a team from Illinois. And everyone is adjusting.

The Lincoln Southwest boys soccer team has come back in a big way with a 3-0 record to start the season.

East girls still deciding on a goalie, but goals are no problem as Spartans score six to beat Southeast

“We’ve been able to put the ball in the back of the net a lot, so that’s good to see.”

Lincoln Southwest's Hannah Davis (right) tries to get away from Lincoln Southeast defender Mackenzie Boeve during a match at Seacrest Field in 2017.

Lincoln Pius X's Brylie Meyer (left) and Lincoln Lutheran's Alayna Bergt (6) converge on the ball during a match in 2017.