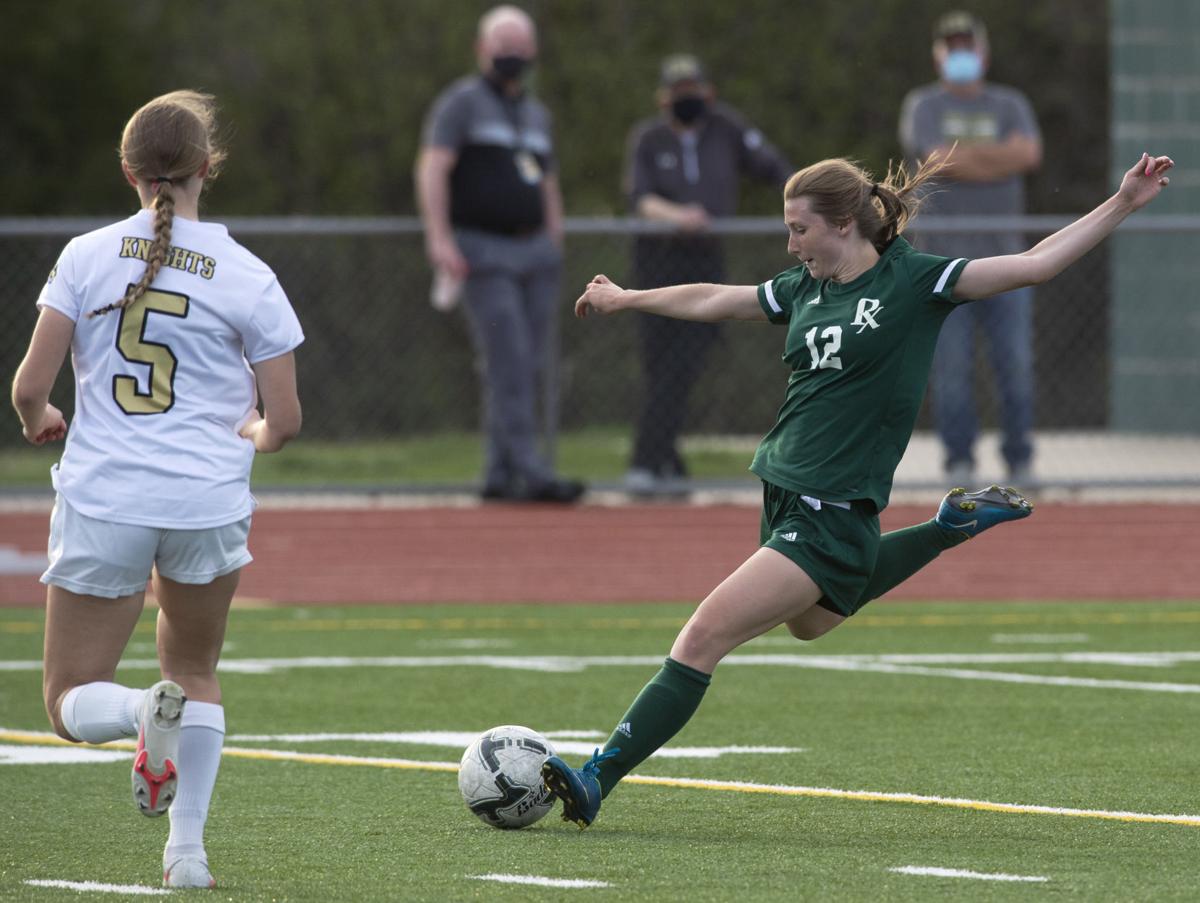 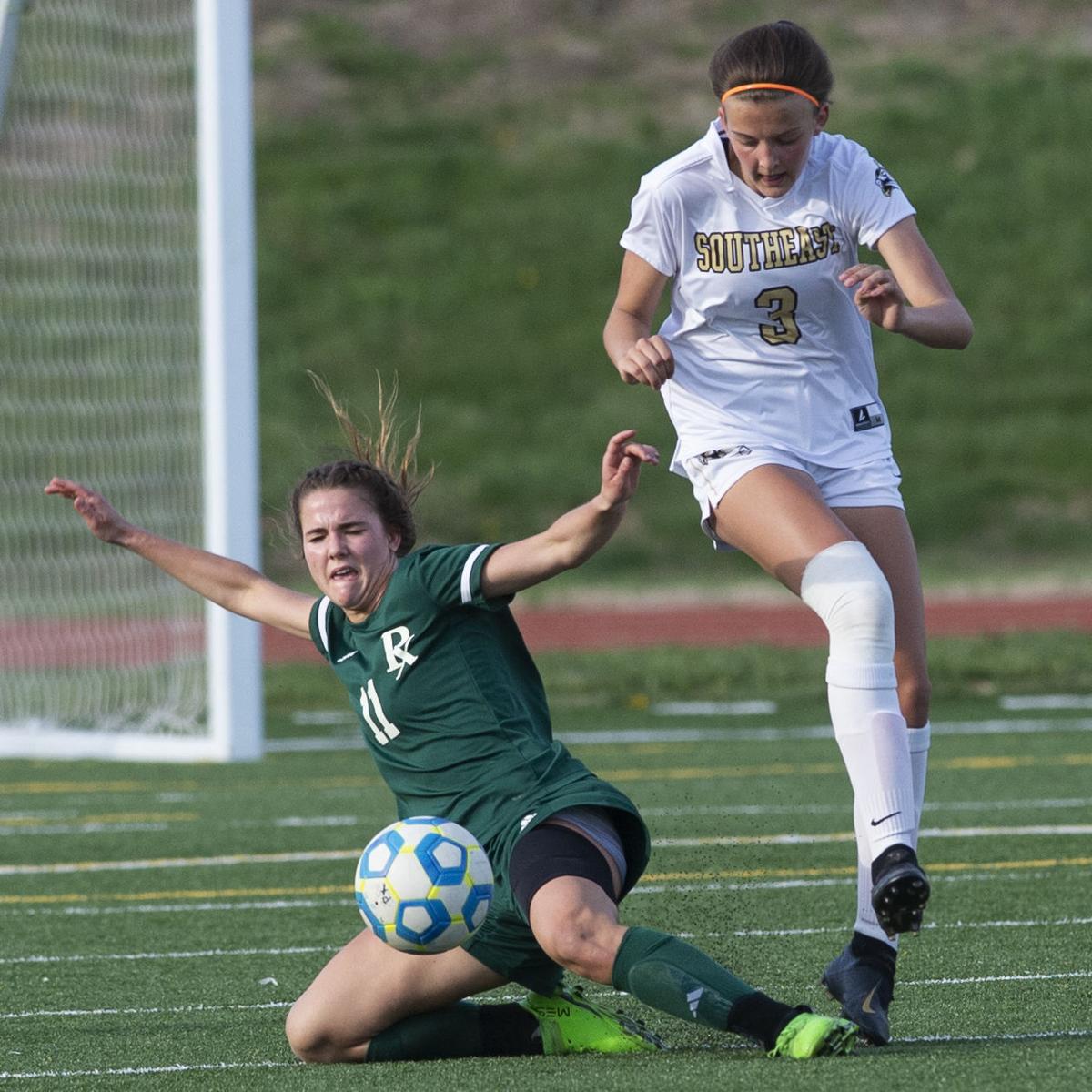 Lincoln Pius X's Abby Vacek slide-tackles the ball away from Lincoln Southeast's Kylee Kurtzer in the second half Monday at Pius X.

It's safe to say the opening 10 minutes of Monday's match against the Lincoln Southeast girls soccer team didn't go too well for Lincoln Pius X.

From the opening whistle, the Knights applied maximum pressure to the Thunderbolts, which eventually led to a counterattack that Southeast (5-2) freshman Sam Searcy finished off with a goal to go up 1-0 in the 10th minute.

However, Pius X (4-3) answered with pressure of its own for the next 80 minutes, and as two straight goals, including one in the 75th minute, lifted the Thunderbolts past the Knights at Aldrich Field.

"Well, it was definitely a challenge, anytime you play (Lincoln) Southeast it's a challenge, and we put that on our girls before the match," said Pius X coach Steve Andersen. "They (Southeast) stepped up, and we really appreciate everything everyone did."

After Searcy netted her sixth goal of the season, it seemed as though the Knights would run away with Monday night's affair. But no panic set in for the Thunderbolts, who relied on their back five to do the heavy lifting.

That strategy paid off as the entire game flipped. Pius X took the storm to the Knights for the next 80 minutes, racking up 20 shots by game's end.

"Pressure, if applied long enough, creates diamonds, and that's exactly what our back five girls did back there," Andersen said. "They formed a nice little diamond that kept Southeast on their heels, and we finished it out."

It wasn't all defense for the Thunderbolts. Pius X got a goal from junior Tenley Hiemes in the 31st minute to tie it at 1-1.

The pace didn't change in the final 40 minutes, with everything coming to fruition in the 75th minute where Payton Tuttle put home the game-winning goal off a shot just within the penalty box.

"Payton Tuttle is just a hustler," Andersen said. "I don't know what she eats for breakfast, but I'm going to try to get it to the whole team."

Like many teams in the state, past varsity experience is at a premium, and Andersen was quick to point out if it weren't for their two experienced seniors, Cassidy Kobza and Monica Hanus, they wouldn't be where they're at.

"If it wasn't for our two seniors, there's maybe one other girl on this field that's ever seen a varsity game," he said. "They (Kobza and Hanus) got big backs because they're carrying us right now."

Not only was this an important city win for Andersen's team, but also to build confidence and character as the Thunderbolts look forward to the next stretch of their schedule.

That includes matches against No. 1 Lincoln East and No. 10 Omaha Westside.

"To basically not use the wind to our advantage and then to scrap back and take care of business goes a long way toward where we're going, which is the Lincoln East, (Omaha) Marian, (Omaha) Westsides of the world," Andersen said. "That's who we're competing against, and this kind of game makes us better."

A look at Monday's results from the pitch.

Just a few weeks ago, McKenna Rathbun was wearing basketball sneakers and running up and down the Pinnacle Bank Arena court in a state tournam…

After a COVID-canceled track season, Raymond Central jumper Mueller happy to compete regardless of the weather

“I’m just happy for any opportunity to compete this season,” said Grace Mueller after winning the girls long jump and triple jump (34-10½) at Wednesday's Malcolm Invitational.

'She hates to get beat:' Lincoln High sprinter DeFrand finally gets chance to show off her speed

Dajaz DeFrand's speed makes her a threat to set state sprint records this spring. Her perseverance just adds to the possibilities.

Several teams are still undefeated in Week 4 of the season. Brent C. Wagner updates the ratings.

Lincoln Pius X's Abby Vacek slide-tackles the ball away from Lincoln Southeast's Kylee Kurtzer in the second half Monday at Pius X.