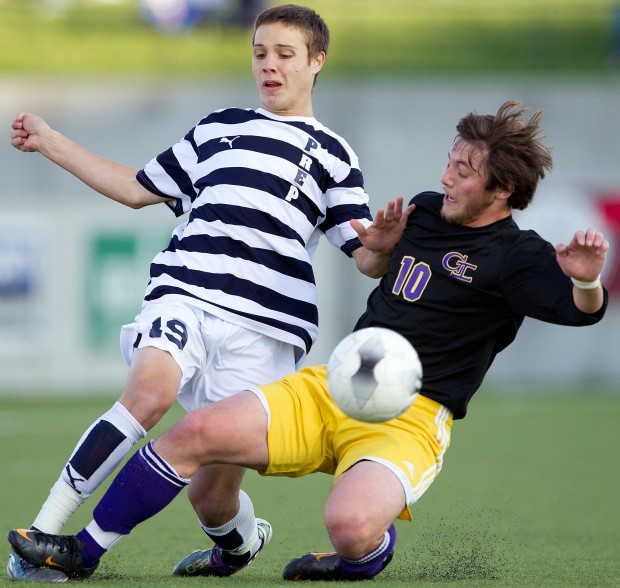 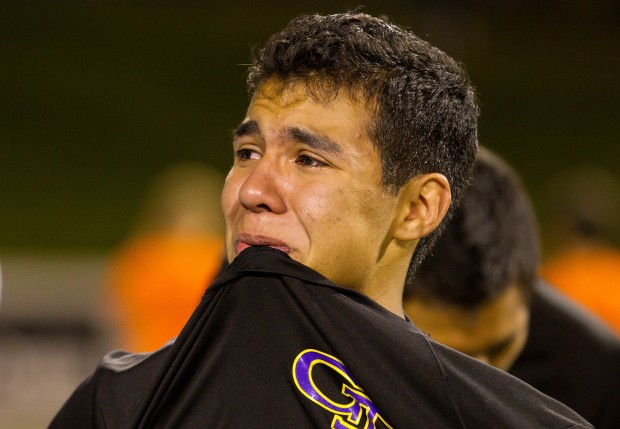 Grand Island's Lucas Venegas reacts to the Islanders' 2-1 loss to Creighton Prep in the Class A state title game at Omaha's Morrison Stadium on Monday, May 16, 2011. (REBECCA S. GRATZ/THE WORLD-HERALD)

Too many good teams, too many odd tournament matches, too many deflected balls that can cost the team that controlled the match a win.

Yet, for the second time in two years and fourth time in six years in Class A boys there is an unbeaten champion. On Monday, Creighton Prep completed the perfect 20-0 season with a 2-1 victory over Grand Island in the first ever boys finals matchup of unbeaten teams.

Lincoln East was perfect in 2006 and 2010 and Millard North in 2007. In the first 18 years of soccer in Nebraska there were no unbeaten Class A champs. Lincoln East and Creighton Prep were tied for the most boys state championships, but the Junior Jays pulled ahead with title No. 7 on Monday.

Prep won Monday on a goal by Mark Moulton Jr. with 12 minutes remaining in the match.

Chuma Nnawulezi set up the goal by splitting the defense in the middle of the field before passing to Moulton on the left side. With his first touch, Moulton lost another defender, giving him time to look where to aim. The sophomore midfielder chose far corner. Instead, the ball deflected off a Grand Island defender, catching diving goalie Tabo Vazquez off guard and slowly trickling into the net.

"It was gut-wrenching watching it go in," Moulton said. "I thought it was going to be saved at the last second."

Prep had scares during a perfect season, including an overtime match against Omaha South and needing late goals in other wins.

"Soccer is getting more popular in the United States, and as it expands teams get harder and harder to play, and it's that much harder to go unbeaten," Moulton said. "It takes a great team to do that."

Grand Island struck first seven minutes into the match. Logan Mendez perfectly placed a shot from 15 yards in front of the goal on a pass from David Torres.

Prep tied the match 10 minutes into the second half on a penalty kick goal by Paul Floersch.

The Islanders had won two matches with goals in the final 30 seconds this season, but they couldn't this time.

Grand Island coach Jeremy Jensen said his biggest fear was that his team would play well but lose on one bad play. He said he felt his team played OK, and Prep was better.

"Their goalie made two fantastic saves, one in each half off David Torres on shots that normal goalies don't get," Jensen said.

The unbeaten final didn't draw the crowd of 5,000 fans that showed up for Lincoln East vs. Omaha South last season, but it was another big crowd with fans lined up for over a city blocked to get into Morrison Stadium.

Fulfilling an earlier promise if Grand Island made the final, Jensen wore dress pants and a sports coat.

"That was the classiest team we've ever played," Prep co-coach Jim Swanson said. "There were (very few yellow cards), and in an incredibly competitive match like that I thought both teams acted with class."