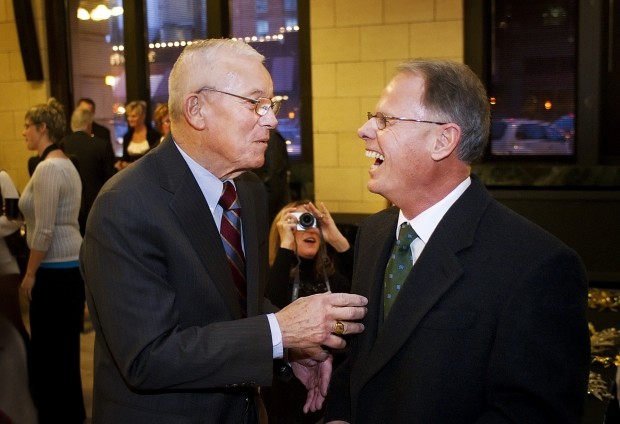 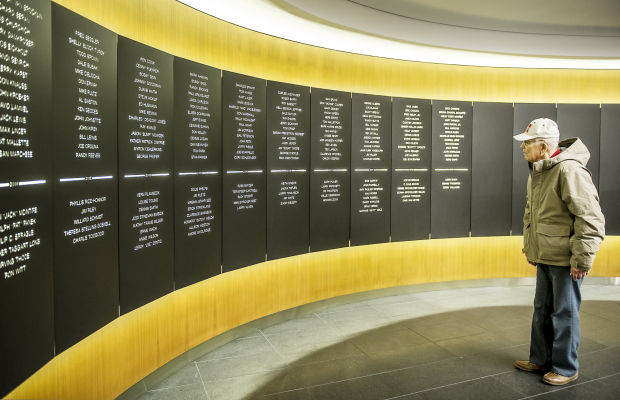 Longtime supporter of Nebraska high school sports, as well as a 2008 Hall of Fame inductee, Wally McNaught studies the wall of backlit etchings of hall of fame members on Monday at the Nebraska High School Sports Hall of Fame.

McNaught was named to the Nebraska High School Hall of Fame and also was recently honored by Lincoln Southeast’s Hall of Fame.

The longtime basketball coach was born in Polk and served in Korea during his time in the Army.

He is survived by his wife JoAnn, daughter Linda (Major), brother Bill, sons Pat and Tom, nine grandchildren and 12 great-grandchildren. Services are pending.

McNaught, who coached basketball for 36 years, was named the 1980 Ralph Beechner KFOR Coach of the Year and coached the Nebraska Basketball Development team in 1982. He was inducted into the Nebraska Wesleyan Hall of Fame in 1979. Both Wally and JoAnn are NWU grads. McNaught coached at Crete, Harvard and Omaha Bryan high schools.

He left coaching in 1985 to become athletic director at LSE and later worked with the Nebraska High School Hall of Fame.

In a December 2012 interview with the Journal Star, McNaught and his wife talked about his dealing with Parkinson’s and his treatments. He joked about how Forch had called his team’s style to control the tempo “Wallyball.”

“It drove (Forch) crazy, but that’s the way I thought we had a best chance to win,” McNaught said at the time.

He added, “There’s a perspective beyond winning that helps me over the rough spots. There are doubts and discouragement that go with the territory. But tomorrow you wake up and it’s a new day and you gain more perspective on how appreciative you should be in having as good a job as teaching and coaching.”

Stories of coaches from the LJS staff, readers and coaches in and around Lincoln.

Former Lincoln Southeast basketball coach Wally McNaught still has the build of the sprinter from Polk High and Nebraska Wesleya, but he is in a daily battle with Parkinson's disease.

Longtime supporter of Nebraska high school sports, as well as a 2008 Hall of Fame inductee, Wally McNaught studies the wall of backlit etchings of hall of fame members on Monday at the Nebraska High School Sports Hall of Fame.