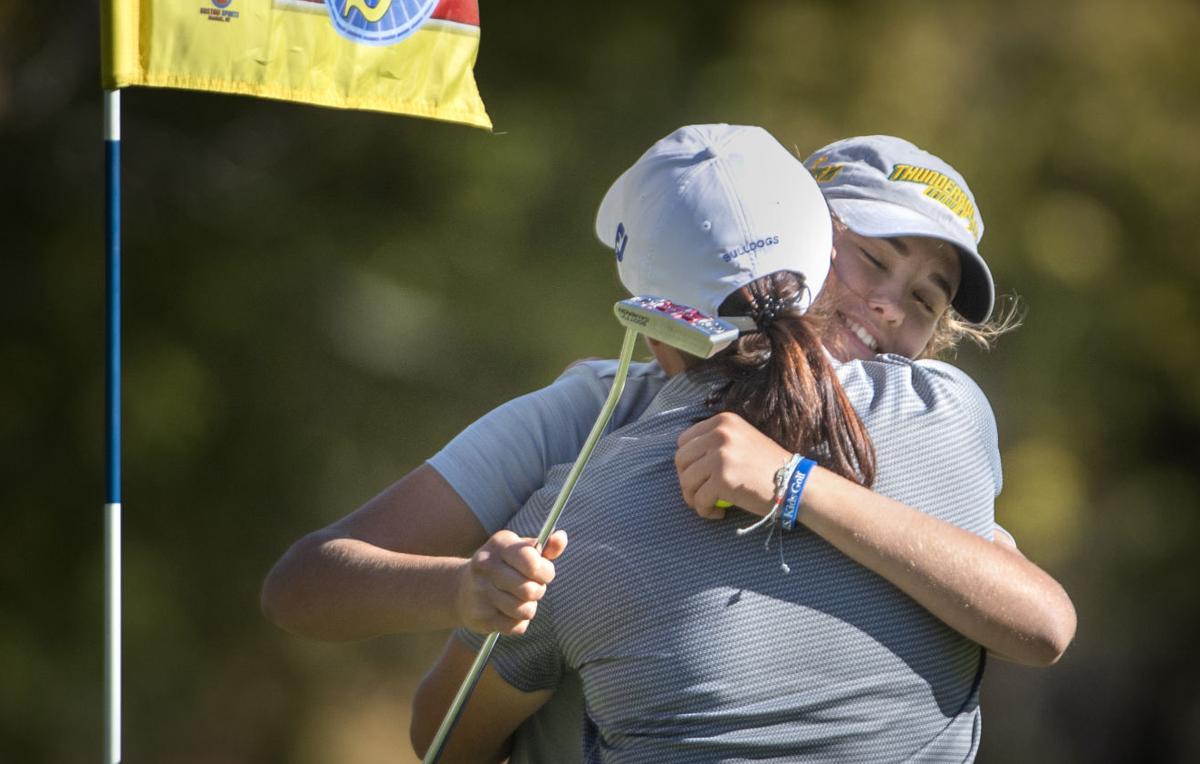 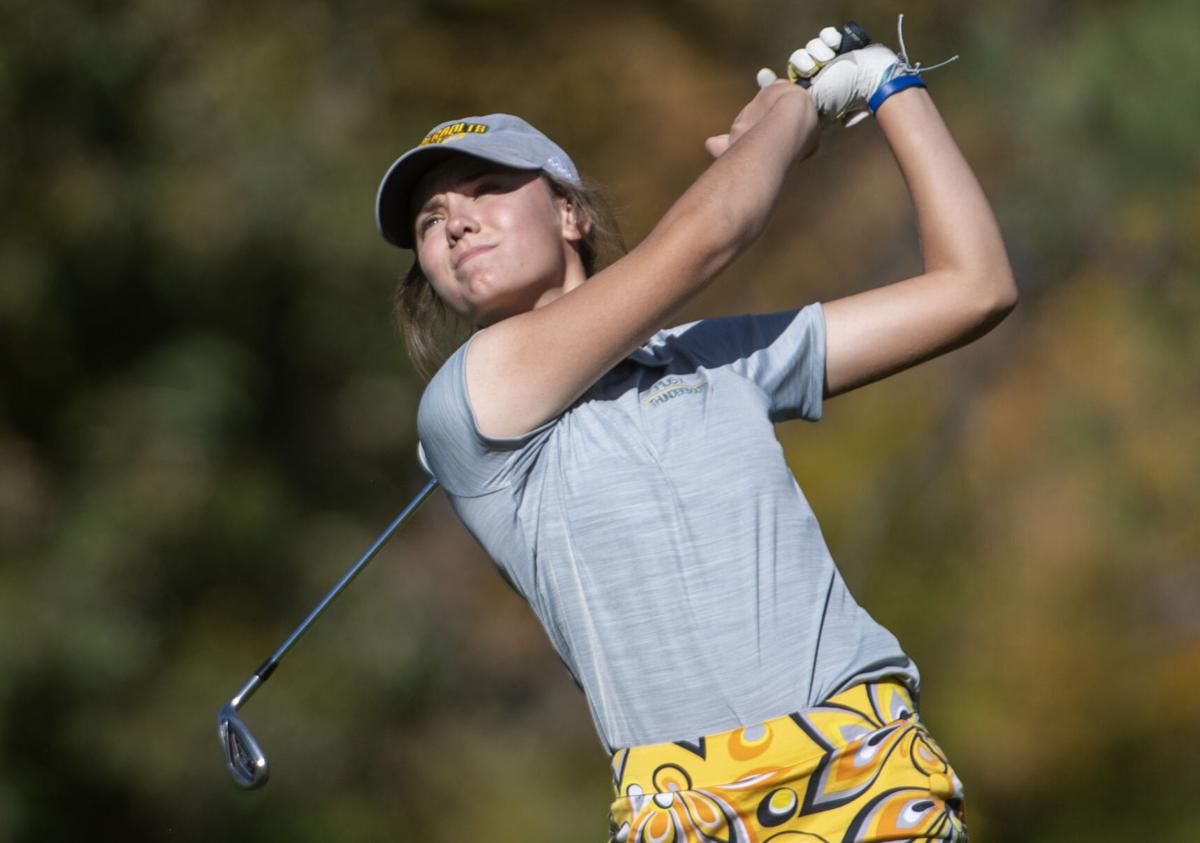 Lincoln Pius X's Nicole Kolbas tees off during the Class A girls state golf tournament at Norfolk Country Club in Norfolk on Oct. 13.

NORFOLK — After finishing off one of the great seasons in the history of high school girls golf in Nebraska, Lincoln Pius X sophomore Nicole Kolbas could only think of one thing.

"My geometry quiz is on my mind," Kolbas said minutes after winning the Class A individual championship.

The math was easy Tuesday. And it added up to one of the most dominant performances in state tournament history.

Scottsbluff in Class B, Broken Bow in Class C out to big leads at state golf

Kolbas made seven birdies, including three in a row to finish her round, on her way to shooting a 3-under-par 69 at Norfolk Country Club to win her first state high school title by a whopping 12 shots.

"Right now I'm just excited, and kind of all over the place because I can't believe that I did this," Kolbas said. "So, it's kind of surreal, and I'm blessed that I was able to do this, and just really happy."

Kolbas' two-day total of 140 set a new all-class scoring record, besting by two shots the 142 totals of Doniphan-Trumbull's Danielle Lemek in 2010 and Chadron's Ricki Hickstein in 2017. The Class A record of 143 was set by Millard North's Armana Christianson in 2007.

Kolbas' 69 Tuesday is the second-lowest score ever shot at state, behind a 67 by Lemek in 2011. Her 71 Monday means Kolbas has two of the four lowest scores in state tournament history.

And her 12-shot margin of victory is the second-largest in Class A since the tournament went to 36 holes in 1995. Lincoln Southeast's Beth Anne Cherry won by 16 shots in 2000.

"You always have to set your long-term and short-term goals. So for me, I worked really hard at my game in the offseason and summer, and I played pretty well during the summer. So my goal basically was to continue it into fall and have fun with it, because that’s all you can do in golf," Kolbas said. "I was definitely happy with the way I played. All the tournaments I did play in and shoot under par, was just kind of fun. I had fun out there, and that’s hopefully what I’m able to do during the summer next year."

Kolbas played 13 rounds in full-field events this season. She broke par in nine of them.

She was beaten by one golfer all season — North Platte's Baylee Steele shot a 68 to edge Kolbas's 69 at the end of August at the Kearney High Invitational at Awarii Dunes.

Steele was a member of the state championship team Tuesday as North Platte shot a two-day total of 660 to win by 23 shots. Pius X finished second in the team race with a 683 total.

Kolbas finished the year with 11 victories.

And her mom had a front row seat for the whole thing. Pius X coach Stephanie Kolbas was there to greet her daughter with a long embrace after her final putt dropped.

"I was tearing up coming down the 18th fairway thinking to myself, I remember carrying her when she was a baby, coaching at state tournaments. And now, I'm walking down a fairway with her and ready to congratulate her on a state title," Stephanie Kolbas said. "It's surreal. It's a special moment to coach your kid and have them perform under pressure and finish strong."

"I'm not surprised to see the improvement our team made. Coming to state I was thinking, 'If we finish top three that would be awesome, and that would be a good goal for us,'" Stephanie Kolbas said. "Second is outstanding for where we started the season. We just kept climbing the leaderboard. Those girls worked hard and they earned it."

Photos: Sights from the final round at the girls state golf tournament in Norfolk

A look at results from the first day of the girls state golf tournament on Monday.

The Class B individual title had to be decided in a playoff — and Abbigail Brodersen's big day leads Boone Central to a Class C triumph.

Check out at the top girls golfers from the Capital City this past season.

Lincoln Pius X's Nicole Kolbas tees off during the Class A girls state golf tournament at Norfolk Country Club in Norfolk on Oct. 13.